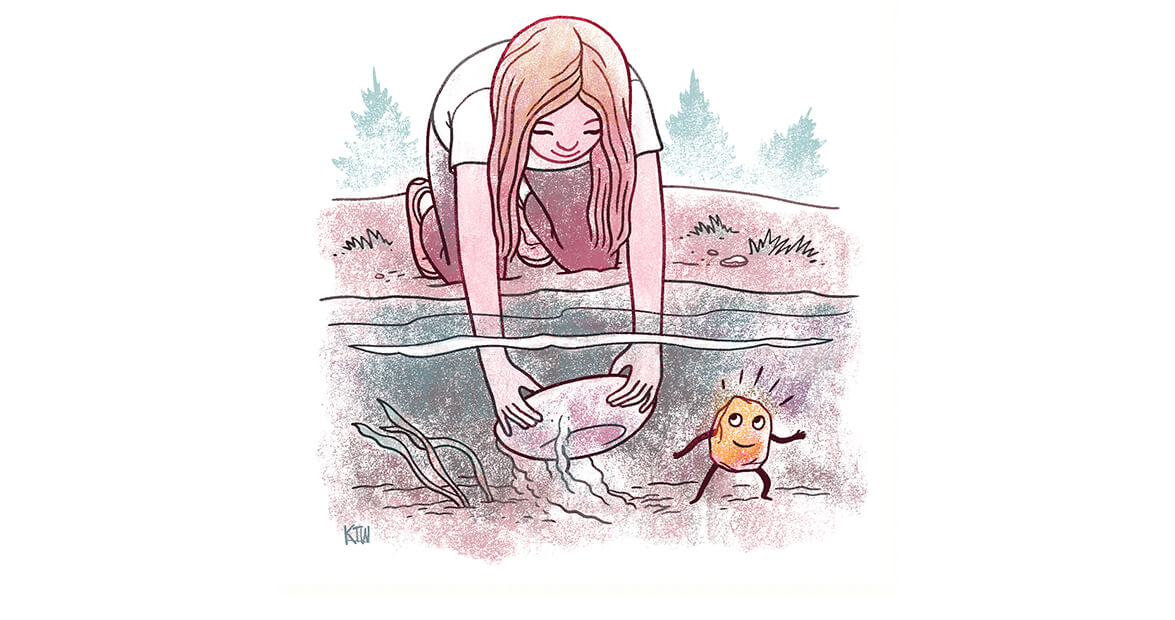 Gold doesn’t think. Any 5-year-old knows this, and she’s more than willing to point out that fact — especially if there’s an opportunity to show she knows something her father doesn’t. At least that’s the case when I proffer, on a gold-panning excursion with Casey, my then-5-year-old daughter, that “to find gold, you have to think like gold.”

We’re in the Uwharrie National Forest, shin-deep in Betty McGee Creek. The creek carves switchbacks through the old Thornburg farmstead, bisecting a hiking trail past an abandoned  farmhouse. In spots, the creek is deep and wide, but mostly it consists of ankle-deep rapids that riffle around mossy stepping-stones. It’s spring, and the water is cold and fast — conditions gold should enjoy.

This is an area of the state that gold likes, too: Here, mine shafts pepper the woods and stories abound of America’s first gold rush beginning here with the discovery of pound-size nuggets. In honor of the abundance of gold in the state — if not, necessarily, in the stretch of creek where we’re standing — the state legislature named gold the state’s official mineral in 2011.

I’m convinced that, in addition to thinking like gold, we just need the right tools to find the gold.

Panning, as the name suggests, requires a pan, one that’s broad and deep, with sloping sides that are ridged to catch hidden bits of gold as stream bottom is swirled vigorously enough to pitch common stones, but not so violently as to sweep flakes and nuggets over the sides of the pan. To scoop up stream bottom, a trowel or a spade or a small shovel is also required, and I’ve packed all three, just in case. Also in the backpack are my trusty trail guide; a steel pry bar to heft large rocks out of the way; and, of course, a glass vial to safely carry all the gold we find.

I’ve read that all these tools are essential to finding gold. I’ve also read that the terrain here — a valley that cuts between a hillside of quartz and a hillside of shale — is where gold tends to hang out. And I’ve read that spring, when the ground thaws and heaves, and creek sides are scrubbed by ice and rain, is the time when gold is on the move downstream, seeking out calm water and eddies around the boulders and bends.

I’d read all this in books and in brochures and online. But I’m a dad. As far as 5-year-olds know, dads don’t read about things, they just know about things. Then, when the time comes, we impart our knowledge in a nugget of wisdom that makes us look brilliant and adds another swatch to our progeny’s memory quilt.

Shivering in the creek, I offer what I think is the distillation of everything I know about panning for gold: “You know” — long, dramatic pause — “to find gold …”

I realize that I’m not the originator of the whole “think-like-whatever” philosophy of finding, catching, or winning something. In fact, I’m pretty sure dads have been espousing similar semi-wise sayings since time immemorial. (“To build a pyramid, you have to think like a pyramid!”)

Like Casey, I, too, was 5 when my father introduced me to the “think-like-whatever” concept. In my case, the “whatever” wasn’t gold. It was a fish.

On a June day at dawn, Dad and I were balancing on a muddy log on the muddy bank of some muddy lake far from our cozy suburban ranch house, where Mom was still sleeping. Dad had lugged out the poles and the tackle box and the wriggling worms in the little Styrofoam tub that still smelled like the greasy Sunoco station where we’d stopped for bait and a Dr Pepper (for me) and a paper cup of coffee (for him). As we stood lakeside in the damp chill of dawn, watching our bobbers not bob, Dad sipped his coffee, looked out across the lake, and said, “You know” — long, dramatic pause — “to catch a fish …”

Suddenly, fishing made sense. Getting up in the middle of the night. Trudging through the mud. The coffee. Everything. I knew in my heart that if I could think like a fish, I could catch a fish. It was so simple.

Naturally, we didn’t catch a single fish. After a few hours, we let the worms go to fend for themselves on the bank, went home, and put the tackle box on a shelf in the garage, where it stayed until after Dad’s funeral that fall. (Dad’s death was sad for 5-year-old me, but his dying wasn’t sudden or unexpected — the same disease that killed him also killed his dad and his dad’s dad.) In retrospect, I don’t think he ever really wanted to catch a fish that morning. He just wanted to prove to me that he knew how to catch a fish.

As I shake and slosh a pan full of pebbles in Betty McGee Creek, Casey tries to catch a frog among the water lilies. For a second, I consider telling her that “to catch a frog, you have to think like a frog.” But I resist.