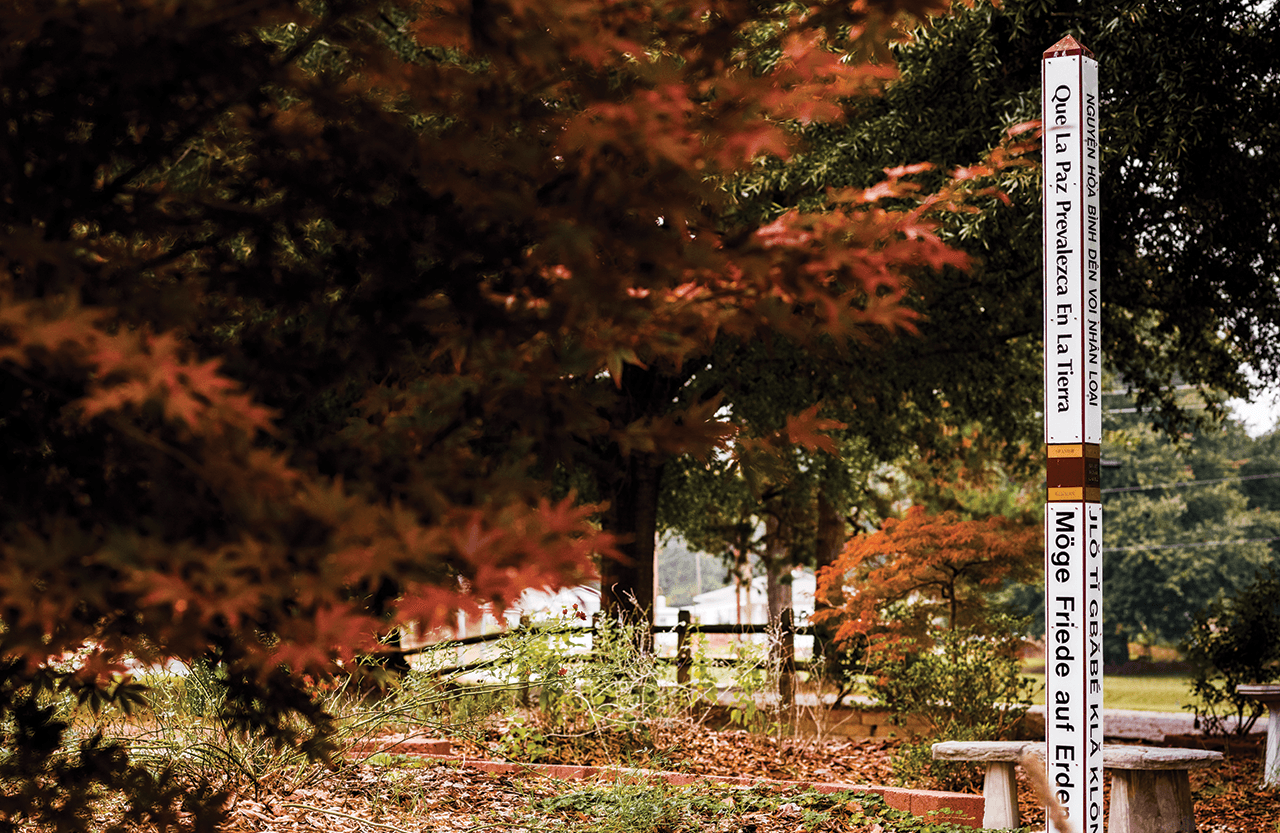 It’s hard to resist sneaking a peek at “Fame.” The bronze goddess depicted in the monument stands 23 feet tall from the base of the statue’s pedestal to the tips of her wings. Strong and beautiful, she holds a laurel wreath high in the air with one hand, her other supporting a Confederate soldier. Her face is smooth and calm, her gaze down the town’s main street somehow reassuring, like that of a guardian angel.

On a walk to Salisbury’s Bell Tower Park from downtown, the Rev. Chief Fleming Otey shares the statue’s backstory without breaking stride: Known more commonly as the Confederate Memorial, it was erected by the United Daughters of the Confederacy over 100 years ago, and it has divided traffic on West Innes Street ever since.

Otey, a retired chaplain at the nearby VA Medical Center and chief of the Yadkin River Valley Cherokee Indians, has the time but not the desire to elaborate more. Along with Betty Jo Hardy and several fellow pastors — all members of the Rowan County’s Covenant Community Connection (CCC), the group that spearheaded putting peace poles in the county’s parks — Otey’s on his way to talk about a less divisive and considerably less noticeable monument: Rowan County’s Peace Pole No. 2.

The seven-foot-tall brown cedar pole stands along the south edge of the quarter-acre park beneath a canopy of maples and among a lattice of tree roots. The message “May Peace Prevail On Earth” is carved into the sides of the post in deep, black letters. Again and again. Two messages per side. All four sides. Eight times total in eight different languages, including Arabic, Spanish, Chinese, English, Hmong — languages spoken in local schools, or at least in the homes of students. The pole blends into its surroundings. It’s just visible from the street if you know what you’re looking for, but the simple monument with the simple message certainly doesn’t stop anyone in their tracks as they walk along West Innes Street. Basically, unless you’re seeking it, you probably won’t find it.

At the park, Otey, Hardy, and the other CCC members tell about the day in May 2008 when more than 100 people of different ethnicities, religions, and languages joined to dedicate Peace Pole No. 2 during Let’s Get Connected Day. They tell of the Muslim call to prayer, the ringing of the Buddhist bell to start the program, the prayer circle featuring a mix of languages and faiths, music, dancing, and Otey’s Native American blessing. They also share what the peace poles — there are eight of them in parks throughout Rowan County, including three in Salisbury — represent historically, and in the community. 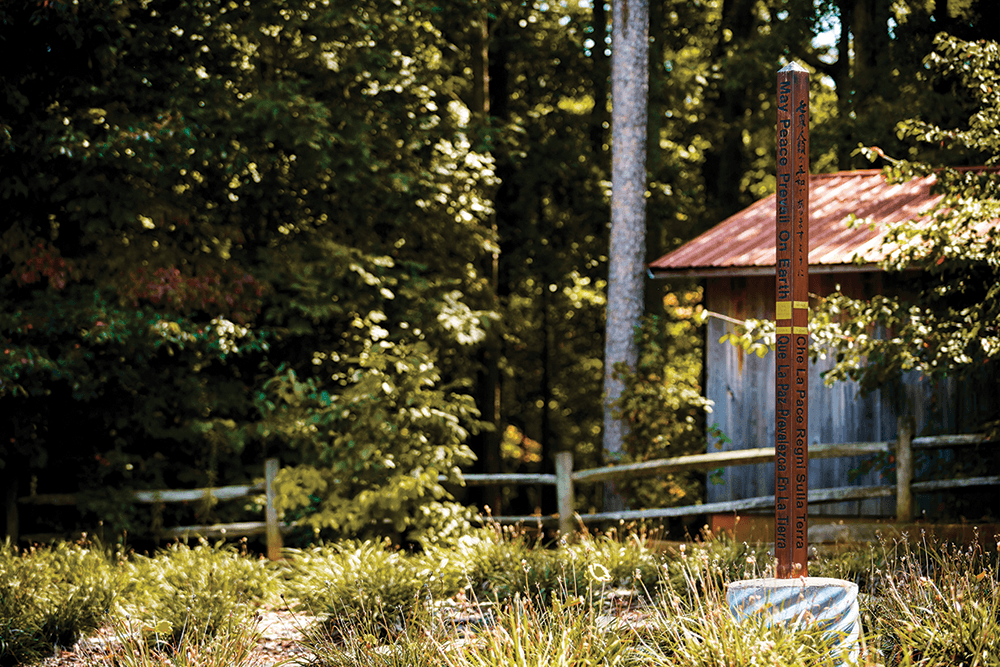 Japanese philosopher Masahisa Goi came up with the peace pole idea and the message, “May Peace Prevail On Earth,” in 1955 as a tribute to the memory of the devastation caused by the atomic bomb dropped on Hiroshima during World War II. Peace poles were exclusively found in Japan until 1983, when the Peace Pole Project took off internationally.

Today, about 100,000 peace poles stand in more than 180 countries, including a 52-foot-tall peace pole in Wisconsin and one at the North Magnetic Pole.

In North Carolina, Rowan County’s Let’s Get Connected Day is the only annual event to include a peace pole dedication. Locally, a connection to the peace pole’s origins is maintained with Japanese inscriptions of the peace prayer, and also at dedications. Last year, Otey’s wife, Yoshiko, read a Christian prayer in Japanese during the dedication of the pole in Granite Quarry’s Granite Lake Park. Yoshiko was a girl living in Tokyo during World War II.

In Bell Tower Park, Betty Jo Hardy is surprised, and frankly a little disappointed, by the condition of Peace Pole No. 2. She inspects the pole like it’s her child. The lacquer on the side facing east has started to peel. The flaking finish is barely noticeable, but Hardy notices. Throughout the years, she’s been more involved in the project than most. As Pastor Henry Diggs notes, that while “there are no big I’s, just  little u’s” in this Peace Pole Project, Hardy’s passion has been contagious, and enduring. After the group’s eighth pole dedication in Granite Lake Park, Hardy thought the peace pole project had run its course. Then the call came from East Spencer about the possibility of a ninth pole in Royal Giants Park. So Hardy enlisted the help of her fellow CCC members, and the project continues.

As the name suggests, Peace Pole No. 2 wasn’t the first peace pole in Rowan County. The distinction of being home to Peace Pole No. 1 belongs to Salisbury’s City Park. Dedicated in 2007, at a time when global tensions were high and the U.S. was at war, there were concerns locally that a wooden post sporting a bunch of foreign languages might wind up a target for vandals. County officials and the CCC weighed options and decided that the opportunity to bring together neighbors of different cultures and religions and languages was too great to pass up. But to play it safe, the inaugural peace pole next to the park’s shelter No. 1 would be an aluminum pole instead of the more traditional cedar. That spring, more than 100 people turned out to dedicate the pole. Prayers from many faiths were said in many languages. Doves were released. And people waited for the vandalism. And waited. The vandalism never came. In fact, none of the county’s peace poles — six cedar and two aluminum — have been damaged by anything but the elements.

Which still doesn’t mean Hardy is pleased by the look of Peace Pole No. 2. As she picks at the tiny flakes of lacquer, she says she may call the manufacturer to see if they can fix it. Otey and some others in the group smile. They know that if Hardy wants something done, it’ll get done — no fanfare, no fame.