You rent a beach house for the week, and you know the drill: Stop by the local grocery for a few perishables — beer’s a perishable, right? — figure out the closest fish market for fresh shrimp, and get ready for a week of simple meals.

If your rental is in the town of Oak Island or next-door Caswell Beach, though, you need to add a stop: the Old Bridge Diner, right next to the G.V. Barbee Bridge, to grab a quart of clam chowder. If you’ve got a big group coming, consider a gallon.

You can thank us later. It’s some of the best clam chowder this side of New England, and it’s the perfect thing for fast lunches when you come back inside with salty hair and sandy toes. It’s so good, you could probably eat it cold. 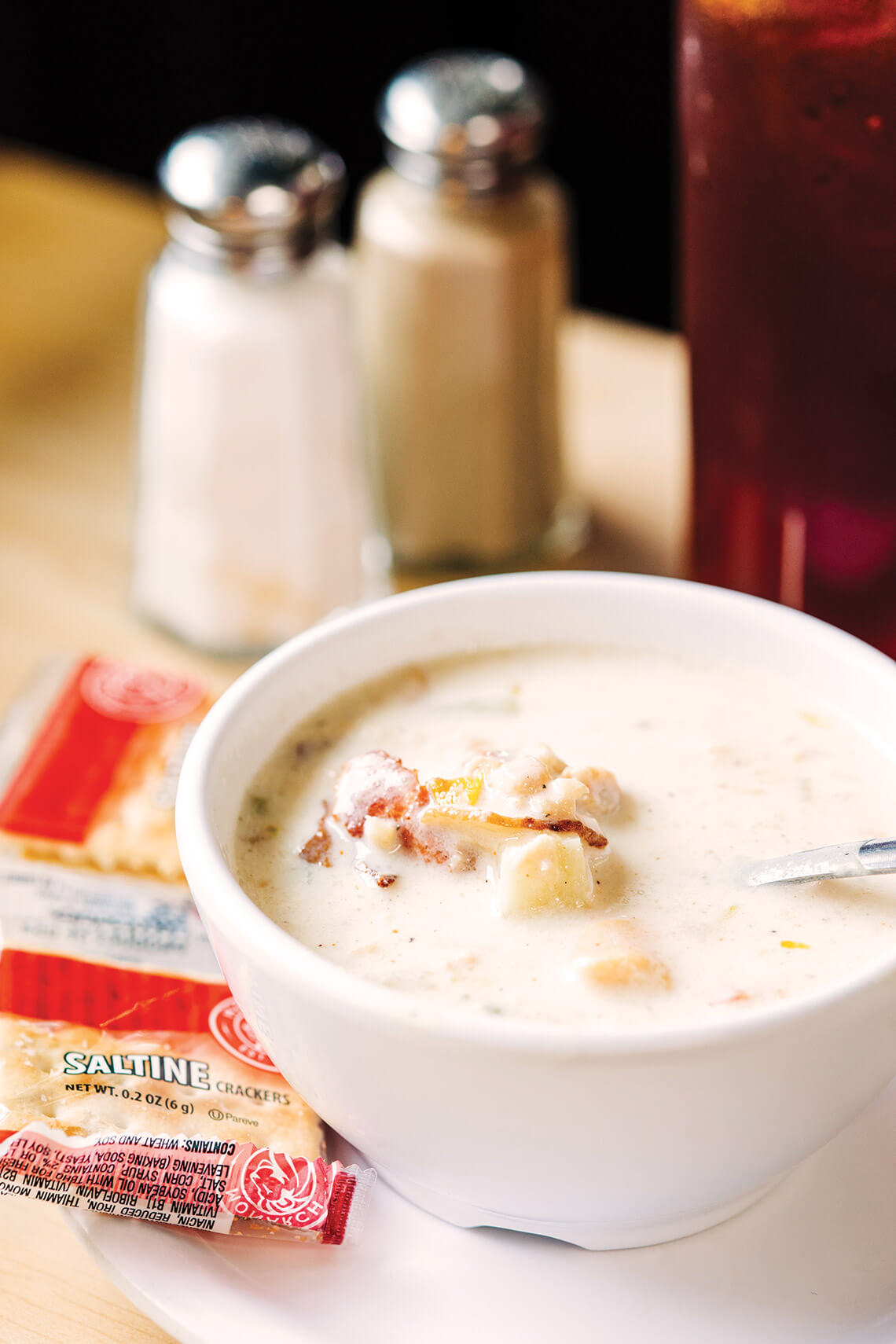 Michael’s famous clam chowder is simple, classic, and so good that the Old Bridge Diner serves it year-round. photograph by Matt Ray Photography

Michael Jones owns the Old Bridge Diner with his wife, Breanna. These days, she’s staying home with their 2½-year-old and 11-month-old, so Michael is holding down the spatula on his own.

The Old Bridge is the spot for beach-morning breakfasts and lunches, a classic diner with a fauxtin ceiling, a quilted chrome backsplash, and a long counter (partially blocked off right now, thanks to the pandemic). It’s the kind of place where regulars take over a corner booth to hash out the world’s problems over hash browns and eggs or drop in to pick up a burger to go for lunch.

The time doesn’t matter, actually: Michael designed the menu to cover both breakfast and lunch from 6 a.m. to 2 p.m. daily. “You can get a cheeseburger at 6 a.m. or an omelet at 1:30 in the afternoon,” he says.

It’s the kind of place where regulars take over a booth to hash out the world’s problems over hash browns.

The Jones family came late to the restaurant world, but Michael can’t imagine doing anything else now. His dad, Bill, was a businessman who lived all over the world, doing things like building nuclear power plants. The family bounced around during Michael’s childhood — Atlanta, Canada, Connecticut, New Jersey.

Bill decided to retire to Caswell Beach in 2000, but he couldn’t just do nothing. So he made a deal to open a Holden Beach branch of Southport’s popular Provision Company and set up Michael’s brother Cory to run it, with Michael working for him in high school. Cory eventually added the Main Street Grill (since closed, although he still has the Holden Beach location of Provision Company).

Michael went to North Carolina State University for a degree in criminology, but he didn’t get the job in federal law enforcement that he wanted. In 2014, his father took him by to see the Old Bridge Diner building. “He said, ‘This place is a gold mine.’ My dad’s business mind never stops,” Michael says. “It was a diner, but it was closing. I’d never cooked breakfast before, but we said, ‘What the heck?’”

Michael and Breanna were dating at the time. Four months after opening the diner, he proposed — and they were soon a young couple with a thriving business.

Michael based his clam chowder recipe on a similar one at Provision Company, although Cory’s is fancier, with shrimp added. Michael’s version is simple and classic — a rich cream base loaded with fat clams, bacon, potatoes, and celery. It’s $3.95 for a bowl, $14 for a quart, and $45 for a gallon (call ahead for that). And yes, he sells gallons all the time.

The rest of the menu is filled with Benedicts, pancakes, waffles, burgers, sandwiches, and fried seafood. The popular Loaded Biscuit is an open-faced biscuit topped with two sausage patties, hash browns, Cheddar cheese, sausage gravy, and eggs. (You can get a half version, too, if you’re not planning to nap right after breakfast.)

The Joneses have struggled to make it through Oak Island’s recent setbacks, from Hurricane Florence and the closing of the Barbee Bridge for renovations in 2018 and 2019 to, of course, the pandemic. 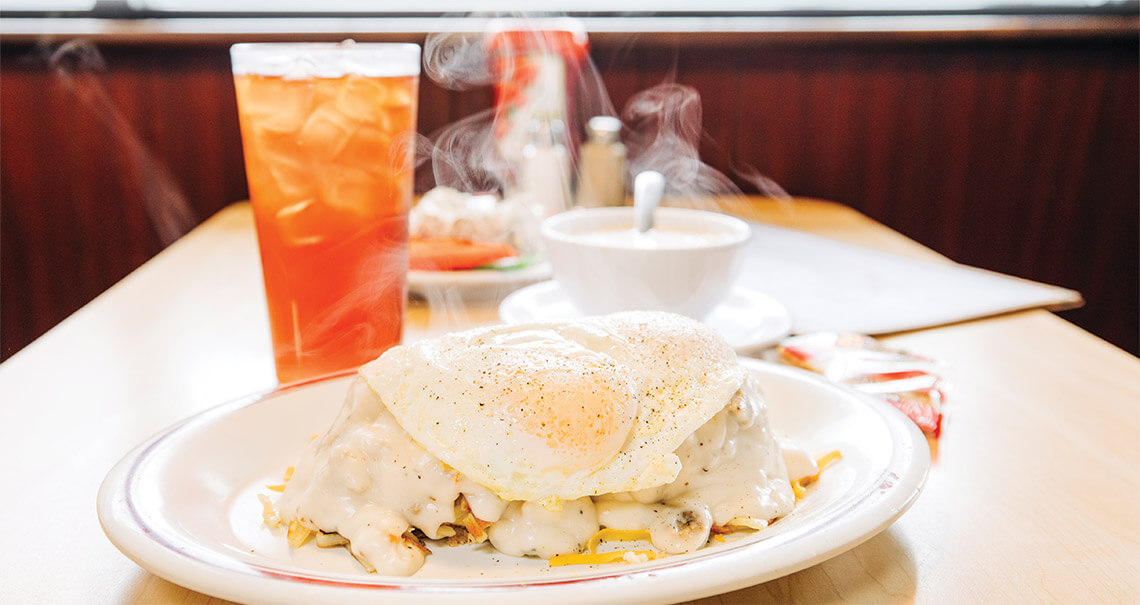 “The bridge was the worst,” Michael says. “It was closed for six months.” With the bridge on the east end of the island closed, regular customers from Southport had to drive 35 minutes out of their way to go down to the Middleton Boulevard Bridge on the west end.

During the pandemic, he had to lay off 15 of his 18 employees, but thanks to a busy takeout business, they were back to full staff by June. The morning regulars — fishermen and construction workers — are now back in full force.

“People ask me all the time about opening a second place,” he says. “No! Who would run it?”

He has no regrets about changing his life’s path to go into the restaurant business. If his kids grow up and want to go into restaurants, he says, “I wouldn’t push it — but I wouldn’t stop ’em. I think everyone should work in a restaurant at some point. Just to learn. Learn how people treat you, and learn how to treat one another.”