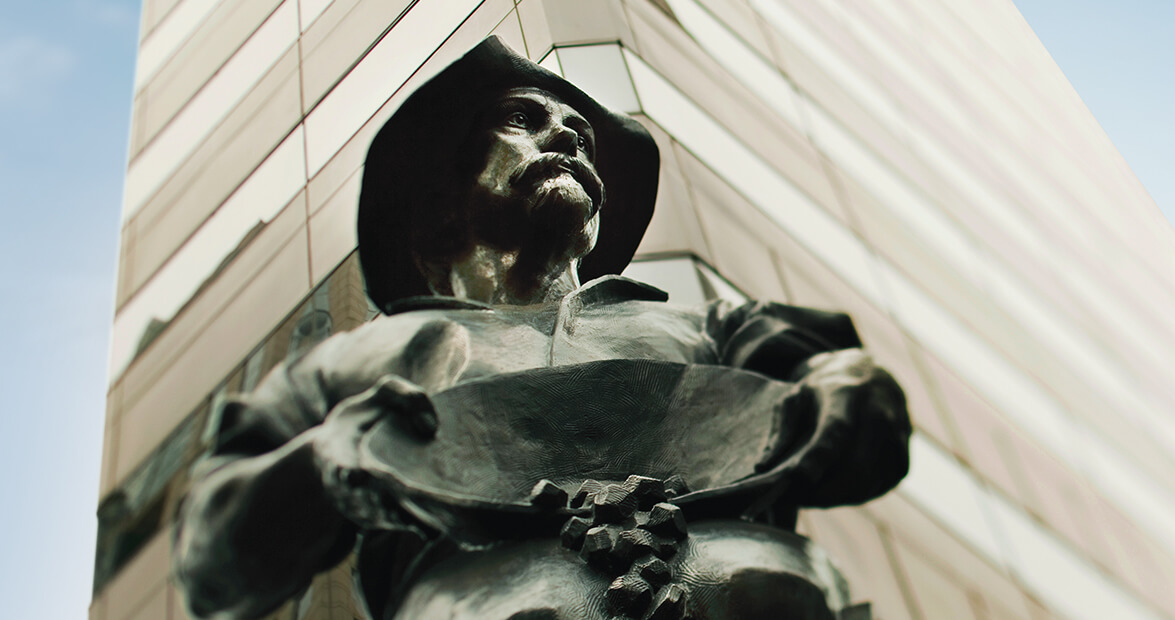 1. Try sitting at the corner of Trade and Tryon streets at quittin’ time. Here’s what you’ll see: men and women dressed in business casual, walking swiftly. Earbuds. Rolling briefcases. Guys with dreadlocks. Women already in workout clothes. The cars will be bumper-to-bumper, honking and crawling through the one intersection in Charlotte where nobody is allowed to make a turn, left or right. Everyone, in a car or on foot, picks a direction and sticks with it.

2. Ask Siri or Google Maps to give you directions to Charlotte without being specific, and both will lead you to this exact spot, the de facto center of Uptown Charlotte, where two Native American trading paths once crossed. (Note: Referring to this area as anything but “Uptown” is a minor crime here. Calling it “downtown,” however, is a felony.)

3. There are four bronze sculptures sitting atop pillars on each corner. Three of them — Transportation, Commerce, and Industry — face the fourth, named Future. The artist included all sorts of inside jokes. The baby being held by Future? That’s the sculptor! The bespectacled face below the gold-panning prospector representing Commerce? Former Chairman of the Federal Reserve Alan Greenspan! Charlotte: Where the bust of a central banker watches you jaywalk.

4. Looming over one corner is Bank of America’s 60-story headquarters. It was built on top of old gold mines, and construction workers found gold flakes while digging out the tower’s foundation more than 25 years ago. They stopped work and, in the following anecdote I just made up, licked their pickaxes like Yukon Cornelius to see if they were sitting atop the mother lode. Nothin’.

5. Across the intersection, teeny-tiny Thomas Polk Park is full of sharp-angled granite and corporate-looking waterfalls, but no benches. Trade and Tryon seem to have a Gordon Gekko feel. Walk by, and your hair gets slicker, your suit boxier.

6 blocks away, parking lots are turning into skyscrapers, and rapidly. Space is limited, so developers are building apartments on top of the Mint Museum and a hotel on top of the EpiCentre. Charlotte is growing so fast that people are building buildings on top of buildings that are already built. This is not Legoland, people. This is real.

7. Contrast this with 1993, when Charlotte Observer columnist Doug Smith walked the length of Tryon Street after 5:30 p.m. to see if he could buy a Snickers bar. (Spoiler alert: He couldn’t!) Back then, everybody fled the area after work. Today, people live and play within this intersection’s orbit. You can eat at a rooftop restaurant, sleep in First Ward, and walk to a Hornets game.

8. So, sure, while old buildings come down and new ones rise, the intersection of Trade and Tryon itself looks increasingly retro. That look won’t be permanent. Nothing in Charlotte is. A restaurant will open just steps from the corner, and another black-windowed skyscraper nearby is going to get a more inviting lobby — proof that people always want to be near the center of the action. The very center.