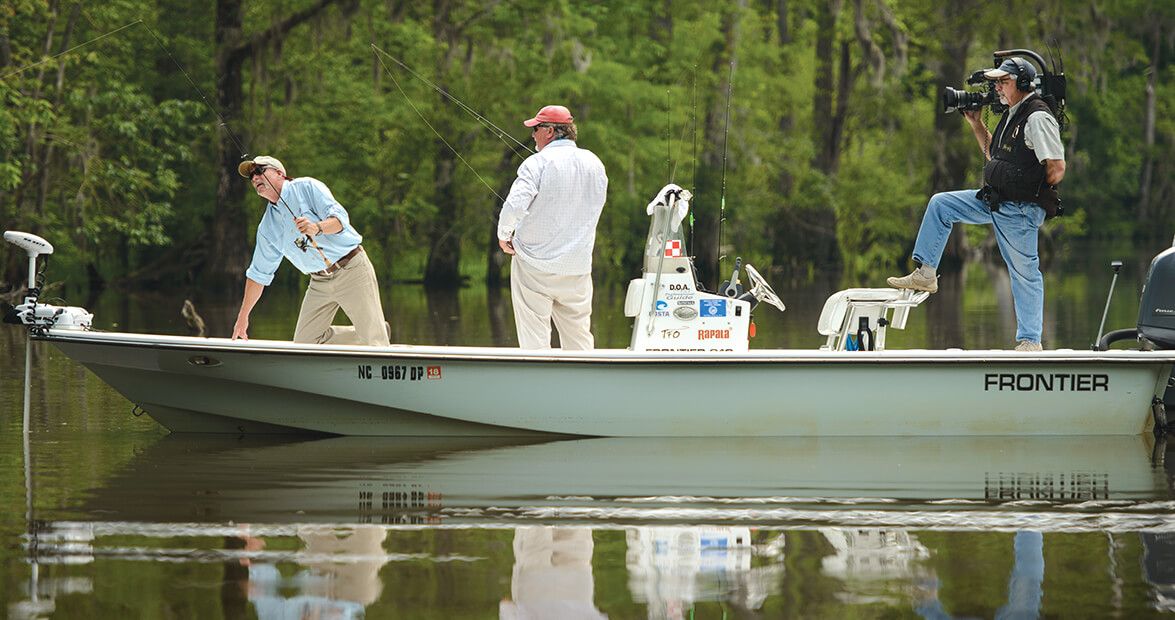 Joe Albea shoulders his high-definition video camera and sets his feet in the bow of a War Eagle fishing boat floating in the middle of the Neuse River. “Be talking to each other!” he calls out to fishing guide Gary Dubiel and fisherman Kurt Hinchman as they cruise toward him. “I want this to be an entry shot when we talk about the type of gear and what we’re fishing for.”

It’s barely 8 a.m. and the sun is slowly burning off the morning chill. Albea is on the river to shoot an episode of Carolina Outdoor Journal, UNC-TV’s premier outdoor series, which has educated anglers on fishing North Carolina’s coast and waterways since 1993. Albea has directed, produced, and filmed all 23 seasons, and in that time, he’s learned that fishermen are far easier to direct than fish.

Hinchman and Dubiel glide by, talking about the real star of the episode: the speckled sunfish known as black crappie. But the shot isn’t good enough. When they’re out of the frame, Albea tells them to come back again.

“You’ve got to put a little Hollywood in it, but not much,” he says, positioning the camera for another take.

There is very little Hollywood in Carolina Outdoor Journal. Each episode opens with an introduction from Albea and cohost John Moore, and a cooking demonstration from Donna Reynolds, both filmed on a Raleigh soundstage. But the backbone of the show is a mesmerizing half-hour of, well, fishing. The show’s genius comes from its simplicity: just two fishermen in a boat, talking fish and swapping gear tips. Like any fishing trip, you never know what might happen, but one thing is certain: Somehow, some way, they’ll catch some fish.

With the second take in the can, Dubiel and Hinchman cast their lines into the river’s bourbon-colored water. Just 20 minutes from downtown New Bern, the city seems far away as they fish one of the prettiest places in southeastern North Carolina. The click of the reel joins the throaty call of a woodpecker and the low croak of a bullfrog as the only sounds on the river. 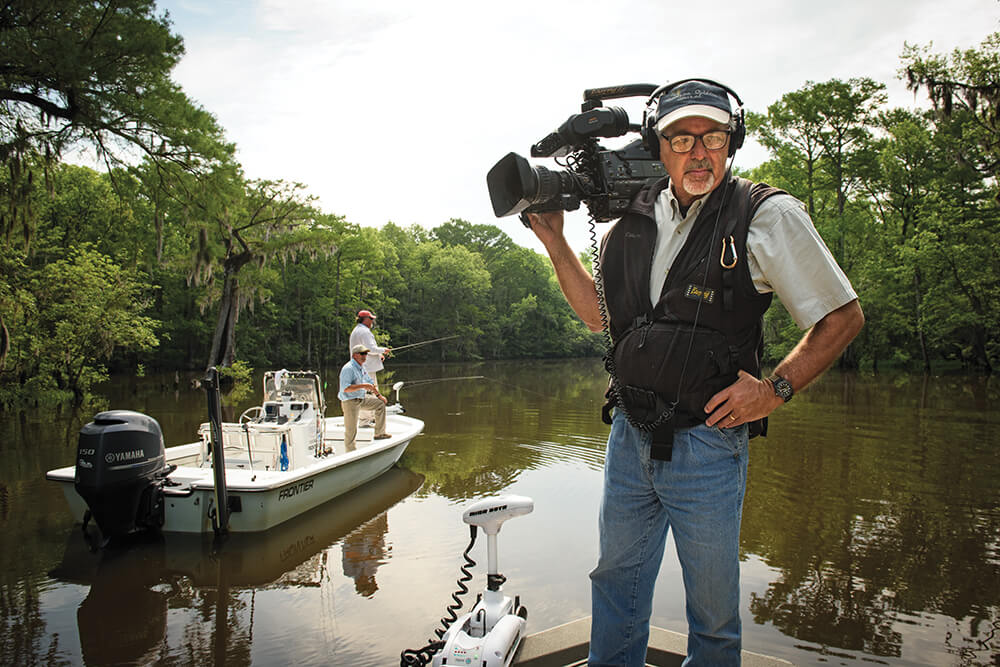 Joe Albea, creator and director of Carolina Outdoor Journal, looks for bites on the Neuse. photograph by Andrew Craft

Albea sits on the stern of Dubiel’s boat with the camera in his lap. He is lean with a short-sleeved fishing shirt and a ball cap pulled over his gray hair. Dubiel, a regular on the show since 2010, hooks the first fish — a black crappie — after a few casts. As he starts to reel it toward the boat, Albea is already on his feet, camera aimed at the line when the fish breaks the surface. Dubiel holds it up for a close-up, then tosses it into the cooler.

“That was a nice crappie,” Albea says. “That’s what we’re looking for. You get six or seven of those, and I’ll be happy.” He goes into each trip with a rough edit of the show in his head. He knows the shots he needs and how many fish it will take to get them. But no matter how much he plans, the fish get a vote.

After a couple of hours on the Neuse, Albea has sat more than he’s shot. Cast after cast comes back empty. By midday, he’s renamed the show “Tough Morning Crappie.” No longer focused on one type of fish, he’ll take anything with gills. “I really thought we had a perfect morning to showcase what we do,” he says. “Mother Nature is a great partner most of the time.”

Fishermen often ask Albea what it takes to get on the show. The qualifications are straightforward: “Can you catch fish?” It’s a simple question, but everything rides on the one-word answer: No fish. No show.

When Hinchman signed on to the show 30 episodes ago, he didn’t expect it to feel like work. “I didn’t realize the pressure,” he says. “You try and fish hard and make it worth it.”

On days like this, the clock is working against you as much as the fish. After eight hours of casting into the brown water with no break, Hinchman and Dubiel are worried that this episode could be a bust. Albea won’t air a show if he doesn’t get what he wants. Carolina Outdoor Journal isn’t like the bigger productions, which shoot over several days and edit the footage to create the illusion of one trip.

“We don’t stick fish on the end of a hook and then bring them back in,” he says. Unlike fishing programs that stage catches, everything on Albea’s show is authentic — the joy and the disappointment.

Despite the tough conditions, Albea remains calm. Even though the show in his head is being recut with each empty line, he is exactly where he wants to be. He’s fished North Carolina from creeks to coast and knows more about rivers and fishing than most anybody in his native state. Born at the naval hospital in Cherry Point, he grew up in Greenville with hopes for a career in the outdoors. It’s a rare thing to live the dream, and he doesn’t take it for granted.

He got his start shooting fishing and hunting videos for Franc White’s The Southern Sportsman. After two African safaris and eight trips to Alaska to hunt moose, brown bear, and caribou, he started his own production company in 1991. When UNC-TV was looking to do statewide programs, Albea pitched Carolina Outdoor Journal.

The series featured hunting and fishing at first, but in 2004 the show switched to just fishing, and started shooting in high-definition. After giving thousands of fish their due, it’s a challenge to keep topics fresh. “I’m getting close to topping out on subject matter,” Albea says. “I don’t want to repeat anything, but I still have many shows left to shoot.”

By midafternoon, the crappie still aren’t biting. Heck, nothing is biting. Dubiel is out of secret fishing spots, so they head back to the day’s first stop. They begin to cast, and — finally — Dubiel gets a bite. Hinchman watches, more in relief than admiration, as Dubiel hauls in a good-size crappie.

“It’s a pretty unusual day,” Hinchman says, reeling in yet another empty line. “We catch a fish that size, we should be able to throw it right back and catch four or five more.” Instead, that one goes into the cooler for Hinchman’s supper. Dubiel and Hinchman end up catching eight black crappie, one bluegill, and one chain pickerel. The haul is enough to save the show, but just barely. “It was a pretty day on the water, but a tough day of fishing,” Hinchman says.

Back in Greenville, Albea and a video editor pare down the footage into half an hour of fishing. A little Hollywood magic dispels the pressure and frustration they’d felt on the water. “We would have preferred eight big black crappie, but it worked out that you witnessed a really tough day of fishing,” he wrote in an email a few weeks later. “And two really good fishermen.” Slack lines or not, Albea is glad to endure a trying day of fishing so that his armchair anglers might enjoy an easy one.

The episode featuring black crappie will be broadcast throughout November. Check your local UNC-TV listings for show times.