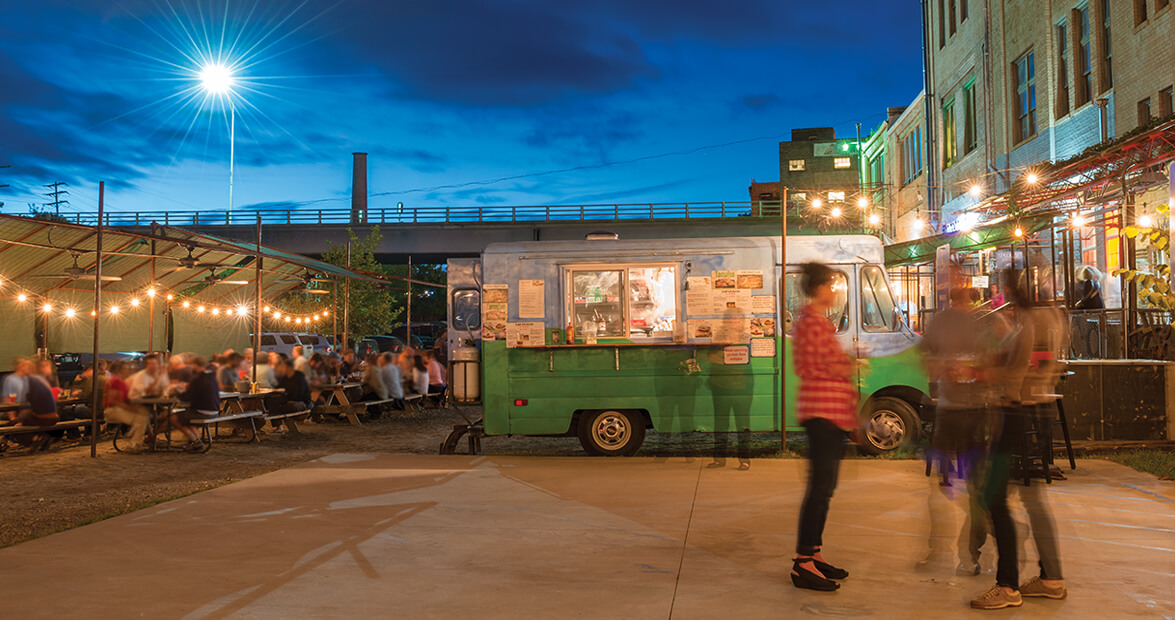 These days, the cutting edge of culinary has four wheels. At farmers markets, breweries, business parks, festivals, rodeos, reunions, and weddings, food trucks park, plug in, open their window, and serve everything from pork belly to waffles. 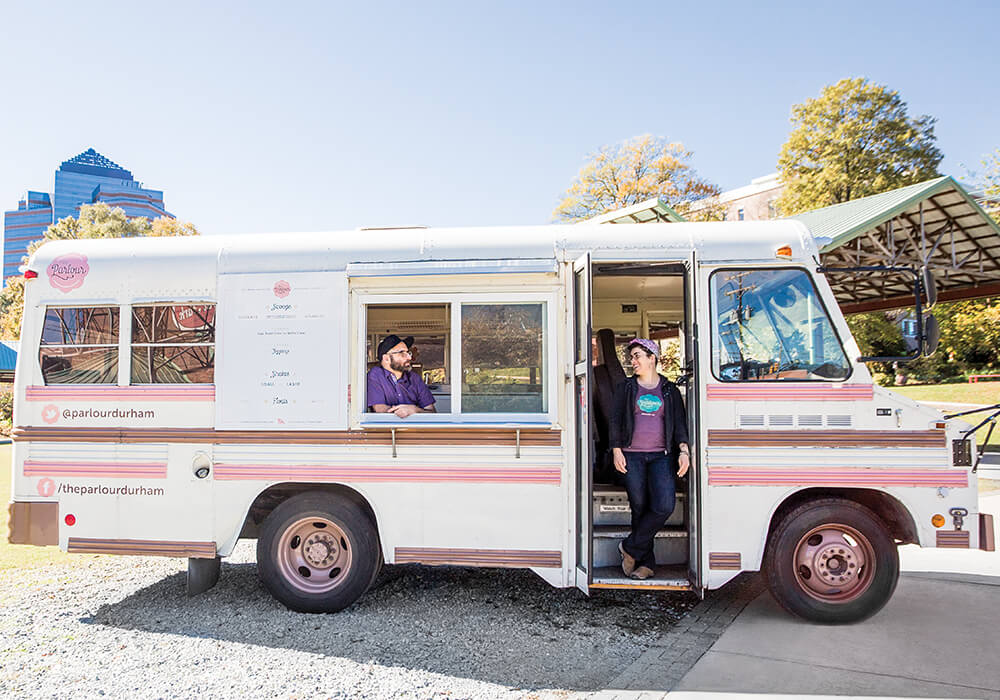 Do the stripes on this converted mini school bus look familiar? But of course: They’re the pink, cream, and brown of that brick of Neapolitan ice cream you ate as a child. Owners Vanessa Mazuz and her husband, Yoni, serve up seasonal specialty flavors, as well, like sweet corn with berry swirl in the summer, and butternut squash come autumn. Everything in your cone or in your dish is made from scratch, including sundae toppings. 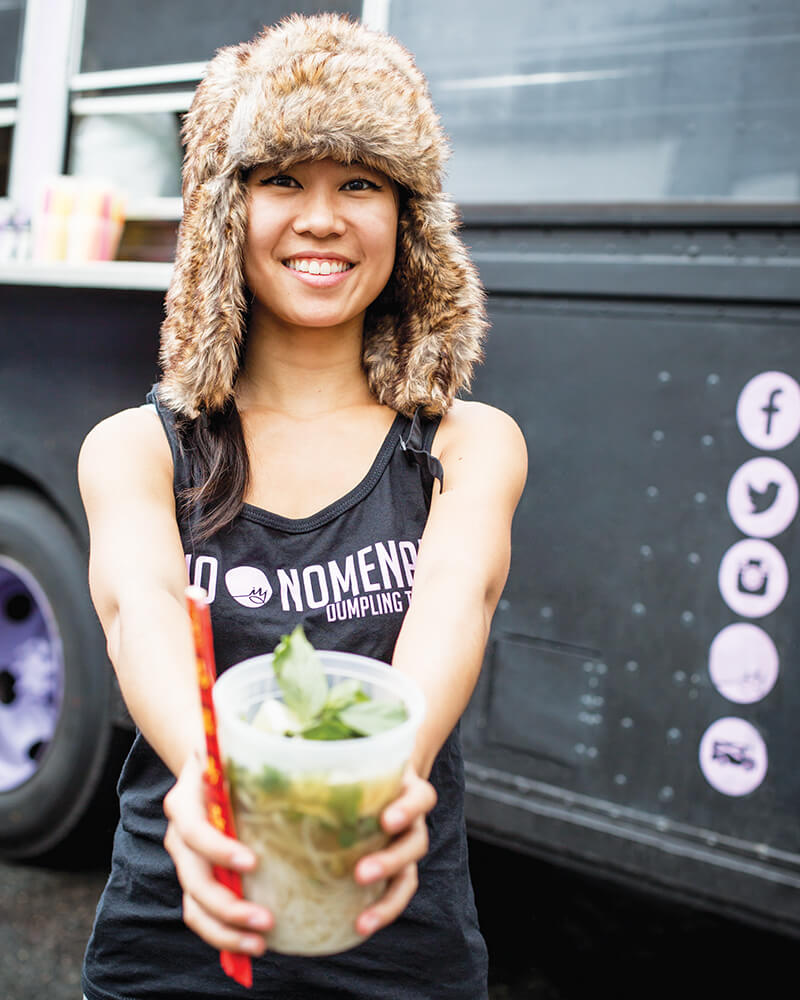 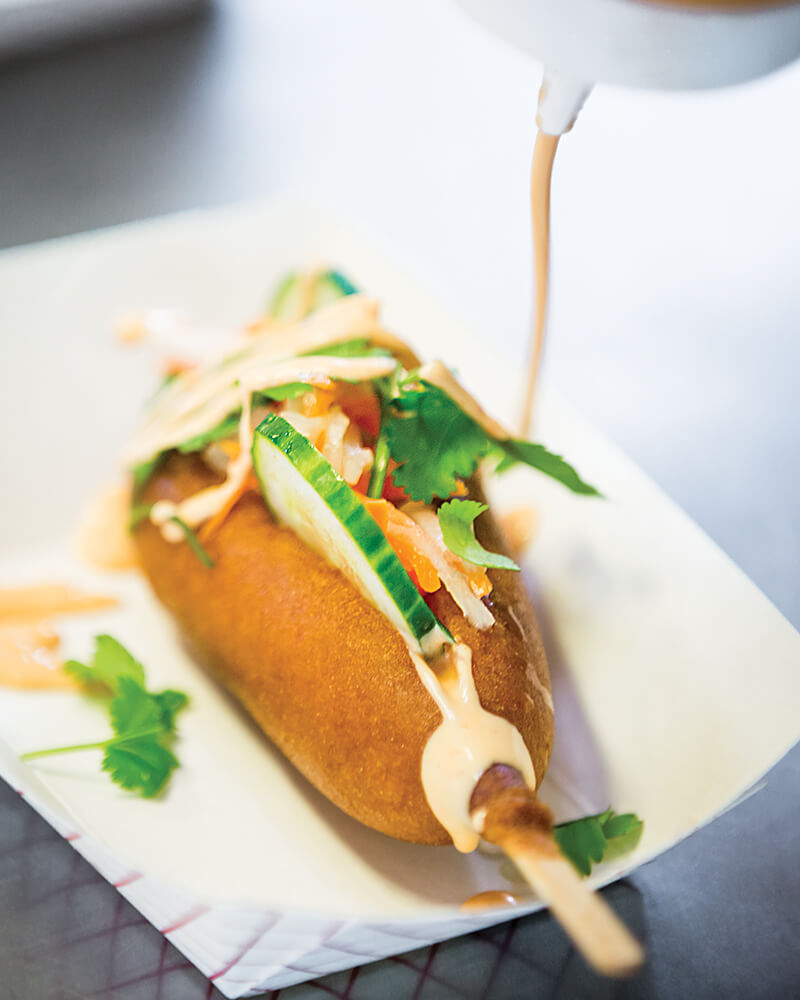 “No one liked seeing me when I was an accountant,” says Sophia Woo (left), a UNC graduate and owner of Pho Nomenal. “Now everyone’s glad to see me.” Woo teamed up with her friend, Sunny Lin — a former biomedical engineer and NCSU graduate — and the two serve Asian favorites with a Southern twist, like this corn dog Bánh Mì, to lines 50 to 60 people deep. “Yesterday, we made 1,000 dumplings,” Woo says. Their truck won 2015’s The Great Food Truck Race on the Food Network. “It’s been a wild ride,” Woo says with a grin. 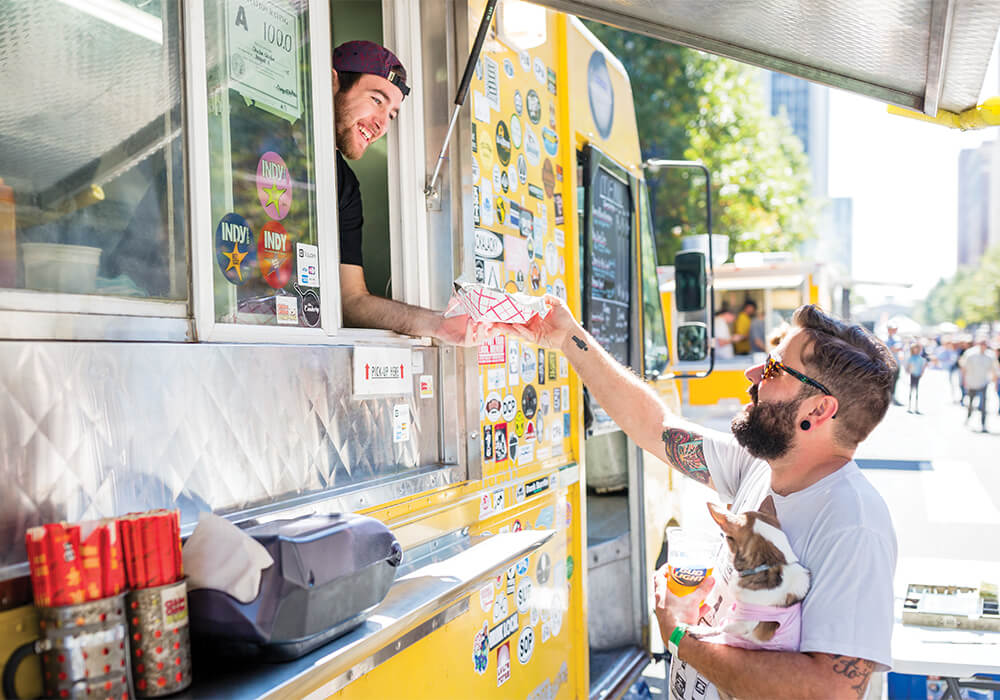 The son of medical missionaries, one of Chirba Chirba’s owners, Nate Adams, lived in Taiwan from the age of 4 until he returned to attend UNC, where he experienced “reverse culture shock.” Growing up, dumplings — steamed right on the roadside — were his favorite food, and that’s what Chirba Chirba serves all over the Triangle. “We get questions about Southern chicken ’n’ dumplings,” Adams says. “We tell people this is comfort food, akin to mac ’n’ cheese. That seems to work.” At left, Cody Lee mans the window. 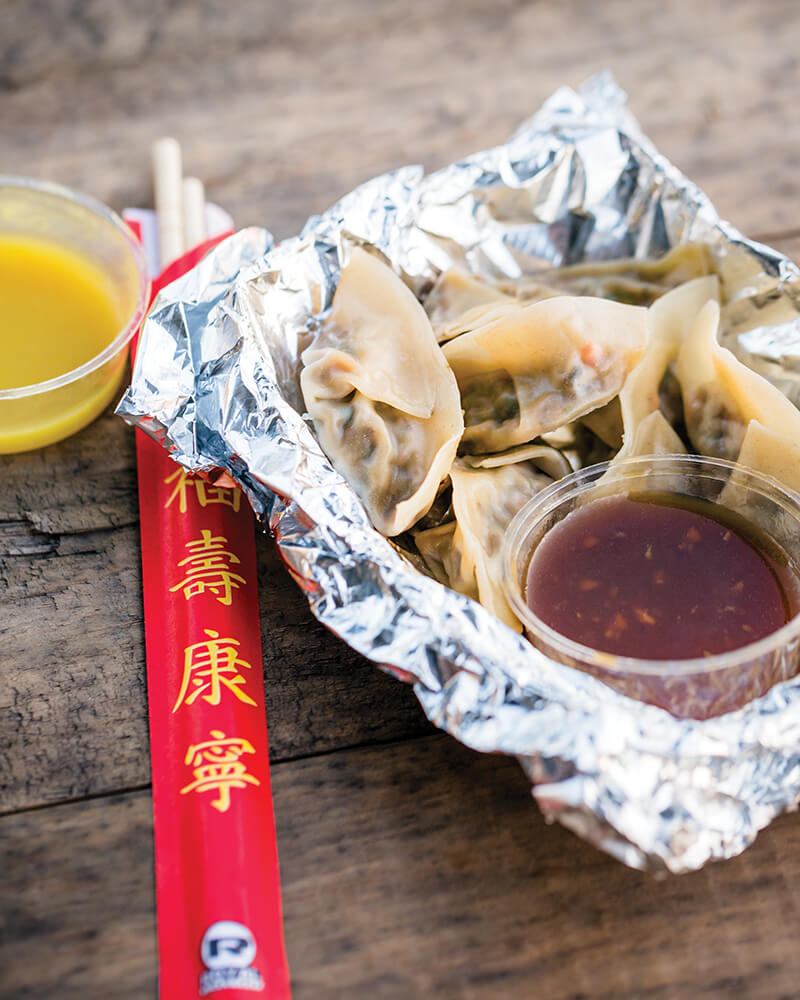 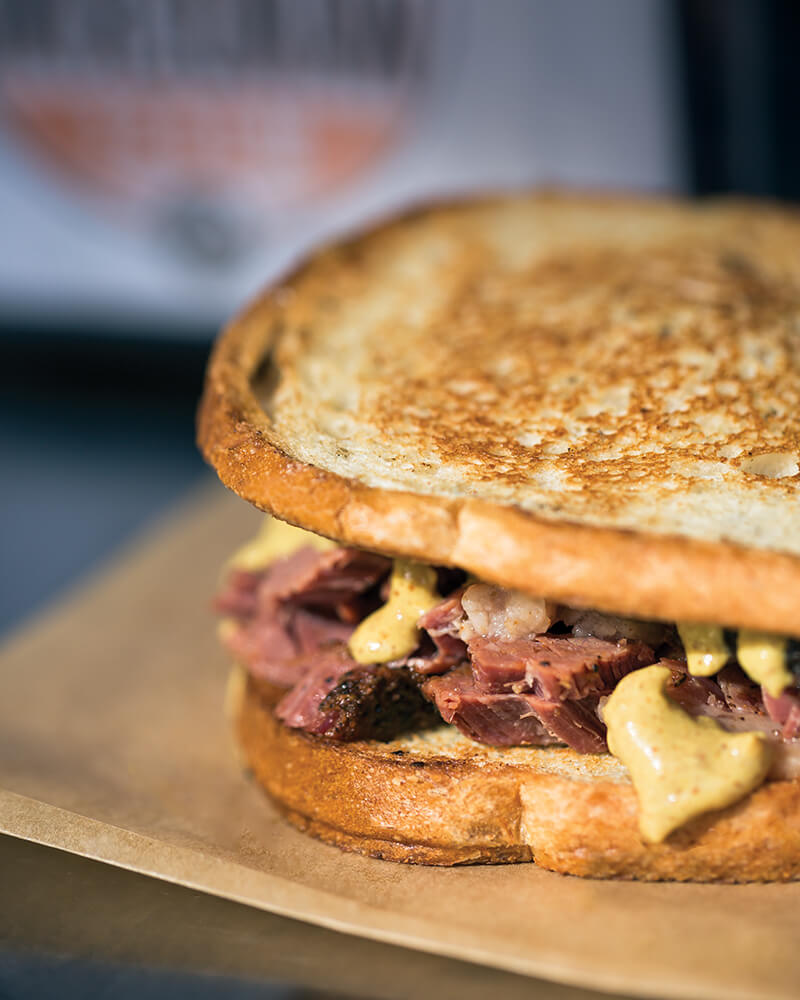 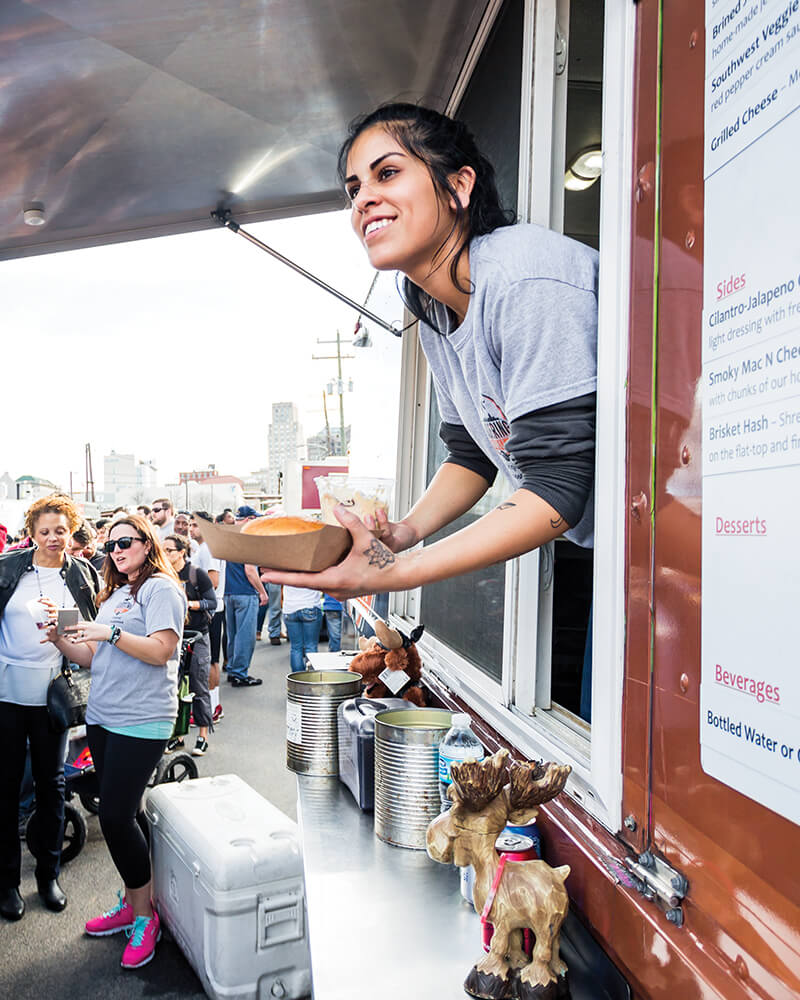 “I’ve been on mission trips, and this is the best jerk chicken I’ve had outside Jamaica,” a customer claims. What tends to run out first, though, is the “Montreal-style” smoked meat sandwich, with brisket that’s been cured for days, then boiled with coriander to produce a red, pastrami-like meat. No wonder another customer says, “I drove 30 minutes for this.” At right, Arrika Martinez serves it up. 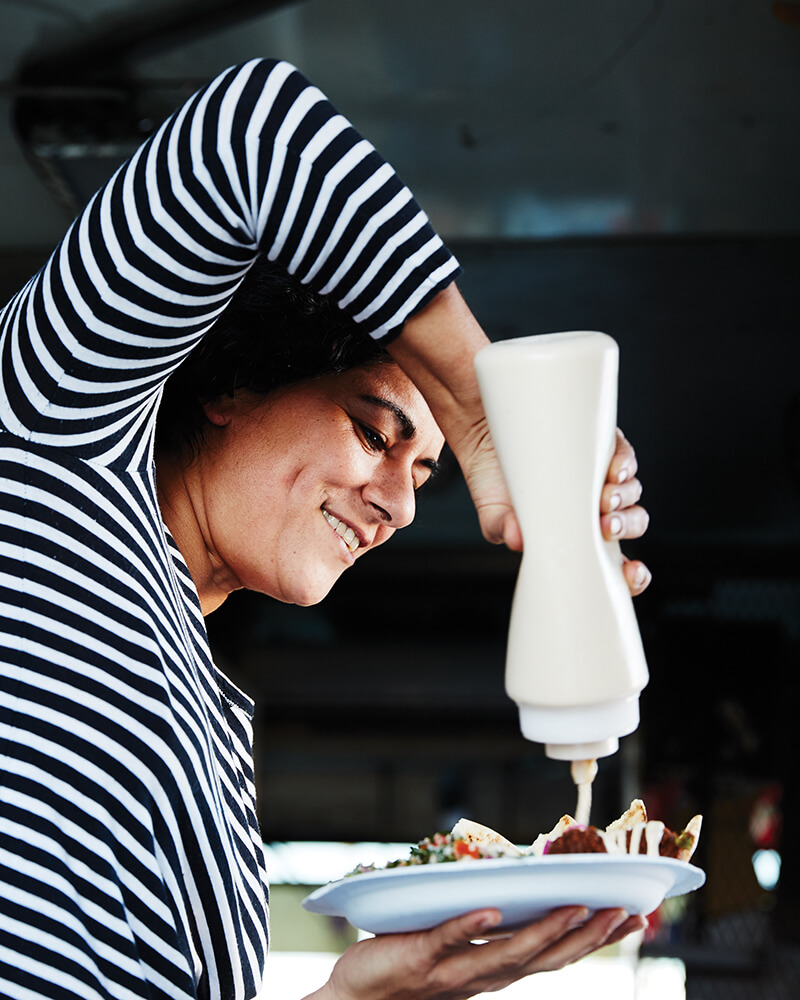 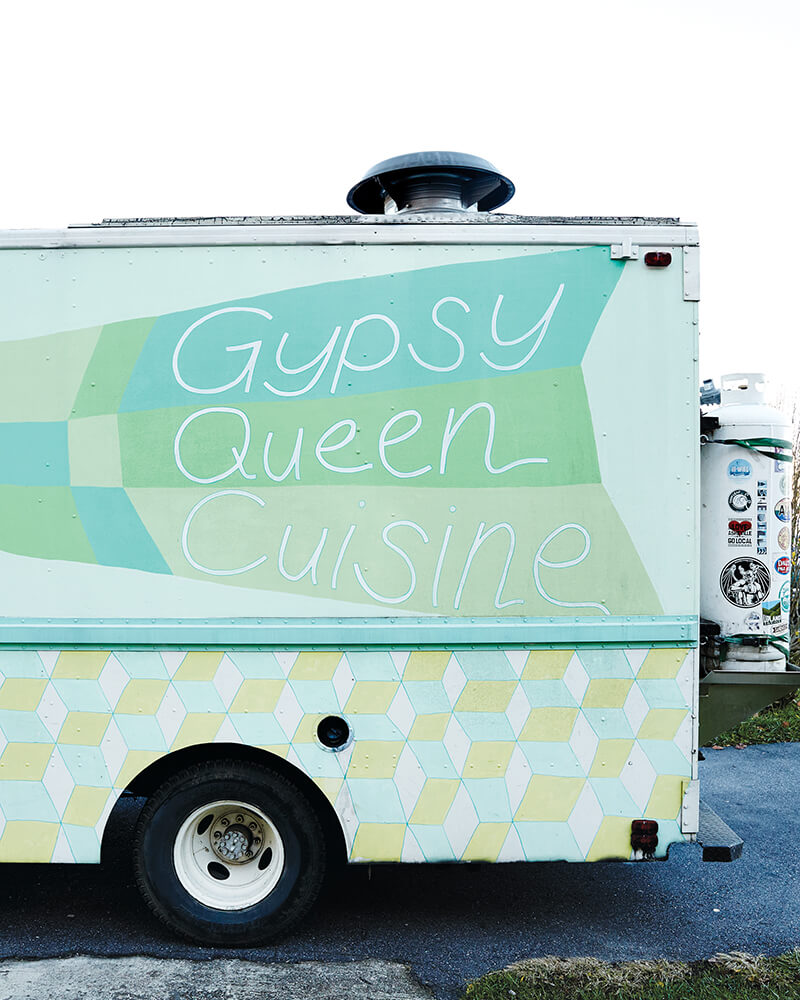 Suzy Salwa Phillips left Lebanon at age 15, and now, in freewheeling Asheville, her food truck (and brick-and-mortar deli) serves up authentic Lebanese food, from kale-and-lentil soup to chicken shawarma. If you think you don’t like cauliflower, you haven’t had it Lebanese-style — fried, and served with “mighty toum” (left), an aioli-like sauce of garlic, lemon, oil, and salt, that’s the ranch dressing/cream cheese frosting of Gypsy Queen Cuisine: It makes whatever it coats taste heavenly. 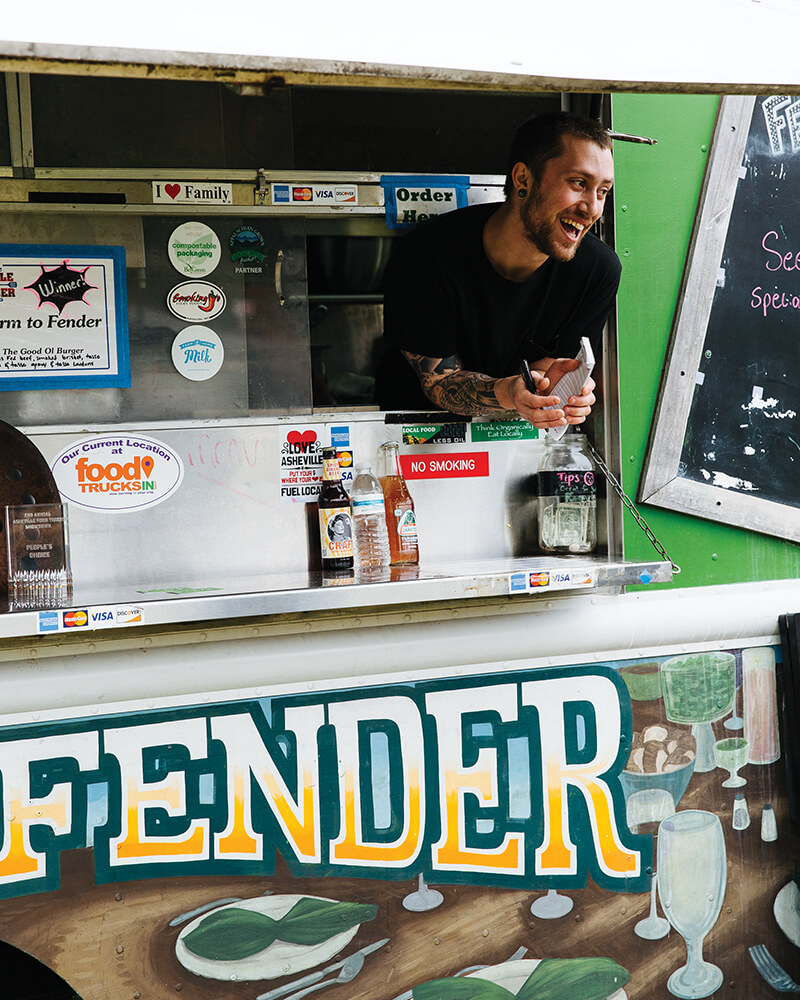 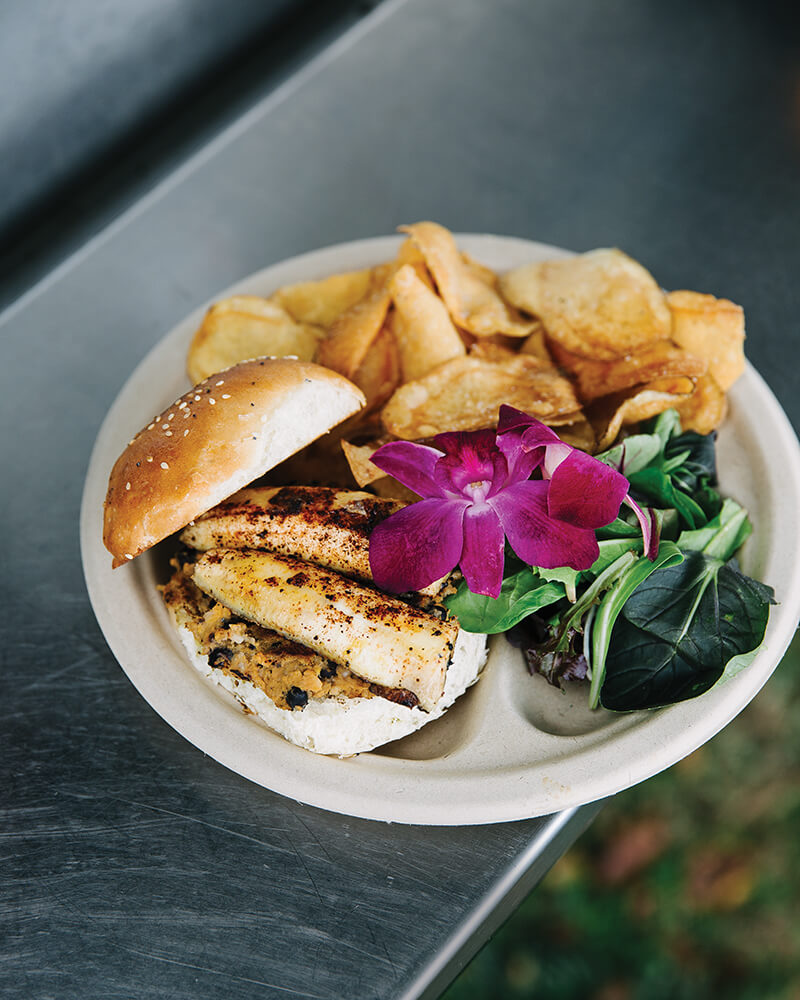 Jeremiah Jackson’s theory is that the world’s problems stem from “people eating animals full of stress and anger.” So his food truck features only meats from humanely raised animals. Jackson makes everything, from the seeded rolls to the delectable collards. Left, Jordan Kniffin awaits your order. Try F2F’s sweet potato-black bean burger with chipotle grilled bananas on homemade bread, plus a side of hand-cut chips. 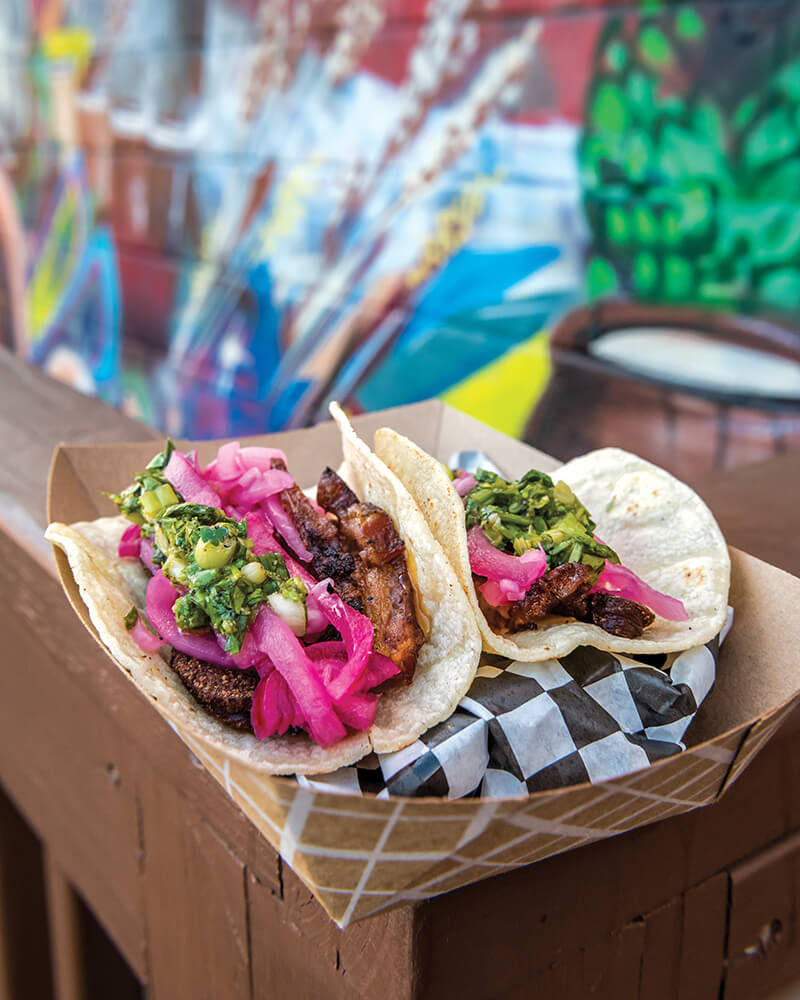 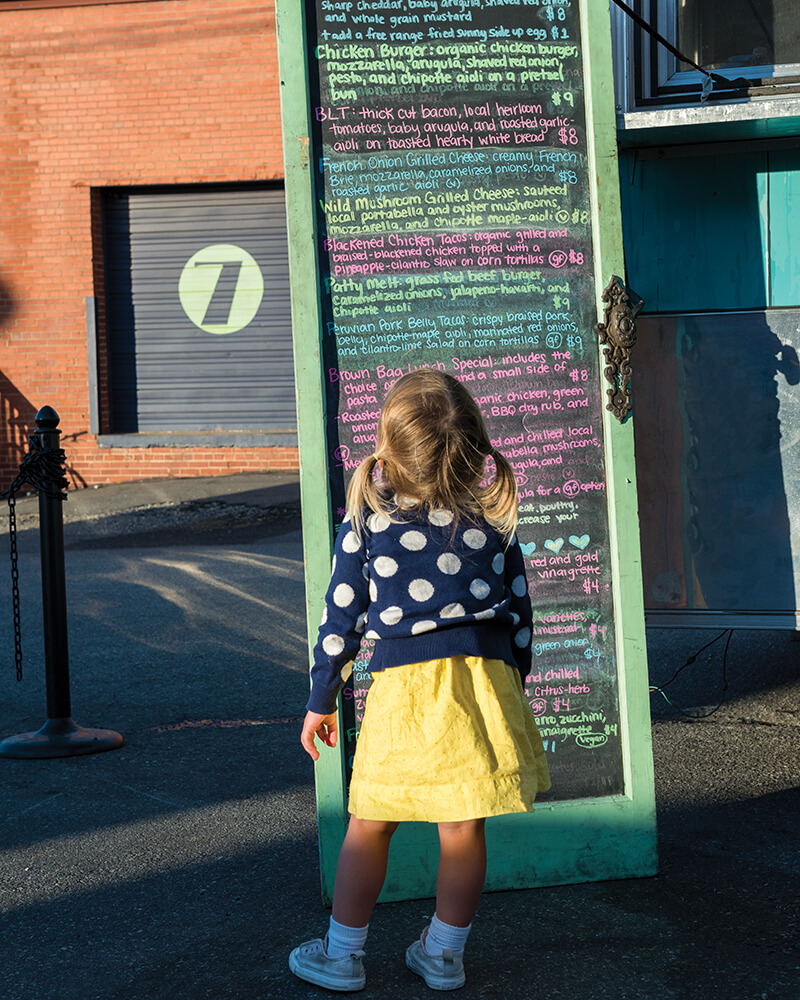 Chef Tara Diamante writes the menu board for her food truck in fluorescent colors — take a look; the vibrant pinks and greens match the food. Diamante and her chef/fiancé, Brenton Ebersold, met at Johnson & Wales University. Both are dedicated to local sourcing, and another menu board explains where every ingredient originates. Here, Peruvian pork belly tacos are served in the ubiquitous paper boat. 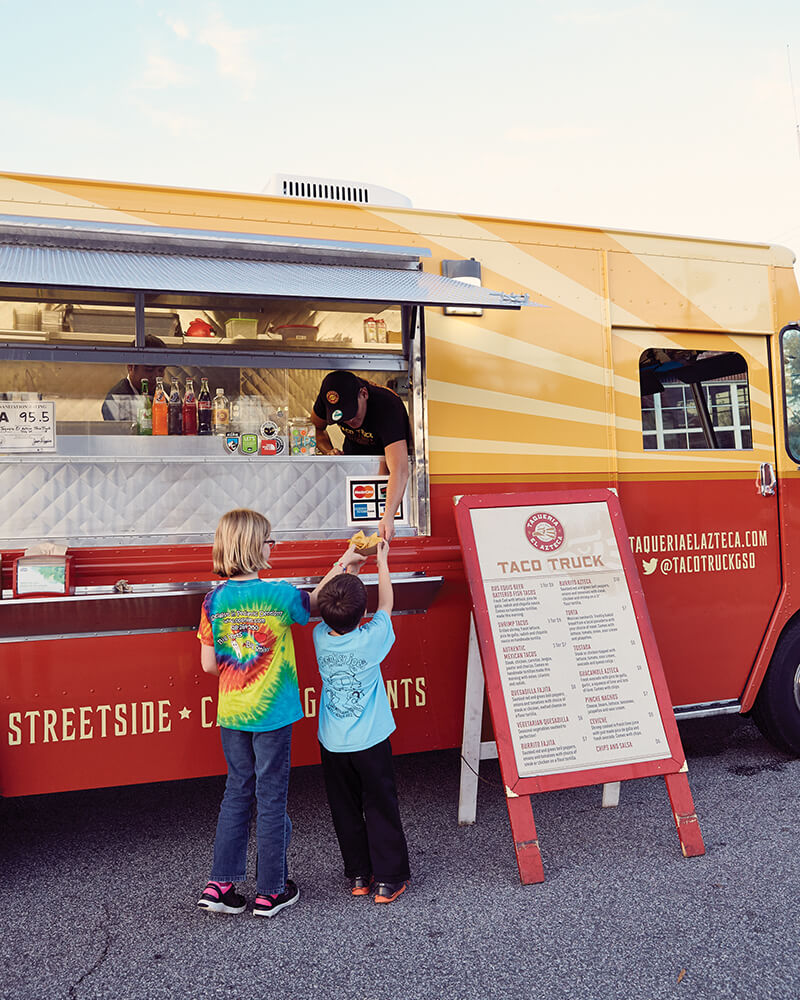 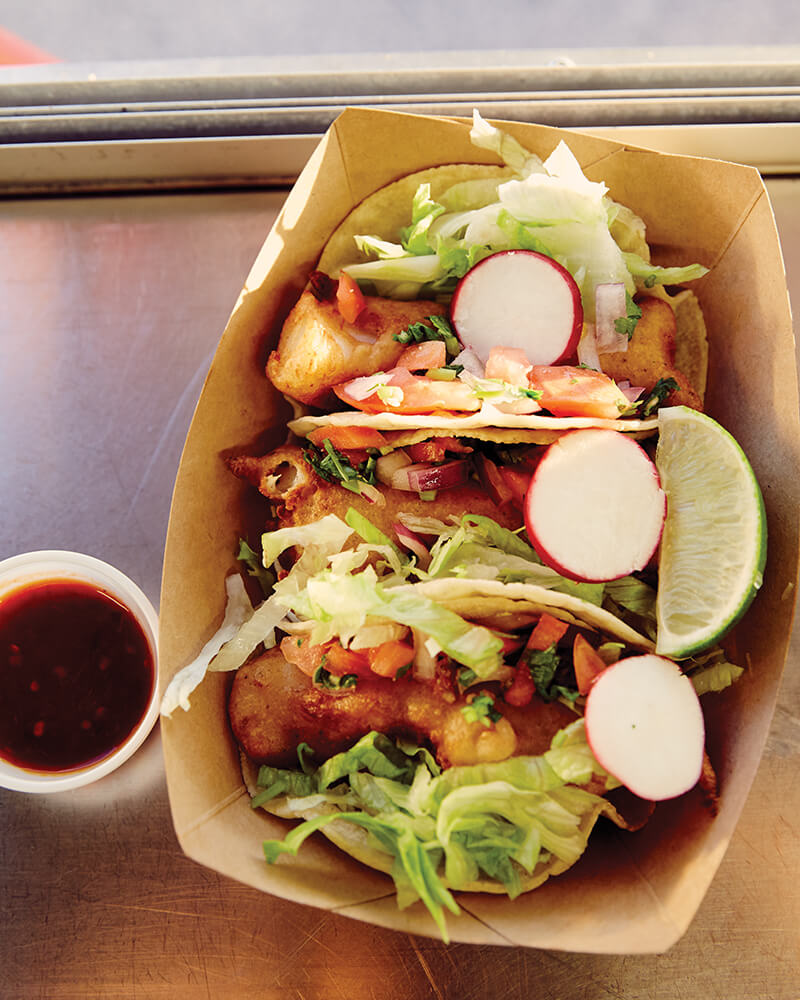 The power of a food truck, owner Greg Munning says, is “bringing people together who wouldn’t otherwise hang out — broke college students and men in suits.” Every employee is bilingual; one woman (Gloria) makes every tortilla “like your grandmother,” with only corn, water, and salt. Everything is served in post-recycled consumer products. “It’s like a military operation,” Munning says of the daily schedule, from cleaning to stocking to serving. “A food truck has an obligation to the community, and to the environment,” Munning says. (Get the fish tacos.) 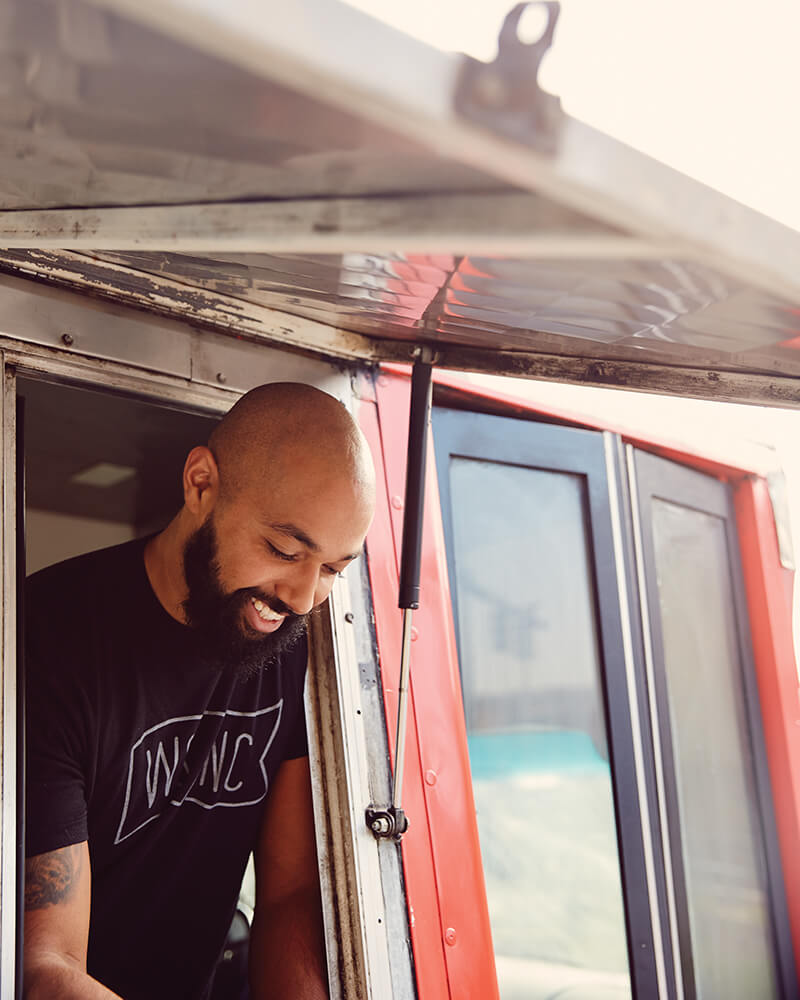 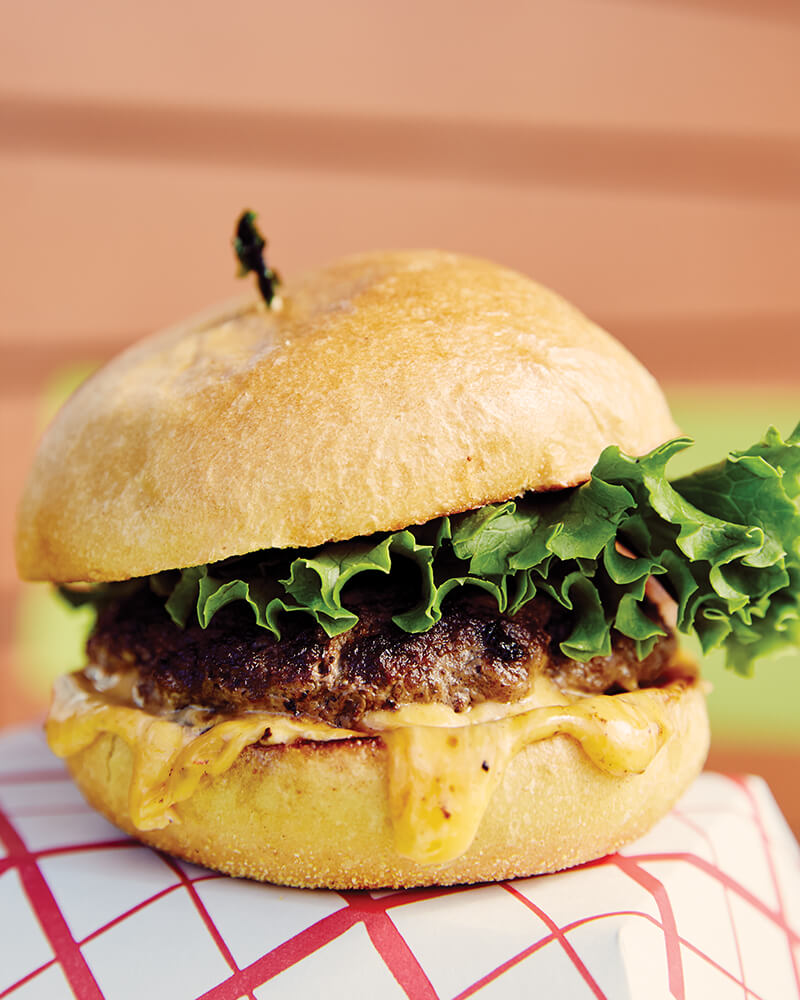 The PBB&J Burger — PBB for peanut butter and bacon and J for hot pepper jelly — is the signature burger for owners Ben Devar (left) and Gavin O’Neill, but Ben’s Pimento Burger is the best seller in Winston-Salem. Ben, who has a BS in biz from the University of North Carolina at Chapel Hill, experienced the food truck scene in Portland, Oregon, came home, and started the truck. Gavin, with experience in restaurants, joined him. “Basically,” Ben says, “we went with our favorite foods.” After having served from more than 200 locations, “people wave us down wherever we go.” 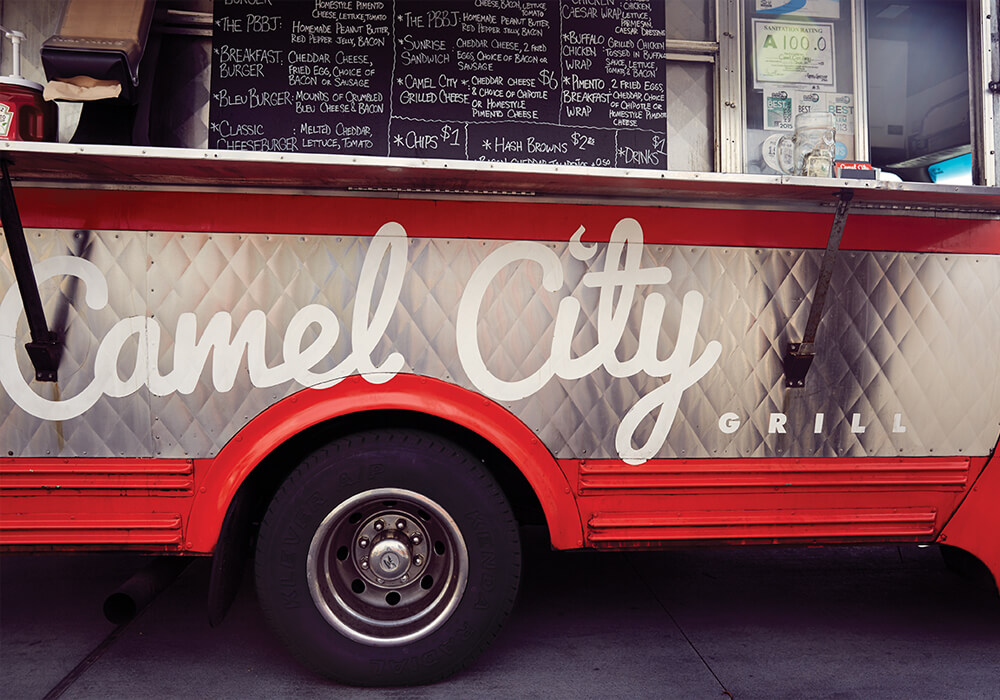 Look for the decals, tattoos, and bandannas. Look for the ever-present logos for Twitter and Instagram and Facebook, because these peripatetic folks live and die, cook, feed, and travel via social media. To help readers locate these meals on wheels, from burgers to bulgogi to barbecue, we’ve created a search tool. Visit ourstate.com/foodtrucks to find the cuisine you’re dreaming of.