I’m not sure why this time of year makes me think of passenger pigeons. Perhaps it’s the solitary wandering through winter woods that seem nearly devoid of birds, save for a few nuthatches and hardy titmice. I course along creek bottoms in Umstead State Park, and on an hour-long hike, I can count the number of birds on one hand. Or maybe it’s the contrast between those meager sightings and what I know will be a trickle, and then a flood, of migrating birds just a month or two away.

Legend and lore abound about the wandering billions of Ectopistes migratorius, tales of plenty and plunder that fill the three and a half centuries from the first European mention of the bird by Cartier in 1534 to the final breath drawn by the last of the species, the famous Martha of the Cincinnati Zoo, on September 1, 1914.

Most observers of these flocks were so struck with wonder that they could hardly attempt to number the birds. The ornithologist Alexander Wilson was among the first to shake loose from dumbfounded awe and start counting. In the early 1800s, he was ranging through the woods near Frankfort, Kentucky, when a flock of pigeons appeared overhead. The flock continued unabated for four full hours, a continuous stream of birds followed by detached regiments bringing up the rear for another hour longer.

Wilson began to calculate. If the flock was a mile wide (and he believed it was wider) and moved at 60 miles an hour (probably a bit too fast), then the four-hour flight would have made the flock 240 miles long. Multiplying how many birds he figured occupied a square yard in the flock, Wilson arrived at an estimate of more than two billion birds. “An almost inconceivable multitude,” he admitted, “and yet probably far below the actual amount.”

When the pigeons arrived in the Piedmont, they did so in all their feathered glory.

Such large flocks occasionally filtered east of the Appalachians and into the oak woods of the North Carolina Piedmont, and when they arrived, they did so in all their feathered glory. One winter roosting left such an impression on the Moravians that a retrospective of the community’s early history recounted the event, though it had happened nearly 35 years earlier:

In 1760 an extraordinary Occurrence happened about the Centre of the Wachovia Tract, on a Creek to this day called the Pidgeon Branch, which has the Appearance of an Improbability, yet actually happened, to the great Amazement of the Beholders, viz. an incredible Number of wild Pidgeons assembled there every Night for a Month together, in a small District, perching manyfold upon one another, so as by their Weight to break down the largest Limbs of Oaks, bending the Tops of others to the Ground … The Noise was so terrible that a Man speaking to his next Neighbor could not be heard without bawling loud, and Waggonloads of Pidgeons killed with Sticks were carried off.

The next year, the pigeons were so numerous, and resided for so long, that the locals seemed relieved when finally two feet of snow “at last drove the wild pigeons away, after two months.” Other notable roostings occurred in the winters of 1799; in 1806, when “near Salem alone many thousand were killed with sticks at night”; and in 1814, when the birds were first referred to in the Moravian records as “passenger” pigeons.

Not long after, the great pigeon roosts vanished from North Carolina. There is a report of a roosting four miles square in Surry County in the winter of 1842; the birds stayed 17 nights, wrote William Holland to his son Francis, then a Moravian missionary in Jamaica. Then, the pigeons “left and flew over the mountains.” In the landmark Birds of North Carolina, published in 1942, the authors recorded the final sightings of a passenger pigeon flock in North Carolina. They were told of a flock “about a mile wide” thronging across Alamance County in 1871 or 1872. There are three records of pigeons in the state in 1880. On April 18, 1891, H.H. Brimley, the first curator, and later director, of what is now the NC Museum of Natural Sciences, followed a single bird for hours through pinewoods near Raleigh. Three years later, a female was collected up in the mountains, near Weaverville. That was it. No more — at least, not in North Carolina. 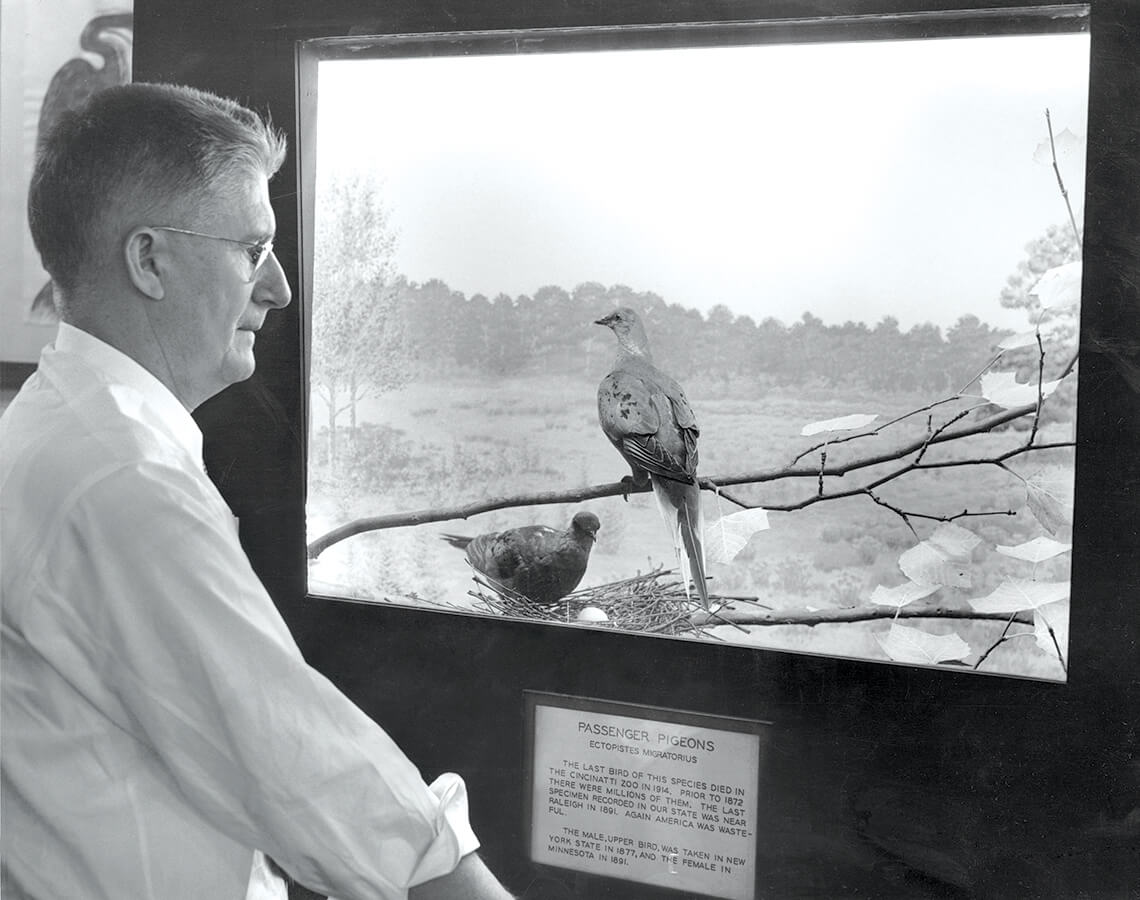 Harry T. Davis, the second director of the NC Museum of Natural Sciences, led the movement to designate Raleigh as a Municipal Bird Sanctuary in 1946. photograph by State Archives of North Carolina

If you wish, you can see the very last of the passenger pigeons, the famous Martha of the Cincinnati Zoo. It’s unclear where and when she was born — in 1885 at the zoo, perhaps — but on September 1, 1914, she perished, and toppled off her perch. Her body was encased in 300 pounds of ice and shipped to the Smithsonian Institution in Washington, D.C., where she remains, mounted and on exhibit at the National Museum of Natural History.

In the beech groves of Umstead, the winter woods seem to be waiting: Soon enough, these trees will nearly quiver with tanagers and warblers and sparrows and thrushes. But the pigeons will never return. Within the lifetime of a single human, the passenger pigeon vanished. Gone are the feathered rivers in the sky, the thunderous roosts with their crackling timber. In their place is a deep-felt void, and a sadness that stalks me on these late-winter hikes. I’ll never see a passenger pigeon. And I hope to never know that day when the world must bid another bird adieu.

The Ornithology Collection at the NC Museum of Natural Sciences, started by longtime museum director H.H. Brimley and his brother C.S. Brimley, is now one of the largest of its kind in the Southeast. Among its 20,000 avian specimens, two rare birds — a passenger pigeon and a Carolina parakeet — find life after extinction.