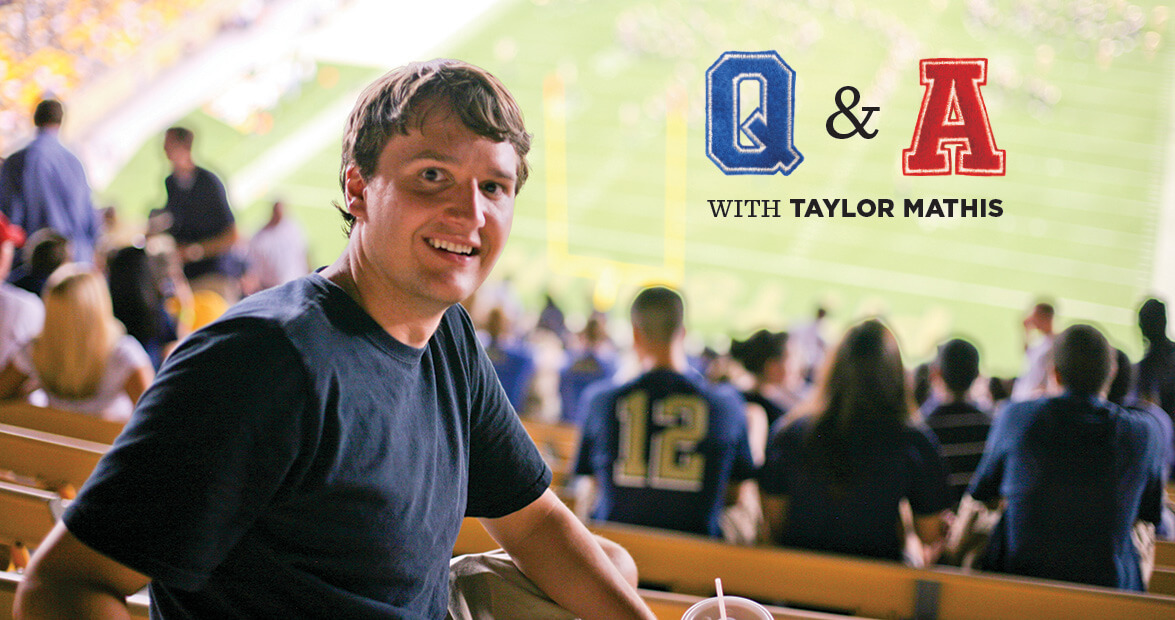 Q. Did you grow up tailgating?

A. I went to a few UNC and Duke football games, but the tailgating that we did was nothing like what I saw while researching for the book. I grew up in Charlotte, and for college, I got a swimming scholarship to go to the University of Wisconsin. It was more when I was in college that I discovered tailgating and cooking and celebrating with my friends before the game.

Q. What differences did you notice between tailgating in the South and in the Midwest?

A. You can see differences in the food. The South has a lot more pork and sweet tea, and the Midwest — particularly Wisconsin — has more beer, cheese, and bratwurst. There’s also more beef in the Midwest and different types of seafood than in the South. With most of the South in the Eastern time zone, early games start at noon instead of 11 a.m., as in Wisconsin’s Central time zone. This extra hour of tailgating is great to have in the South.

A. Overall, the amount of work, preparation, and enthusiasm people put into it. It’s definitely a lifestyle and a culture here. In general, you’ll see a lot of pork, a lot of sweet potatoes, a lot of dishes with ingredients grown in North Carolina. Many tailgaters try to eat locally, and a lot of them are fishermen or hunters. When I was in Raleigh, I saw a guy from Emerald Isle who’d brought crabs he’d caught that morning. At ECU, they had oysters.

Q. Was there much difference between the mountains and the coast?

A. One of the biggest differences was in barbecue from west to east, pork shoulder or whole hog, and in the barbecue sauce.

Q. What have you learned about North Carolina football culture in general?

A. Here, with professional sports teams versus college teams, everyone likes the Panthers. But if you ask people what college team they like, you’ll get 20 different answers depending on where in the state you are. Your allegiance will be very different on Saturday than it will be on Sunday.

A. Three things: You have to be able to eat standing up — it’s awkward to cut food standing up. It has to be accessible — either quickly made-to-order or fine sitting out, because you’re generally there for four or five hours. The last thing is that it has to be fun.

Q. How do you make food fun?

A. You can add the fun by team-theming it. I was always impressed with how fans would creatively theme their menus toward their opponents. For big rivalry games, fans would usually have a themed menu and try to “eat” their competition. The cookbook has sidebars on how to do that, how to add your team color, how to cater your food to the weather.

A. If you’ve never tailgated before, don’t try to do too much, because you still want to go and enjoy the game. Feel free to divide up the duties. You don’t have to make everything from scratch — make a dessert or a side, but bring chicken from the store. Don’t overwhelm yourself; just take on what you think you can do.

Q. What are your essential tailgating items?

A. For games early in the season: sunscreen. Another one is trash bags — it’s always good to leave a tailgating site as clean or cleaner than you found it. Also, it’s a good idea to separate your meat from other things in your cooler, and if you can, have a separate, smaller cooler. It prevents cross-contamination and keeps the meat colder.