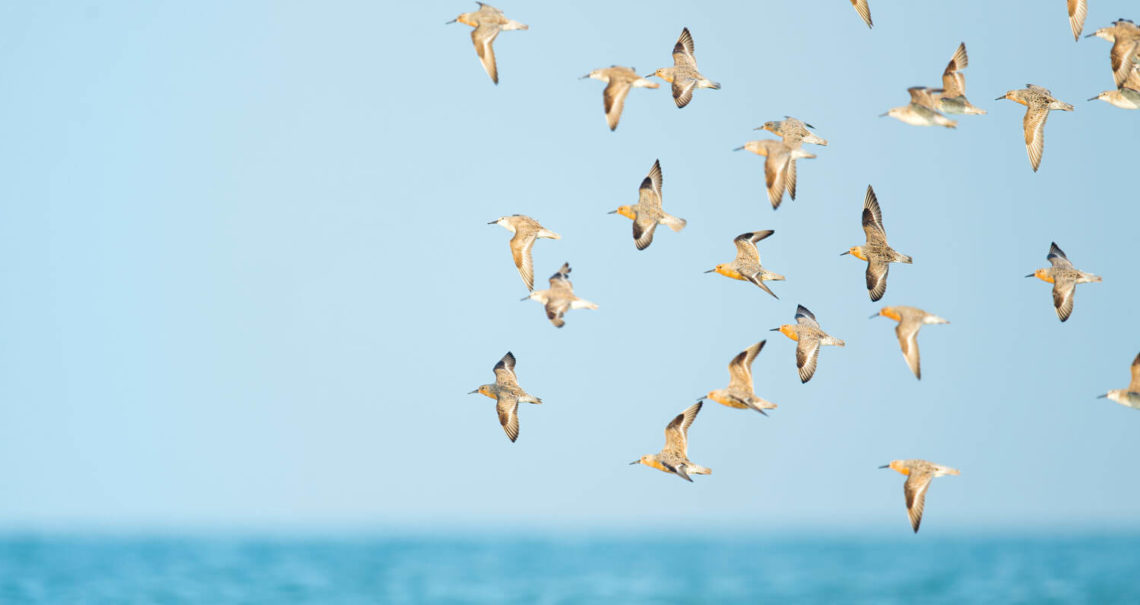 On the beach, the sanderlings mass along the water’s edge. It’s the first time I’ve noticed their growing numbers, a late-summer swelling from a few scattered birds picking at coquinas and sand crabs to small blankets of birds huddled together and moving nearly as one, ebbing and flowing with each wave that washes the beach. More shorebirds strafe the breakers a few dozen yards away, scattered flocks of dunlins and red knots flying impossibly low to the water to glean the unseen lift from the air compressed between wing and sea.

I watch them and smile. This is one of my favorite times of year. There’s a fullness in the atmosphere, a pregnant suggestion that something is happening. Something is shifting. The world itself seems on the verge.

This is the season of movement and change and transformation, for the shorebirds on the beach herald the coming feathered waves: the hawks in their smudgy gyres overhead, the black ducks and blue-winged teal and redheads soon to wing through the marshes. It’s a time of urgency and commotion. It’s the season of Zugunruhe.

What a delicious word this is: ZUK-gun-roo-huh. It might not roll gently from the tongue, but its meaning is just as beguiling as the funky pronunciation. It comes from a mashup of two German words: Zug, referring to “a migration” or “a movement,” and Unruhe, meaning “restlessness.” Together, they refer to the “migratory restlessness” experienced by birds on the cusp of the turning seasons. Zugunruhe is an innate, ineluctable biological stirring that it is time to move, time to change, time to fly. Prompted by shortening days and changes in air pressure and the availability of food, birds feel the pull of distant places. 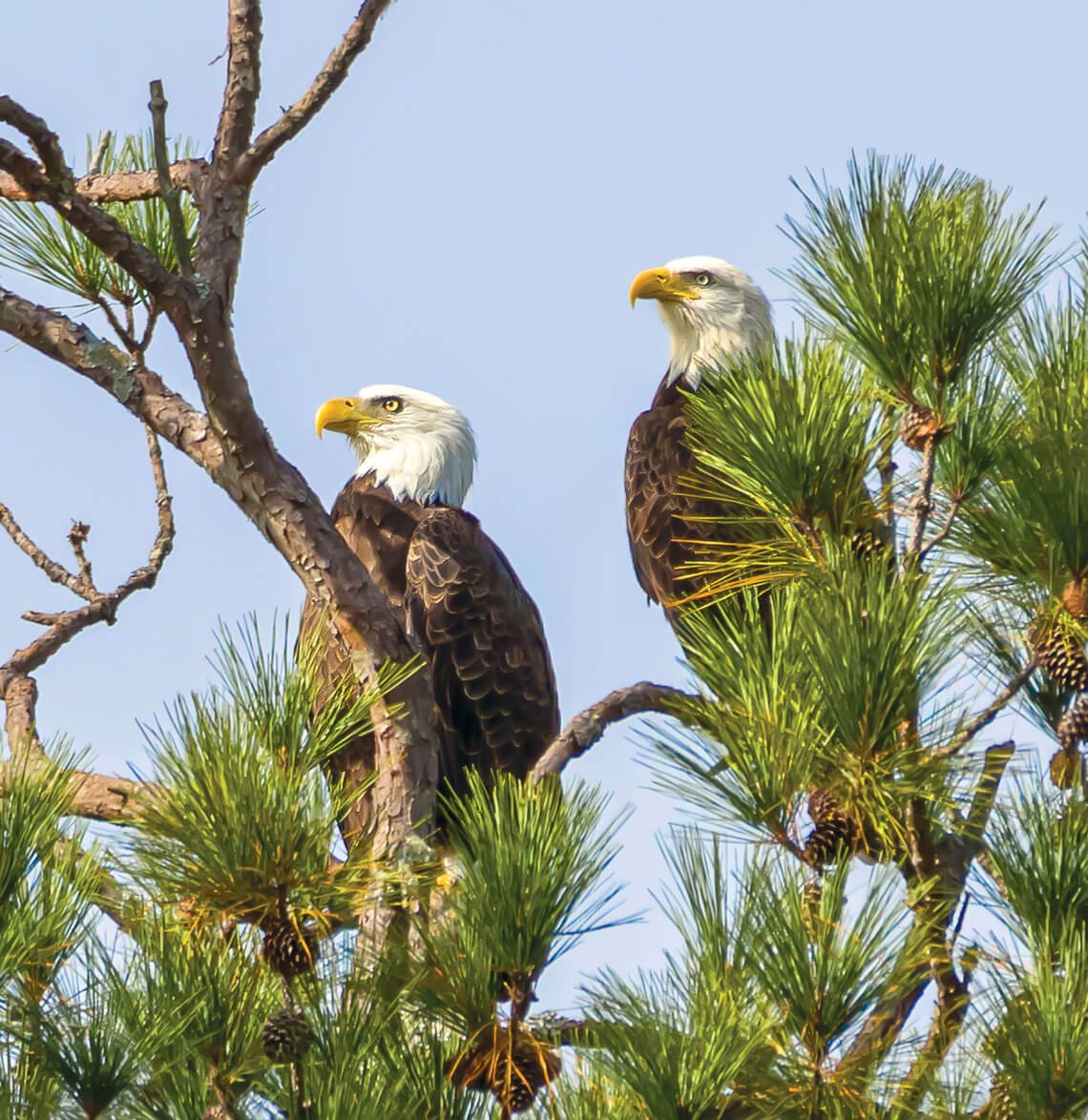 Studies have shown how ingrained and hardwired these urgings are in migratory birds. Held in paper-lined cages floored with ink pads, wild birds will orient themselves naturally toward their migratory routes. Their tiny tracks coalesce in a pattern that follows their wild counterparts. Cage a wild, migratory bird during the shortening days of autumn, and it will launch itself against its wire prison, frantic for places south. They cannot help themselves. It is time to fly.

On the beach, the phenomenon makes itself known with impressive pageantry. So, too, in the mountains, where August’s drip-drip-drip of migrating hawks, eagles, vultures, and other birds of prey turns into a veritable river of raptors by late September. But elsewhere — in inland forests and bottomland swamps, along urban greenways and in practically every backyard in North Carolina — fall migrations are decidedly more nuanced than the colorful processions of April and May. Whereas birds in the spring dress to impress, with bright, mate-attracting garb, most birds in the fall pull on their frumpy overcoats. It takes a lot of energy to produce a riotous red topknot or a flashy wing patch. If love isn’t on the menu, it’s really not worth the work, and in the fall, jewels like buntings and tanagers wear the avian equivalent of sweatpants and baggy pajamas. Goldfinches turn drab as old oak leaves. Even loons lose their onyx luster.

Shorn of their fancy garb, these birds nonetheless sweep across North Carolina in massive flights. Most pass in the cool of night, when the air is less turbulent and more conducive to clicking off the miles. They come and they go with little fanfare and hardly any singing. Southward ever. Pulled by restlessness.

This year, more so than ever, we humans might recognize deeply the birds’ yearning.

Most of us, I think, have felt a bit of Zugunruhe at one time or another. Perhaps in humans, it’s akin to the shivers that go up your spine when a rabbit runs over your grave, as the old Southern saw goes. And this year, more so than ever, we humans might recognize deeply the birds’ yearning, this restiveness, this desire to launch into some new adventure or journey. We’ve all spent too much time of late cooped up and disconnected. We all feel the caged bird’s unease.

One of my most favorite memories as a young father is of watching a tiny portion of this global pageant. At dusk, my children and I would stretch out in the middle of the sidewalk in front of the house, Markie’s brown curls on one shoulder, Jack’s blond bangs on the other. We’d count bats and find dinosaur shapes in the clouds. The heat that collected all day in the sidewalk would warm our backs as the evening air cooled all around.

I didn’t realize it at the time — I’d not yet heard of the concept — but we were celebrating Zugunruhe. The zigzagging bats and cumulus-cloud triceratops kept Markie and Jack engaged, but I lay there hoping for a different visitation. Typically, I’d hear them first: a raspy peenting call, high over the oaks. Then, black scimitar shapes against clouds tinged with sunset pinks. High over Raleigh, the nighthawks would soar in great swooping flights, stalking insects on the wing. Theirs is one of the longest migratory flights of any North American bird species, as many as 4,000 one-way miles toward the southernmost corners of South America. That they visited the sky above my little inner-city sidewalk seemed a miracle.

Flying erratically, like moths, nighthawks would wheel overhead, and I’d point out their flashing white wing bars. It was a marvel to watch them hunting. To feed, nighthawks literally trawl the crepuscular sky. They zip through the air with mouths wide open, swallowing thousands of flying ants and other insects straight down the gullet as they pack on fat for the journey to come.

There was no way to know what the nighthawks might have comprehended about their journey over the weeks and months to follow. And no way to parse what they might have thought of the tiny figures lying supine below. But at least until the sun fully set on those late summer nights, and I carried sleepy-headed children back into the house, we shared a sense of Zugunruhe. The primordial prompting that no wild bird can ignore is the yearning we share during our own various seasons of life: to spread our wings and strike out for far horizons.