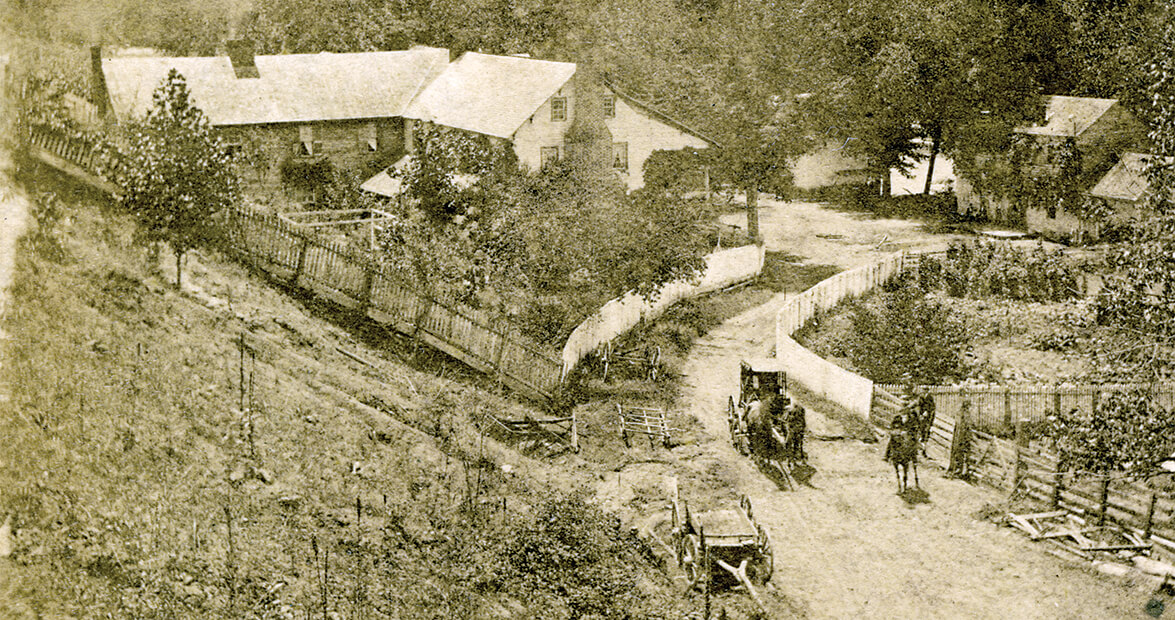 Dawn was but an hour old when I pulled my truck off to the side of a gravel road near the northern Rowan County line. I crossed a three-strand fence of barbed wire and pushed through briars and poison ivy grown thick and tangled in the open gash of a powerline access road. The day before, a worker with Duke Energy had pointed out a gully in the mature forest that cloaks the bluffs near Duke’s Buck Steam Station, hard by the Yadkin River. Six feet deep and 12 to 15 feet wide, the depression ran downslope to the backwaters of High Rock Lake. I held on to a tulip tree sapling and eased into the ravine carpeted with shin-high mayapples and false Solomon’s seal.

That ravine is the remnant of an old wagon road. It’s likely the footprint — or one of the footprints — of the Trading Path, worn first by the feet of Native Americans, then by traders’ horses, and then gouged deep by the wagon wheels of settlers throughout the 18th century. I followed the gully straight to the river, where I climbed a jumble of boulders shaded by a sycamore tree. It could be the very spot where John Lawson stood in the winter of 1701, at the end of a most remarkable week.

One of the earliest explorers of the North Carolina interior, Lawson had been picking his way along one of the best known of the largely forgotten historic roads of colonial North Carolina. Along the Trading Path, he’d seen passenger pigeons and heard wolves howling in the night. At a Saponi village, he’d met Indians so tall and strong he figured their diet was heavy with bison and elk, which still ranged the woodlands. Now Lawson took rest at the Trading Ford of the Yadkin, catching his breath as swans and unfamiliar ducks trellised the water, songbirds singing their “melodious tunes” in the woods overhead, as he wrote.

It’s odd to think that many of our first roads were built for hooves, not axles.

With binoculars I watched seven soot-black cormorants cling to a snag in the river channel, like old men huddled on a park bench, and I wondered if the tree was caught in a submerged pile of rocks, pocked and gashed by horseshoe and wagon wheel. Among the first whites to cross Trading Ford were fur traders and their packhorses laden with 200-pound bundles of deerskins reeking of rancid fat and woodsmoke, as well as pots and brass kettles clattering, and trading beads and baubles riding dry in leather satchels and saddlebags. Soon to follow were the horses of settlers and the wagons of their families, teetering across the rocky river bottom until a flatboat ferry opened for business. These first settlers left their families and friends in Pennsylvania and the Shenandoah Valley, turning their backs on land prices too steep for immigrants, or for the sons of immigrants. From here they streamed into the crossroads hamlet of Salisbury. From there — who knows? To tiny Fort Dobbs north of Statesville, or to the Appalachian foothills and beyond. And on and on, and followed by ever more hooves and wagons and weary feet dusted with the red chalk of Piedmont soil.

In our helter-skelter dash toward tomorrow, we have all but forgotten the old roads that led us to today. We turn the car ignition and sail down countless ribbons of highway, largely heedless that beneath the blacktop might lie a plank road that once carried farm carts, or a muddy road that carried Union troops. Our cross-country shortcut to the coast might once have been a two-track used by covered wagons. The road to the lake could have served as a single-track trail worn by cattle driven to market, or settlers driven to new ground, or Indians on the path to trade or war. We rarely think about the history that might lie under the asphalt. Set the cruise control. We’ve got places to be. Over the centuries, that much hasn’t changed. 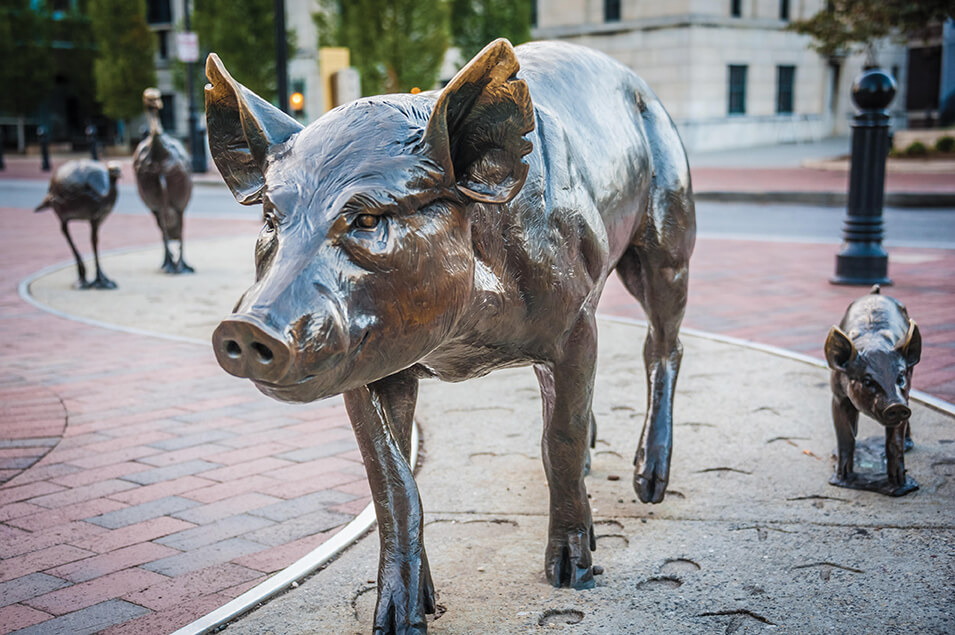 A station along Asheville’s Urban Trail recognizes the countless drovers who passed through town with livestock. photograph by © Allen Creative/Steve Allen/Alamy Stock Photo

Once you spend a bit of time poking around the family trees of North Carolina’s roads, however, you’ll never look out the windshield in quite the same way. Rolling south on NC 8 just south of Winston-Salem, I can imagine wagon carts of goods from northern Piedmont settlements groaning through the mud toward the Trading Ford. A handful of early routes turned into dozens of interior roads. Carolina Road was the name given to the various parallel paths that ran from south of Roanoke to the colonies of North and South Carolina. The Catawba and Northern Trail ran about 100 miles, connecting the lower Cherokee towns of South Carolina to North Carolina’s Yadkin River settlements. Untold thousands of settlers bound for Tennessee used the Catawba and Northern Trail, now vanished to history. The Great Wagon Road ran from Philadelphia down the Shenandoah Valley, then turned south toward the Moravian settlements north of present-day Winston-Salem.

I love the history of the old Drovers’ Road that once led north and south from Asheville. To get livestock from western North Carolina to the sought-after markets of Asheville in the early decades of the 19th century, farmers drove a virtual ark of domestic animals along trails that developed beside the French Broad River. Imagine the scene: thousands of hogs and cows, hundreds of turkeys and chickens, driven for miles by young boys along the rutted, muddy path to market. The menageries crowded the wooden ferryboats that crossed the river. A man with a horse was charged 6 cents per crossing. Loose stock brought 2 pennies per head.

Thousands of miles of historic Carolina road have gone to seed — abandoned and forgotten.

It’s odd to think that many of our first roads were built for hooves, not axles. Parts of the Drovers’ Road were incorporated into the Buncombe Turnpike, completed in 1827. Not long after, upward of about 150,000 hogs were driven through Asheville each fall. These days, a railroad line lies atop much of the old Drovers’ Road alongside the French Broad, but south of Asheville, you can still drive U.S. Highway 25 Business through Flat Rock and Hendersonville, lean into the curves, and be thankful you don’t have to dodge pigs in the roadway.

That pattern — first a wildlife trail, which turned into an Indian trail, then a settler’s trail, and on to trading path, plank road, county road, state road, highway — doesn’t hold for all the old roads. Thousands of miles of historic Carolina road have gone to seed — a reverse evolution, so to speak — abandoned and forgotten.

Like that trail to John Lawson’s Yadkin River overlook. If you didn’t know that you were looking at a 300-year-old artifact, you’d never recognize the wooded gully as a place of such significance. Sitting on the bare bones of the old Trading Ford, I heard wood thrushes whistling lilting refrains along the greening bluff above, where the old roadbed was sheathed in mayapple, toadshade trillium, and cut-leaved grape fern. From higher still, in the canopy of oak and beech and tulip trees, came the commingled buzz and bubble of treetop warblers. All around I could hear birdsong and moving water.

And the distant moan of traffic on Interstate 85. It turns out that the location of the Trading Ford and the Trading Path here were just single points on a continuum of transportation that continues today. The ford begat a long series of roads that converged like the neck of an hourglass here. Interstate 85 lies atop the old U.S. 52, which parallels the current U.S. 29. Between the two runs the Norfolk Southern Railway. Heck, even the North Carolina Transportation Museum is just a couple miles away.

I sat there with the birds and tried to hear what the rocks and the river had heard over the centuries — the lilt of some lost Native American tongue, the clatter of livestock, the thunk of an iron wheel on wood, and later, the rattle of Model A’s, the groan of 18-wheelers, the jabber of kids stuck in the back seat on the way to the beach, the incessant thumping heartbeat of history and commerce, culture, and community that has wound over and alongside the old Trading Path as long as humans have been on the move.

On the move, on the road, on their way with dreams of a safer home, a better life, an escape from injustice. Or just the shot at a sunny weekend at the coast. Every road is paved with some sort of dream.