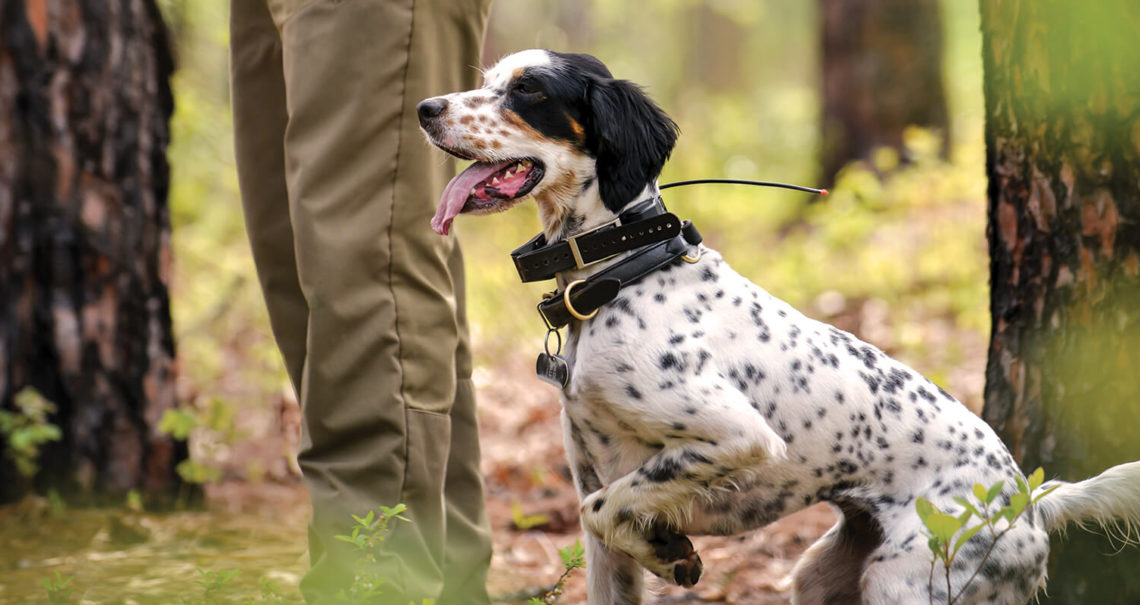 The bird dog swaps ends in midair. Literally. One moment, he is vaulting through the meadowed forest, a schooner in a sea of broomsedge and turkey oaks, seining the air for the scent of a quail, then suddenly he finds it mid-stride. Instantly, the pointer contorts while aloft, pulling off an aerial 180, and lands on four paws, solid as a statue, nose angling toward the ground. Somewhere, just beyond his quivering muzzle, is a covey of quail.

I’ve seen a lot of bird dogs point an awful lot of quail, but that was a move more akin to a freestyle snowboard competition than a North Carolina pinewoods quail hunt. I’m not sure I’ve ever seen a bird dog pull off such gymnastics, and it underscores what so many people love about pointing dogs: They want that bird so badly, they’ll never give up. 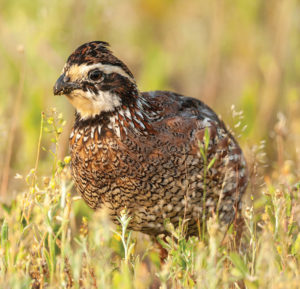 Of all the lost chapters of North Carolina history, I find this one of the most intriguing: For a few decades around the turn of the 20th century, North Carolina was known as one of the nation’s glamour spots for well-heeled Northern hunters. In the 1890s, the Southern Railway Company extended lines to High Point and Greensboro, and suddenly, access to North Carolina’s Piedmont was but a 17-hour train ride from New York, short enough passage for a long-weekend lark. Flush with the spoils of the Gilded Age, wealthy hunters flooded in. Little hamlets like Climax, Thomasville, and Jamestown were turned into private and public resorts with opulent hunting lodges.

One of the first was the Thomasville Shooting Club, established in 1894 with a 20-room clubhouse-mansion across from the downtown Thomasville train station and hunting rights leased to 60,000 acres of gunning lands. Hunters coursed the countryside on horseback or were pulled to the fields in mule-drawn wagons, some outfitted with coal-burning footwarmers. Later, they were chauffeured to the woods in Fords and Pierce-Arrows.

Two years later, William Gould Brokaw started construction on his opulent “Brokaw Castle” lodge on 2,600 acres of purchased land southeast of High Point. It held 15 bedrooms, an indoor shooting gallery, a squash court, and a Turkish bath. Outside was a racetrack and polo fields. Brokaw eventually locked up close to 30,000 acres of quail hunting lands, while another Gould gobbled up 30,000 acres nearby. Not far away, the scion of the Royal Baking Powder fortune, William Ziegler Jr., leased another 30 square miles of quail ground. His neighbor, Clarence Mackay, chairman of Postal Telegraph-Cable Co., ran a 30,000-acre hunting club with kennel space for 100 dogs and a lodge said to be designed by Stanford White, architect of Madison Square Garden. 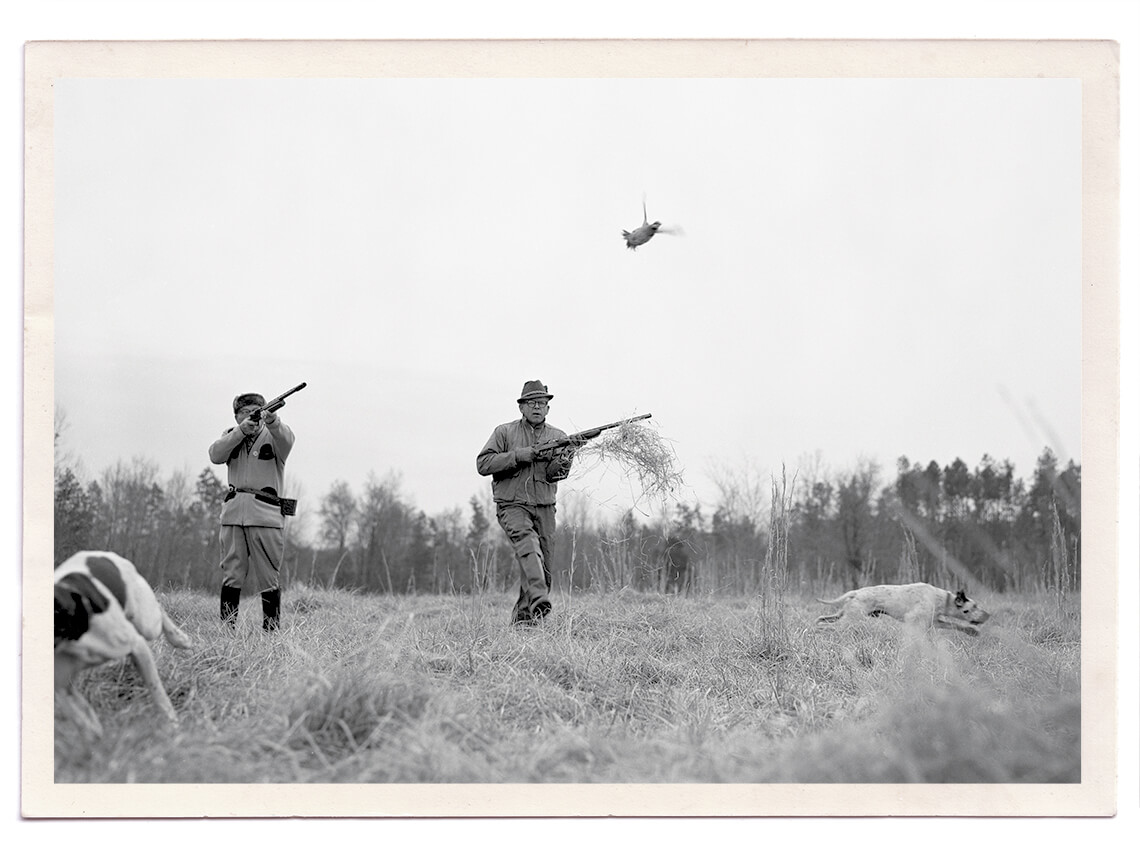 In the 1960s, when they weren’t running their family’s Dodge dealership in High Point, Horace G. Ilderton and his son Carey could be found hunting quail at Ilderton’s Pleasant Grove Shooting Preserve in Chatham County. photograph by State Archives of North Carolina

In 1905, J.P. Morgan’s son, Jack, invested in the Climax Lodge, a comparatively modest retreat near the village of Climax, in Guilford County. By then, 153,000 acres of quail country were leased in Guilford County alone, with $7,500 in lease fees going into farmers’ pockets. During the first decades of the 20th century, in fact, around a quarter-million acres of Piedmont quail woods were under lease — a swath of land nearly half the size of Great Smoky Mountains National Park. No doubt tens of thousands more were leased by clubs whose records have disappeared or were never fully known. Amazingly, there is little remaining of the grand lodges, and little is left to suggest that the rolling farm country of central North Carolina hosted the wealthy and the powerful, drawing hunters and pointing dogs to a landscape that has all but vanished.

But not so the desire to shepherd land for quail. Many North Carolina landowners today pour time and treasure into their dreams of seeing wild quail burst into flight, or hearing a cheery bobwhite whistle from a farmhouse porch. They burn the woods to thin the brush and thin their timber to bring in sunlight and plant wild foods, all to mimic the ancient natural cycles that crafted pinewoods into quail country. Like the landowners of the golden age of quail hunting, they take great pride in the notion that a gallant little avian society might be responsive to their treatment of forest and field, and make its living just out of sight in hedgerow and beanfield.

Wilmington native Robert Ruark may have put it best in his 1957 book, The Old Man and the Boy. “This little bobwhite … was a gentleman, and you had to approach him as gentleman to gentleman,” he wrote. “You had to cherish him and look after him and make him very important in his own right, because there weren’t many of him around and he was worthy of respectful shooting. The way you handled quail sort of kicked back on you.”

Which is part of the allure of quail. They can’t live everywhere, and even when you do all you can to make them feel at home on the farm, they have to dodge every critter with a tooth, claw, or beak, and shake off floods, fire ants, and hurricanes. There’s no promise of a bobwhite’s cheery whistle. You can only set the table and cross your fingers that the gentleman shows up.

Folks who go to the trouble don’t think too much about the lack of a guarantee. Like a bird dog that courses through the woods, utterly convinced that there is a bird to be found in the very next second, lovers of quail and quail dogs and quail woods have been marked with this little bird’s charms. In the woods, following the dogs, they spend their days in pursuit. Not for some gilded version of the past, but for a present and a future where a little bird in a changing world still has a place. And a chance.