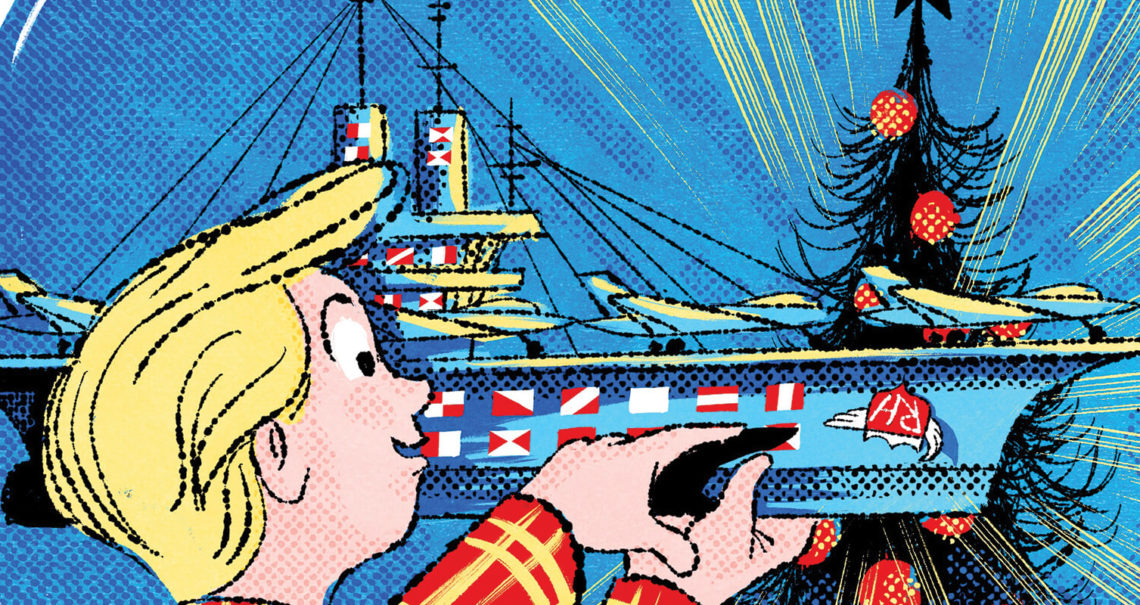 After Christmas Eve dinner, after the midnight candlelight service, after the kids opened their traditional Christmas Eve pajamas, after they were cajoled and threatened and bribed into a sugar-high sleep, the real fun started: putting together the toys. That was the ultimate après-midnight buzzkill. Assembly instructions as long as the Dead Sea Scrolls. And as inscrutable. There goes the Christmas cheer.

In the still of the night, Julie and I would drag out the boxes we’d hidden over the months. Most of the time, we weren’t known as overly lavish parents — certainly not by our children. But we went big at Christmas. Literally. The gifts needn’t be extravagant, but I was adamant that at least one present be XXXL in size or psychic impact. Julie enjoyed the drama as much as I did. And she paid for it. Just like I did.

The worst year involved a double whammy of toys whose assembly required a physicist’s grasp of spatial geometry and a mechanic’s common-sense smarts. Unfortunately, I was a journalism major, and I’m about as handy as an egg. That was the year Markie got some sort of Polly Pocket fairground extravaganza complete with a working carousel, and Jack was on tap for the Rescue Heroes Voice Tech Aquatic Rescue Command Center, which was the size and complexity of a 1980s mainframe computer.

Bring all of this up today, years later, and Julie groans. “No, I can’t even think about it,” she says, turning her face away to some dark place where painful memories are stored. But I can conjure up each detail in vivid relief.

Surrounded by the spilled guts of my truck toolbox, plus a rechargeable drill, eight boxes of AA batteries, a thrice-empty bourbon glass, and a machete — Jiminy Cricket, who makes the tape they use on toy boxes? — I am maybe a quarter of the way through this annual tradition. Simply organizing the 3,000 separate pieces of the two toys has brought on migraines and blasts of back pain. Every tiny Polly Pocket piece is affixed to cardboard with a rubber bandy thingee that’s tough as bear sinew and ratcheted down so tightly that it takes wire cutters to free each part. They ping across the living room like bottle rockets.

Then come the words that strike fear into every Christmas Eve parental heart: “Did you buy batteries?”

The various components of the Rescue Heroes miniature aircraft carrier — with its searchlight, buoy launcher, and working crane — aren’t so heavily fortified, but there are plenty of them. Putting it together is a 90-minute mash-up marathon of pick-up sticks, Rubik’s Cube, and Jumanji that requires, midway through, a late-night phone call to an architect friend. He’s the closest thing I can think of to a physicist.

Julie and I take occasional breaks to push our bent bodies upright and walk up and down the hallway to work out the kinks. We’re nearly finished when come the words that strike fear into every late-night Christmas Eve parental heart.

“Did you buy batteries for this Polly Pocket thing?” Julie asks. “Says here it requires four AAA lithium-ion batteries with rare-earth metal contact points dusted with kryptonite. You have any of those in the basement?”

“I’m in charge of Rescue Heroes,” I reply. “You’re on deck with that Polly business.”

Sending her off to the only convenience store open in the middle of the night on Christmas Eve — a sketchy spot decorated with Mad Dog 20/20 posters, next to a tattoo parlor on a dark stretch of road — was a definite low point in our marriage. Nearly 15 years later, it’s Julie’s go-to excuse for avoiding, well, anything she doesn’t want to do. “No, you take out the trash,” she’ll say. “I bought those Polly Pocket batteries, don’t forget.”

I would have thought that the Polly Pocket experience would have tempered Julie’s embrace of projecting all of her holiday hopes and dreams onto our children. But that wasn’t the case.

Julie was adamant that Markie would learn to love a doll baby. The problem was that Markie couldn’t have cared less about a make-believe miniature human. Her all-time favorite toy was an interactive zoo veterinarian game in which participants took turns setting broken bones in giraffes and performing minor heart surgery on penguins. But in the American Girl doll series, Julie saw hope. She was going to relive her childhood — plus accessories! — and her daughter was coming along for the ride, like it or not.

One Christmas, Julie swung for the fences. She and her mom bought the entire American Girl Kaya Historical Character display. Surely a Native American theme would make Markie’s heart go thumpity. Kaya was adorned in a fringed faux deerskin dress. Her Appaloosa mare had a shiny brown coat and eyes as sparkly as a unicorn’s. She even came with a fake bison horn cup with hand-beaded fringe and faux suede strap, surely a slam dunk in Markie’s world. True to our passion for dramatic Christmas mornings, we spread out the entire pageant on the living room floor: Kaya beside her two-foot-tall tepee. The horse. The extra winter accessories. You could practically hear the bison thundering around the sofa.

Nothing doing. Short version: Markie did not play with Kaya a single time — not one prairie ride across the living room carpet, nary a snuggled-down night in bed talking to Kaya about her hopes and dreams. Nada. Instead, on that fateful Christmas morning, she pulled out an accompanying little fake campfire, about the size of a Ping-Pong ball. That was the gem. There was the magic. For years afterward, that plastic campfire was the treasured centerpiece of Markie’s gatherings of bugs, hamsters, geckos, and more of those freaky Troll dolls than I could count. Poor Kaya and her trusty steed lived in a dark closet somewhere. She remains in mint condition. Her hair has never been brushed.

I think Julie learned her lesson, but I’ve been too scared to ask.

Jack shrieked with glee from halfway down the steps — precisely the reaction I dreamed of with our XXXL Christmas mornings. He grabbed the nearest Rescue Hero figurine and zoomed it in for a landing on the perfectly arranged aircraft carrier in the middle of the floor.

Then he stopped short. Cocked his head. Picked up the entire apparatus, which was nearly his size, and stared at something along one edge of the ship.

“This decal,” he said, pointing to one of the aircraft carrier’s 368 decals that I’d hand-applied at 3 a.m. under the influence of whiskey and insomnia. It was maybe the size of a green pea. Julie and I held our breath.

I miss those days. I promise.