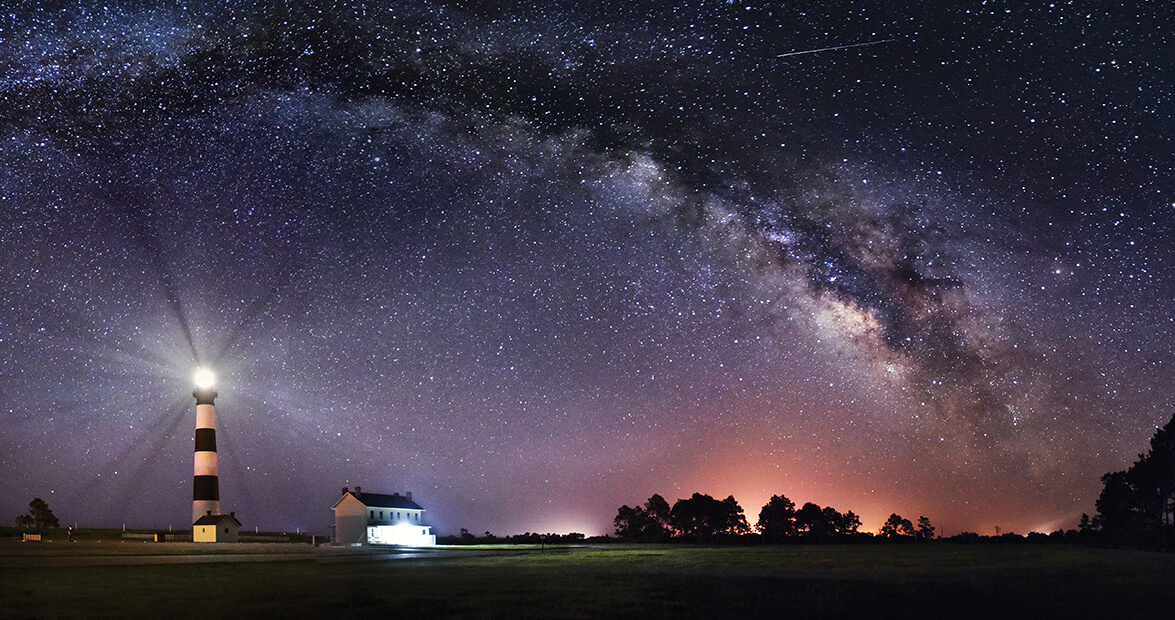 At the time, we weren’t thinking about falling stars. It hadn’t occurred to us that our beloved Earth was, at that very moment, careening through the debris trail of a giant asteroid a few million miles in space.

We were thinking about ducks, and small boats on dark rivers, and trying our best not to hit a half-submerged log or sandbar as we motored our small skiff through a mid-December night. It was 4 a.m., or thereabouts, and Lee Davis and I were threading the serpentine, narrow turns of the Eno River, where it spills into the mudflats of Falls Lake’s upper reaches. A couple days earlier, we’d spotted ducks feeding in a series of remote sloughs miles from the nearest road. Now Lee swept a powerful searchlight from shore to shore, watching for hazards. Ice rimmed the riverbank. Our breaths boiled out in great clouds of vapor. In those conditions, a flipped boat could be deadly.

And then, suddenly, the first searing meteor clipped the edge of my vision, off to the west. My reaction, I suspect, was the same as anyone’s whenever a falling star catches them unawares. My breath caught in my throat. I wasn’t certain of what I’d seen. “Hey!” I hollered to Lee. “A falling star! Did you see that?”

And before either of us could make a wish, down came another streak of fire. And another, and then another. We cut the boat motor to an idle, and for the next half-hour we watched as a falling star sliced the dark heavens every 45 seconds or so. Far from town, nowhere close to a streetlight, we had the best seat in the house. The meteors were mirrored in the onyx shimmer of the river, as if each falling star were racing itself across the night.

It was an entirely accidental brush with one of nature’s most impressive phenomena. When we shoved that boat into the river, we had no idea that a meteor shower was forecast. It wasn’t until after I got home and did a little research that I learned that this was the granddaddy of them all, the Geminid meteor shower, an annual mid-December showstopper capable of producing up to 120 meteors an hour. It’s such a dependable event that state parks and science museums organize Geminid-watching outings during the peak of the show. Bundled-up stargazers trek to Medoc Mountain and Jordan Lake and dark ridgetops all over the state to crane their necks as the skies rain fire. 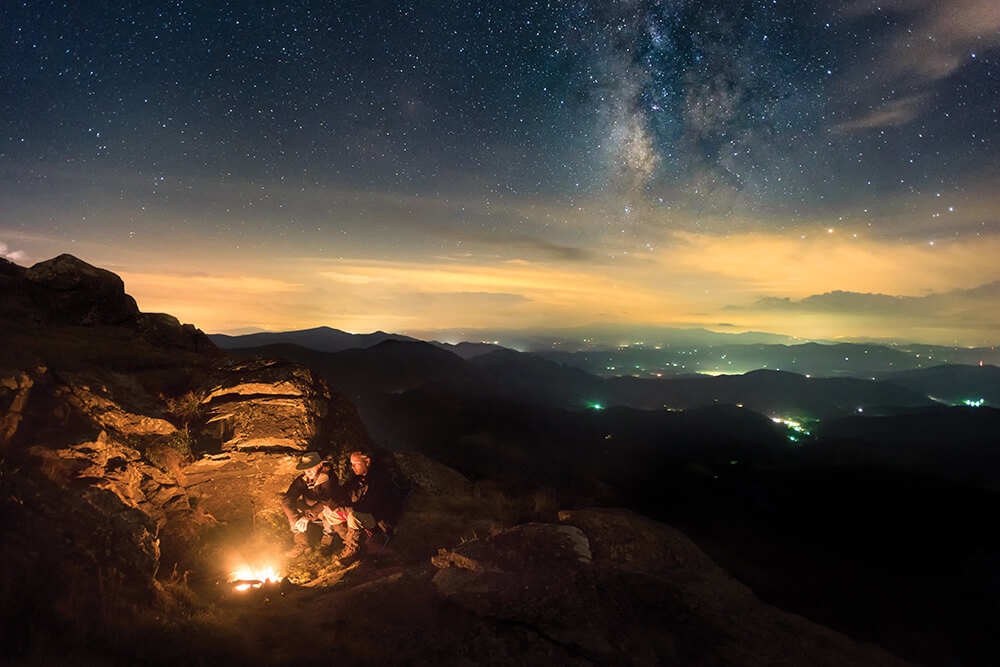 The world seems small when you’re huddled around a campfire on Grassy Ridge in the Roan Mountains. To the west, the Black Mountains and Mount Mitchell. Beyond, the universe. photograph by Tommy White

But for Lee and me, the Geminids were a serendipitous, unplanned visitation of awe and wonder. Most meteor showers occur when Earth moves through the orbital path of a comet, and the debris from the comet’s tail vaporizes in our planet’s upper atmosphere. But the Geminid meteor shower is something altogether different. It’s caused by the intersection of Earth’s orbit with the orbit of a three-mile-wide asteroid called 3200 Phaethon. I know this is starting to sound like a Star Trek script, but stick with me for a minute. 3200 Phaethon, as it turns out, gets closer to the sun than any other named asteroid. That’s 13 million miles, which is whisker-close in the astronomical world, and close enough to heat up the surface of 3200 Phaethon to nearly 1,400 degrees Fahrenheit.

A rock that hot is going to crack like a dried-up August cornfield, and shed chunks of fractured asteroid in its wake. And then, just about the time the first fuse blows in the icicle lights we strung along the roof gable, along comes planet Earth. The orbits of 3200 Phaethon and our little home globe collide. Pieces and parts of the asteroid vaporize in Earth’s outer atmosphere. The December night sky goes a little crazy.

All of this happens miles above the Earth, but the spectacle stopped Lee and me in our tracks. That’s a response as old as the human species, I suspect. Stars served our ancestors as a predictable means of ordering an often unpredictable world. They could elicit terror or solace. These days, unfortunately, many of us feel lucky just to get a decent, dark, unobstructed view of the night sky every now and then. Forget what the appearance of a planet on the horizon might portend.

I’m happy to be occasionally startled by the sudden appearance of an unmarred view of the Milky Way.

There have been periods in my life when I might have been more fully aware of the dates for the Geminid meteor shower. I’ve embraced stargazing as a hobby in fits and starts. I’m fascinated by the mythology that stands shoulder to shoulder with the science of astronomy, and particularly the ancient stories entwined in the galaxies above. There are 88 constellations recognized by the International Astronomical Union, and they include quite a cast of characters from ancient Greek and Roman mythology: 14 humans, two insects, nine birds, 19 land animals — from bears to giraffes to crows to lizards — 10 marine animals, two centaurs, a snake, a dragon, a winged horse, a river, 29 inanimate objects, and the hair of Berenice — who’s not exactly a household name. Berenice had dedicated her hair to the goddess Aphrodite, and had it placed in a sacred temple. When it disappeared, folks believed that it had been carried to the heavens and fixed among the stars.

No wonder figuring out the constellations seems so complicated.

Over the years I’ve tried to learn the names and locations and stories-behind-the-stories of the night sky’s spectacles. I’ve bought who-knows-how-many of those rotating planisphere star charts. I’ve read books and downloaded stargazing apps for my smartphone. I once set out to learn a different constellation each night. That didn’t last. I might know a bit more than your average bear about Ursa Major, but not much. Eventually, I gave up on my inner Copernicus. These days, I’m happy to be occasionally startled by the sudden appearance of an unmarred view of the Milky Way. I’m an accidental stargazer.

And there’s no better time for general sky-gawking than December. The nights are clear and long. There’s a steady schedule of astronomical headliners: Mercury will be visible in the western sky early in the month. On deck is the last of the year’s three full supermoons. The December solstice. The Ursid meteor shower will peak on the night of December 21. And a new moon’s dark sky on December 29 will help the Milky Way put on a show.

On the Eno, I remember one meteor best of all. It was what astronomers call an “Earth-grazer,” a meteorite that skims the top of the Earth’s atmosphere, burning longer out there in the thinnest of air, arcing slow and bright across the sky. This one left a trail so brilliant that after it blinked out, I could close my eyes and still see its vivid afterimage streaking across my retinas.

I don’t recall whether the meteor shower began to fizzle, or Lee and I began to get anxious about the rest of our dark trip, but at some point we fired the boat motor back up and eased downriver. We shook our heads at what we’d just witnessed, oohed and aahed for a few more minutes, and then it was back to the business at hand.

But I’ve thought about that encounter with the Geminids over the years, and especially this time of year. No matter where we go these days, we pass house after house twinkling with lights in the yard, on the roof, sparkling and glittering from homes and barns and mailboxes. There are Christmas trees glimmering through windows and wreaths bathed in spotlights. We go to great lengths to light up our midwinter lives. At home, my wife, Julie, burns candles from every available horizontal surface — she’d balance a balsam-scented votive on the cat’s back if she thought he’d stay still long enough — and strands of lights wind around our back deck, inside staircase, and front railings.

It’s all in the name of merriment and celebration, but I also think we’re attempting to capture a fragment of the awe and wonder that struck Lee and me when the stars rained down on the river. All those twinkling lights on our homes and trees, the candles, the Moravian stars, the angels, the luminaries along the streets on Christmas Eve — it’s as if we are trying to bring the best and the brightest parts of heaven down to Earth.

Which, of course, was accomplished a long time ago.

Feature image: The Bodie Island Lighthouse shares the night sky with a sea of stars. Photograph by Tommy White.