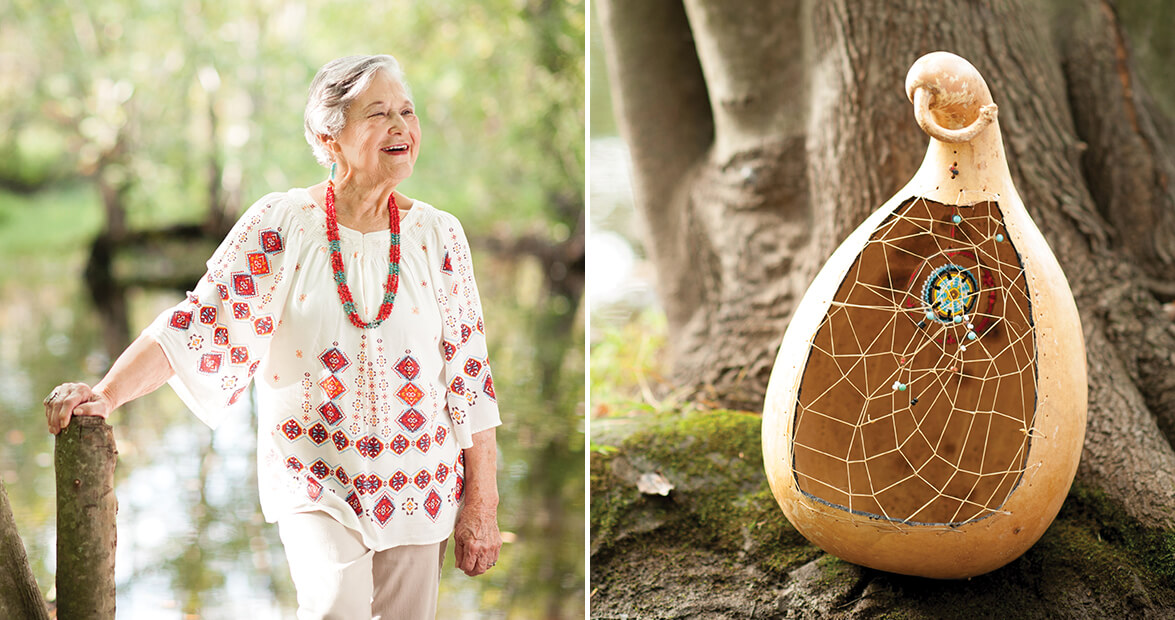 At the end of the day, at the edge of the cotton field, Joyce Locklear’s daddy would put her on the back of a mule named Molly, and he’d smack the animal with a tree branch to make her run. “She’d trot-trot-trot to get to the road out yonder,” Locklear tells me, pointing beyond the field outside her living room window, “and then she’d run like everything. I’d catch hold of her mane and hang on as she’d run down the road and right up to the gate. She knew where home was.”

This all started when Locklear was 8 years old, maybe 9, she recalls. It’s hard to remember exactly; after all, it was 70, maybe 75 years ago. This was back when there were still white lines and black lines at restrooms in nearby Clinton, but no accommodation at all for Indians. This was before the state shut down the East Carolina Indian School just a few miles up the road, before Locklear married, before her children would break her heart with their stories of being bullied and taunted for their Indian heritage, before she started a 36-year career as a cultural educator for Coharie youth in Sampson County, before she helped spark an artistic revival within her Coharie tribe, and before she dreamed of the intricate steps and flowing moves of Indian dances and wrote them down in the early light of morning before they left her forever. As a child, riding a mule bareback along her daddy’s cotton and tobacco fields, the middle child of Lloyd and Mary Brewington learned to hold on.

Locklear is 83 years old, with a sunny face and a mischievous glint in her eyes that matches her turquoise-and-crimson drop earrings. We sit in her trim kitchen a few miles northeast of Clinton, a few hundred yards from the winding, blackwater Great Coharie Creek, in a landscape of sprawling farm fields and tangled woods that is the geographic and spiritual center of the Coharie Indians. In every direction, she tells me, the homes are occupied by the Coharie. In fact, you can drive south from Spivey’s Corner toward Clinton on U.S. Highway 421 and never know you are in the land of her people.

I’d driven that route any number of times, unknowing, to go dove hunting with Locklear’s youngest boy, Stevie, a friend from church. In 1952, Locklear married a Lumbee man, George Willard Locklear, who was a teacher and principal at the East Carolina Indian School, so Stevie is half Coharie and half Lumbee. I’d bet fewer than 10 people in our church of 2,000 had any idea of his Indian heritage, or how vibrant and cohesive this small band of about 3,000 Coharie remains in the sandy rolling lands of Harnett and Sampson counties. I sure didn’t, until I met his mother.

The Coharie are one of eight Indian tribes recognized by the state of North Carolina: Eastern Band of the Cherokee, Coharie, Lumbee, Haliwa-Saponi, Sappony, Meherrin, Occaneechi Band of Saponi Nation, and Waccamaw-Siouan. (Only the Cherokee have full federal designation.) The Coharie tribe descended from the Neusiok Indians, and moved to the area they now call home between 1729 and 1746.

Locklear pulls out old photos from her childhood days. She points out her mother and father in a school photo of the New Bethel Indian School, from about 1916. She grew up immersed in farm life, in the Indian school, and in the churches from the four communities that served as the compass rose of Coharie life — Holly Grove, New Bethel, and Shiloh in Sampson County, and Antioch in Harnett County.

“We knew we were something different,” she says softly. “Something special,” she says defiantly.

As a child, she recalls few whites in her community, “but we knew we were something different,” she says softly. “Something special,” she says defiantly. When her father, a stalwart in the Coharie community, took her to Clinton to see the Christmas decorations, he had to force his way through separate lines of blacks and whites so that Locklear could speak to Santa Claus. As we drove the back roads along U.S. 421, she pointed to a line of tall pines where white kids would hide and throw mud pies and rocks at Locklear and her siblings. They learned to take a long, sweeping four-mile route back and forth to school to avoid the abuse.

We take a long sweeping ride through the land of the Coharie, along the roads where Locklear rode Molly, to the site of the sharecropper’s house where she was born, to the church where she was raised. At the Coharie Tribal Center, now housed in the renovated East Carolina Indian School, we meet a few ladies quilting in a bright room hung with dream-catchers, and tour a small museum space filled with carved gourds, regalia, and photographs of dancing exhibitions.

Eventually we pull into the parking lot of an office building off U.S. 421 and park in a corner. A footpath leads into the trees. We walk into a dark swamp forest draped with vines like curtains. Locklear points out mullein and wild grapes. Red trumpet creeper blossoms are strewn on the ground. The Great Coharie flows past, paisleys of dark current flashing in the sun. For more than 250 years, the Coharie swam and fished and played in the river. They were baptized there. “We would come down here to the river and feel at home,” Locklear says. Torn from their own history like a page from a book, the Coharie found comfort in the cool canopy of oaks and tupelos that lined the braided stream.

Locklear raised five children hardly a half-mile from where she was born and raised, and in 1975, something wonderful happened, for both Locklear and the Coharie: She was hired as a cultural and educational liaison between the county schools and the young people of the Coharie communities. Over the next 36 years she visited 40 states to learn how other Native American tribes worked to sustain their cultures. She traveled from Washington, D.C., to Florida, leading thousands of kids from Sampson County schools on field trips. They met with congressmen. They danced at the White House. She taught classes in beadwork and drumming, gourd carving and Native American dance — including the Basket, Gourd, Snake, Corn, Blanket, and Round dances. And along the way, she was a fierce competitor in the dance contests held during the annual Coharie Powwow. More recently, she’s represented the tribe as Mrs. Senior Coharie and as the North Carolina Senior Citizen Coalition Princess of the eight North Carolina tribes.

Even today, she says, she’ll run into her young students, now all grown up. She’ll see them at restaurants or at the gas station. Often, they’ll pay for her dinner or fill up her car with gas. “Happens a lot,” she laughs. “I think they remember all those good times.”

Maybe. But I think they want her to know that they learned what Joyce Locklear wished to teach. Where home was. What home was, and is, for the Coharie tribe. And what’s worth holding on to for all of your days.