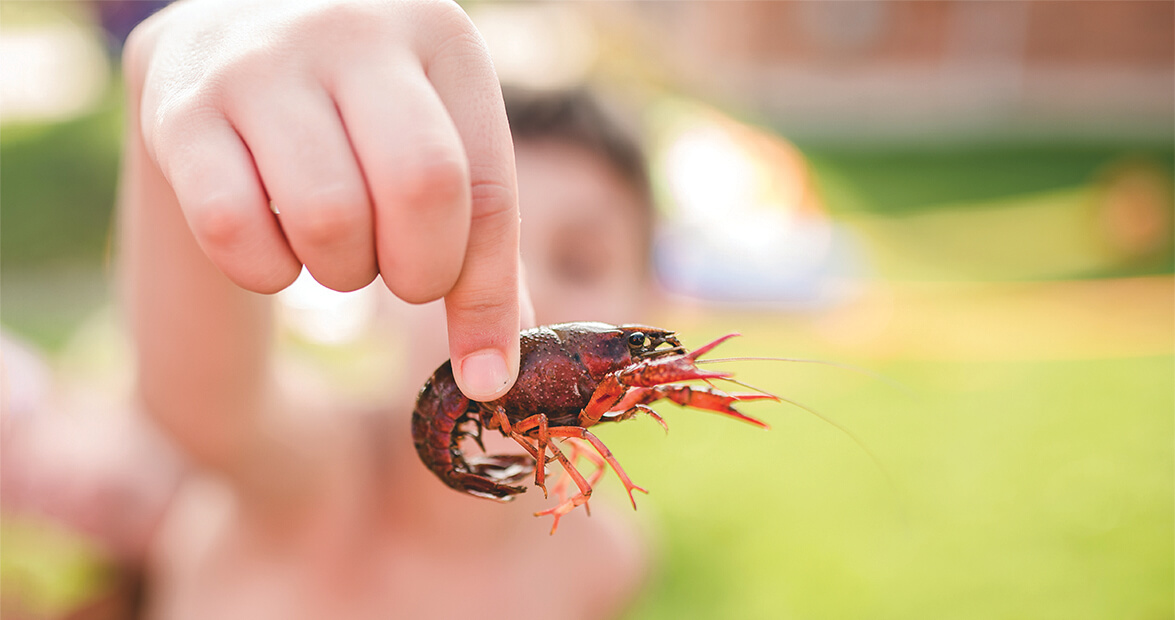 You couldn’t be a scaredy-cat.

You couldn’t flinch or hesitate. That was a good way to get pinched, and a decent-size crawdad can draw blood. You didn’t have to catch them by hand, of course. It’s possible to net crayfish, or pin them down with a stick. You can catch a crawdad by scooping up a double handful of muck and silt with the crustacean all mixed in, and hurl the whole mess toward the creek bank.

But we all knew the hard truth: Those were the sissy ways. It was best to simply muster your courage and go in for the quick catch. It was a valuable lesson to learn, even for a bunch of kids: There’s something to be said for the direct approach.

The creek that runs beside my childhood home in High Point is a headwater tributary of Boulding Branch, whose waters eventually make their way to the Deep River, then to the Haw, to the Cape Fear, and on to the Atlantic Ocean south of Wilmington. As a kid growing up in the ’70s, however, an era in which Mrs. Lomax’s locked cabinet of bottled turtle and snake specimens was about as high-tech as sixth-grade science got, such larger ecological connections went largely unconsidered. Growing up, I spent at least 10,000 hours in a 200-yard stretch of that creek, but I had no clue where it went once it crossed under Lexington Avenue. I didn’t even know its name. But it was the perfect size for little kids to explore. Too shallow for true danger, it nonetheless was cloaked with willows and blackberry. Bullfrogs lurked along the deeper pools, and their tadpoles were so large you could barely hold three of them in your fist. At the place where the sewer pipe crossed the creek, an eddied-out hole was gouged deep enough to hold a few catfish and bluegill. In the winter, it would freeze solid enough that you could walk on it. In the summer, on a good day, you could catch half a dozen water snakes and green snakes with no more than a couple hours worth of hard effort. To me, the creek beside my house was a world of its own.

It was hardly a healthy ecosystem, though. An urban creek, heavy rains would swell it to a raging torrent that sometimes crept into our backyard. In summer heat, it was a stagnant slough. But this was back in the days when seat belts were those things you stuffed behind the seat so the hot metal buckles wouldn’t burn your bare legs on the way home from the pool. Nobody thought about stormwater pollution. If the kids wanted to wade around in stagnant water and catch crawdads, have at it. Just watch out for poison ivy and broken glass, and you’d better be home before the streetlights came on.

This was how you did it: Moving gently upstream, on bare feet so summer-tough you could run the ice cream truck down on a gravel road, you gingerly turned over every rock larger than a softball. It was critical to lift the downstream end of the rock first, so the creek water would swirl into the void and stir up a plume of sediment that unspooled between your legs. For a few seconds, you stood as still as a great blue heron, heart pounding as the water began to clear. You got your mind right for the grab. You had to grasp the crayfish in the sweet spot right behind the pincers. Too far back and too far forward were all the same, and a five-inch crawdad would light you up.

We had neither reason nor motive for catching crawdads. This was before I was much of a fisherman, so we never used the crawdads for bait. At the time, I’d never heard of anyone eating them. We weren’t using crayfish densities to monitor water quality, or map out species distribution. Mostly, we’d build little oval rock dams, say two feet wide, and dump in the biggest crawdads in the hopes that they’d clash like tiny segmented gladiators. Every now and then a couple would square off for a few seconds of sparring, but I don’t remember any epic battles. Mostly, our captives would back under the nearest rock and sulk until we’d get bored and turn them loose. Then we’d head downstream to see who could be the first to catch a tadpole with legs.

We were catching crawdads because that’s why God made creeks and long summer days and blue jean shorts your mama cut off with her kitchen scissors. We knew back then what $200-an-hour child psychologists know today: Catching crawdads was the highest, best possible use of a few empty summer hours.

Nothing stays so simple, though, does it?

Since then, of course, I’ve mucked up the purity of crawdad catching with deeper inquiry. It turns out that North Carolina has a royal share of crayfish diversity. There are at least 34 species of native crayfish known to the state, seven of which are endemics found nowhere else in the world. Sadly, it’s no surprise that crayfish in general are on the ropes. Two-thirds of North Carolina’s crayfish species are imperiled enough that the North Carolina Natural Heritage Program lists them for conservation concern.

I learned all of this — and the differences between the lobster-clawed species of the Cambarus genus and those of the less heavily armed Procambarus clan — over a few decades of work as a conservation journalist. I’ve interviewed scores of stream biologists and water quality experts over the years, snorkeling and netting and electro-fishing Piedmont creeks and mountain streams.

There’s data aplenty to underscore the stresses afflicting North Carolina’s creeks and small streams. But one of the most troubling comments I’ve ever heard a scientist make had nothing to do with science at all. Once, while surveying creeks up in the Uwharries, John Alderman, a biologist and longtime advocate for small-stream conservation, stopped on an overgrown creekside trail and shook his head. “I spend a lot of time walking along creeks and rivers,” he said grimly. “I see rope swings rotting out of the trees, and places where weeds and shrubs have grown back on the banks where kids used to play. I hardly ever see the footprints of children.”

It’s hard to imagine. It’s not only sad to think about, but it also makes me worry. You see, back when I was knee-deep in Boulding Branch for hours at a time, days and weeks at a time, catching bullfrog tadpoles that my brother and I sold to our neighbors door-to-door at two for a quarter — who wouldn’t want a bullfrog tadpole? — back then I didn’t know nitrogen loading from Adam’s house cat. I didn’t know non-point pollution from a hole in the ground. I’m quite certain that no one on my street, adult or child, had ever heard the terms “stream buffer” or “algae bloom.”

But at the time, during those blissful innocent days, all I knew was that I had to focus on the sweet spot, right behind the claws, and put aside my fear and make it fast. Because a bragging-size crawdad wasn’t stupid. He wasn’t going to sit there forever, while I built up the nerve and made up my mind.