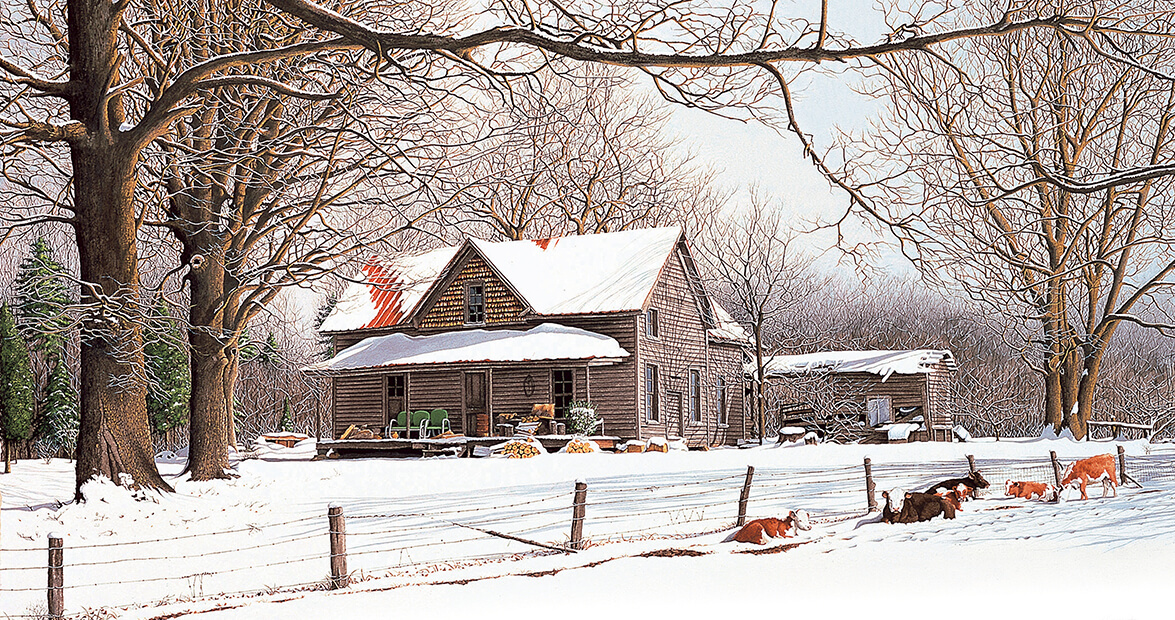 It’s been a long time, he tells me. He can’t remember the last time he was here.

We’ve pulled into a dirt driveway, off a country road where the land begins to pitch and roll toward High Rock Lake. I can barely see the big log house around the large cedar trees that crowd the drive.

“Looks like we’re too late for blackberries,” I say, filling the silence, nodding toward an old wire fence groaning with vines.

He looks over. “That was a split-rail fence back then,” Bob Timberlake says. “Back when I had the place.”

Bob Timberlake turns 80 years old this month. He was born on January 22, 1937, in Rowan County, but has always called Lexington home. It’s a town he still calls home, despite a life that has taken him far from Davidson County. Timberlake is arguably the South’s most celebrated artist, a North Carolina native son whose successes as a painter and furniture designer are legendary. I’ve given some thought over the years as to why Timberlake’s work speaks so deeply to so many North Carolinians. I’ve given it even more consideration over the past few months, as I’ve been working with Timberlake on a retrospective book that explores his relationship with the landscape he calls home. For many people — myself included — Timberlake’s work describes and invokes much of what is essential to the North Carolina experience. 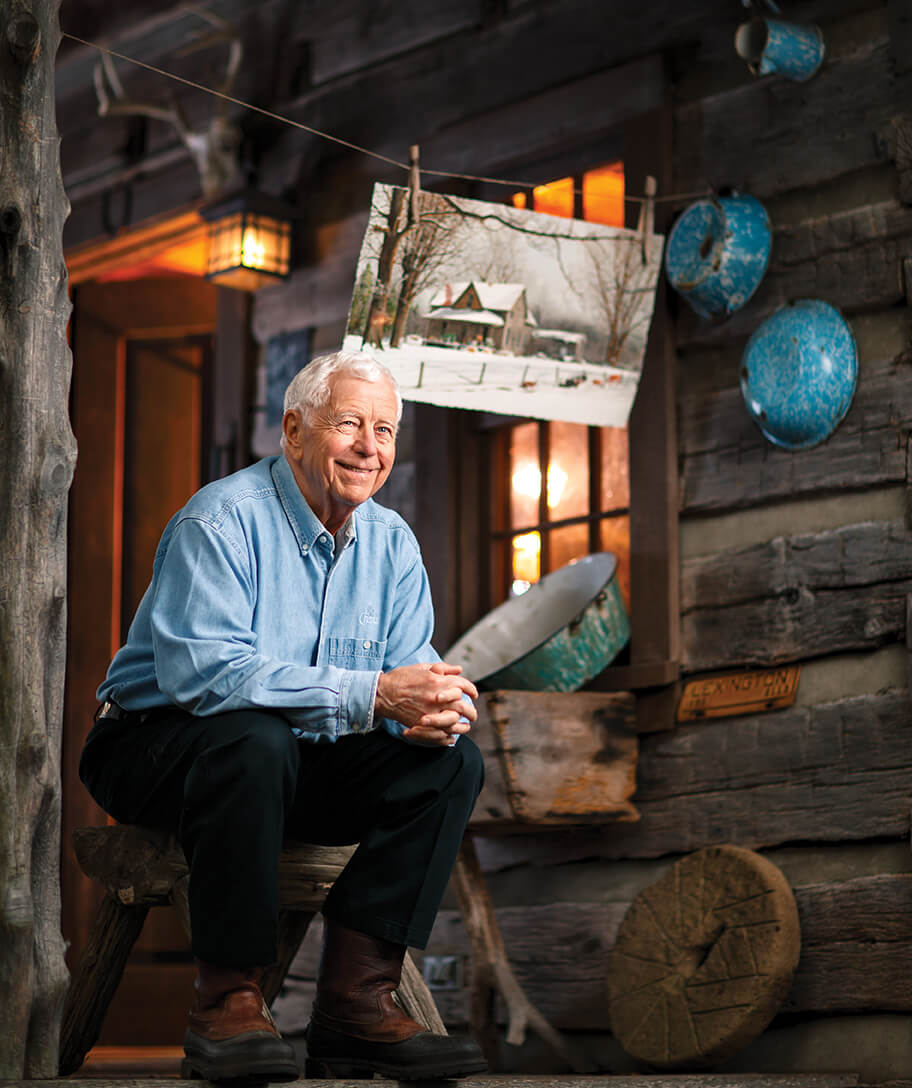 The 200-year-old log cabin at Riverwood, Bob Timberlake’s farm, has been a source of inspiration for the artist since the ’70s. photograph by Jerry Wolford & Scott Muthersbaugh

One day, Timberlake and I drove south out of Lexington into the wooded, corrugated farm country of Davidson County, and turned into that driveway by the blackberry fence. Riverwood, Timberlake called the farm he rented from 1972 to 1989. He turned its 200-year-old log house into a studio, and spent long days wandering the pastures and woodlands with his neighbors, Dan and Gilley Melton and their granddaughter, Wanda, who lived close to the property in a clapboard house with a rusty tin roof, no running water, and no electricity.

While at Riverwood, Timberlake painted some of his most iconic works: Mr. Garrison’s Slab Pile, Somewhere in Time, and Late Snow at Riverwood, a scene of the historic farmstead in an early spring snow that was so popular it sold out in six weeks.

Once, a proud farmer would have taken care of every loose board and rusty nail, but it’s a different time in Gilley’s Cows.

Perhaps my favorite Timberlake work is Gilley’s Cows. It’s a painting of the Melton homeplace in a half-melted snow, a leaden sky overhead, tangled with bare tree limbs, and six cows huddled in the meager lee of a barbed-wire fence. The entire scene seems frozen, awash in a bitter cold, as if it might shatter like pond ice at any moment. There’s a branch that arches across the entire upper foreground, framing the house, drawing your eye toward the front door and the empty green chairs on the porch. It is, at once, a landscape and a still life, and also an intimate portrait of the Meltons and the spare life they lived. That is no small trick, given that there is not a single person in the painting.

I get a physical chill when I look at this painting. The cows have left a few tracks in the pasture, but the snow in front of the farmhouse is a white sprawl so clean and crisp that it makes me strain to hear the sound of crunching boots in the snow. That big tree branch, the way you can almost see through the woods in the background, it all draws my eye toward the house. And that’s where I read the story. The snow on one side of the roof is thinning, the rusty tin showing through: Someone is home. Someone is warming themselves by the woodstove inside. But no one has yet to venture outside.

Behind the cabin is a large shed and well house, the snow mounded up on the ragged ends of rotting rafters. An old tire shows through missing clapboards. Once, a proud farmer would have taken care of every loose board and rusty nail, but it’s a different time in Gilley’s Cows. That old tire and that run-down barn speak of hardscrabble lives and want. The Meltons are hanging on. In the same way they are hunkered down inside that warm house, they are hunkered down against the cold storm of change and the rush of the modern world that lies beyond those snowy woods.

After a long period of throwing himself into his furniture designs, Timberlake is painting more than he has in years.

It’s just an old farmhouse on an overlooked country road, but it speaks of so many other old farmhouses, moldering in oak woods and pine woods, mountain woods and swamp woods, tumbling in on themselves, crumbling in lonely heaps of worn-out brick and clapboard and memory. So I look at Gilley’s Cows and I don’t dare breathe, because my slightest movement might give those cows some reason to shift position, and they might shuffle out of the scene, or cause Gilley to open that front door to see what’s causing a fuss, and I don’t want anything about Gilley’s Cows to change, not ever, because I know in my bones that nearly everything about this world has changed already.

I’ve learned that such melancholy is totally out of character for Bob Timberlake. This is one happy man. He is a grandfather seven times over with his first great-granddaughter. The studio he built after leaving Riverwood kicked off a subsequent period of artistic fervor that has yet to abate. He travels widely to hunt, to speak, to lend his name to philanthropic causes. He works every day. Timberlake has plans. After a long period of throwing himself into his furniture designs, he is still at the easel, painting more than he has in years.

We don’t stay long at Riverwood. The place where Timberlake spent his seminal years as an artist, and painted some of his most recognized works, is someone else’s now. It’s hard not to feel like interlopers. We back out onto the blacktop and turn toward Lexington. As the road curves to the east and crests a slight hill, Timberlake points to a pasture corner where a faint path leads away from the road.

“That’s where Wanda would get off the school bus,” Timberlake says. “Every day the cows and horses and chickens and goats would be waiting for her. It was a sight to see.”

Timberlake and Wanda grew to be great friends over his years at Riverwood. “She was a wild child,” he remembers, “always running through the woods, bringing me turtle shells and everything else she found.” Timberlake and Wanda shared custody of an ever-changing roster of dogs that people abandoned in the country. She tended pots and pitchers of picked wildflowers.

In 1973, Timberlake painted an elegant, arresting portrait of the young Wanda Melton. It’s another of my favorite Timberlake works, one some folks might find surprising. It surprised me. Timberlake has painted very few portraits. He painted Dan Melton a number of times. He painted Mrs. Edna Shoaf Dorsett at her quilting table.

He painted Wanda at the well house, the one in Gilley’s Cows. It’s a stark painting. The shed’s interior is nearly black in the deep shadow, but strong sunlight washes out the colors in Wanda’s floral print dress. She gazes intently toward something outside of the painting. Wanda stands on a makeshift step, her left hand slightly lifted off a rail, the big toe of her left foot crooked over an old board, and the pose seems to suggest that she is ready to launch into whatever life has in store, feeling the strength of being rooted to a place she loves.