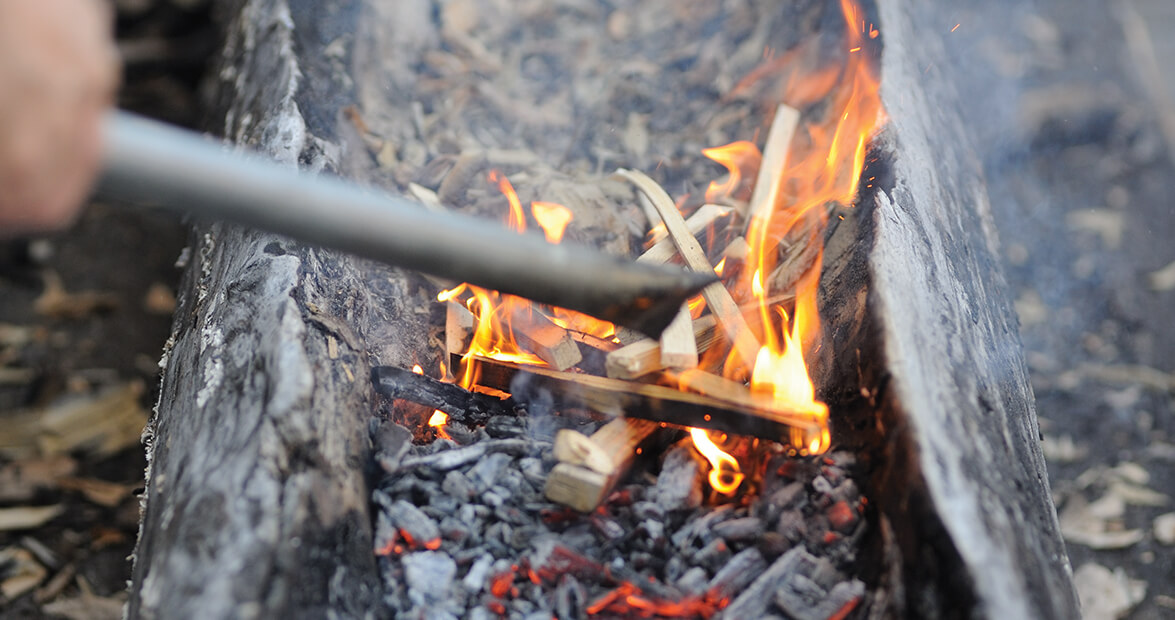 It could have been an old wharf plank. That was my first thought. I was in my johnboat, threading the vernal canyon of the Cape Fear River somewhere south of Fayetteville, when a dark piece of timber caught my eye. It breached the high-water line of a river sandbar. It seemed a little out of place.

There was no shortage of old wood in those parts. Cypress knees, gum trunks, and moldy fallen trees lined the river’s banks. But there was something about this chunk of wood. Its lines seemed uncharacteristically straight, while the end had a familiar rounded look. I motored over and hopped out of the boat, my feet crunching mussel shells scattered among raccoon tracks.

An old piling would be a pretty cool find, I thought. Perhaps a weathered board from a wooden skiff. Some folks collect arrowheads or seashells. I collect half-rotten barn planks and chunks of old brick. I always have big plans for these pieces — panel an office wall, build picture frames — but I rarely do anything with them. Instead, they are strategically scattered around so that my wife, Julie, won’t catch on to how much old wood and rusty metal I’ve squirreled away.

With bare hands, I dug the stump from the sand. When I flipped it over, I sucked in my breath. I knew in an instant. I’d read about these things for decades. I’d seen drawings of them in history books and museums. Now I rubbed my hand in the hollow cavity, felt the marks left by the adze. I could hardly believe it. I’d found part of a dugout canoe.

There’s a deep connection between North Carolina and dugout canoes. Long before Lewis and Clark headed west, Native Americans across North Carolina plied mountain streams and tidal rivers in dugouts. The boats were mentioned in the earliest descriptions of Native Americans in North Carolina. Arthur Barlowe, one of Sir Walter Raleigh’s captains, wrote of these boats “made of one tree,” which were burned till hollow, and the coals scraped out with large shells. John White’s famous water-colors from Roanoke Island, from a different 16th-century expedition, showed Indians burning and scraping out the trunks of whole felled trees, and fishing from dugouts piled with what look to be American shad — despite two hammerhead sharks finning near the boat. 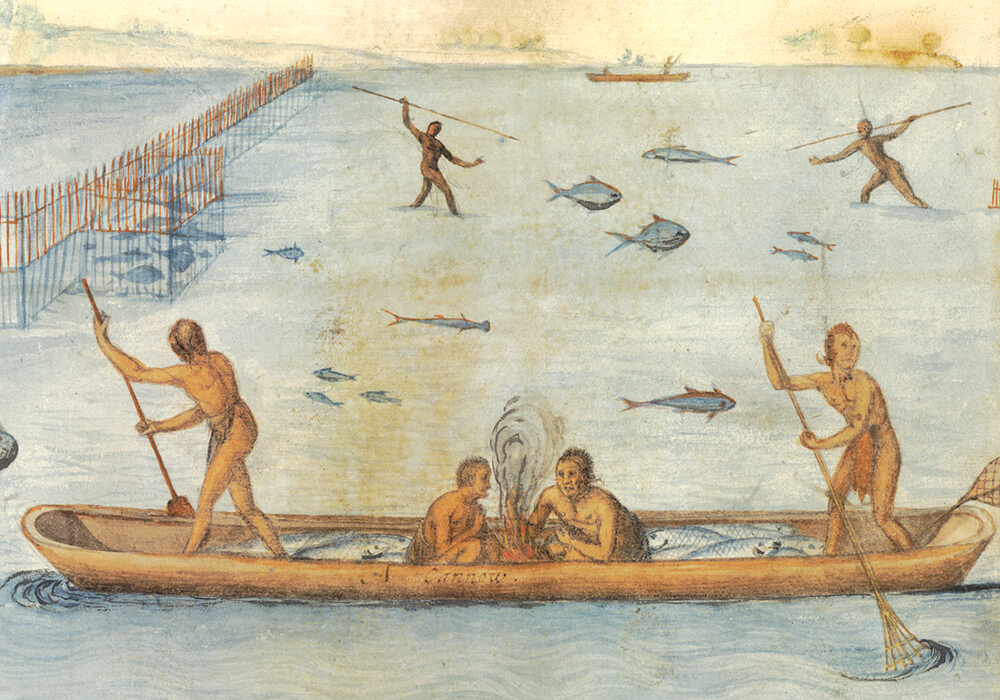 John White’s 16th-century depiction of North Carolina Indians fishing from a “cannow” near Roanoke Island now resides at the British Museum in London. photograph by © The Trustees of the British Museum. All Rights Reserved.

I remember the breathless reports a few years back of the discovery of a cache of ancient canoes in the shallow Carolina bay lakes. A pair was found in 1985, after a low-water season during which levels in Lake Phelps fell due to drought and pumping to fight forest fires. Phelps, the second-largest natural lake in the state, lies between Albemarle and Pamlico sounds. It was fertile land that drew Native Americans, as evidenced by the subsequent discovery of another 28 old canoes in the lake’s acidic waters.

And I mean old: One of the Phelps canoes is some 4,400 years old, while radiocarbon testing dates another to 2430 B.C. One is 37 feet long, the longest Native American dugout canoe known in the Southeast. Archaeologists believe the canoes were sunk to preserve the wood and store the boats between hunting and fishing seasons. The canoes are the second-largest assemblage of their kind known in the South, trailing only a 101-canoe cache in Florida. Just a few years ago, a pair of the canoes was shipped to the state’s Queen Anne’s Revenge Conservation Lab in Greenville, to receive a little preservation TLC beside Blackbeard’s booty.

From prehistory, this part of the Cape Fear River has been plied by dugout canoes.

The Cape Fear shares in this rich tradition of North Carolina river travel. From prehistory, this part of the river has been plied by dugout canoes, then mast-fitted log periaugers, followed by flatboats that rode the tides with holds stacked with barrels of tar, pitch, and turpentine. In 1818, the first steamer built in North Carolina, the Henrietta, was launched in the Cape Fear at the Fayetteville waterfront. A 100-foot side-wheeler, the ship could carry 100 tons of cargo and up to 30 passengers, and traveled between Fayetteville and Wilmington. There are still plenty of touchstones to that commercial era of river travel — I’ve seen old wharf pilings along the river and iron rings fastened to huge trees. Long-vanished river landings have lent their names to bends and bluffs along the Cape Fear, including Neil’s Eddy, where I stood in the sand and levered that wood out of the grips of the past.

So it’s easy to understand the thrill of holding a fragment of that history. For who knows how long, that boat had lain underwater, forgotten, covered and uncovered by the tides and freshets of the lower Cape Fear. I didn’t think twice. I hoisted the sodden wood to my shoulder, and hauled it back to my boat.

Back home, I fretted over what to do with my treasure. The wood was waterlogged, the edges of the dugout soft and rotting. The first step was to prevent the canoe from drying out too quickly, but I was running short on controlled humidity chambers in my backyard. Initial efforts to preserve the Lake Phelps canoes involved coating them with a sugar solution, but that attracted insects. Julie didn’t seem to mind a few barn planks tucked behind the washing machine, but she wouldn’t sign on to a bug-prone, sugar-encrusted chunk of old boat by the laundry folding table. I’ve learned to pick my battles.

The best I could do was to place the treasured canoe chunk under the kids’ backyard playhouse, in the shade of a pecan tree, and hope for the best. For a week or two I babied the artifact, checking on it a couple of times a day. Then we went to the beach for a week, and when we returned, the kids were headed to various camps, so my daily trips to the playhouse turned into once or twice a week, at best. You know how it goes. I was mowing the grass one evening when I spotted the old dugout and was startled by the thought of how long it had been since I’d taken a look.

When I picked it up, the wood was light as a sponge. Then the artifact crumbled into three pieces. I brought the remains into the basement to glue them back together, but over the next week or so, the dried wood turned to splinters. I kept the pieces for a while, but it was no use: No one would recognize them as the bow or stern of an ancient boat. They were just fragments. In a matter of mere weeks, a centuries-old piece of history had moldered in my care.

Looking back, I suppose I should have left it where it lay. The Cape Fear’s tides might have uncovered other pieces of the canoe one day. Or re-covered them forever. But that’s the pull of history on me. With life moving more quickly into the future, I seem to grip more firmly the fragments of the past.

I still have one of those small, unrecognizable pieces of the dugout. It helps me understand why my basement is full of lichen-covered planks, my office littered with frail fragments of old fishing nets and surf-smoothed glass and rusty railroad spikes. Why I collect odd pieces of thrown-out tools and barnwood and not, say, brightly colored agate ware or antique fishing bobbers. Once upon a time, that splinter of wood helped a man make a living and feed his family. Helped him work the land. Kept him tied to the water. These days it might be as light as cork, but I can’t pick it up without feeling the current of the Cape Fear, or the weariness of a day spent with a long pole in hand, the very heft of its history.