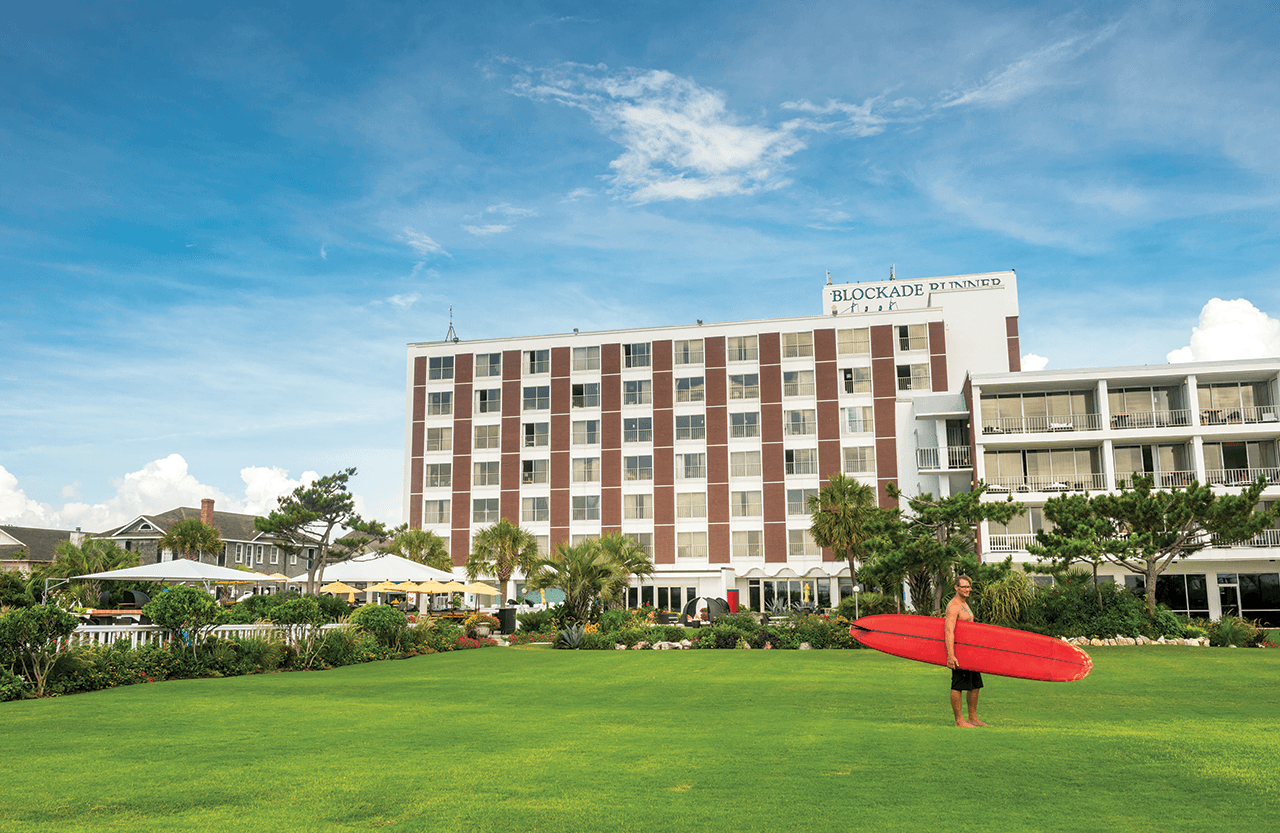 There is a spot, right at the end of the white boardwalk between the Blockade Runner resort and the beach, where you can sit and watch hundreds of individual decisions add up.

“There used to be more sand here,” says a guy in his 50s. He and his wife walk to the shower, spray their feet, then walk toward the hotel. The beach loses two.

Heading in the other direction is a young girl, walking swiftly. “It’s 10:15,” she says. “I’m already late.” The beach gains one.

It will work like this all day, the beach swelling and then emptying, the early birds who came out to watch the sun rise leaving to make way for the sunbathers, who then come back up to the Blockade Runner for a bite to eat. The parents bring their kids in first, usually around 4. Some people stick it out until later. They want sun, they go out. They want food, or something to do, they come in.

The people who work at the Blockade Runner know this ebb and flow, this rising and lowering of tides. Mark Lawson, the executive chef, who’s busy setting up an outdoor cookout, knows the biggest meal is breakfast, which is free. So his kitchen cooks for 400 people, with the expectation that 85 percent of them will come in and eat. Tommy Van Arsdale, the smiling bartender, knows if you’re out near the pool, you’re more likely to order a piña colada or a rum runner. If you wander inside, you’re more likely to drink a gin and tonic or a martini. Andi Cornelius, a guest services manager, knows some guests like to stay on a certain floor, and others like to have their pool chairs reserved, and she has a system to tell her who’s who.

Not that you, the guest, would notice any of this. You’d notice the bright colors outside, the white concrete, the yellow umbrellas. You’d notice the difference between the outside of the hotel, boxy and brown-bricked, and your room inside, bright and modern. You’d probably notice how someone on the staff remembered your birthday or anniversary, even though you can’t remember who you told or when you told them. There’s a restaurant. There’s yoga. There are games for the kids, and kayaking and paddleboarding for the adults. You’d notice you don’t need to leave the hotel to do much of anything.

This is precisely what the Blockade Runner resort is built on — the idea that people still want full service in a world where they’re used to taking care of things on their own. Mary Baggett Martin has been in charge at the Blockade Runner for three decades. A lot of the college students she hires have never known a world where someone else pumps their gas. They’ve never had a bellman open a door for them. She reassures her employees that, “When someone drives under the portico, they’re not alarmed or thinking you’re trying to steal something from them. They want you to greet them.”

This tradition of personal service has been going on in this spot since long before the Blockade Runner. The Seashore Hotel opened here in 1897 with 150 rooms and 100 rocking chairs that were neatly kept in a straight line by a porter. It burned to the ground around 1918. Then came the Ocean Terrace four years later, which was battered by Hurricane Hazel in 1954 and burned to the ground a year after that. Ten years went by with no hotel on the site, because developers were hesitant to build in a spot where another storm might wallop them. Wrightsville Beach’s former mayor knew the beach needed a hotel in order to make a comeback and convinced Lawrence Lewis of Richmond, Virginia, to build the Blockade Runner. On March 22, 1964, it opened.

A group of doctors bought it in 1971 and owned it until 1984, when one of their daughters, Mary Baggett, was brought in to run the place. That September, Hurricane Diana came and parked offshore, dumping rain and breaking windows, and even though Mary and her maintenance staff rode out the storm, the soggy hotel didn’t reopen until January.

Soon after, Mary’s brother Bill came on, and since then, at least one of them has been on site every day. Mary lives down the street. Bill lives in the hotel, in a corner room that’s now his apartment. Bill’s out sailing this weekend, so Mary is here, keeping an eye on things, noticing details that you might not.

“I know I’m more critical than I should be,” she admits. Tuesday is cleaning day. On Wednesday and Thursday, there was enough rain and runoff to lead to a stream of sand on the concrete. She had her staff clean it up. There are two more big resorts on Wrightsville Beach, she says, and she has to compete against chain hotels that offer perks like reward points and lower rates. “As an independent, we have so much more to offer,” Mary says. “We’re like a family for you.”

It’s hard for Mary to see the beauty and not the business here. To her, flowers aren’t things to be looked at, they’re plants that need to be cultivated. “It’s hard. I came here as a younger woman, and I’m much older now,” she says in a quick moment of introspection before talking about the importance of an upgrade to the resort’s computer system. Mary doesn’t look back, which suits this place just fine. Mary knows the Blockade Runner has a legacy. But she also knows a legacy is something that you build on, not something you can live off of. 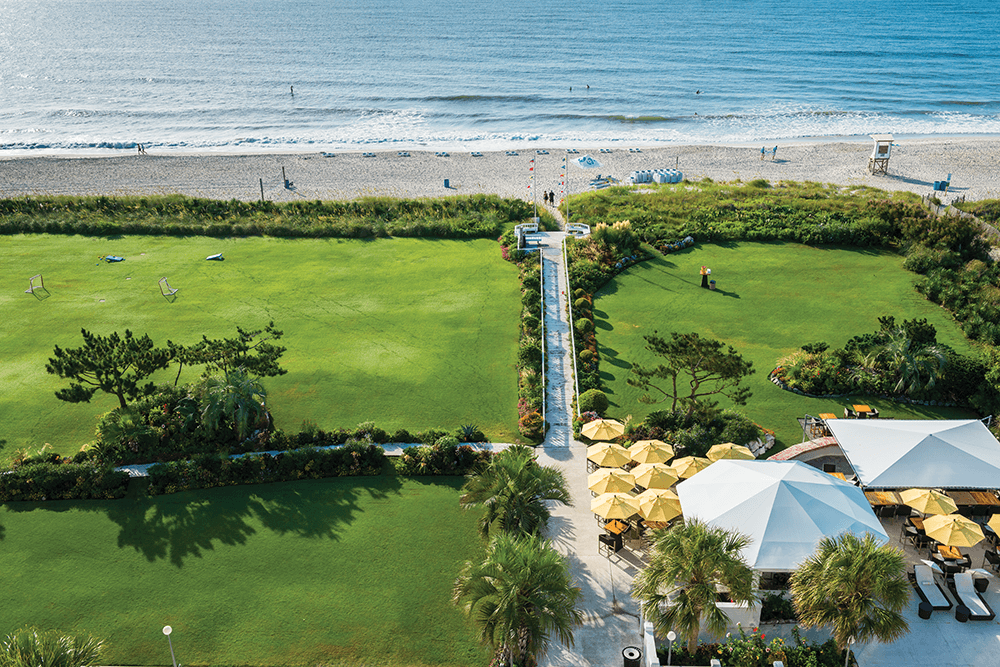 She’s proud of a lot of things. She’s proud of the fact that hers is one of the only resorts that stretches from sea to sound. She’s proud of the landscaping, which is so well cared for that delicate plants that wouldn’t survive cold weather, like the hibiscus, are dug up every winter and spend the harshest months in a greenhouse. She’s proud of the people who have worked for her and gone on to new jobs, at Glacier National Park and other places.

So here’s the hard part. For a place that’s steeped in history, for a resort with repeat guests that span across generations, for the parents who brought their kids who are now bringing their kids, things have to be familiar but not old. Nostalgia cuts both ways. “If we were going to the beach as a family, we all got in the station wagon together,” Mary says. Now, families are bringing multiple cars, and that’s turned into a problem with just 128 spaces in front. That used to be enough. She tried to build a parking deck about a decade ago, but neighbors shot it down. You’ve never needed one before, they said. So Mary hired valets instead. This year, they’re Dean and John, here from Australia on work visas.

Hence, a resort that’s a Wrightsville Beach landmark is in a constant state of change. It needs to be. The staff of more than 200 people during peak season is almost always brand new. You can’t learn tradition, says Gretchen Madden, the human resources manager, who started off in the kitchen 14 years ago and worked her way up. After a while, you just understand.

The guests understand, too. The tradition draws them back. Some come as many as eight times a year. Others come on the same weekend every year. There is Diane Antonelli of Cary. She’s stayed here 45 times since 2002. She brings chocolate pies for the staff. She takes old ID badges and pool bracelets and uses them to decorate her Christmas tree. People come and go. But here, they always seem to come back.

At noon, people are starting to file up the boardwalk for lunch. Mark Lawson expects about 300 people. At the front desk, Andi Cornelius is helping a guest who’s checking out and doesn’t remember getting a statement under his door. Tommy Van Arsdale is slinging drinks and talking to a young man who earnestly wants to know if it’s possible to swim from the resort to Masonboro Island. Probably not something you want to try, Tommy says.

All the while, Mary looks on. There is work to be done, but the guests don’t need to know about that. They just need to relax.