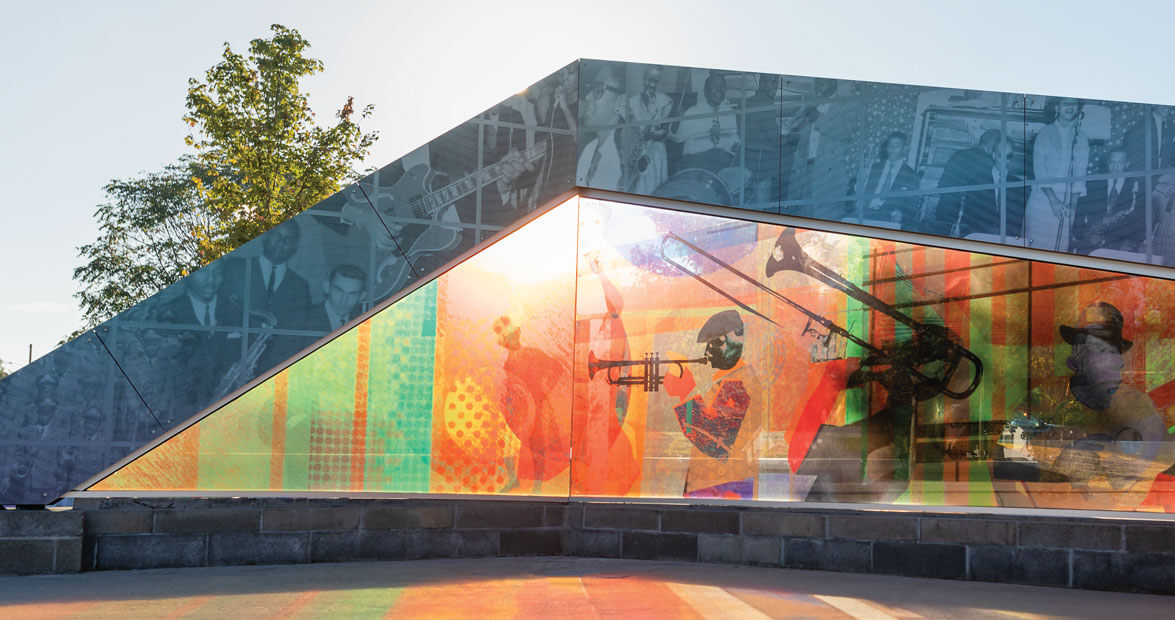 “Kinston used to jump, man,” cackles saxophonist Sonny Bannerman. “Oh man, look here, Kinston was full of clubs. Full of clubs! Yes, sir.” On Saturday nights, Queen Street hummed with live blues and big-band swing. Count Basie, Duke Ellington, Ray Charles, and Ella Fitzgerald brought crowds of thousands to tobacco warehouses, where heavy ropes stretched down the middle of the room segregating black and white patrons — though by the end of the night, many were dancing shoulder to shoulder. The next day, when the golden leaf took center stage again, the warehouse would fill with a different rhythm: the improvisational style of an auctioneer.

Music was a cash crop of its own, and Kinston was a seller’s market from the 1930s through the ’60s. The middle class that took root at mid-century put a premium on education, and that meant parents expected their children to take music lessons seriously, too. The best of these musicians — teachers and students — wrote radio hits that spread nationwide and filled the bandstands of marquee artists like James Brown. One local saxophonist, Maceo Parker, would become a legend himself.

Local bands played every night of the week downtown. Kinstonians were joined by airmen from Seymour Johnson and Marines from Camp Lejeune and Cherry Point looking to blow off steam while off base. When the licensed clubs closed down around midnight, the musicians would go to after-hours joints and keep blowing.

To 83-year-old Bannerman, those were his salad days. He and his band, the Nite Owls, got a gig as the house band at the white American Legion hall, playing three nights a week. On weekend nights, they’d wrap up at 11:30, then take their instruments across town to the black American Legion hall. “We played till about daybreak,” he says — and the white patrons, eager for more music, would follow them. “The cops, sheriffs would come around and try to make them leave. They thought it would be trouble, this, that, and the other.”

There were bigger towns with more clubs, but Kinston could match them in music. “If music had continued like it was in the ’40s, ’50s, and ’60s,” says Edwin Jones, a longtime local educator, “we would be like New Orleans.”

It’s tempting to look for something in the Neuse River water or the region’s sandy soil to explain Kinston’s past musical prowess, but the town’s immortals all point to the same thing: exceptional music teachers. Jazz education is at the heart of today’s musical revival, too. Charles Richberg, the retired band director for Kinston High School (formerly Adkins High School), leads an ensemble of local students of all ages — middle schoolers to retirees — inspired by the legacy of homegrown musicians. 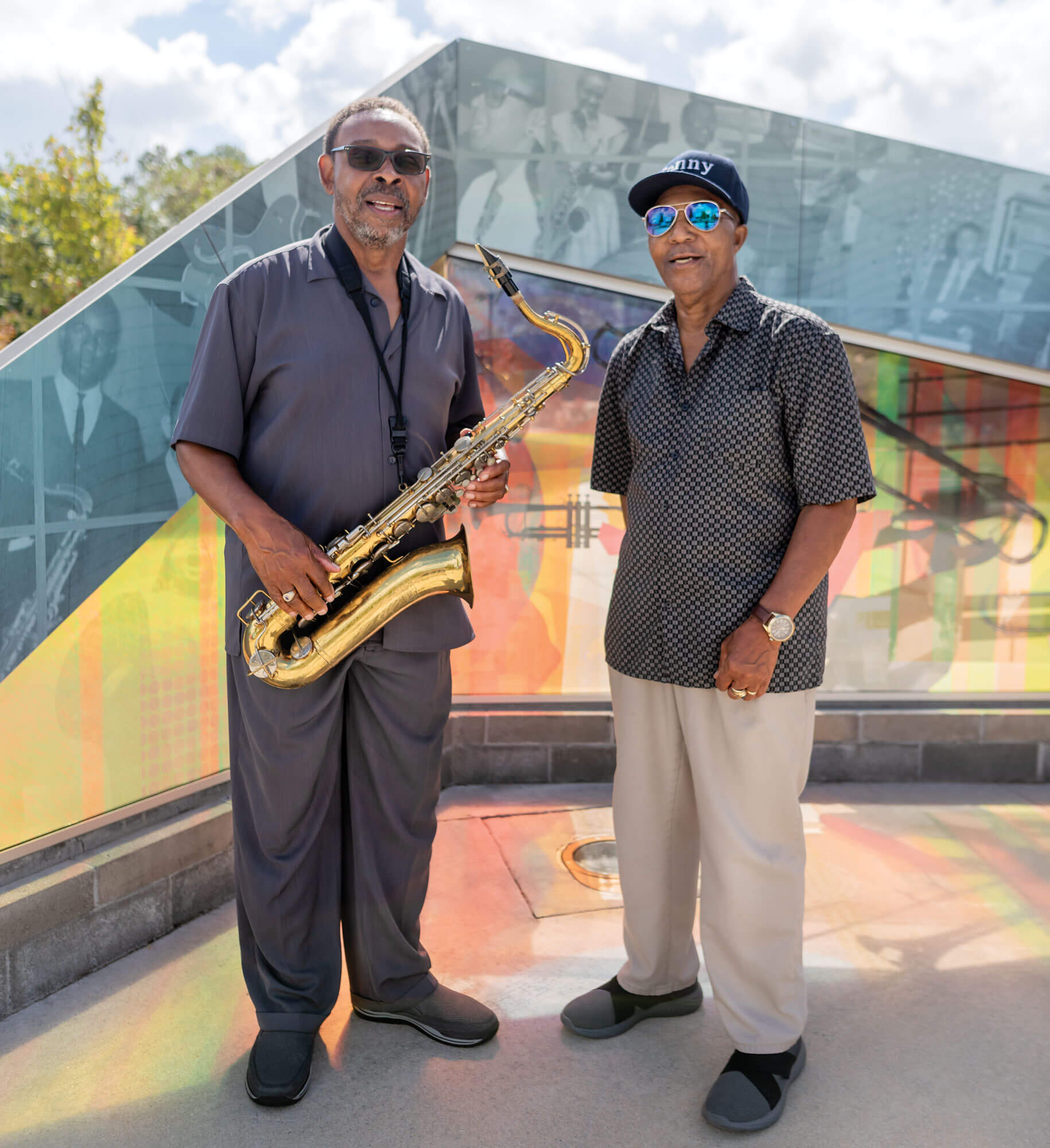 Charles Richberg (left) teaches a new generation of students the tunes that saxophonist Sonny Bannerman used to play in Kinston clubs. “That old wind’s not there anymore,” Bannerman chuckles. photograph by Eric Waters

Without a club scene to season talent, Richberg’s band plays at social functions, galas, and sometimes at the Kinston Music Park in the heart of the old nightlife district. A mosaic, created by students, honors local legends, and other displays on the grounds chronicle the town’s music history. Occupying a place of honor at the park is the teacher who, some say, inspired it all: Geneva Perry.

“Miss Perry was just an ordinary woman,” says Bannerman, who was one of her students. But she was an extraordinary alto saxophonist: “Oh man, she was beautiful, man! Yes sir, buddy, she was good.” Perry had toured with the International Sweethearts of Rhythm, a pioneering all-female big band that once blew Dizzy Gillespie off a stage. After the band folded in 1949, Perry took over Adkin High School’s band in the lively little town of Kinston.

Her standards were high — she made sure her students could both sight-read and improvise — and although she soon left town for a career teaching in New York City and Washington, D.C., she launched a tradition of rigorous music education at Adkin. Her most famous pupil was Edwin Jones’s brother Nat, a saxophonist and composer who helped transform James Brown from a mid-list R&B singer into the Godfather of Soul. Merging elements of jazz, gospel, and R&B, Jones and Brown forged a new sound: funk.

“We were playing soul, funk, and stuff before we even left Kinston,” says Dick Knight, a trumpeter whose path first crossed with Jones in 1964, when Knight was a 19-year-old high school band director in nearby Grifton. “Nat had a whole lot of stuff that he wanted to do before he got with James. You know James’s name was put on the top of it, but he was doing all that stuff before we went with James.” 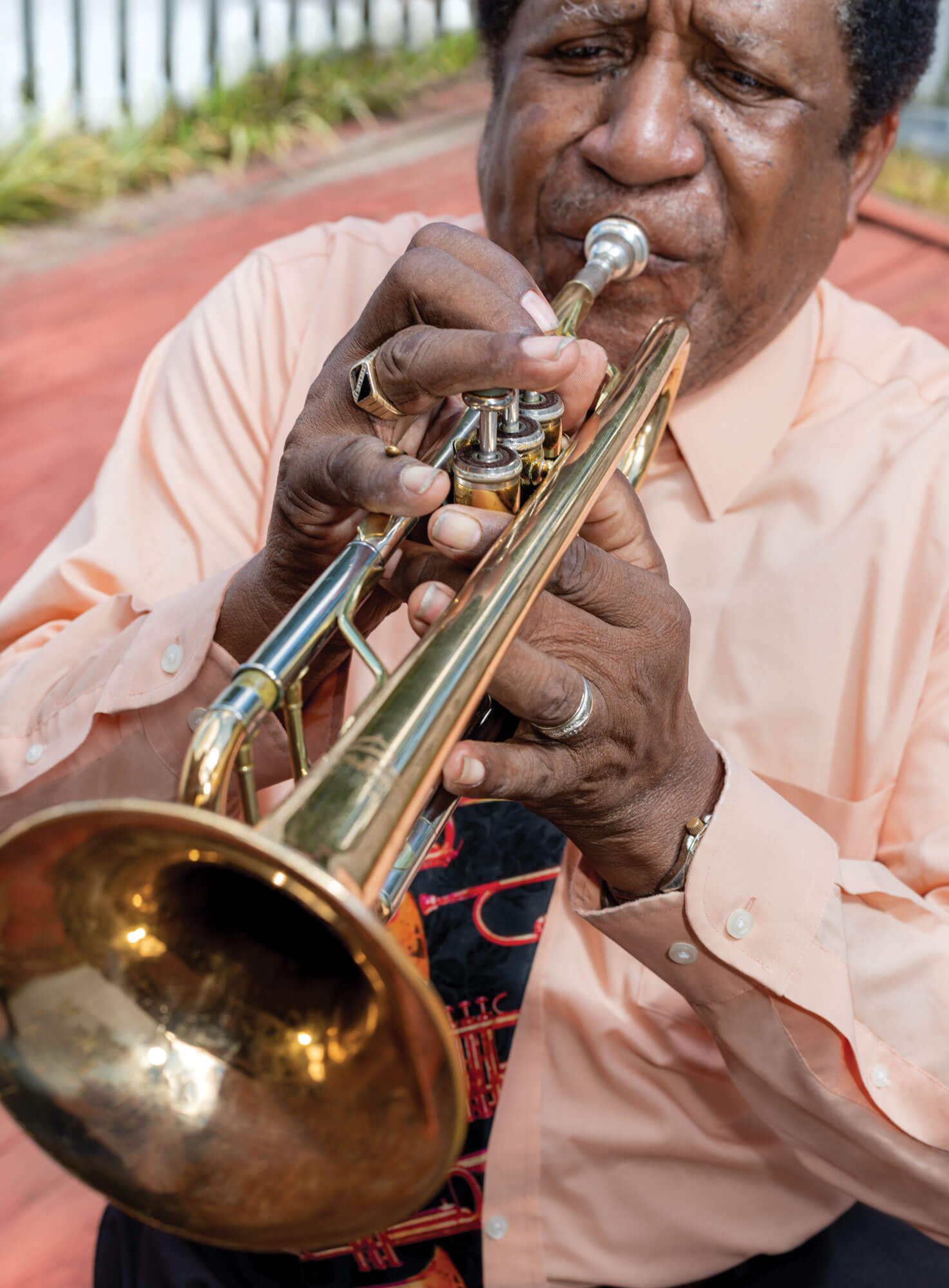 Music Park in downtown Kinston pays tribute to the city’s most influential musicians, including Dick Knight, who played first trumpet for the James Brown Band. photograph by Eric Waters

Perry’s successor at Adkin High School was James Banks, who “blew into Kinston like a cool breeze,” Maceo Parker recalled in his memoir. Maceo was just a teenager then, but the musical genius that would earn him international fame was already evident. Banks, like his star pupil, was a saxophonist, who spent summers playing professional gigs with Basie and R&B singer Lloyd Price. Banks took Maceo under his wing, but the mentorship was cut short when Banks died. His widow gave Parker his beloved Selmer horn.

Banks’s replacement was Nat Jones, back from North Carolina College (now NC Central University) with his chops strong and his head full of fresh ideas. By then, the community of musicians in Kinston was bursting with talent. Amateurs and professionals filled the bandstands, shadowed by younger combos eager for a chance to play. Like Perry, Jones wouldn’t stay long at Adkin. When James Brown called from New York to ask him to become his bandleader, Jones took the gig.

But he brought Kinston along with him.

Knight was first. He remembers the call from Jones: “He asked me if I wanted to be the first trumpet player for the James Brown Band, and I told him, ‘Yeah, man.’ He said, ‘Well, meet me at the Apollo Theater Friday evening at 4 o’clock.’” Knight begged his school principal for a release from his contract so that he could go. Jones sent him a plane ticket.

When Jones needed a copyist to prepare his increasingly precise musical charts, he enlisted his former Adkin High School student Levi Rasbury, a brass player and math whiz. The 17-year-old persuaded his wary parents to let him give up an academic scholarship to the prestigious Hampton Institute, but his math skills didn’t go to waste. When Brown’s road manager was caught taking from the till, Rasbury took over the band’s finances.

Melvin Parker, Adkin class of 1962, joined the band, too. Brown had tried to hire the drummer two years earlier, but his father, Maceo Sr., said his son had to finish college first. When Melvin finally took the job, he convinced Brown to hire his brother Maceo to play baritone sax.

It was a thrilling time to be with Brown, musically and monetarily, thanks in part to a hit the band recorded in Charlotte in 1965. Some critics consider “Papa’s Got a Brand New Bag” to be the first real funk record. Whatever it was, audiences loved it. “James started out in Atlanta making $1,750 a night,” recalled Rasbury, who died in June. “He released ‘Papa’s Got a Brand New Bag,’ and three months later, he was booking for $5,000 a night.”

Brown, however, was a mercurial boss. When Jones decided to strike out on his own, Brown blackballed him, hobbling his career. Rasbury went back to school and spent three decades running information systems — his “real dream,” he said — for Pitt County government. Maceo Parker stuck with Brown the longest, becoming an international star, but he still keeps a home in Kinston.

Knight came back to Kinston and the classroom, grateful for his time with Brown, and grateful that it was over. “It’s one of the greatest things to ever happen to me, to get that out of my system,” he says. He still plays as “The Captain,” a one-man band, and gigs with The Monitors, a regional supergroup. The band was cofounded by retired teacher Bill Myers and includes Sam Lathan, an 89-year-old drummer who left the Brown band just before the Kinston invasion. The Monitors are featured on the displays at the Kinston Music Park, and when they play the bandstand there, they can draw a crowd just like in the old days. 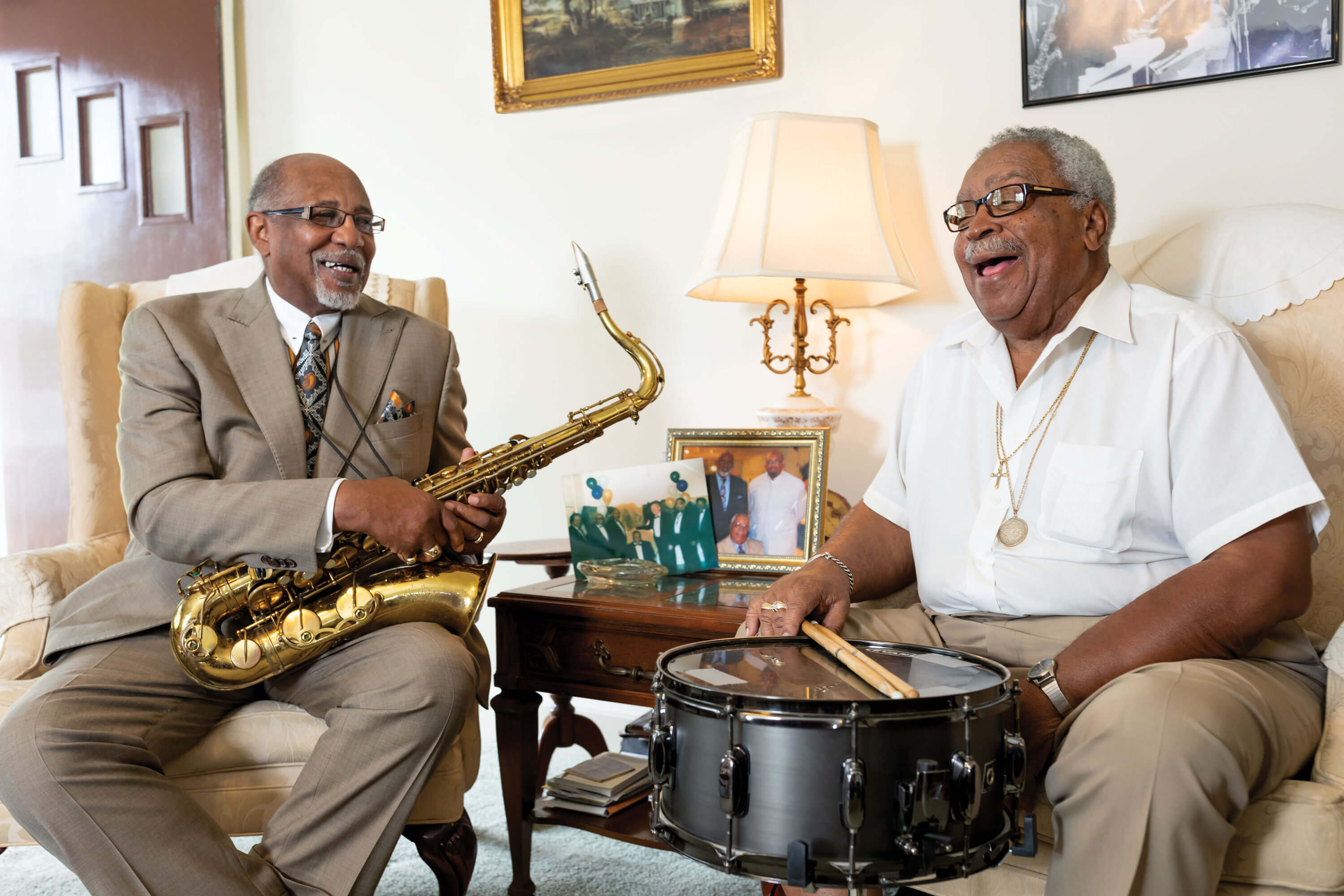 Bill Myers (left), a retired Wilson County teacher, cofounded The Monitors in 1957. Kinston drummer Sam Lathan, 89, is one of his bandmates. photograph by Eric Waters

These days, Kinston is more famous for its basketball recruits, restaurateurs, and brewers than its horn players. When disco arrived and musical tastes changed, gigs dried up. The clubs closed, and funding for music education in public schools began a steady decline, nationwide and locally. Charles Richberg, who spent decades teaching music at Kinston High, and others in the Kinston music community have taken matters into their own hands to give kids the music education that Maceo, Melvin, and Nat once had.

At the Community Council for the Arts, a stately old brick building on Queen Street, musicians of all ages are working their way through jazz standards. Most of the band are students, from sixth grade to high school, but a few adults show up, too, to keep their chops in shape. Funded by grants from Traditional Arts Programs for Students (TAPS), Richberg’s program focuses on Kinston’s native musical traditions — gospel, jazz, and funk.

Stephen and Philip Minor, brothers from Goldsboro, are taking turns at the drumset. Like most of the younger students, both are new to jazz. “We had just played after-church jam sessions, so this was our first time really playing jazz, structured things,” Stephen says. Richberg hands out new sheet music. It’s a challenging arrangement, and the band is reading the chart for the first time. After a few false starts, though, the kids are swinging through Earth, Wind & Fire’s “Let’s Groove” and “Boogie Wonderland.” It’s not the old Kinston scene, but it’s one that would make Miss Perry proud.