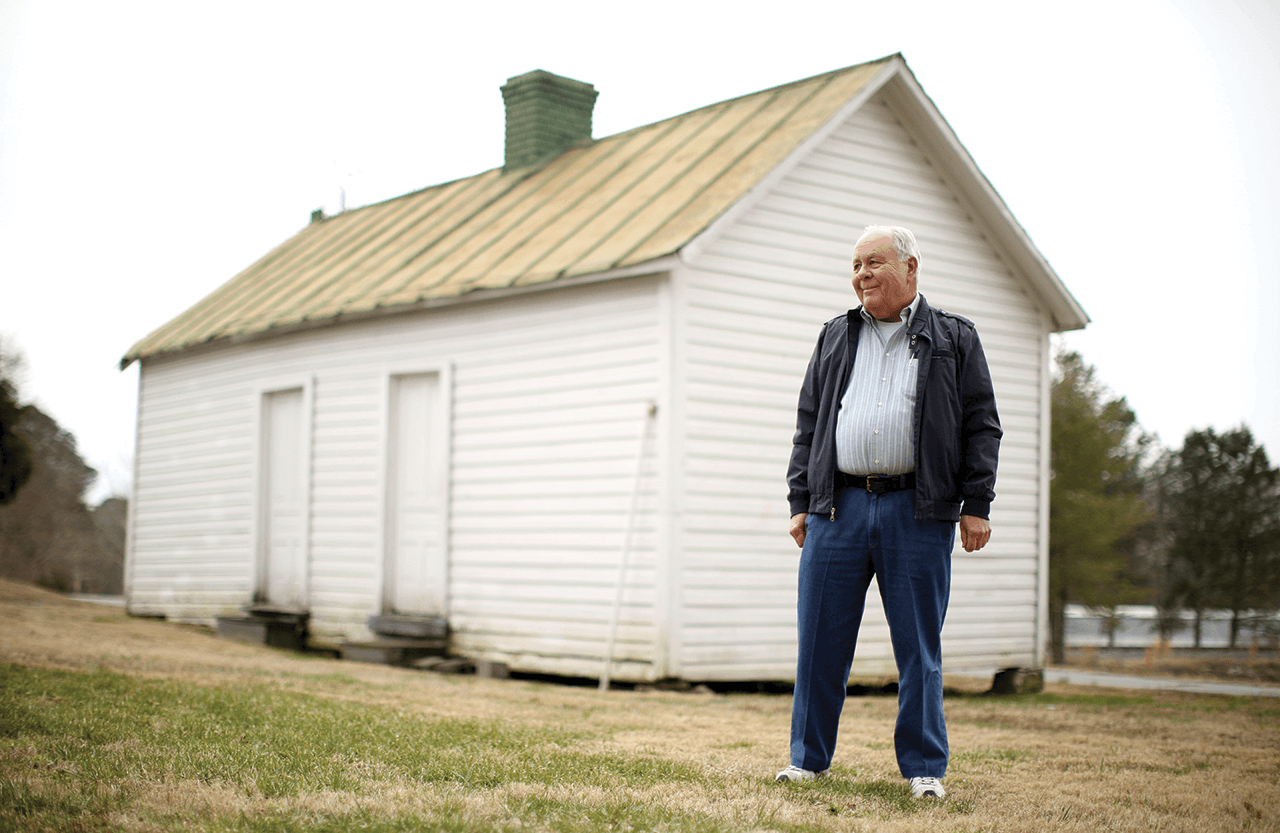 Russell Palmer opens the case. “There it is,” he says, holding up the fiddle inside. It’s old, he says. You can tell by the velvet-lined wooden case. The neck is worn. Other than that, it looks good for its age. Too good, he says.

Russell tends to wear the same expression no matter what mood he’s in. He wears a navy blue Members Only jacket over his blue shirt. He looks like a funeral director because he is one.

A couple of things about this fiddle, Russell says. It belongs to a cousin in Roxboro. It was refinished a couple of years ago. And it just happens to be the first fiddle Charlie Daniels ever played.

Russell plucks the strings idly, then shuts the case. I just want to make clear, he says, addressing the rumor that’s long circulated around his hometown, Gulf, that I never taught Charlie how to play the fiddle. I don’t even like the fiddle, he says in a gravelly voice. But he did do something else — something Charlie’s never forgotten.

Charlie and Russell go way back, to the early 1950s. Charlie grew up traveling and never stopped. Russell grew up in one place and never left. Charlie was born in Wilmington. Then his family moved, first to Gulf, then to Valdosta, Georgia, then back to Gulf. The Palmers had lived in Gulf for generations. Charlie and Russell became best friends. They’d sit around the radio on Saturday nights, listening to the Grand Ole Opry. It was only later that Charles E. Daniels became Charlie Daniels, the man who made the fiddle into a radio-friendly instrument, one forever associated with the South.

It wasn’t always so. In the early ’70s, The Charlie Daniels Band was just another Southern rock band — one that sounded a little too much like the Allman Brothers, in one producer’s opinion. Charlie had been bopping around Nashville as a session musician. He’d worked with Bob Dylan. He’d played fiddle for The Marshall Tucker Band. He’d written a song for Elvis.

And then it happened.

At the end of a show in Tuscaloosa, Alabama, Charlie pulled out a fiddle and cut loose on “Orange Blossom Special,” the de facto National Anthem of Fiddle Players. The crowd got loud. The skeptical producer realized something. Lynyrd Skynyrd didn’t have a fiddle. Marshall Tucker didn’t, either. Charlie could be different. That producer urged Charlie to write a song that became “The South’s Gonna Do It,” a tune where Charlie only stops playing the fiddle to name-drop every Southern rocker he can squeeze in. Radio stations that had never played a fiddle song started playing it.

You know what happened five years later. “The Devil Went Down to Georgia” came out in 1979. It’s never gone away. It is the fiddle song. It’s the new National Anthem of Fiddle Players.

But it all started with the guitar. One day, Russell got his hands on an old Stella. Charlie asked Russell if he could show him a few chords. That day was a turning point in both their lives.

Tell you what, Russell says, let’s give Charlie a call. He’ll talk to you. Russell pops open his flip phone and finds “CD” in his contact list. The phone rings a few times before it goes to voicemail.

Russell drives us through Gulf, pointing out where things used to be. He pulls into the driveway of an old house with peeling paint and a leaning chimney. My great-great-grandfather built this house, Russell says. Inside, the sheetrock is coming off the walls. A dresser has fallen through the floor. This is where Charlie lived as a teenager. Russell’s always kicking around this idea of turning it into a museum. “I told Charlie, I said, ‘Why don’t you buy it?’ ” Russell chuckles. “He said, ‘I think they oughta burn it.’ ”

We drive past the creosote plant where Charlie’s daddy worked. We drive out to Goldston, and Russell shows me the abandoned high school woodshop where Charlie cut off the tip of his ring finger.

Russell pulls into the parking lot in front of his dad’s old general store, now called J.R. Moore’s. He points at a window up front. Right there is where Charlie and I played for money for the first time, he says. It was a Saturday night, and two women pulled up. Play us a song, they said. “Got any money?” Russell asked. And that was Charlie Daniels’s first paid gig.

Inside, a woman behind the counter says, you know, Russell played the Opry once. Charlie left him a message in 2007, saying the Opry was going to make him a member. It was something they’d dreamed about as kids. Russell called him back.

How long since you picked up a banjo? Charlie asked.

Think you could play? Charlie asked.

I’m not sure, Russell said.

Just strum along, Charlie told him.

And that’s how Russell Palmer picked the banjo on stage at the Grand Ole Opry. 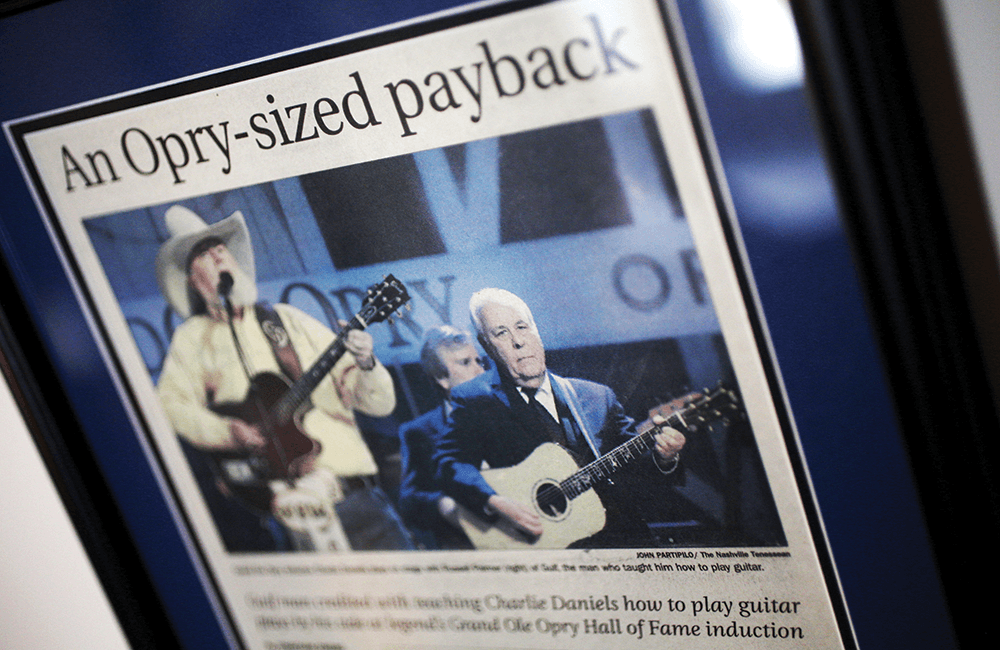 Russell’s phone buzzes, and he flips it open. “Hey, Charles E.,” he says, and passes the phone to me.

The guitar story, Charlie Daniels tells me, is absolutely true. “He taught me how to play,” Charlie says. I ask if Russell’s changed over the years. “He’s gotten a little uglier as time’s gone by,” he jokes.

The night they played the Opry, Russell was his usual low-key self, Charlie says. He wore a suit and was the best-dressed guy on stage. He wasn’t nervous. You never lose that feeling, Charlie says, of realizing a childhood dream.

I ask Charlie why Russell didn’t end up playing music for a living. The music business is a trying thing, Charlie says. It’s easy to give up. There are no guarantees. “I don’t know if he would have liked it or not,” he says.

And that was Russell’s turning point. One day, he knew he’d never make music his career. He just wasn’t good enough, he says. He played with a Clinton band called The Goldtones for a while. He met his wife, Kay, at a gig. Now, the only playing he does is with a couple guys from Pittsboro. Sometimes, they’ll get a gig down in Sanford. He doesn’t brag about playing at the Opry, except on the occasion someone tells him he can’t do something. According to Kay, Russell always has the same response. “You can’t embalm a body,” he’ll say, “and you’ve never played the Grand Ole Opry.”

A few years ago, Russell got a package from Charlie. He let it sit around for a few days before remembering to open it. Inside were copies of Charlie’s 45th and then-newest album, Songs From the Longleaf Pines. Russell opened one of the CD cases to find the entire album was dedicated to him.

And so life goes on like this for Russell and Charlie. They talk on the phone. Russell goes to see Charlie play when he’s close by. Charlie stops by when he’s heading through town. Charlie gives Russell credit for one of the most important moments in his life. And Russell doesn’t have much to say about it, unless you ask him. So, back in his driveway, I ask him.

“It was up here in this house,” Russell says, pointing toward the house next door to his, one his grandfather built. “I had the guitar,” he says. “I don’t know how it happened, but I just showed him a few chords. He says maybe I knew 2½. I guess I did. And it just went from there.”