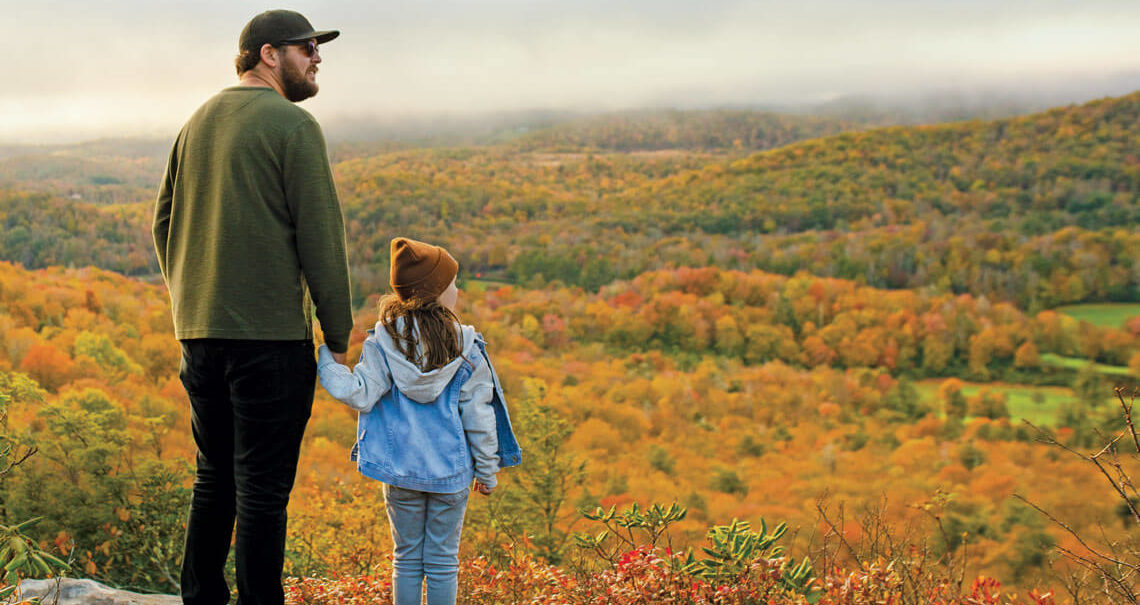 Weston Muir loves the Great Smoky Mountains. It’s a relationship that started when he was a child. In the fall, his family would load up their car and drive to the mountains from their Randolph County home — sometimes for a day, sometimes two — to see the changing leaves. Over the years, he’d return occasionally to walk the trails and camp, and to practice his other passion, videography. All the while, his affection for western North Carolina grew. “I love hiking. I love being in the woods and in the mountains,” he says. So much so that he got a tattoo of the mountains on his arm.

Weston also loves sharing his affection for nature with his wife, Hannah, and their 7-year-old daughter, Norah. They make treks to the mountains throughout the year to experience the scenery in every season — sparkling snowfalls, spring blossoms, summer sunsets, and, of course, fall leaves.

As a child and as a young adult, though, something was always missing for him: color.

For as long as he can remember, Weston, 29, has had a sight disorder that makes red and dark green look brown. It’s diagnosed as deuteranopia, but most people just call it “color blindness.”

Weston was finally able to experience the reds and oranges and purples in the fall landscape last year, when Hannah bought him a pair of EnChroma glasses, which help some color-blind people see color.

“The first time I put the glasses on in the driveway — there’s this crape myrtle,” he says. “I had never realized what color the flowers were. When I saw them with the glasses for the first time, I said, ‘Hey, there are pink flowers on this tree that I’ve never seen before.’ Which is crazy. I’ve seen thousands of crape myrtles.”

Once Weston had the glasses, the Muirs started planning where in the mountains they would go to see fall colors. He, Hannah, and Norah first went to Linville Gorge in October to hike the trails that Weston had explored previously. There, he was stopped in his tracks by a fire engine red bush. “I took the glasses off and the leaves looked brown,” he says. “Put the glasses back on and they’re bright red.”

Trips to Brevard and Boone followed, and his first views of the valleys below were painted in hues that, until then, hadn’t existed for him.

Growing up, Weston’s inability to see shades of red and green went mostly undetected. He was reading by age 4, so he “learned” his colors by reading the names on the crayons.

The first time his mother realized that her son was color-blind was when he was in elementary school. “We were supposed to be running to certain color stations in PE. I was running to the wrong colors and got in trouble for it,” he says. When his mother talked to the teacher, she realized that there was something wrong with Weston’s vision.

While being color-blind was always a nuisance, it didn’t become a major problem until he got a job installing underground power lines. To do that, he needs to steer clear of underground utilities like gas lines and fiber-optic cables, whose locations are marked on the ground with different-colored spray paint — orange, red, yellow. The problem is, “I can’t see faded orange paint on green grass; I can’t see faded red paint on green grass,” he says. “If I can’t see an orange line on the ground and I run through a fiber, it’s a big deal.”

That’s what finally sealed the decision for him to get the glasses. “They save a lot of time and save asking people to come out to a job so they can see a color on the ground that I can’t,” he says.

Outside of work, Weston was able to adjust to a world without shades of red and green. And his love of photography helped him experience a little of what he was missing out on, color-wise. He explains that he shoots long-exposure photos, and then manipulates and sharpens the images in post-production so he can see them better. “I can kind of see a little bit more once it’s been edited and colors added, and it obviously gets a lot more detailed than you could see with the naked eye,” he says.

Weston also likes to integrate his videography with his interest in astronomy — a combination that inspired him to tackle a seven-day backpacking trip in the Panthertown Valley in Nantahala National Forest to see the solar eclipse in 2017. He and some friends took cameras with special filters to film the eclipse, which would be at its peak by 2:30 p.m. But at 2, a downpour drenched the group and scuttled their plans. They moved their equipment back to the tree line, where the eclipse left them in two minutes of complete darkness. “It was pouring rain and it was miserable, but at the same time, it was the coolest thing I’ve ever experienced,” Weston says.

“It’s incredible. Now that I’ve seen what red leaves look like, I would make the drive just to see leaves that color.”

But even in total darkness, his color blindness got in the way on the trip. “We were on top of this mountain one night, and we were doing some time-lapses of the Milky Way, and one of my buddies said, ‘Look, there’s Mars over there.’ And I asked, ‘Which one is it?’ And he said, ‘Well, it’s the red one.’ But they all looked white to me.”

The new glasses need sunlight to work their magic, so the stars look the same to him. But other everyday things have changed in appearance in ways that Weston didn’t expect. He remembers taking the glasses to his childhood home across the road from where wheat was grown. “I never understood why the phrase ‘amber waves of grain’ was a thing until I put the glasses on,” he says. “Then all of a sudden, I could see this amber tint. And it’s like, Ohhh, OK. Before, it just looked brown, no real color.”

This fall, the family plans to see even more colors that Weston has missed out on until now. They’ll be going back to the places where he went as a child, when all the leaves looked the same to him, but which are now ablaze with color. “I mean,” he says, and pauses for a moment. “It’s incredible. Now that I’ve seen what red leaves look like, I would make the drive just to see leaves that color.”