It’s love at first sight. Or maybe first sniff. Or however dogs fall in love.

Theirs is an unlikely romance: Seamus is a tall, goofy, 2-year-old Bernedoodle who tends to come on too strong, especially with attractive ladies he’s meeting for the first time. Lexi is about half the size of Seamus, well-coiffed and sophisticated — a 10-year-old goldendoodle whose wild puppy days are seemingly well behind her. 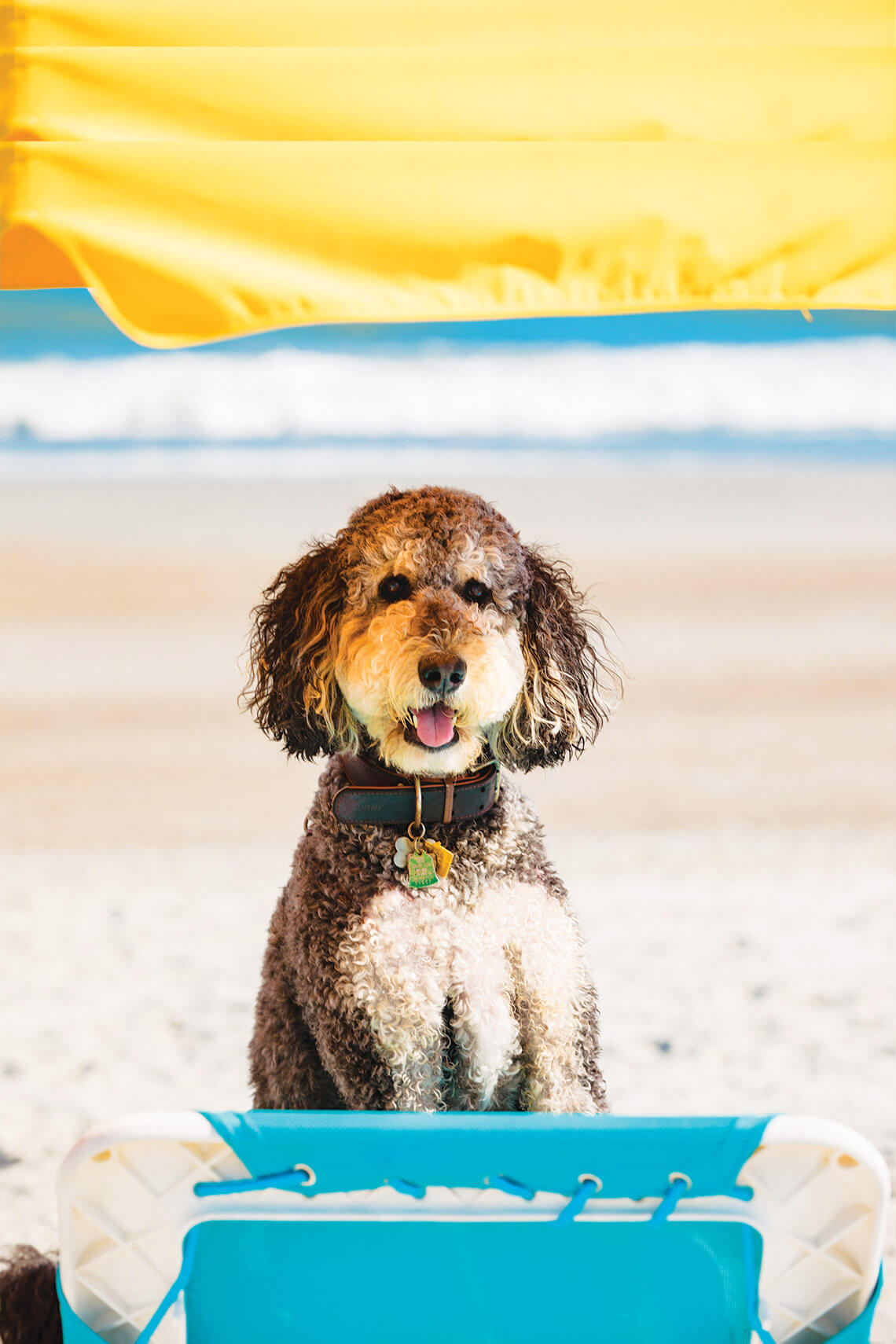 At Atlantis Lodge, four-legged guests like Seamus the Bernedoodle get their paws sandy. photograph by Baxter Miller & Ryan Stancil

But when they meet in the dog park at Atlantis Lodge in Pine Knoll Shores, their differences are swept away with the beach breeze. They share a joie de vivre that any couple would envy, an unleashed energy among the azaleas.

No matter what name you ascribe to it — puppy love, a summer fling, a beach romance — nothing could come between …

It’s easy to fall in love at, and with, Atlantis Lodge — especially if you’re a dog. Here, dogs aren’t just pets; they’re treated like members of the family — maybe even a little better. There are treats from Beaufort Pet Provisions waiting for Seamus when we reach our room. Special bedding has been laid out just for him. And it seems like everyone tells him how handsome he is. (Which he is, but still.)

And then there’s the aforementioned park that’s just for Seamus and his buddies.

Atlantis Lodge General Manager Donna Hall — the third generation of her family to manage the property — explains that the dog park was added after a guest confided that they loved all of the amenities offered for pets, but they had a problem. “Their dog wouldn’t potty on a leash,” Hall says. And letting dogs go off-leash just a short dash away from busy NC Highway 58, which runs the length of Bogue Banks, from Atlantic Beach to Emerald Isle, was not an option.

What, exactly, do you do when the fuzziest member of the family is shaggy, damp, and sandy after a day on the beach?

That preferential treatment extends beyond the resort, which is regularly voted one of the most dog-friendly places to stay on the East Coast. The beaches of Bogue Banks — Atlantic Beach, Pine Knoll Shores, and Emerald Isle — allow leashed dogs on the beach year-round, any time of day, which is the exception rather than the rule these days. True, there is something to be said for doggie “happy hour” at those other beaches, when 6 p.m. rolls around and pets stream out from condos with their owners in tow, but there’s more to be said for relaxing on the beach under an umbrella with a book in hand and a dog by your side, or half buried in the sand under your lounge chair, as Seamus prefers.

Which raises the question: What, exactly, do you do when the fuzziest member of the family is shaggy, damp, and sandy after a day on the beach? If you’re at Atlantis, the answer is simple: a full afternoon bath on the patio, courtesy of the doggie bathtub and complimentary shampoo. It’s such a popular stop after the beach that Atlantis has to replace the sturdy plastic tub every couple of years. 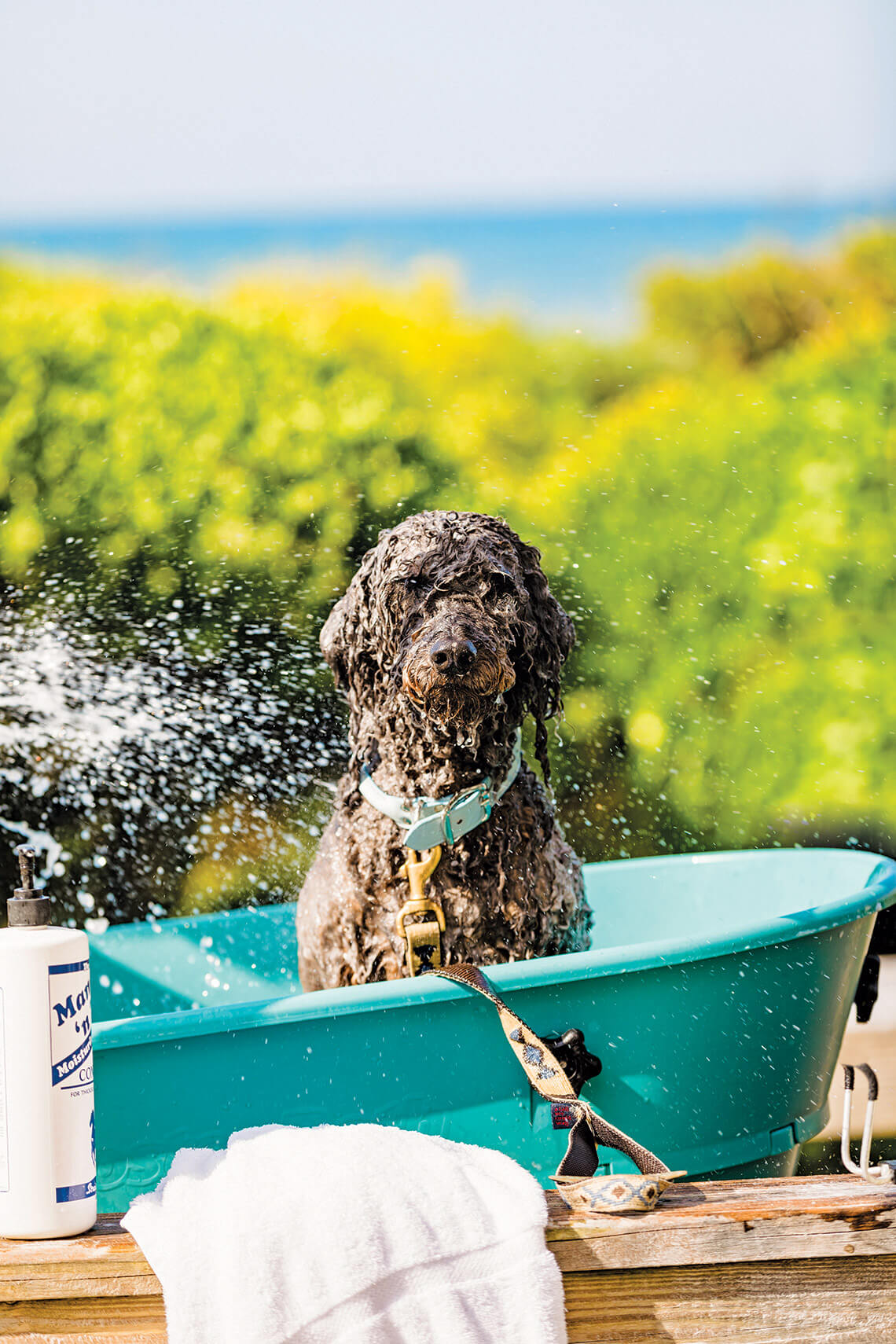 “We got the dog bath for Cody,” Hall says. An English cream golden retriever who passed away six years ago, Cody was one of many dogs that have called Atlantis home. He was known for his daily ocean swims — and daily baths. To make the cleanup job a little easier, Hall invested in the tub.

In recent years, Bingo and Bodie, a pair of Chinese crested powder puffs, have been the resident canine greeters. “Bingo is just there to hang out with and love on Dad,” Hall says of the dog that lives with her father, A.C., above the lodge’s office. Their apartment was created in 1980 by combining four units of the then 46-unit property. Bodie was the hairier of the two and had been trained as a therapy dog to help elementary students with their reading. He unexpectedly passed away earlier this year and will surely be remembered by guests for years to come.

Atlantis Lodge has been pet-friendly since it opened in 1963. Hall explains that when her grandmother Ruth “Mabee” (pronounced “Ma B”) Bray opened the doors to the then 12-room Atlantis Lodge, the first customer just happened to have a furry member of the family.

“Her idea was to have a small motel with apartments so that people could stay for the month if they wanted to,” Hall says. “One of her first customers had a dog or a cat, and she said, ‘Sure.’”

“I just wanted a place where everyone could come and bring the whole family.”

In the nearly 60 years since then, Atlantis has expanded from 12 rooms to 46 (and back to 42) and from one floor to three, and management has shifted from Hall’s grandmother to her parents, Dot and A.C., to Hall herself. At 94, A.C., who not only was responsible for construction of the lodge, but also helped develop the town of Pine Knoll Shores, still has a prominent place at Atlantis — and arguably the nicest backyard around, which he gladly shares with guests, and their pets, year-round.

The patio and lawn behind the lodge really do make it feel like you’re sharing someone’s home. There’s a grill and picnic tables for guests’ cookouts. There’s a huge pot for seafood boils. And there are deck chairs that practically beg to be napped in.

And there are dogs. Every breed, size, and hometown imaginable. “I adore animals of all kinds,” Hall says. “I just wanted a place where everyone could come and bring the whole family.” 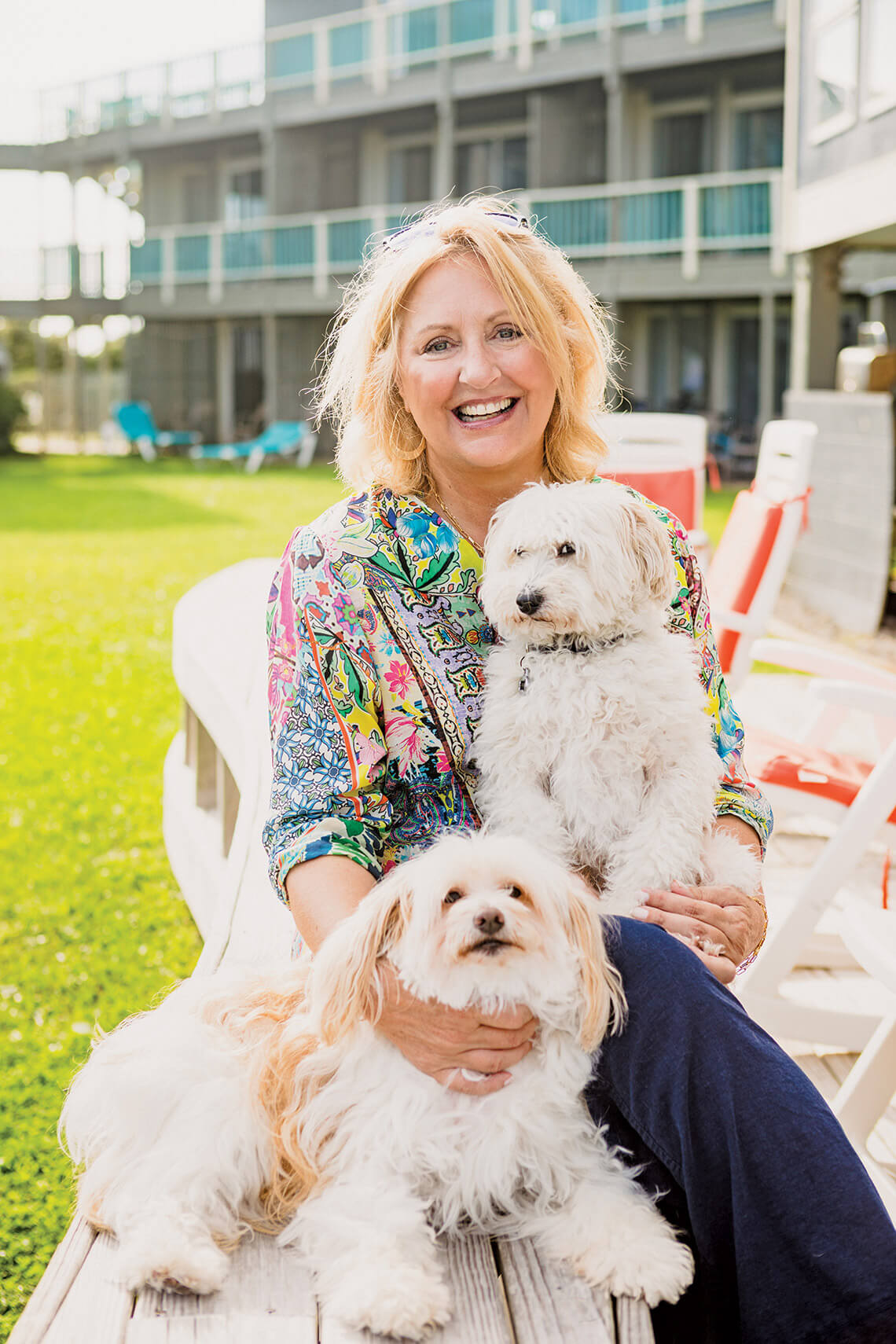 Donna Hall poses with Bodie and Bingo. Bodie passed away on March 4, but Bingo will still be greeting guests at Atlantis Lodge this summer. photograph by Baxter Miller & Ryan Stancil

Granted, not everywhere that vacationers want to visit is as welcoming to dogs as Atlantis. There are local restaurants with outdoor dining where dogs can tag along, but for families who don’t want to share their meal with their pet, Atlantis has a list of dog sitters. And families who want to explore the area more can arrange a half- or full-day stay at Beach Paws Pet Resort in Newport.

Of course, with its ocean views from practically every room, impeccable landscaping, heated saltwater pool, and retro vibe, Atlantis Lodge is a treat to stay at with or without a pet. Hall says that of the 42 rooms, 36 are pet-friendly suites; of those, about half are booked by pet owners — or at least pet owners who bring their animal(s).

“It’s so sweet talking to people who don’t have their pet with them,” Hall says. “I’ll ask them if they’re OK with all the pets, and they love it. They didn’t want to bring theirs, but it’s so fun watching the other dogs play.” Even Atlantis guests who don’t have dogs at all still have an appreciation for Seamus and his like. “I’ve met a few people who don’t like dogs,” Hall says. “Of course, they don’t come here, which is good.”

Seamus must sense that vacation is coming to an end on our last morning at Atlantis. The novelty of the dog park has worn off, and now he’s just looking for his friends — Desi and Charlie and Max.

He’s still at the end of his leash as we walk down the beach to say goodbye to the surf and the sand and the gulls he’s been chasing all week, but this time, he’s not dragging me unceremoniously down the strand. 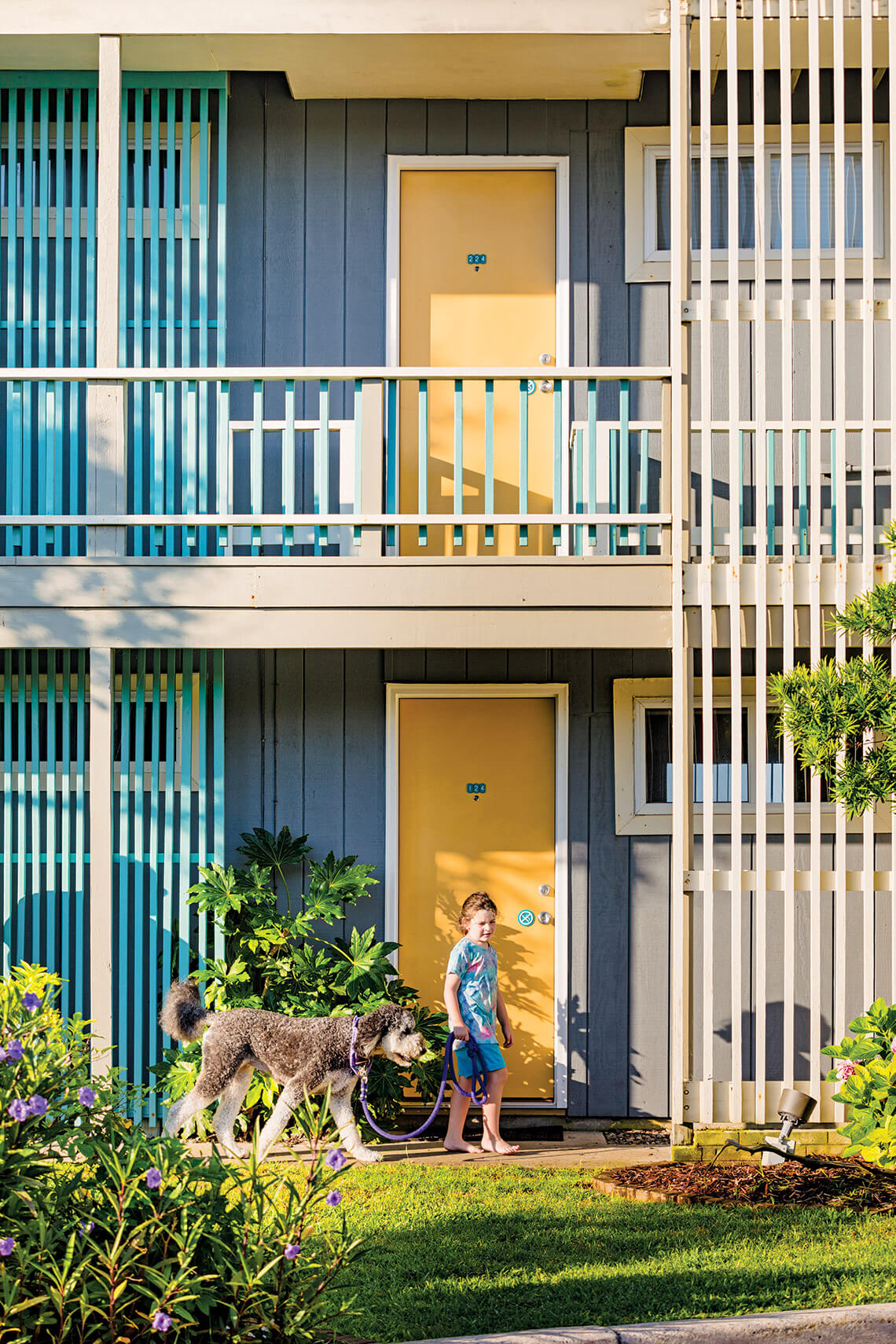 Oona Dulaney, the writer’s daughter, takes Seamus for a walk around the Atlantis Lodge property — both on the lookout for friends they haven’t met yet. photograph by Baxter Miller & Ryan Stancil

And, unlike the past several days, when people tell him how handsome he is, he doesn’t respond by jumping up to give them an unexpected kiss. Instead, his reaction seems more subdued, as if to say, “Yes, thank you, I know.”

Now, Seamus is taking a last victory lap of his little patch of beach, saying farewell to the terriers and retrievers and the lone wolfhound he befriended or tormented. And he’s looking — or maybe sniffing — for Lexi. Maybe it’s over-personification, but it’s comforting to think that Seamus will remember her, and remember this place, and that somehow what he feels is true love.

Get the Most Coast

Can’t get enough of the beach? Hang 10! We talked to three surfing experts about how to catch a wave, beginner-friendly surf spots, and their most memorable rides. Visit ourstate.com/osknowsbest.