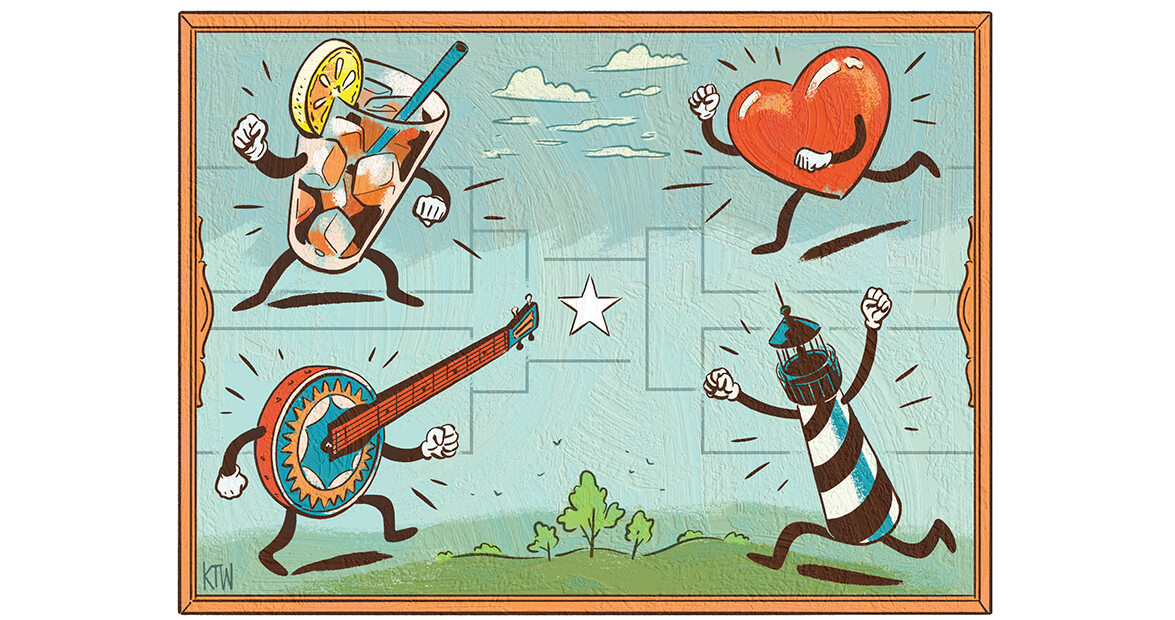 Vote in The Most North Carolina Bracket

In the spirit of March Madness, we created a tournament to find the champion food, phrase, or icon that represents us best. By registering, we’ll keep track of your votes through each round to see if you voted for the winner. The champions will be announced on March 24.

1. Basketballin’ vs. Racin’
Hard to say which organization known by its initials wins here: ACC or NASCAR. This is the state where Michael Jordan, Dean Smith, and Coach K got famous, but North Carolina also claims the Earnhardts and the Pettys. The winner depends on whether you prefer passing in the free-throw lane or the fast lane.

2. Sweet Tea vs. Sweet Potatoes
Sweet tea is a top seed in our bracket and should have no problem defeating sweet potatoes, which, despite being our state vegetable, keep getting called yams.

3. “Bless your heart” vs. “Catawampus”
When these two get together, throw out the dictionary. Sure, plenty of people think they know what “bless your heart” means, but they only truly understand it when it’s used in the right situation. Bless their hearts. Meanwhile, catawampus means “askew,” Yankee.

4. “Y’all” vs. “-Vuhl/-Buruh”
Y’all could win it all. It’s ubiquitous. Really, you have to go out of your way to say “you all.” Then again, “-vuhl” and “-buruh” allow you to spot out-of-towners. Point at Greenville or Asheboro on a map. If a person says “Green-ville” or “Ashe-burrow,” the jig is up.

5. Writin’ vs. Pickin’
What’s mightier: the pen or the banjo? Writin’s got some depth with Maya Angelou, Thomas Wolfe, and all of Hillsborough on the roster, but North Carolina also lays claim to musicians Earl Scruggs, The Avett Brothers, and the Carolina Chocolate Drops. You can’t go home again — unless you get a gig at Merlefest.

6. Mayberry vs. The Lost Colony
The Andy Griffith influence is strong in this matchup. Mayberry’s the clear favorite: Hearing the word instantly conjures up an image of small-town North Carolina. But insiders know a young Griffith once starred in The Lost Colony outdoor drama, which still runs in Manteo.

7. Barbecue vs. Fried Chicken
Barbecue gets the headlines, but fried chicken gets a lot of love. Pork’s fans are divided by allegiance to style — eastern or Lexington — but everyone can agree that North Carolina’s fried chicken will make you forget about the Colonel.

8. Red Clay vs. Kudzu
A classic soil/vine matchup. Red clay cakes on shoe soles and stains socks, but it also makes amazing pottery and bricks. Its challenger: kudzu, a vine that’s not only speedy, but also more annoying than a trash-talking power forward. Hey, not all of North Carolina’s icons are beloved.