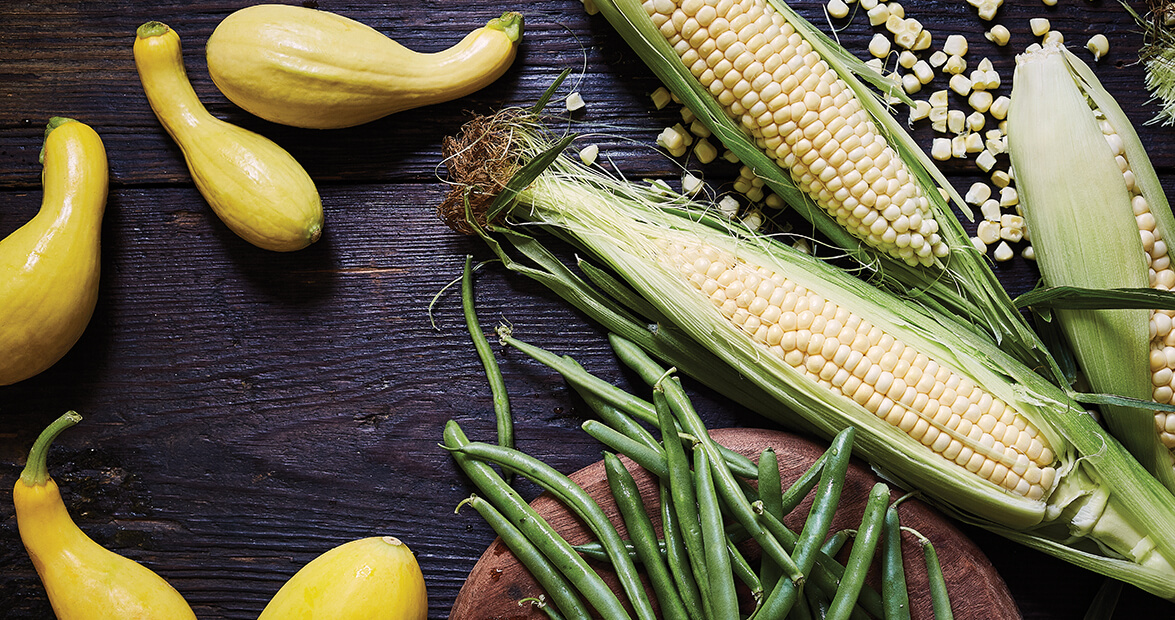 Native Americans were our first farmers, including the Cherokee, who adopted and adapted an interdependent farming system known colloquially as the Three Sisters. The main characters are corn, beans, and squash or pumpkin, called selu, tuya, and iya in the Cherokee language. Each of them provided foodstuffs, of course, but their role wasn’t singular. Farmers hilled up the three together in mounds, not rows. The cornstalks formed the center pole, giving the beans purchase to climb sunward. Nodules on the weblike bean roots returned vital nitrogen to the soil. Broad squash leaves shaded the ground, slowing evaporation, and the plant itself produced an allelopathic substance that reduced weeds when it washed off in the rain. Meanwhile, the prickly hairs on the ropey squash vines deterred marauding animals.

In this type of companion planting, each element contributes to a whole that is greater than the sum of the parts. Together, it’s a nearly perfect ecosystem, especially when the sun and rain keep their end of the bargain. But what makes this ingenious system a favorite method among farmers and chefs to this day is that it’s delicious.

Forager, seed-saver, gardener: Clark Barlowe, the celebrated executive chef and owner of the aptly named Heirloom restaurant in Charlotte, cooks exclusively with North Carolina ingredients to create dishes he calls “locally sourced and globally inspired.” When not in the kitchen, he might be found out in the woods, foraging for mushrooms or windfall persimmons. 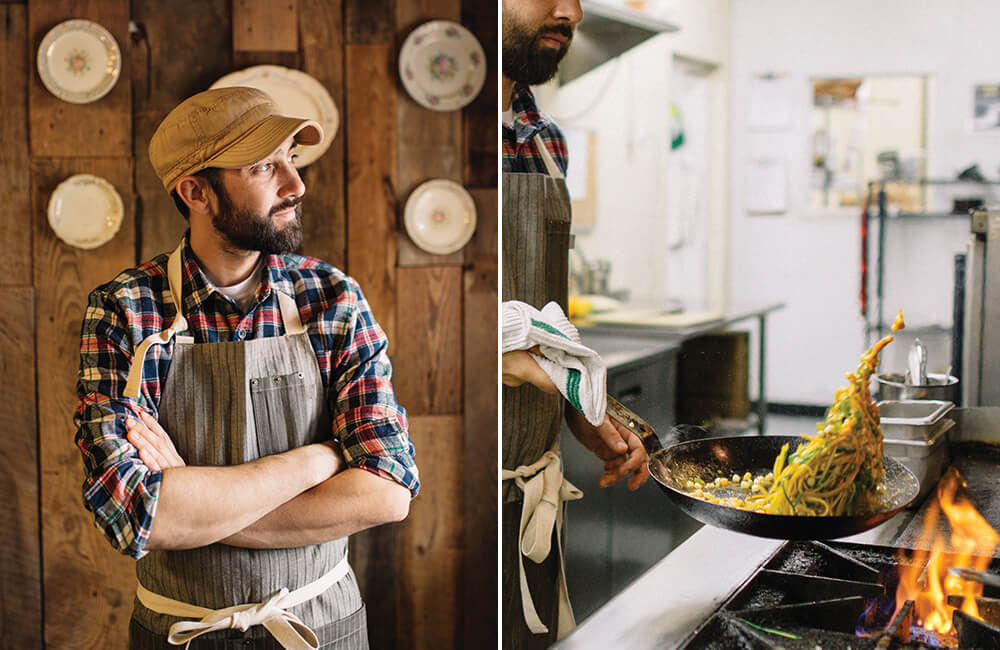 Charlotte chef Clark Barlowe learned the value of farming, foraging, and seasonal cooking from his grandparents in Lenoir. photograph by Revival Creatives

To remind himself of what matters most in cooking, he displays on a shelf in his restaurant a wooden biscuit bowl and rolling pin once used by his great-grandmother, whose pumpkin seeds, he says, “still produce a gorgeous harvest at my parents’ farm in Lenoir.” Clark’s family was farm-to-table back when it was just called dinnertime, but his appreciation for the complexities involved in cooking what you grow goes deeper than his own personal experience.

“What interests me most as a chef is that the history of North Carolina cuisine goes all the way back to Cherokee cooking techniques,” he says. “But there are very few written recipes or records, so we must draw inferences from how they farmed and used the land.”

While companion growing meant planting several different crops in a group, it sure didn’t mean harvesting or cooking them all together. “It wasn’t about companion cooking,” Clark says. In fact, the Three Sisters’ staggered harvest — tender beans picked first, then corn, and finally, the hardiest squash — meant that the Cherokee farmer had to consider which varieties of corn, squash, and beans might be best eaten fresh, and which would benefit from being dried or stored for later. And generations of farmers passed along that knowledge until it became common practice.

Instead of super-sweet fresh corn to slather in butter and gnaw off the cob, farmers needed resilient ears suitable for drying and grinding, the likes of Hickory King Dent or Bloody Butcher. Their rangy, sturdy stalks reached as high as 12 feet, producing precious few ears, but the unequivocal corn flavor was worth it.

Beans were raised not as a green vegetable, but as a source of plant protein that could be eaten fresh or dried for storage. North Carolina was once home to dozens of varieties of nutrient-packed beans, including many that seed-savers now categorize as heirlooms. Even now, many home gardeners — especially in the mountains — extol the flavor found only in old-timey string beans such as Half-Runners and Greasy Cut-Shorts, which are left on the vines until their pods are nearly bursting with plump beans. One look at those robust pods certainly suggests that they could out-duel a flimsy stringless haricot six ways to Sunday.

These practical farmers also preferred large and meaty squashes with hard shells that made them good keepers through the winter. The empress was a variety of Cucurbita maxima known as a Candy Roaster. Cherokee tribes in the southern Appalachians valued this squash for its long shelf life — it didn’t reach full flavor until it had cured for a few weeks after harvest — and its ability to withstand a hard frost. Some were so large and sturdy — from 10 to 250 pounds — that they could chill in a root cellar for weeks, even after a hatchet-wielding cook lopped off a few hunks. Candy Roasters are still grown in a few spots in North Carolina by those who treasure their exceptional flavor and natural sweetness.

Growing the Three Sisters is a way to repeat history, to give us a taste of our past, which is why some people are determined to keep the practice from disappearing. David Cozzo, a scholar of Cherokee enthnobotany, uses the Three Sisters to demonstrate the benefits of a good garden ecosystem. “The thing about a seed bank is that it’s a living thing,” he says. “We’re not only handing out seeds, we’re handing down the legacy of those foods.”

There was no single superior variety of corn or bean or squash that suited everyone in every part of this state, so farmers cultivated suitable seeds hailing from thousands of tiny Edens. As a result, the produce grown by Cherokee farmers — actually, by most North Carolina farmers until only a few decades ago — was considerably different from what is raised from commercial seeds sold nationwide today.

Chefs like Clark treat produce grown from heirloom seeds and raised by the old methods like culinary gold. “When I find a good crop of Oaxacan green corn, I can’t wait to get in the kitchen and start cooking,” he says. “The flavor is remarkable, and what can I say? Green is my favorite color.” 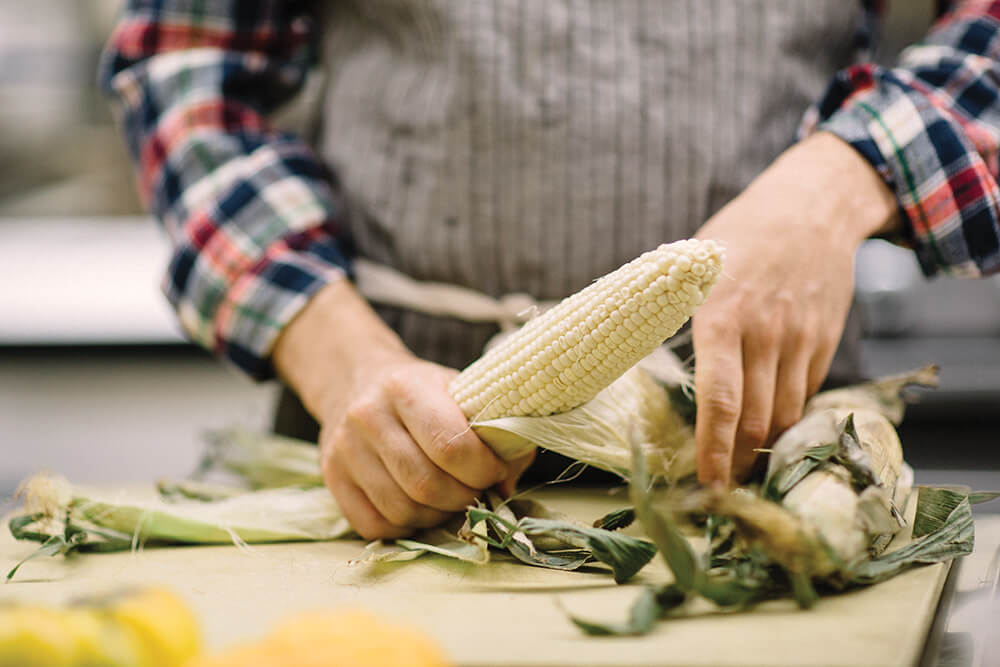 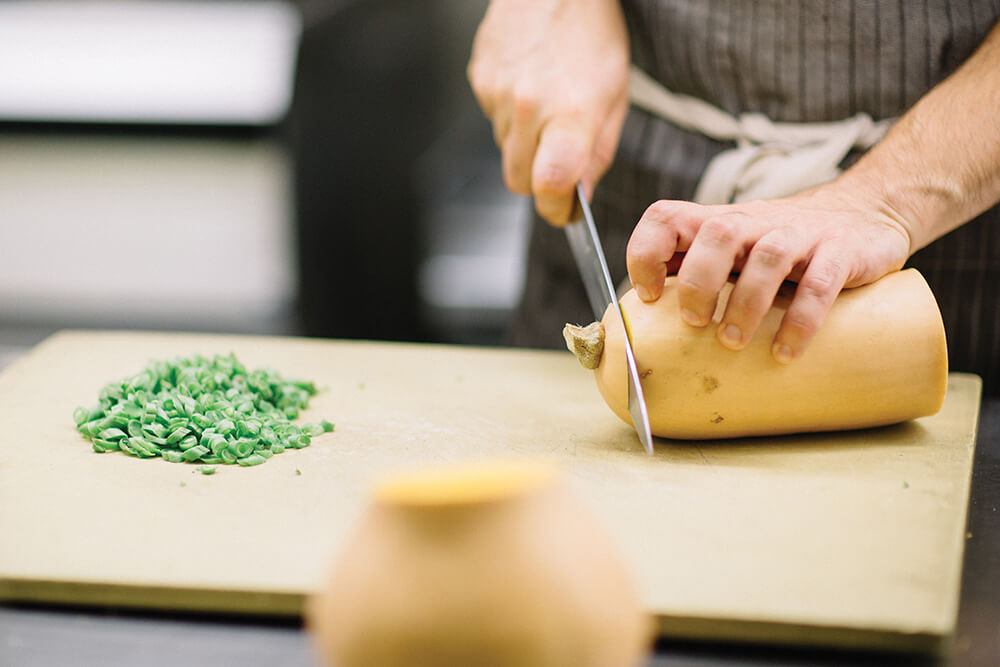 Going back to the old varietals and methods also has given chefs new ingredients to play with. The Three Sisters system included an equally important — but less lauded — little sister: wild greens. The upstart plants poking up and running amok among the mainline ladies are what we contemporary gardeners might obsessively battle because we think they’re weeds. Cherokee gardeners would suggest we’re pulling for the wrong side: They weeded only twice each year, knowing that many so-called weeds are edible — a bonus harvest.

“I know I’ve struck a chord if the older Cherokee gardeners nod their heads when I talk about which weeds need to go and which need to stay because we’re going to eat them,” says David, who teaches a class on hidden harvests in and around the town of Cherokee. Sochan, also known as green-headed or cutleaf coneflower, a cousin to sunflowers, is an excellent side dish in the right, knowing hands, he adds. Birds and bees were drawn to the flowers, but Native Americans ate the profusion of tender leaves as a fresh green vegetable.

“The provenance of an ingredient tells us something about its flavor.”

Chef Mike Moore, an eastern North Carolinian who now lives in Asheville, and his wife, Darlene, formed The Blind Pig Supper Club to host culinary events that celebrate and support local farms and a community of chefs. They called one of their dinners Tsalagi, the English word for the Cherokee language. A friend who forages on the Cherokee reservation brought him 25 pounds of sochan, which Mike describes as “almost like a Cherokee collard green.” Mike and his fellow chefs cooked them in a big pot of tasty potlikker, noticing that their flavor was more subtle and complex than collards. (Some foragers and cooks have described the taste of sochan as a mash-up of arugula, mint, spinach, and carrot tops.) Blind Pig donated the proceeds to the Cherokee Preservation Foundation.

Evocative flavors harvested straight from — and only from — our land, our place in this world, is the oldest and, as it turns out, newest North Carolina culinary story. Our long history of camaraderie between growers and cooks has enabled our food scene to strut across the national stage. “In this state, the provenance of an ingredient tells us something about its flavor,” Mike says. “It marks its value, in a way.” Which is why so many menus credit farmers like artists in an exhibit. And sometimes the chef is the farmer, and vice versa, closing the loop even more intimately.

No matter who’s cooking, in the best kitchens across the state — home and professional alike — the guiding principle seems to be: find the best available produce on any given day, and then take pains not to wreck it.

The Three Sisters (or Four, depending on who’s counting) continue to reward us for circling back around to homegrown flavors that feed our renowned farm-to-fork movement. It’s in our nature to do so; always has been. Even Ralph Lane, the leader of Sir Walter Raleigh’s first Roanoke colony, noticed that our little patch of this earth seemed particularly blessed, so much so that he declared it the “goodliest soyle under the cope of heaven.”

A mountains-to-sea dish that’s sweet and spicy, too. 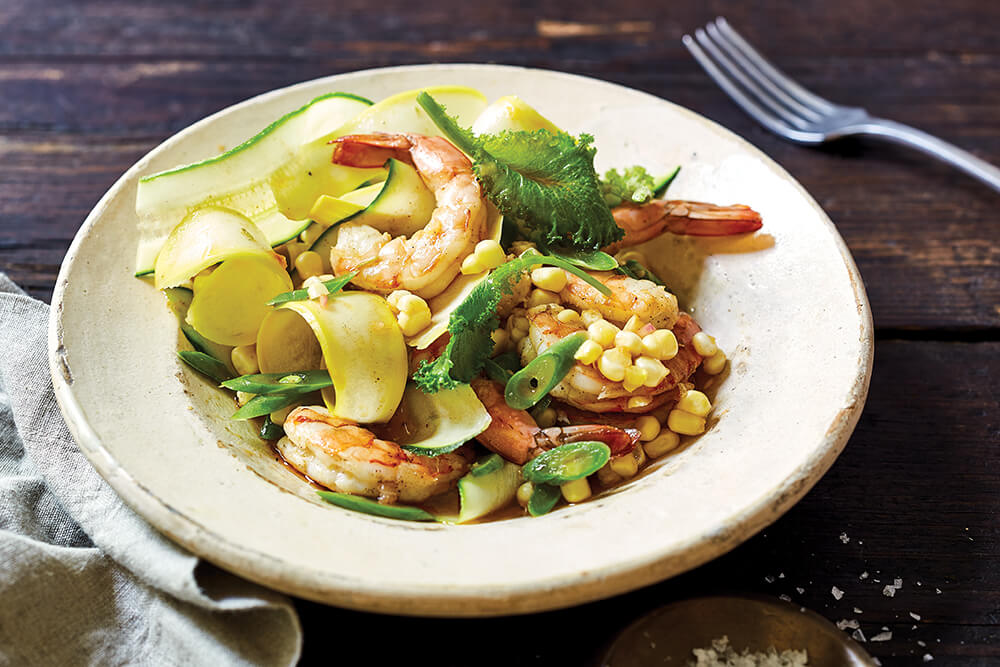 For the vinaigrette: Whisk together the vinegar, shallot, tomato paste, thyme, and curry powder in a small bowl, and set aside for 15 minutes.

Whisk in the mustard. Whisking continuously, add the oil in a slow, steady stream. Season with red pepper, salt, and black pepper.

For the vegetables: Use a vegetable peeler or mandoline to shave the zucchini and summer squash lengthwise into thin noodles or ribbons. Place in a large bowl.

Cut the beans diagonally into very thin pieces. Add to the bowl.

Add the corn kernels and toss to combine. Cover with a damp towel and set aside until needed.

For the shrimp: Stir together the oil, pepper flakes, and paprika in a saucepan. Bring to a simmer over medium heat. Simmer for 3 minutes. Strain into a bowl and discard the solids. Return the strained oil to the saucepan.

Bring the oil to a bare simmer. Add the shrimp and poach until they are barely opaque in the center and semi-firm to the touch, about 1 to 2 minute. Drain on paper towels.

To assemble: Bring the tomato vinaigrette to a simmer in a small saucepan. Drizzle over the zucchini mixture while tossing gently with tongs. Divide the warm, dressed zucchini mixture among serving plates.

Top with shrimp and mustard greens. Drizzle with a little more chili oil, if desired. Serve at once.