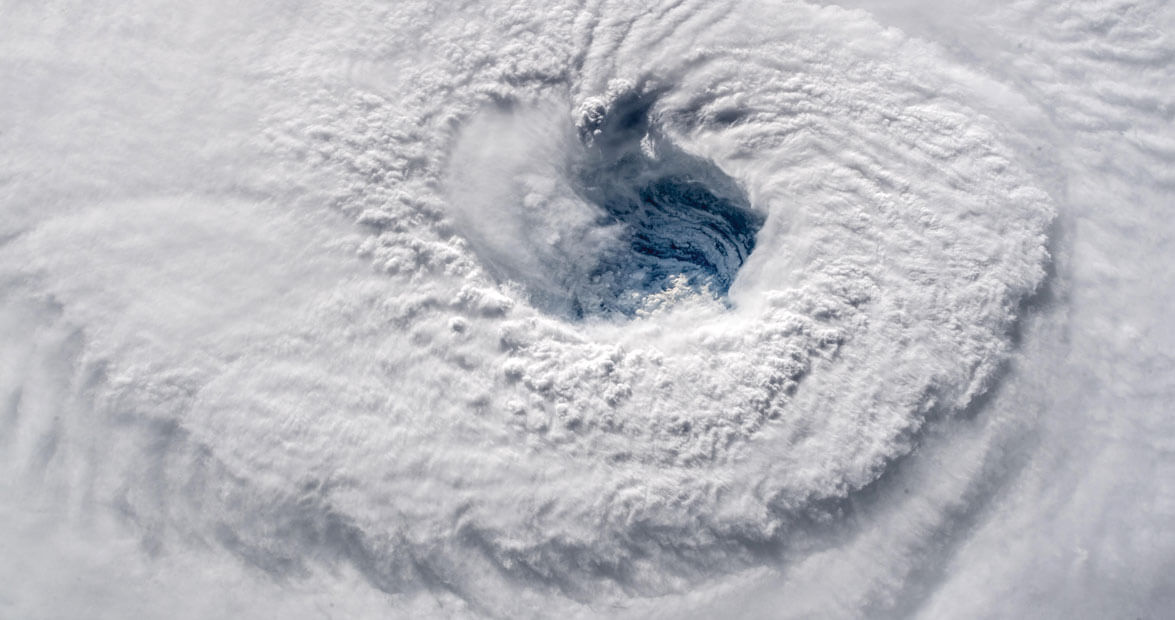 Surviving the Storm of a Lifetime … Again is featured in our December 2018 issue. This is part one of a four-part feature: The Landfall, The Aftermath, The Outlook.

It’s been 22 years since Hurricane Fran slammed into our world. The storm surge lifted the dock to which my 32-foot sailboat was moored, and when the water came down, the boat was impaled on a piling, stabbed through the heart, a total loss. Friends told me the video image made CNN and that the picture was featured in several boating magazines. When the salvage crew raised the boat, I had them cut off the piling for me, and I planted it in my front yard with a whale weathervane on top so it could not kill any more boats.

Since then, we’ve endured Bonnie, Floyd, Matthew, and many lesser storms. This time, as Hurricane Florence approaches, we — my wife, Jill; me; and our Aussie, Daisy Duke — decide to evacuate to our cabin in Virginia. Then we start hearing from friends about 13-hour ordeals just to reach Charlotte — normally a four-hour drive — and predictions of catastrophic flooding in the very place where we plan to seek refuge. And gas stations all over town and up the highway are already out of fuel. We don’t want to get caught out on the highway — stuck in traffic, out of gas — or make it to the cabin only to get stranded there without power.

We decide that it’s just as dangerous to go as it is to stay.

In the house where Jill and I have lived since our wedding 11 years ago, my downstairs study becomes our safe room. It was designed as a master bedroom, so it has its own en suite bath and a door that opens onto the back deck, which overlooks the brackish tidal current of North Whiskey Creek — a wide, shallow finger reaching off the Intracoastal Waterway that people say was once used by bootleggers. We’re about 25 feet above the creek, with a steep downslope from our deck to the water, so we’re not too worried about flooding.

On the other hand, the neighborhood is built along a single road, and that road passes a narrow, curving neck between the duck pond and the fall-off to the main branch of the creek. If that overfloods, we’ll be trapped.

We screw plywood over the glass door to the study, leaving the narrow sidelight as our window to the world. Jill brings a mattress downstairs and snugs it against the bookshelves on the garage-side wall. We place our safe — filled with all of our important documents — under my big oaken desk, next to the dog bed.

I’ve already secured the canoes on their rack, and the gas grill is tied down and has a full tank of propane so that we can cook after Hurricane Florence for as long as the power stays out. We go to the ATM and take out a lot of cash — when the power and Internet go down, so do the credit card machines. We try to be smart: We fill our two vehicles — the small Honda Fit and the big Honda Pilot — with gas before the lines get crazy and people start acting crazier, driving on the wrong side of the road and rear-ending each other in their cell phone-distracted rush.

We’ve got 40 gallons of bottled water and three bathtubs full of tap water for washing, cooking, and flushing the toilets. We have cans of tuna, soup, and stew — a whole array of non-perishable foods. Twenty-five pounds of dry kibble and 10 cans of wet dog food.

We’ve stocked up on wine and beer and scotch.

We have gathered first-aid supplies and medicines into a canvas tote bag that’s hanging handy on the hall closet door. In the front room sits a yellow duffel bag full of two sets of foul-weather gear. My high rubber Red Ball boots and Jill’s white “Sneads Ferry Sneakers” — the boots favored by commercial fishermen — stand next to the bag.

On the cedar chest in that same room, we have Gorilla tape and several unopened tarps to wrap around any window that gets broken by debris.

I’ve done what I can in the music room — cased up the guitars, put plastic bags over the amps, stowed the vintage Sho-Bud pedal steel and the Martin Dreadnought in the closet under the stairs, which should be the safest place for them. The music room has a bank of windows facing the creek, and overhanging it is a grand old water oak — we’ve cared for it, had it trimmed when it got top-heavy, but still. It’s there, standing bowed over the metal roof of the music room in a world of gravity and wind.

We watch Hurricane Florence on CNN. We watch ourselves from the satellite as the whirling orange-and-yellow vortex that our governor is calling a Monster Storm bears down on us. The National Weather Service calls Hurricane Florence “The Storm of a Lifetime.”

I thought I’d already had one of those.

Jill is calm and efficient in her preparations. She vows not to worry about things over which we have no control. But I lived through Fran and the horrible aftermath — months of wreckage and discomfort and hard physical labor with chainsaws and shovels and rakes. Endless negotiations over insurance for my lost boat, my damaged house, the SUV flattened just weeks earlier by a falling tree in Hurricane Bertha. I was exhausted, unable to shower, lacking hot food, sweltering in the 90-degree heat without AC, and yet required to report for duty at my university shortly after the storm and go on as usual.

So, I admit it — I’m scared. This hurricane is a monster — a massive, unpredictable thing that will roll over us without pause or compunction. Hurricane Florence is nature unleashed. It’s a freak storm that’s only possible because of how unseasonably warm the water remains — low 80s. Don’t tell me climate change is a hoax. Hurricane Florence is big and slow and clumsy, lumbering this way and that, baffling the predictors, and TV meteorologists tell us that the hurricane will thrash us for as long as 24 hours before it moves on.

An impending hurricane begins a natural, often tragic drama — I’ll remember to tell this to my writing students:

Act I is The Approach — the inexorable, yet oddly unpredictable, prelude to conflict. It creates a predicament for the characters — us: Should we stay or go? Action carries consequences. Deciding not to act is itself an act. And it carries the anxiety of suspense: Will Hurricane Florence hit us? When? How hard?

Act II is The Landfall: the hours of being under Hurricane Florence, suffering the hurricane’s fury, hunkered down and waiting it out, reacting to whatever crisis befalls us.

Act III — sometimes the longest act, going on for days, weeks, months, even years — is The Aftermath. What is ruined, what is not, what remains. Who’s hurt and how they recover. Hard work, cooperation and stress, heat and exhaustion.

I help my next-door neighbor Pete move his new generator from his garage to a sheltered, well-ventilated storage space under his house. Some neighbors have gone; some have stayed put. We trade information on who is doing which, so we know whose door we can knock on if it comes to that.

The boat waits down at the mouth of the creek, snubbed to doubled-up, brand-new bow and stern lines. I finish the job with my old friends John and Jessiebeth — with whom I sheltered during the worst of Fran. We drank their liquor shelf dry as falling trees shook the house and the wind screamed outside in the pitch darkness of a night without stars.

Spending a couple hours with them, each of us helping the others arrange lines and fenders, I remember our camaraderie, how people pulled together after Hurricane Fran. My stomach — which has been queasy with a cold, dripping clench for days — settles a bit. I tell John how reassuring it is to share this time of anxious preparation with him. John, a retired naval aviator, says wryly, “Yes, but I hope this doesn’t become a yearly thing.”

They’ve gone back to their home in Duck, at the northern end of the Outer Banks.

That was two days ago. Now Jill and I walk down to our neighborhood dock, where the rising tide, pushed by Hurricane Florence, is already overwashing the planks. The hurricane’s just starting to blow, fitful bursts of wind that rattle the live oaks and sway the tall masts of the longleaf pines. The sky is breathing in and out, the dirty clouds rushing overhead in a fast swirl. We walk back home to do whatever remains undone and watch ourselves on the CNN satellite.

Then, if all goes well, it’ll just be a terrifying night of candlelight and Scrabble, and in the morning we’ll emerge a bit dazed from our bunker into the rainy dawn to see what is left of our world.