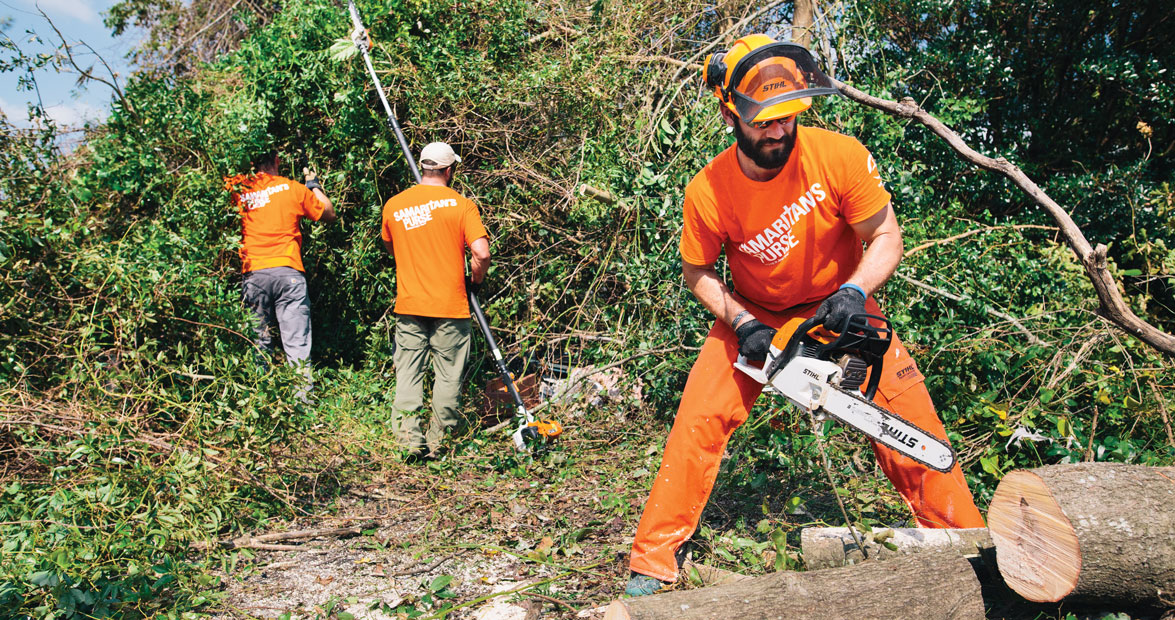 Surviving the Storm of a Lifetime … Again is featured in our December 2018 issue. This is part three of a four-part feature: The Approach, The Landfall, The Outlook.

We are OK. The dog is OK. We can see the mast of the boat down the creek — still moored snugly to the dock. The house is beat up by debris, but not damaged. The roof of the music room is dented. The power is off, and will stay off for almost six days. From time to time, we get cell phone reception, texts, even the odd phone call. Then service goes away. There’s no pattern to it.

We learn that the water is no longer safe to drink, not even for cooking. We learn from a neighbor that the water utility is running out of diesel fuel for its equipment and generators, and if that happens, the water will go off.

We have four large trees down across our street and no access for emergency vehicles or Duke Energy trucks. Pete hauls out his chainsaw and leads a crew of seven of us to cut up the trees and pile the limbs in heaps on the side of the road to make a clear passage.

My friend Chris has texted me to see if we’re OK, and I tell him that we are trapped and in need of a chainsaw. As we clear the tree at the entrance to the neighborhood, he appears with his teenage son Parker and his STIHL Wood Boss chainsaw. In only six or seven hours, we clear all four trees.

In a gesture of extreme generosity, Pete lets us hook a line into his generator so we can run the fridge in our garage and a fan, and recharge cell phones and a laptop computer. This is miraculous, the gift of cold drinks, food we can grill, and a fan to move the close, humid air of the living room — our new bedroom. But because of the shortage of gas, he has to shut it down every night around 9.

We learn on the radio that Wilmington is cut off — all roads out are overwashed, even I-40. When my friend Bob calls from New York, I say, “Greetings from the new island nation of Wilmington.” He gets the joke. He was evacuated from Wrightsville Beach during Fran and wrote a prescient book called The Coming Storm, which linked more and more unpredictable superstorms to climate change — 17 years ago.

My university, UNC Wilmington, is closed until further notice — classes will not resume until October 8, unprecedented in my 30 years of teaching there. We go out in search of an open grocery store — it’s clear that three or four days of emergency rations isn’t going to be enough. We have to plan on weeks.

So we tour the wreckage of blocked-off and flooded streets, snaking through detours, and find an open grocery store. The beer aisle is almost stripped, but I snag a case of what’s left. We load a cart with water and food and more dog food, enjoy hot coffee at the air-conditioned Starbucks café at the front of the store. Everyone is polite and helpful, sharing the inconvenience. Other shoppers trade tips about where to find gas or water or batteries.

FEMA centers start popping up in parking lots — a reminder that, for too many, Hurricane Florence is more than a matter of inconvenience. We know people whose homes were smashed flat by falling trees, whole neighborhoods flooded, people who have lost nearly everything. Three thousand homes flooded, we hear.

A new term makes the rounds: swift-water rescue. Teams are pulling people off of cars, roofs, and trees. We hear of a young mother and her infant who were crushed in their home by a fallen tree.

And so it goes. The rain comes back in more lashing waves. The Cape Fear and Black and Lumber and all the other rivers are expected to flood to historic levels. Upriver, more than 5,000 hogs drown, their carcasses joining those of more than a million chickens and turkeys, along with the contents of overflooded lagoons thick with hog waste and mounds of chicken waste. All of this makes its way into the river.

Inevitably, the Cape Fear breaches the dam surrounding Sutton Lake, the retention pond for cooling water for the local power plant. The plant floods and is taken offline. There is some “unusual event” downriver at the nuclear power plant in Southport, but we are told that it is under control. We hope so.

Then, the riverkeeper — who has assessed Sutton Lake by motorboat — reports that the massive coal ash pit that is supposed to be removed out of the watershed has also been breached. Into the Cape Fear River spills tons and tons of toxic coal ash. This storm just keeps on giving — seeking out all of the weaknesses in our planning and policy and behavior, and turning them against us.

After five days with no power, we are told by a service crew that it will be restored in a few hours — then another violent storm erupts, and lightning blows up the transformer. We hear the explosion and see the flare of sparks across the creek — and that buys us another 24 hours of waiting. That night, we watch green-and-blue lightning flash across the sky in a weird, ongoing, sinister aurora.

And so it goes. We sleep the afternoons away, lie awake sweating in the dark of night, wake up and shower under cold water, visit with neighbors, make meals and eat them. We text and make phone calls from the Home Depot parking lot a few miles away, where we can pick up a reliable signal. The only virtue of this life is that it’s been honed to a single purpose: getting through this. I’m too distracted to write, too exhausted to read. My fingers are too sore from the outdoor work to chord a guitar. We concentrate on getting through the next thing, and the next, and then the one after that.

Jill has a pile of papers to grade, class preparations to get on with. But all of that stays on hold. For now, we just take it one day at a time — here in the island nation of Wilmington.