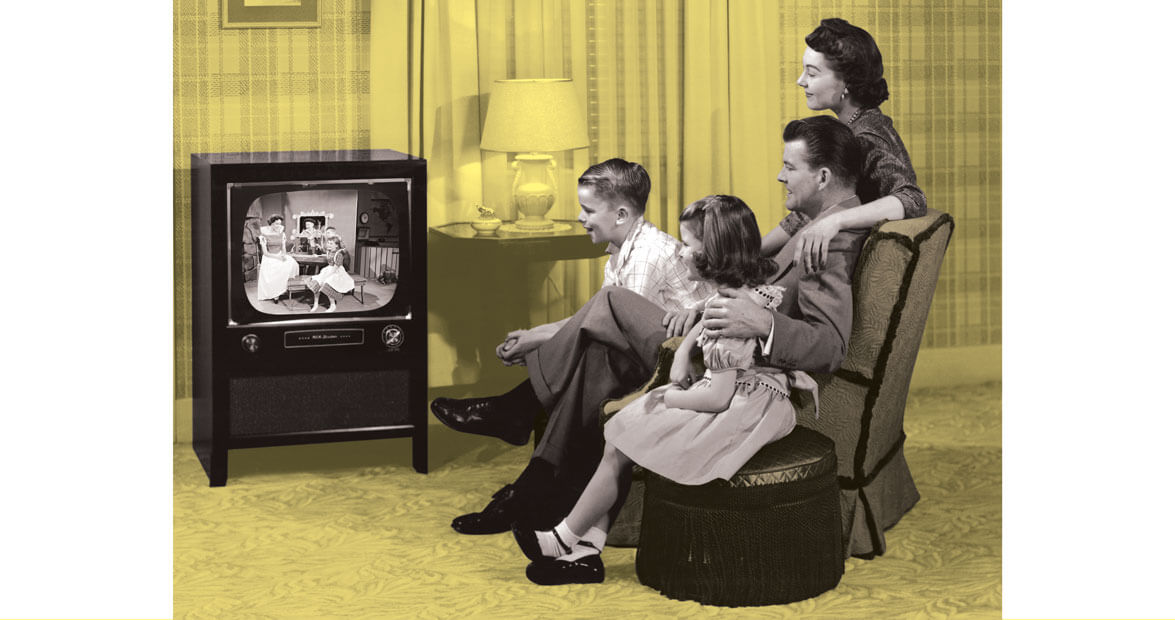 Public Television in North Carolina begins as a quiet, static signal: Invisible, very high frequency (VHF) waves, emanating from a broadcast tower nearly 800 feet tall on Terrell’s Mountain in Chatham County, create a test pattern on television sets in a radius of 100 miles. The test pattern appears on Channel 4 from noon until 6:30 p.m. for several days in January 1955, and residents of cities as far away as Statesville call or send postcards to the Consolidated University of North Carolina office to let Robert F. Schenkkan, director of the newly created WUNC-TV, know that they are receiving the signal clearly. Indeed, the signal has been picked up as far west as Kansas and Missouri.

The university seeks to extend its educational mission across the entire state through the establishment of campuses and centers. Now, it takes that mission to the airwaves, connecting households in the Piedmont region to UNC through educational, cultural, and college sports programming. No longer will citizens have to be physically present on campus to benefit from the well of knowledge and expertise gathered there.

In the same way that the rural electrification program of the 1930s, ’40s, and early ’50s lit up the hinterland and made possible a radio net that spread news and music throughout the state, the educational TV station will create a net of learning, reaching into far-flung households, bringing at least some important assets of the university to any citizen who wants to be included.

The inaugural broadcast of January 8, 1955, opens with a film, followed by a live half-hour song-and-dance program. The evening lineup features a basketball doubleheader between Wake Forest University and UNC. WUNC-TV broadcasts only the black-and-white video — “broadvision” — not audio. Thus, the first sports show is a silent moving picture. Carolina wins 95-78 — a good omen for this new enterprise, which is only the 10th educational TV station in the country. As the 10th, it qualifies for the last $10,000 educational grant from the Emerson Radio & Phonograph Corporation.

It’s fitting that the first big evening show should be a sports broadcast — William C. Friday, assistant to UNC President Gordon Gray and one of the main architects of WUNC-TV, served as sports editor of NC State’s campus newspaper, The Technician. He also spent many autumn afternoons as an undergraduate working as a “spotter” for the announcer at football games.

Equally fitting is the first night’s sign-off program: Edward R. Murrow’s This I Believe. Murrow introduced the program in 1951 with these words: “This I Believe. By that name, we present the personal philosophies of thoughtful men and women in all walks of life. In this brief space, a banker or a butcher, a painter or a social worker, people of all kinds who need have nothing more in common than integrity, a real honesty, will write about the rules they live by, the things they have found to be the basic values in their lives.” Friday is a man of deep convictions, integrity, and honesty — a believer in the power of higher education to make North Carolina a better place. 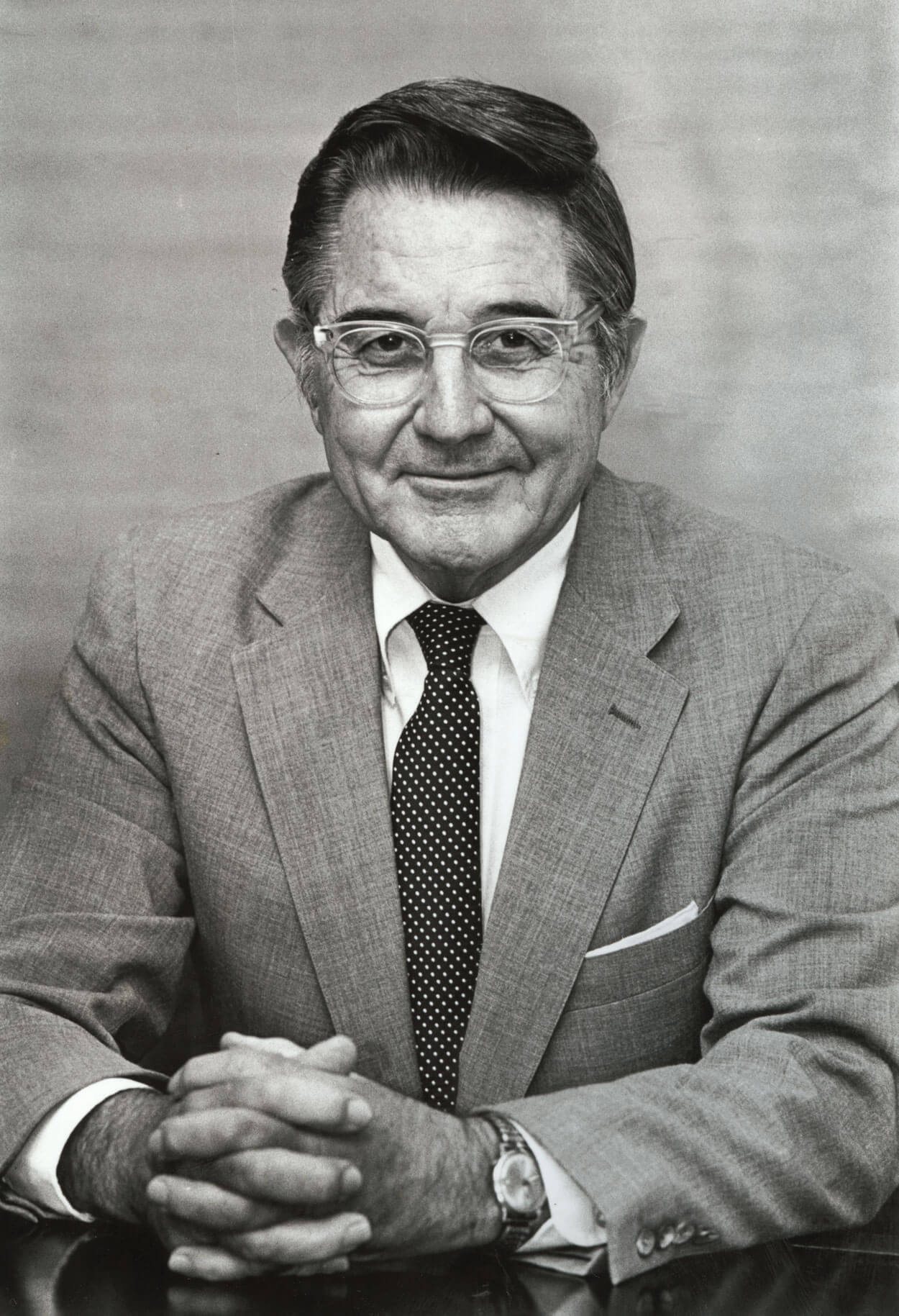 As one of the founding fathers of WUNC-TV, William C. Friday (above) envisioned the station as an educational opportunity for viewers across the state. A bus-turned-studio, donated by the Town of Chapel Hill, helped set the plan in motion. photograph by portrait ua023_024-001-bx0006-010-016, People collection (UA023.024), the special collections research center, north carolina state university libraries

Programming for Channel 4 originates from three studios, each affiliated with a campus of the Consolidated University: a renovated laundry in Greensboro, a converted dining hall in Chapel Hill, and a studio in Raleigh. A retrofitted Carolina Trailways bus serves as a mobile studio: The vision for WUNC-TV is to send its cameras and crew where the stories are.

The whole venture is born in 1952, when the Federal Communications Commission (FCC) makes available eight channels in the state for use by noncommercial stations. President Gray calls a meeting of directors and deans from the three campuses — Chapel Hill, Raleigh, and Greensboro — and gets the green light from the Board of Trustees the following year.

But there’s a hitch: Joseph Bryan, president of Jefferson Standard Broadcasting, which operates WBTV Channel 3 Charlotte, also wants Channel 4 in order to penetrate the Triangle market. When he finds out that UNC wants the channel, however, he generously withdraws his bid — and supplies the university with all the completed paperwork relevant to the application, a gift worth thousands of dollars that would have been spent on legal and other fees.

Kyser first led a dance band in 1926 while still a student and a member of the cheerleading squad. So ardent was his school spirit that he wrote the fight song “Tar Heels on Hand.” He took the band on tour, playing theaters, dances, and clubs, and landed a weekly musical comedy quiz program on NBC radio: Kay Kyser’s Kollege of Musical Knowledge. When war broke out, Kyser vowed not to play commercial gigs until it was over, choosing instead to entertain the troops and make morale-boosting movies. He performs overseas on Pacific islands and stars in movies like Carolina Blues, and, later, a television show. 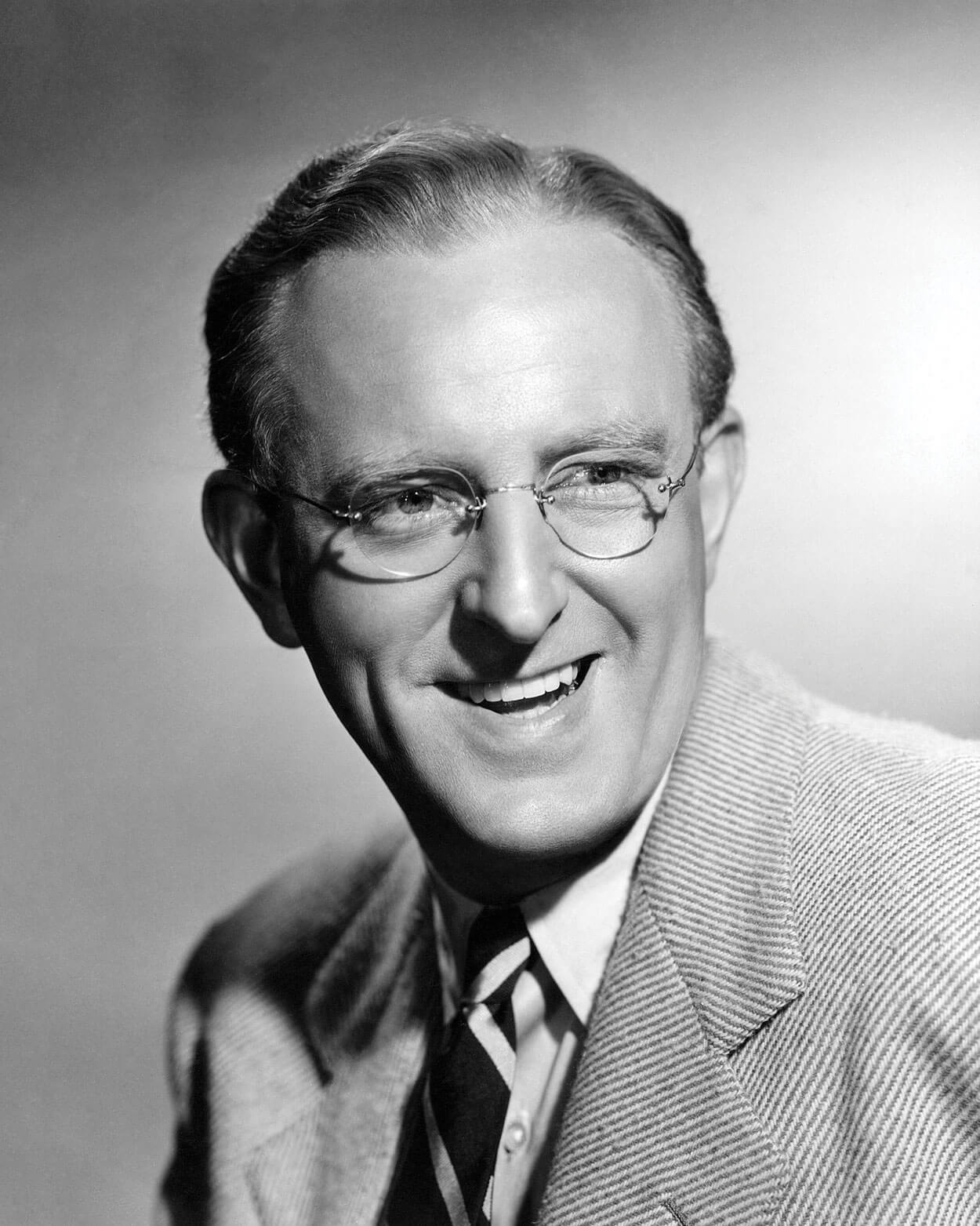 In 1951 — after scoring 35 top-10 records and 11 No. 1 hits — he retires from show business and settles in Chapel Hill. There, he and his wife, Georgia — once a singer in his band — become close friends with Bill and Ida Friday, sharing dinners and ideas.

With the strong support of President Gray, Friday, Carmichael, and Kyser develop a vision for an educational TV station that will extend the reach of the university and serve the people who support it through their taxes. Friday acts according to a deeply ingrained progressive ethic: The university should foster socially responsible civic leadership. To do that, it needs to connect not just to students but also to the larger public. And broadcast television is an effective way to make that connection.

For two years, Kyser, Friday, and Carmichael embark on a different kind of tour, crisscrossing the state in search of dollars to fund the new venture. In this fashion, they raise $1.8 million in cash and services from more than 20 companies, as well as individuals and corporations, leveraged against a modest initial appropriation of $217,000 from the legislature. 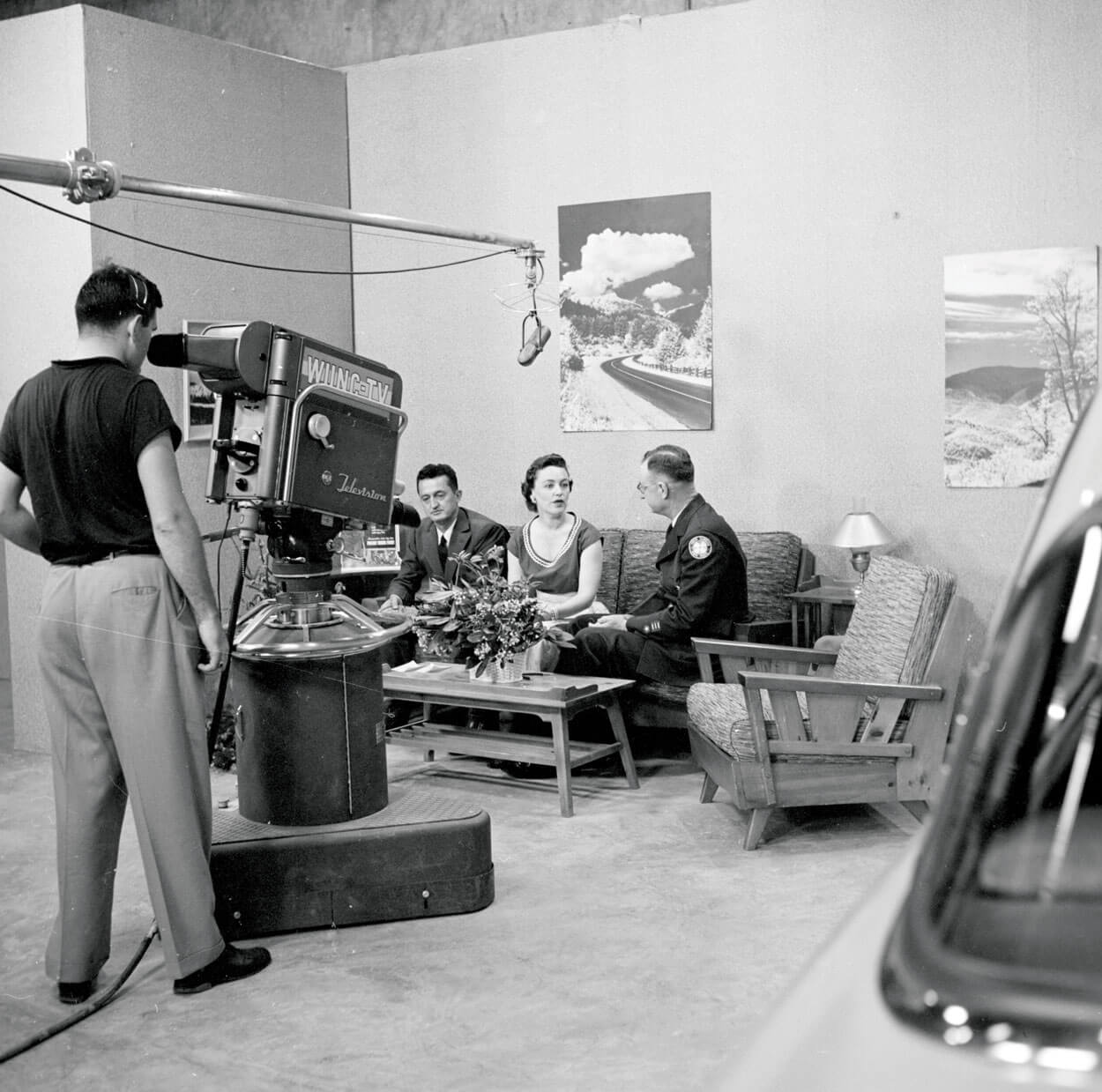 Viewers across North Carolina could learn about the landscape of their state on Variety Vacationland. photograph by State Archives of North Carolina

At the outset, WUNC-TV leaders set lofty goals for the station. In 1955, Robert Schenkkan, the director, tells his colleagues at a District IV meeting of the American College Public Relations Association, “We must create a programming policy which has sufficient variety and breadth of appeal, so that the educational station is vital as well as educational.”

In 1956, the station itself becomes a classroom, offering students from UNC and other schools the opportunity to help WUNC-TV achieve that vitality. That spring, the student-producers receive national attention for the first television adaptation of William Saroyan’s Hello Out There — a short play set in a small Texas town in which an itinerant gambler is jailed on a false charge of rape, falls in love with the jailhouse cook, and plots escape, but instead is set upon by a lynch mob led by the purported victim’s husband. It’s an ambitious project, exactly the kind of program that fulfills the mission of educating by entertaining.

At the Raleigh studio, the students learn from Roy Johnston and his professional crew, who offer workshops in the elements of broadcast production: operating a camera, setting up lights, staging scenery, directing actors and other on-screen personalities, and operating the control board.

“Every Tuesday and Thursday afternoons, nine Meredith girls will be seen in Bermuda shorts or blue jeans leaving for WUNC-TV,” reports the Meredith College Twig on March 16. “Upon reaching the studio one might see Joyce Herndon frantically pushing the numerous switches in the control room, or Kitty Holt with her earphones trying to tell Liz Jones to get Camera One in focus on Margaret Tucker and at the same time listening to Jean Puckett who is working with the lights. In another section of the studio Janice Dennis might be seen turning pale because Nancy Young has assembled the wrong scenery, or because Mary Edna Grimes has Camera Two focused on the ceiling instead of on Kay McCosley.”

At the end of their apprenticeship, all of the young women from Meredith participate in a series of televised dramas.

After President Gray resigns in 1955 to accept a position in the Eisenhower administration, Friday is appointed interim president of UNC in 1956, at the age of 35 — and within the year, the appointment becomes permanent. He remains president for 30 years, making him one of the longest-serving university presidents of the 20th century — always a tireless supporter of public television. One of his goals is to extend the broadcast reach of WUNC-TV to all 100 counties. Within five years, he makes significant progress: Four more stations are approved, and the invisible VHF signal can now reach 60 percent of the state.

By 1960, the WUNC-TV schedule features a wide-ranging lineup of programs. It offers music: Two Centuries of Symphony, Serenade, and Spotlight on Opera. Education: Trigonometry, Geology 41: the College Year, and Understanding School Music Literature. Public service: Social Security in Action and Today on the Farm. History and geopolitics: Yesterday’s Worlds and Commonwealth of Nations. And news at midday, evening, and night.

Friday’s behind-the-scenes role becomes an on-camera one in 1970, when the station debuts North Carolina People — a one-on-one interview show that takes advantage of his warmth, frankness, encyclopedic knowledge of the state, and talent for putting guests at ease. Playwright Paul Green, novelist Doris Betts, journalist David Brinkley, and other leaders in culture, the arts, politics, business, and education take their turns in the guest chair — along with every living governor. “Uncle Bill” — as he is known to the students and staff members at the station — projects a quiet sense of trust leavened with gentle humor. The show gains a large and faithful following and airs for more than four decades, making it the longest-running program in the history of WUNC-TV — which does, at last, fulfill his vision and reach all 100 counties.