In 1988, a team of researchers at Research Triangle Park, united by similar childhood traumas, makes history: Dr. George H. Hitchings and Gertrude “Trudy” Elion are awarded the Nobel Prize in Physiology or Medicine — the first of an eventual nine scientists from North Carolina to be so honored. Their achievement signals the validation of a vision conjured more than 30 years before: to create a high-powered incubator of applied science allied to the three major universities in Raleigh, Durham, and Chapel Hill, and to stamp the state’s signature on burgeoning high-tech industries.

As the visionaries behind Research Triangle Park understood, science is a methodical way of thinking, experimenting, and problem-solving. Applied science requires not just asking the right question but also asking that question in an original, productive way that can be made useful in everyday life.

For generations, scientists have been searching for effective drugs to fight insidious diseases — malaria, arthritis, leukemia, every manner of bacterial infection. And though their research has yielded periodic breakthroughs, their method — trial and error — has been relatively primitive: systematically test one natural substance or chemical after another to find one that works. It’s a slow, laborious, expensive process that offers occasional lucky outcomes but no guarantees.

While working as a biochemist at the Wellcome Research Laboratory in New York, Hitchings pioneers a new approach: What if you turn the procedure around, start with an analysis of the production of DNA and RNA in diseased cells, and design a drug that will interfere with that process? He is inspired by the wartime success of sulfa drugs in disrupting the spread of bacterial infections.

In 1944, Hitchings hires Elion, a part-time doctoral student at the Polytechnic Institute of Brooklyn, to be his lab assistant. At Hunter College, an all-woman campus with free enrollment, Elion achieved an outstanding academic record and earned a degree in chemistry. But as a woman in a male-dominated field, she was offered neither a fellowship nor a teaching assistantship to support her graduate studies and has paid her own way with a series of jobs, among them testing food products for the A&P grocery chain. The Polytechnic Institute then requires that Elion commit to attending fulltime or quit the program. She casts her lot with Hitchings — a decision that becomes a career-long bond for both.

Elion was born in 1918, at the end of the Great War, to Russian and Lithuanian immigrants in New York City. The Depression drove her father, a dentist, into bankruptcy, and only the chance for tuition-free study at Hunter College allowed her to pursue her passion for chemistry and research. After earning a master’s degree from the Polytechnic Institute of Brooklyn and cobbling together a series of jobs in industrial chemistry and teaching, she landed the position with Hitchings, almost 13 years her senior.

Having experienced the loss of loved ones, both are determined to prevent needless suffering through their research.

Despite their differences in age, geographical origin, and educational backgrounds, Hitchings and Elion both experienced the devastating loss of loved ones to illness at an early age. Now, both are determined to prevent such needless suffering and death through their research.

“When it came time at the end of my high school career to choose a major in which to specialize I was in a quandary,” Elion writes. “One of the deciding factors may have been that my grandfather, whom I loved dearly, died of cancer when I was 15. I was highly motivated to do something that might eventually lead to a cure for this terrible disease.”

Hitchings traveled much the same road. “My father died after a prolonged illness when I was twelve years old,” he recounts. “The deep impression made by this event turned my thoughts toward medicine. This objective shaped my selection of courses in high school and expressed itself when I was salutatorian at my class graduation. I chose the life of Pasteur as the subject for my oration. The blending of Pasteur’s basic research and practical results remained a goal throughout my career.”

Hitchings directs Elion to focus on the ingredients of DNA, specifically adenine and guanine — purines that are essential to cell growth. Once they identify the specific purines required for bacterial cells to produce DNA needed for cell growth, they design synthetic ones called antimetabolites that mimic the natural purines and trick the enzymes of diseased cells into bonding with them instead, shutting down cell growth. The pair’s first target is leukemia.

Elion refines the synthetic purine molecule into one called 6-MP, which is successful in treating but not curing the disease. Many leukemia patients treated with 6-MP enjoy a period of remission but then relapse, often fatally. Elion is not satisfied. For six years, she works the problem and, after exhaustive testing, determines that 6-MP, augmented by other specific drugs, can indeed cure most childhood leukemia. It’s a remarkable breakthrough — not just in saving lives but also in validating the Hitchings-Elion method of designing such cures.

In 1970, Wellcome Laboratories moves to Research Triangle Park. Wellcome’s 300,000-square-foot facility — custom-designed by world-renowned modernist architect Paul Rudolph — features a strikingly contemporary S-shaped layout, its steel trapezoidal frame supported by slanted columns. It’s a signature investment for Burroughs Wellcome and Company, architectural proof of the British firm’s commitment to innovation and creative research, and the only Rudolph-designed structure in the state. The “spaceship building,” as it comes to be known, houses 140 laboratories staffed by 400 employees, along with an auditorium and a cafeteria. 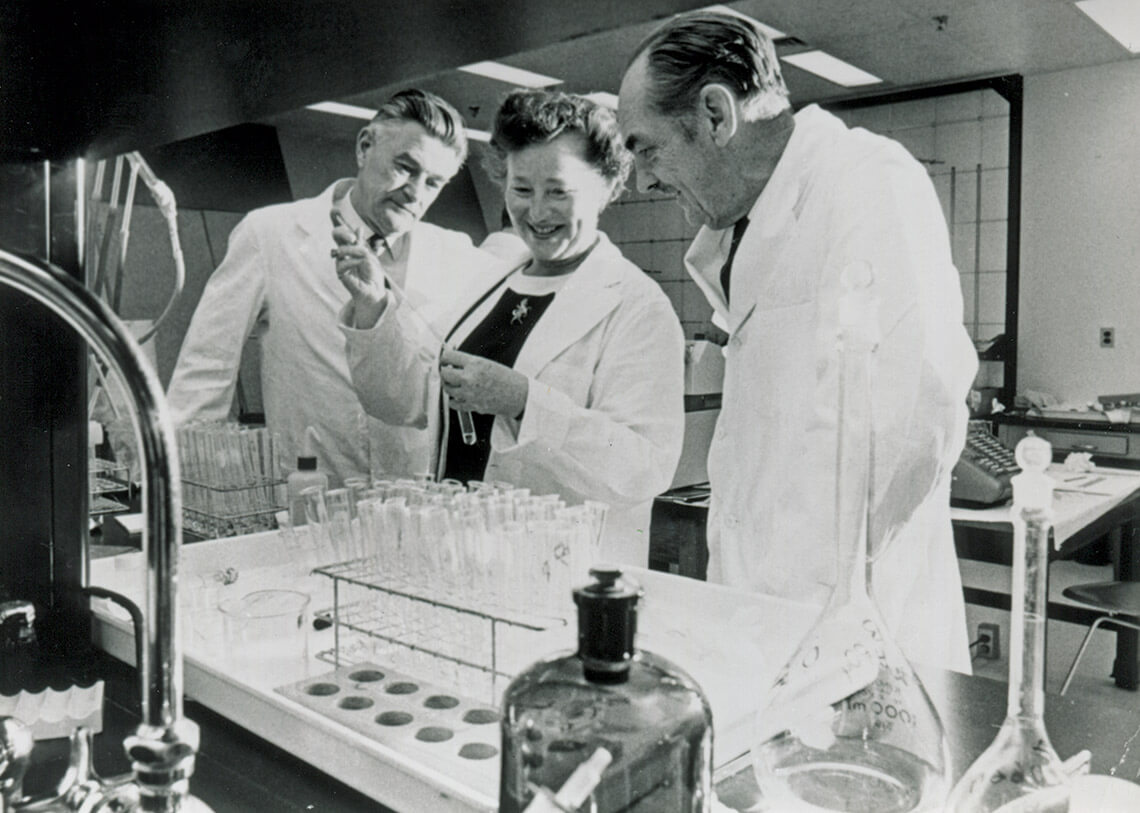 Although they won the Nobel Prize for their overall methodology, Elion and Hitchings, pictured with Stan Bushby (left) at RTP in 1972, also discovered specific drugs that saved or improved people’s lives. Photography courtesy of GSK HERITAGE

At RTP, Hitchings and Elion apply their method to other medical problems. The drugs they design to treat other forms of leukemia also suppress the immune system — a life-saving feature for patients who have undergone organ transplants and are at risk of having their immune systems reject the unfamiliar organs. Hitchings and Elion develop drugs to treat gout, malaria, septicemia, meningitis, and a host of other bacterial infections.

Hitchings has already been rewarded for his innovative approach by promotion to Vice President of Research in 1967. But, like Elion, his passion is for the work, not the status it brings. “My greatest satisfaction has come from knowing that our efforts helped to save lives and relieve suffering,” he writes. “When I was baptised, my father held me up and dedicated my life to the service of mankind. I am very proud that, in some measure, I have been able to fulfill his hopes.”

Nearly 20 years after arriving at RTP, Elion and Hitchings win the Nobel Prize in Physiology or Medicine. They share the honor with Sir James W. Black of King’s College Hospital Medical School in London, himself a former Wellcome Foundation researcher.

Elion remains at Wellcome until the end of her career, retiring as head of the Department of Experimental Therapy — a new paradigm for research laboratories — which by then includes about 50 scientists from diverse specialties. “This department was sometimes termed by some of my colleagues a ‘mini-institute’ since it contained sections of chemistry, enzymology, pharmacology, immunology and virology, as well as a tissue culture laboratory,” she explains. “This made it possible to coordinate our work and cooperate in a manner that was extremely useful for development of new drugs.” 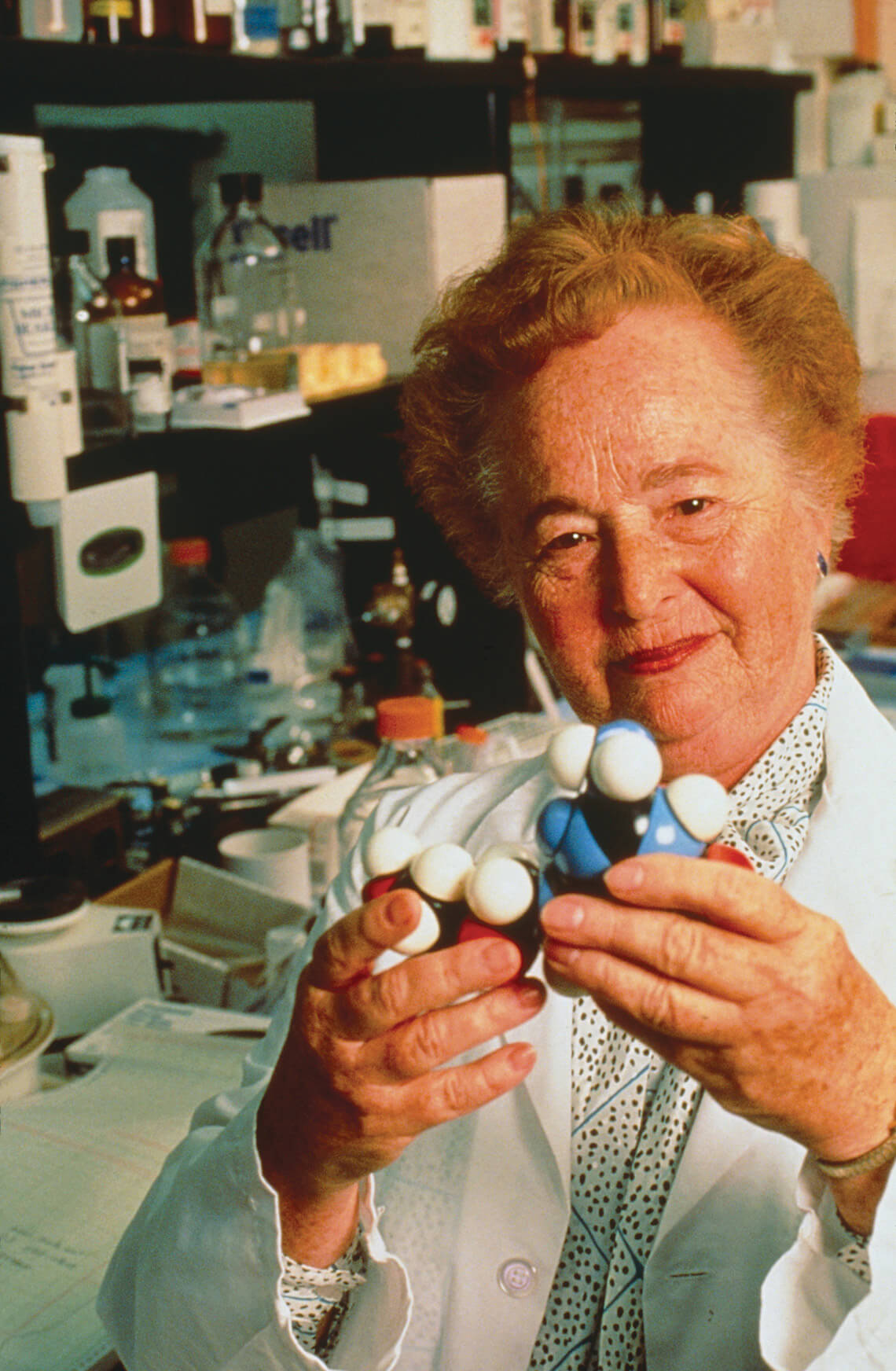 Elion overcame gender discrimination and other obstacles to become the fifth female Nobel laureate in Medicine. In turn, she encouraged students — especially young women — to pursue careers in science. photograph by WILL & DENI MCINTYRE/SCIENCE PHOTO LIBRARY

She stays on at Wellcome as Scientist Emeritus and also accepts a position as Research Professor of Medicine and Pharmacology at Duke University, mentoring a new generation of researchers in her adopted state. Though unable to finish her doctorate as a young woman, Elion receives 25 honorary doctorates from such prestigious institutions as Brown University and the University of Michigan, among many other honors and awards.

In his Nobel Prize banquet speech in Stockholm in 1988, Hitchings describes his and Elion’s shared adventure of discovery: “We were inspired by basic questions concerning the biochemistry of cellular reproduction, and the search led us on a journey filled with new knowledge and exciting discoveries. … When William Faulkner accepted the Nobel Prize in Literature in 1949, he spoke of the verities of the human heart — love and honor, pity and pride, compassion and sacrifice. As a scientist, I should like to suggest three verities of the human mind — curiosity, creativity, and the love of knowledge. The Nobel Prize in Medicine honors these truths, and we receive this recognition with humility and gratitude.”

Coming in May: Immigrants enrich the story of North Carolina.