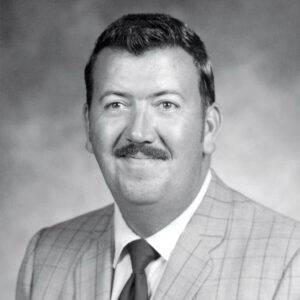 It’s all about the waterbirds.

James F. Parnell, a young Ph.D. from North Carolina State University, never forgets this. In 1964, he accepted a position in the four-faculty Department of Biological Science at Wilmington College (now the University of North Carolina Wilmington). His master’s thesis had taken him to Pea Island National Wildlife Refuge, and after he came to the coast for good, he devoted his career to studying, understanding, and protecting waterbirds. By the 1980s, he has become the most effective champion of the many species that inhabit the coast: The royal tern, a crow-size bird with a distinctive orange-red bill that favors bare nesting sites, where it deposits a single buff-colored egg in a sand scrape, marking its presence with a high-pitched kee-rare or ka-rreet call.

Its smaller yellow-billed cousin, the least tern, also a beach nester, which emits a sharp killick or kip-kip-kip-kiddeek.

The two-foot-long white ibis, which probes tidal flats for crayfish and crabs, then flies away with a startling urnk-urnk-urnk.

The magisterial great blue heron, with a wingspan of almost six feet, which lives on fish, frogs, and small critters, and, when disturbed, flies off with a hoarse, trumpeting squawk.

The brown pelican, up to four and a half feet long, with a wingspan of six and a half feet. “The only nonwhite pelican in the world, this marine bird obtains its food by diving from the air, its wings half folded as it plunges into the surf,” the Audubon field guide says. “During one of these dives, the pouched bill takes in both fish and water; the bird drains out the water before throwing its head back and swallowing the fish.”

North Carolina’s waterways, flyways, and coastal habitat also teem with black skimmers, great and snowy egrets, and cormorants, along with a variety of gulls, other terns, egrets, and herons.

In the late 1970s, Parnell conducted the first survey of all of the colonial waterbird breeding sites along the coast — initially in a Cessna piloted by his student, Frank Henry, and then on the ground. “He flew us up the coast, and we located all the islands and came back and put the field crew together and then revisited all of them,” Parnell recalls. “We surveyed the whole coast in one summer season … I was having a ball. I loved it!”

Walker Golder, a self-described “water rat,” grew up reading Audubon nature books in a house on Wrightsville Beach. And when he wasn’t reading, he was sailing, fishing, or surfing. “I spent every waking hour in the water, on the water, around the water, enjoying every bit of it,” he recalls. At New Hanover High School, he joined an outdoor club started by his teacher — one of Parnell’s former students — that canoed local rivers and hiked sections of the Appalachian Trail. In the early ’80s, as a sophomore biology major at UNC Wilmington, he’s invited to join Parnell’s summer survey crew. “That was just a fabulous summer,” Golder says. “We traveled the entire North Carolina coast, got to see most of it by small boat, going to every island on the coast and counting every nest of every waterbird species.” 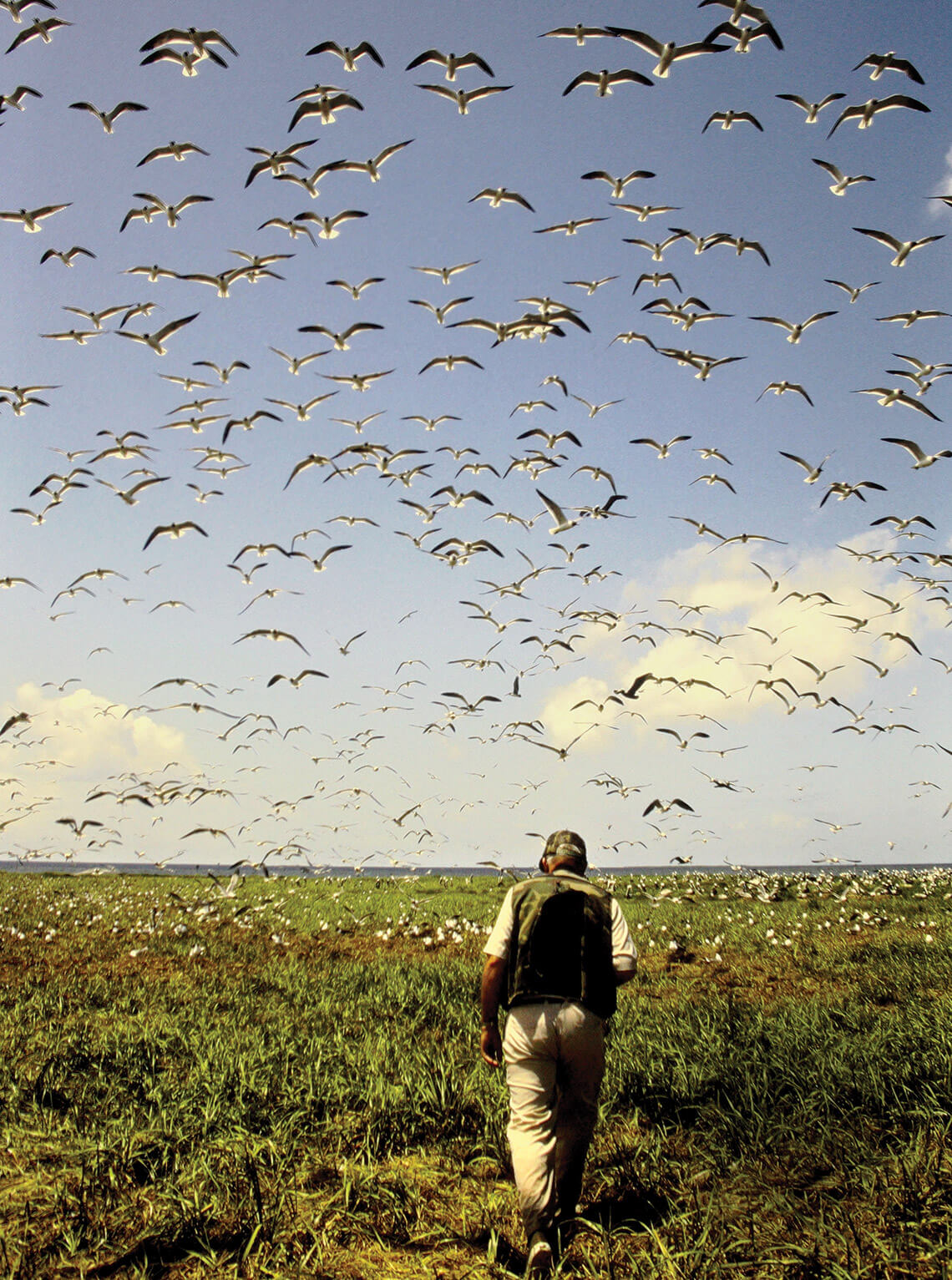 In 1991, Dr. James F. Parnell visited Pamlico Sound to collect data on a laughing gull nesting site there. Parnell conducted North Carolina’s first coastwide survey of nesting waterbirds in the mid-1970s and continued to do so every few years thereafter. photograph by WALKER GOLDER

After that, he says, “I took just about any course [Parnell] offered.” For Golder, the young, congenial professor becomes a mentor and role model, and the two begin a lifelong professional collaboration. “He treated every student so kindly and politely,” Golder recalls. “He enabled them to learn from him by participating in the work that he was doing.” Parnell’s easygoing manner only increases the respect that he garners from his students: “He was up on a pedestal,” Golder says.

Meanwhile, maintenance dredging of the Intracoastal Waterway and other channels by the U.S. Army Corps of Engineers has built up selected sandbars into “spoil islands,” formed by repeated dumping of the sand.

Officials at the Corps learn that birds are now nesting on some of them. They approach Parnell to investigate the situation. He recounts their queries: “Which island [should] the Corps deposit on and when? Which island [shouldn’t] they deposit on at a given time? That was what the Corps was interested in knowing, especially when they were doing their planning. We didn’t want them to dump sand on an island that had birds on it.”

Parnell recognized that dredge material islands can mimic natural habitat conditions. “What Dr. Parnell also realized at the time,” Golder says, “was that there was very little research on the importance of these islands to birds. And nobody was looking after these islands — none of these islands were protected by anybody.”

Several of Parnell’s biology students hold full-time positions with the Corps, and they bring their ecological ethic to their work. “They were champions for waterbirds — they were really terrific folks who wanted to do the right thing wherever they could,” Golder says. “The Corps moves a lot of sediment around, more than anybody else. They can do good things with it, or they can do bad things with it. Dr. Parnell wanted to push them in the right way, to do good things with that sand, to restore or create habitat for nesting waterbirds.”

Some birds, such as royal terns, require bare sites for nesting; others, such as egrets and herons, need foliage cover. So it’s crucial to orchestrate the timing of which islands are replenished with new strata of bare sand and which are allowed to harbor vegetation.

Once Parnell’s crew has extensive data, he can recommend a course of action, but it then becomes the job of the Corps, other agencies, or nonprofits to act. “We were fact-finding — we were not managing,” he explains. “That’s where Audubon came in.”

Parnell enlists the aid of a faculty colleague, Donald A. McCrimmon, to invite Audubon into the process — which also includes the North Carolina Wildlife Resources Commission, the Corps, Sea Grant (a major early funder), and other parties. “Dr. Parnell led the effort,” Golder recalls. “He pulled together the right partners at the right time.” Parnell’s amiable nature and his ability to present data in a clear and concise manner, comprehensible to both scientists and policymakers, combine to create effective and durable collaborations.

In many ways, the Corps was crucial to the success of the program. “We didn’t try to run over them — we tried to work with them,” Parnell says. “They couldn’t always do exactly what you wanted, but when they could help, they did. They actually funded us at times.”

Because dredging is undertaken during the winter — nonbreeding — months, Parnell makes sure to ferry his partners in the Corps to the nesting grounds in the summer, so they can see firsthand the positive effects of their decisions. 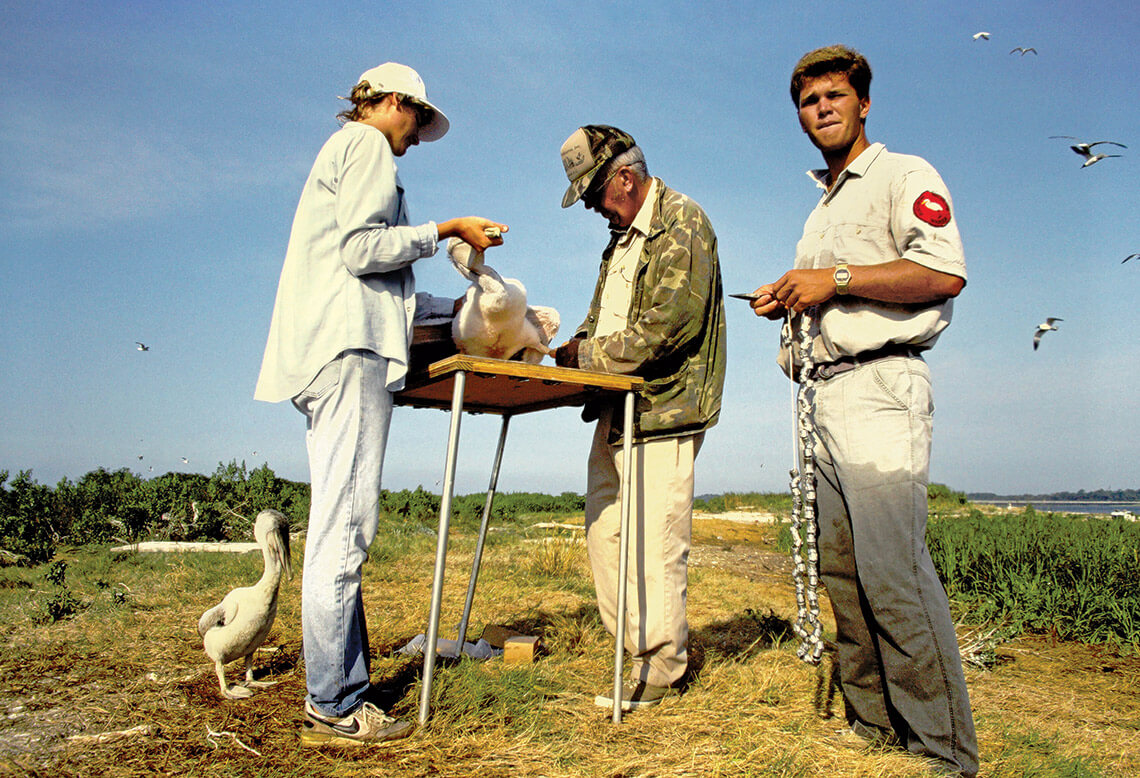 In addition to his conservation work, Parnell also conducted long-term research on coastal waterbirds. On an island in the Cape Fear River, Parnell (center) and his team fitted brown pelican chicks with aluminum bands that, over the birds’ lifetimes, would reveal data about survival, migration, and more. photograph by WALKER GOLDER

In 1982, Audubon leases from the state Battery Island in the lower Cape Fear River. From Parnell’s early work there, funded by Audubon, derives the germ of a coastal sanctuary system. Audubon has a history of creating waterbird sanctuaries, including multiple-island sites in Texas, Florida, and Maine. “So you had a model in place; you had a need in North Carolina,” Golder explains. “He brought the partners together, then Audubon said, ‘Let’s establish a sanctuary system in North Carolina like the other ones that we have.’ ”

In 1989, Audubon formally inaugurates its Coastal Islands Sanctuary Program to protect and restore nesting habitat for waterbirds. From a modest start — just two islands in the Cape Fear Estuary, Battery and Striking islands — the system eventually encompasses more than 30 sites from Dare to Brunswick counties, 21 managed by Audubon and the others managed directly by the NC Wildlife Resources Commission.

It’s hard to measure the exact impact of the sanctuaries — the natural environment is complex and dynamic — but there are significant clues. “When we first started, there was one colony of brown pelicans with a hundred or so pairs, maybe,” Parnell says. “In 2020, I think there was something like 5,000 pairs of brown pelicans nesting in North Carolina.”

Golder, who eventually becomes deputy director of North Carolina Audubon and subsequently executive director of the NC Coastal Land Trust, says, “[Parnell’s] work spread throughout all the other states on the Atlantic Coast.” Parnell achieves a reputation among the international Waterbird Society not just as an expert on coastal waterbirds but also as a leader in waterbird conservation who can organize real-world solutions to environmental threats to birds by getting the right people around a table to form a plan of action.

Parnell downplays his own role in the effort to establish the waterbird sanctuary system. “I just happened to be here at the right time and got in it as it started,” he says. “I’ve been real pleased that it has worked out the way it has.”

But Golder is emphatic: “Rest assured, he deserves the credit, and his colleagues would say the same.”

Indeed, in 1995, the North Carolina Wildlife Resources Commission confers on Parnell a signal honor, naming the entire archipelago of sanctuary sites the “Dr. James F. Parnell Waterbird Sanctuary System.” David Allen, supervisor for the Eastern Region of the Commission’s Wildlife Diversity Program, explains the rationale: “Dr. Parnell did most of the early work on colonial waterbirds in North Carolina. He worked a lot with the Corps of Engineers, worked a lot with us, the North Carolina Wildlife Resources Commission, and he wrote the first management plan for waterbird management in North Carolina.”

Parnell says simply, “I thoroughly enjoyed it all and felt like we were doing some good.”

Coming in July: The tragedy of the space shuttle Challenger shapes a generation.