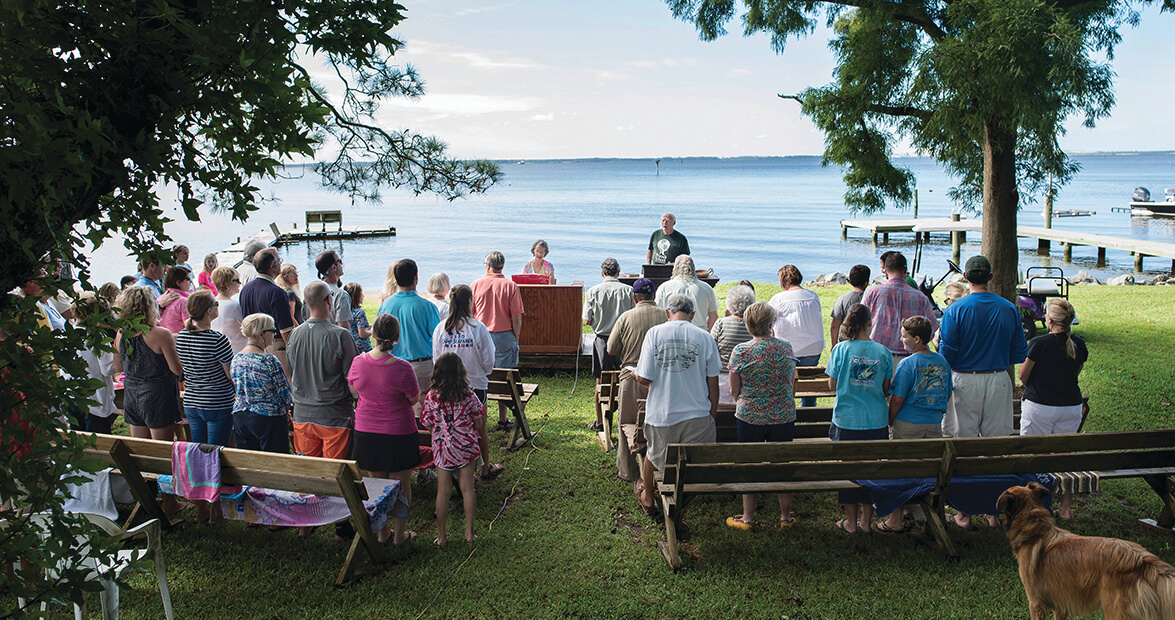 The only time I ever heard my mother cuss was during a dogfight at the Rest Haven Sunday School. It’s been our summer church for as long as I can remember, this open-air sanctuary in a neighbor’s front yard down by the river, six miles east of Bath. On this particular morning, as Miss Myrtie pumped out the first chords of the opening hymn on the organ, and the congregants settled into the wobbly wooden pews, a snarl of dogs, untempered by the grace of Sunday morning, came crashing up the grassy aisle.

They had their eyes fixed on Mr. Tinker, my sister’s nervous, half-blind Boston terrier mix, who was sitting by my mother. The pack swarmed my mother’s feet, and as she pulled Mr. Tinker from the scrum, she let fly a well-known, two-part word that North Carolina farm boys used to holler at their mules. In church, mind you. And so close to our weathered desktop pulpit that she almost knocked it over.

My sister and I were delighted.

The power of words is what brings us together — four generations of river rats — at the Rest Haven Sunday School. But it’s the river itself that binds us, and keeps us coming back. Once every summer, my dad takes a turn at the pulpit, as does a representative from every family. Weekdays, he’s a criminal defense attorney in Raleigh, but here he wears blue jeans with holes. I always liked it when people compared him to Atticus Finch, because that secretly meant I was his Scout. On Sundays at the river, when it was his turn to preach, he spoke about Goliath and the good Samaritan, courage and justice, while my sister and I tickled our feet in the grass and listened to the music of his words.

Or, looked for funny shapes in the clouds.

A friend of mine once told me that growing up, he’d counted tiles on the sanctuary ceiling when sermons ran long at his church. I counted crab pot buoys. Once, a snake pulled up from the rocks and jawed an eel for a good 10 minutes. Mostly, though, I was just biding time until I could jump back in the river. I like to think that I was learning something, too, but it wasn’t until I was grown that I realized the hours I spent in our cathedral of cedars and sweet gums listening — or half-listening — would be an essential mooring. Even, or should I say especially, as I explored foreign shores.

We don’t have a pastor or a board of deacons, unless you count the families, both weekenders and full-time residents, who have gathered here at 10:30 every summer Sunday since 1950. Whether we like public speaking or not, we take turns presiding over the service and delivering a sermon. From Memorial Day weekend, when we pull the hymnals and organ out of winter storage in Frankie Rice’s shed, to Labor Day, when we put them all back in, we are a congregation.

Bound by our love of the Pamlico, ours is a fellowship of neighbors cultivated by years of hurricane cleanups, boat rescues, fish suppers, and secrets whispered on the pier while looking at the stars. Cottages rarely change owners outside of direct kin, so most of us can recall each other’s favorite childhood memories. If you’re late to the service, the worst that can happen is that all the worn-out hymnals might be taken. But that doesn’t matter, because for 67 years the service has opened the same way — with the hymn we all call “Beautiful River,” which we learn by heart as kids, just as we learn the difference between the calls of the fish hawk and the fish crow.

“Beautiful River” is followed by an introduction of guests and announcements — birthdays, updates on relatives, reminders — for which there are no rules. (Tony is always trying to get rid of his extra pattypan squash.) A time-honored tradition holds that kids, or the youngest member present, take up the offering. Last summer, on a slow Sunday when neither my kids nor anyone else’s were in attendance, I found myself, at 51 years old, stepping over dogs, collecting dollar bills in the same wicker basket I had held in my youth, keeping my hand on top of the money so it didn’t blow away.

When I was a kid we handed the collection baskets to Roy Smith, the church secretary. Roy was a church founder. Part sage, part river rat, every bit a gentleman, he knew more corny jokes than anyone and often sprinkled them into the lesson when it was his turn at the pulpit. He had a classic eastern North Carolina accent that made words like “five” and “dollar” sound like they’d rather be relaxing in a hammock. Every week, just before the final blessing, Roy stood up and gave the secretary’s report: “We have an offerin’ of 70 dollahhhs and an attendance of eighty-fahhhv.” Sometimes that was the best part of the service.

Frankie, my childhood friend and a former competitive water-skier, now gives the secretary’s report. A few years back we replaced the pump organ with a keyboard, which is more reliable in the humidity and has a special feature that allows for recording staple hymns like “Jacob’s Ladder” and “Blessed Assurance,” which come in handy when our organ players are absent. (No one likes the a cappella sing-alongs.) The service still can’t run longer than 30 minutes, a custom monitored by the under-10 set, who, in their eagerness to get back to jumping off the pier, begin fidgeting as soon as the Bayview-Aurora ferry reaches the “late” marker.

It is, in other words, always the same, even if we are not. In my 20s I became a practicing Buddhist, but that didn’t change my love of singing “What a Friend We Have in Jesus.” And when I later married a Muslim man whom I’d met on his tidal river, near the Aegean Sea in Turkey, the Rest Haven men welcomed him as a fellow fisherman. At our wedding we handed out tiny vials of water from both sources. When my mother-in-law, a village woman who wore hand-stitched scarves and spoke no English, visited me, she came to our church, arm in arm with my mother.

I whispered the chorus of “Beautiful River” to each of my sons within minutes of their birth. Here, their childhood is the same as mine. But they’re growing up in a mix of spiritual traditions grounded by the Pamlico and the Sunday school where, like my sister and me, they know all the dogs by name.

At a service when my elder son was 5 years old, he stood up and announced the death of his goldfish, Mehmet. He invited everyone to attend the burial following Sunday school, and 20 people showed up. My dad downloaded Bible verses on his Kindle, and Mehmet’s headstone was appropriately placed facing Mecca.

For 40 years my family has presided over the final service on Labor Day weekend. My father spends the year musing over what he will talk about on that last Sunday. One year, when he was tied up in court, I wobbled up to the pulpit eight months pregnant to do my duty. I have no memory of what I said, but I remember how I felt: hot, huge, full to bursting with hope and joy and trepidation about this new role, mother. And preacher.

The passage of time is often on my father’s mind when it’s his turn at the pulpit: comings, goings, hardship, friendship, winter, summer again. I watch my boys and my nieces listening to their grandfather and wonder how long it will be before they deliver the sermon, how their experiences will shape the future of this congregation.

By early September the gentle dead-man swells have returned to the river, and we say goodbye to another season. Before we carry the benches back to storage, we vote on what to do with the money collected over the summer. Roy, with his unhurried vowels, would always announce the tally.

Last year, when Roy died, I missed that voice almost the minute I heard the news. His funeral was held in Greenville at his “year-round” church, a polished sanctuary with high ceilings and stained-glass windows that glow in the morning sun with pictures of Jesus. When I walked in, it was hard to think of it as his real church. But it was. And we were all there, too.

My parents and I slid into the glossy pews next to our Rest Haven friends. We marveled at how nice we all looked — shiny hair, clean-shaven, with proper shoes and purses. At the river, Roy wore shorts and could be found, more often than not, in his favorite spot under the cedars in his yard by the water, visiting with folks. That’s where he and his wife, Maggie, were sitting the time my younger son, then 4 years old, chased Roy’s beloved Chihuahuas with an arrow we’d bought the week before at The Lost Colony.

My boy was fierce, having been chased all summer by those dogs. Roy broke the three apart, his face red from the commotion. “Robyn,” he said, “those boys need their father.”

Those words were a rope burn. My divorce was still fresh, and this shook my already fragile conviction that I could be everything the boys needed. All that summer, and the next, I stayed at it, rebuilding our lives in the place I felt most at home. I hauled kayaks, threaded shrimp on fish hooks, picked splinters out of feet, taught the boys to throw a cast net — and encouraged friendship with the Chihuahuas.

As I walked up and down the pier, I often waved to Roy and Maggie in their spot under the cedars. I had thought that they were watching the river, until one day Maggie said to me, “We’ve seen you, Robyn. You’re doing a good job.”

My heart could have burst.

I thought of that as the organist at Roy’s funeral began playing the opening hymn, “Beautiful River.” Roy’s request. Yes, we’ll gather at the river, the beautiful, the beautiful river. We sang out four verses, arm in arm, no hymn books in our hands.