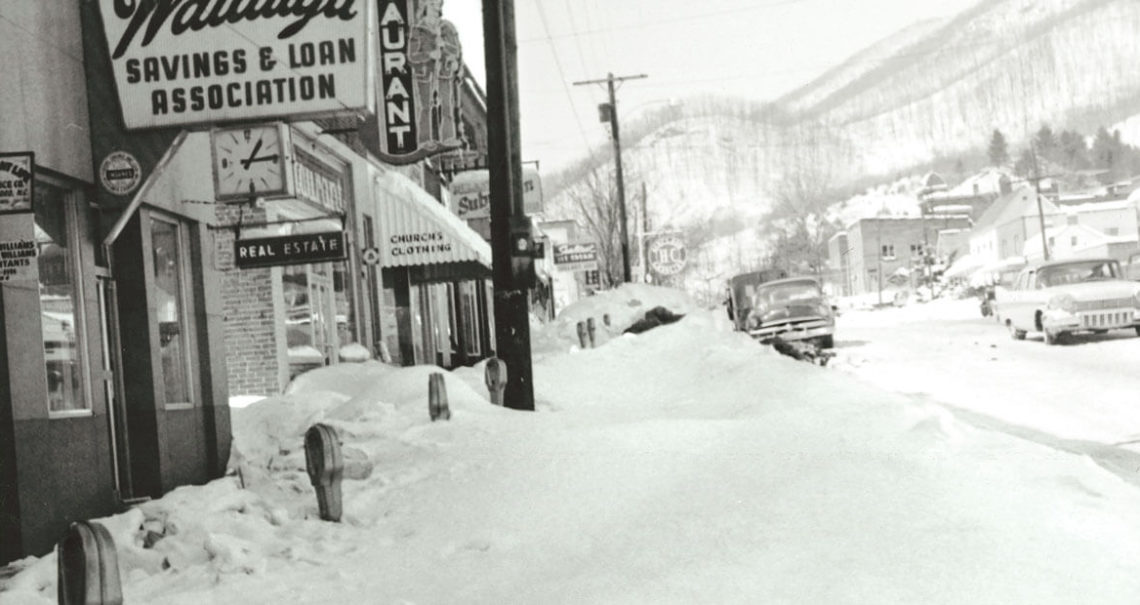 The snow begins late on Friday, February 12, 1960, and continues through the night, all day Saturday, and into Sunday, dropping 16 inches on Boone. As road crews clear main highways, secondary roads remain clogged with heavy snow. Temperatures hover below freezing. Schools shut down through the following Wednesday — just in time for a new blizzard on Thursday.

Manilla Davis Walker, a 44-year-old widow from Winkler Creek, needs to buy essential groceries and ingredients to make a birthday cake for her son, one of five children she manages to care for on just $100 a month — along with her elderly mother. It’s not snowing yet, so on Thursday morning, she decides to walk the two miles into Boone. She has no telephone to call for a taxicab, and even if she did, she would not spend money on such a luxury.

Her daughter Tula Smith, 12 years old at the time, recalls the moment of parting: “I can still see her standing at the door in her brown corduroy pants, looking back at me and admonishing me to ‘help mama with the babies’ — I had begged her to let me go with her.”

Walker arrives in town, where she makes her purchases. But the new snowstorm has started. A local taxi driver named J.O. Cooke offers to drive her the two miles home — without charge. A police officer warns the pair against venturing out. He even advises Walker to weather the storm at City Hall. But she is determined. So at 7 o’clock, Cooke begins the treacherous drive back to Winkler Creek through the blinding snowfall. He makes it barely a mile before the heavy, drifting snow and poor visibility force him to turn around. But his passenger refuses to leave her children alone overnight and continues her journey on foot. The Watauga Democrat later reports, “Mrs. Walker refused his offer to bring her back to town, and vanished into the storm with the bag of groceries.”

After she leaves Cooke’s taxi, Walker tramps on through darkness and blowing snow, determined to cover the last mile home. A little more than half a mile along, she veers across a field, a shortcut to her house. She makes it about a quarter of a mile before succumbing to cold and fatigue. She scrapes out a place for her bag of groceries under a granite outcropping and sets it down. She lies in the snow all through Thursday night and Friday. When the storm breaks on Saturday, a search party of sheriff’s deputies and neighbors scours the road between Boone and Winkler Creek. Her brother, John Davis, spies what looks like clothing fluttering in a field. He discovers the body of his sister, buried in snow. She lies only a couple hundred yards from her doorstep.

It’s a devastating end to her journey, one that haunts her daughter’s imagination for the rest of her life. “As a girl in the orphanage, that night played out in my dreams and nightmares for years,” Tula Smith recalls. “I remember lying in bed that first night, crying and praying she was all right. I dreamed that night that I heard her calling me from the darkness. Ever afterward, I would dream that I was back in the bedroom, and I could hear her calling me again. I often thought, ‘What if she really was calling me and I just didn’t hear her?’ She was found just 200 yards from the door, so it was a possibility that I couldn’t let go of until years later. The nightmare finally faded, as did the sound of her voice and her laughter. I still see her smile, though, and still remember her love. I often tell people that mother was so poor that she only had two things to leave me: my name and her love. And that was enough.”

In the mountain counties, a series of five blizzards delivers 17 snowfall events between mid-February and late March, while ice storms plague Charlotte and other cities to the east. During that six-week period, Boone gets nearly seven feet of snow, while the rest of the winter months account for almost two feet.

As brutal as the weather is in February, March brings even heavier snow and lower temperatures, with high wind gusts. Gusts are probably stronger at higher elevations, but weather observers are unable to reach the weather station atop Grandfather Mountain — the roads are blocked by huge drifts. The Department of Commerce reports, “This was by far the coldest March on record in North Carolina. Every one of the first 26 days of the month was below normal in temperature, some days as much as twenty to thirty degrees below normal … This period, along with the last several days of February, was the longest unbroken period of sub-normal temperatures in over seventy years of weather records.”

The Weather Bureau adds its own comment: “This is by far the worst March ever experienced here. Most snow, most cold, most everything bad. Groundhog could do better.”

Outside Boone, mature apple trees disappear under snowdrifts. Schools close for a month.

The culprit is a radically abnormal airflow pattern in the upper atmosphere, depressing the jet stream far southward and funneling frigid air from Western Canada into the Lower 48. The northwest flow produces some cold “clippers” that dump snow on the higher elevations an average of every second day, adding to the usual mountain-generated snows. Five low-pressure systems ride up from the Gulf of Mexico, fueling the cold fronts with moisture, creating an additional rolling series of five big blizzards in as many weeks — the snowiest period on record for the Southern Appalachians. The whole Eastern Seaboard struggles in the grip of a hard winter: March 1960 breaks more records for cold and snow than any previous March.

In Watauga County, snowdrifts eight and 10 feet high block roads, and exhausted maintenance crews work around the clock to clear them in the face of the relentless snowfalls. J.H. Councill of North Wilkesboro, 11th Division Engineer, tells a reporter, “It’s just like a cocked pistol. You don’t know when or where it will strike and, when it does, we have to be on top of it.”

The snow is so deep on Old Beech Mountain in Avery County that the driver of a road grader loses track of the very roadway he is plowing, and the big machine careens downslope into a hollow, where it becomes stuck in the deep snow.

Observers in Ashe County report snowdrifts 20 feet high. Outside Boone, mature apple trees disappear under snowdrifts. Schools close for nearly a month. Drifts and fallen trees block many roads, and telephone outages are widespread. Businesses are shuttered, churches closed. Even the U.S. Postal Service can’t always get through. North of West Jefferson, near Smethport, a Norfolk and Western train slides clear off the icy tracks.

The blizzard inevitably produces a few more tragic stories. At Appalachian State Teachers College, janitor George Trivett, 52, is guiding a truck loaded with precious heating coal as it backs up to the Justice Hall dormitory for men. He calls out the distances to the driver, 38-year-old Ralph Cox, as the truck backs nearer and nearer to the building. Trivett signals him to stop, and Cox hits the brakes, but the heavy truck slides backward on the snowy, ice-slick drive and crushes Trivett to death against the masonry wall. Trivett leaves behind a widow and six children. 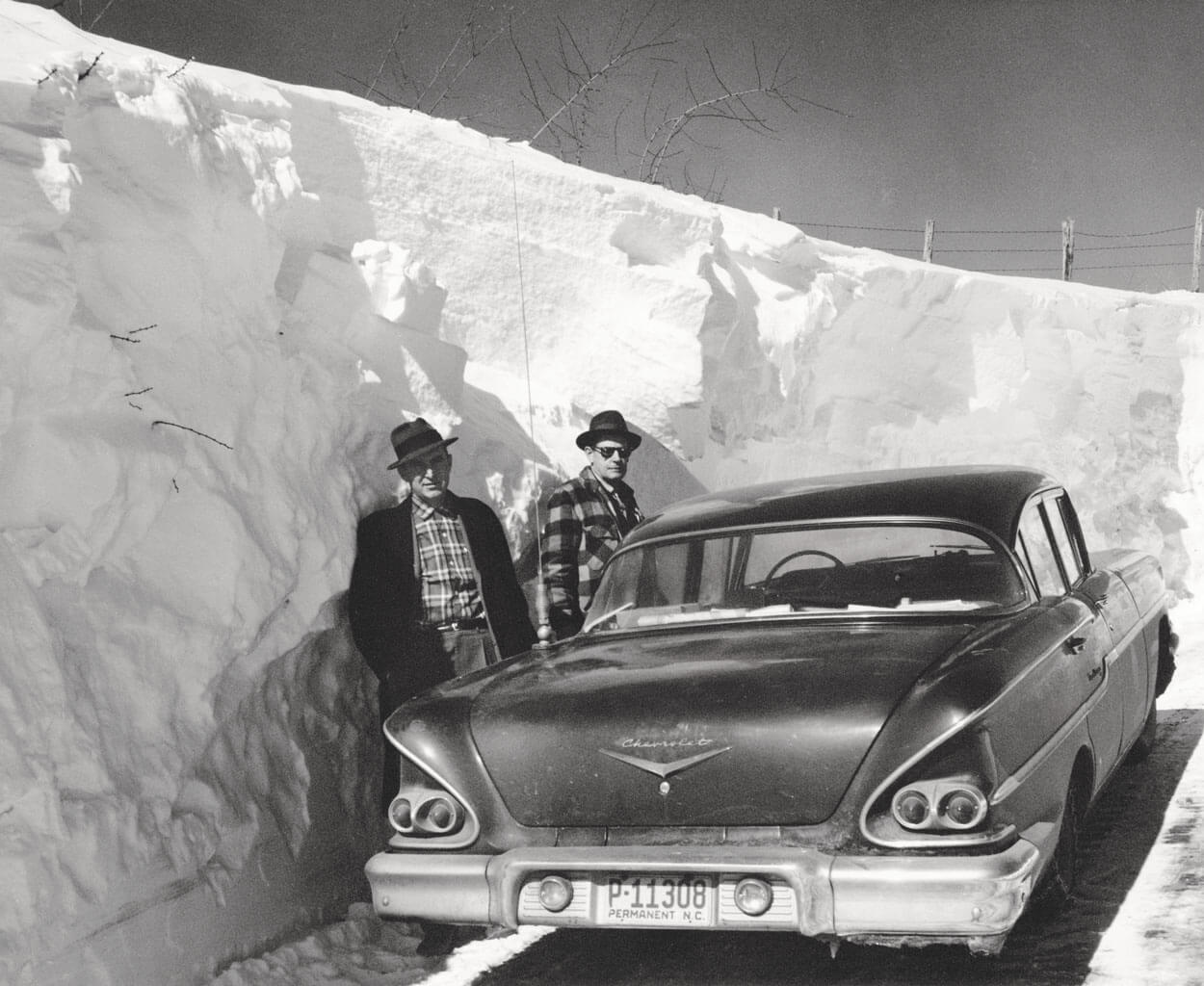 North Carolina’s mountain communities were used to snow, but the early months of 1960 broke records — and rendered the landscape unrecognizable.

Because the temperature stays below freezing, the new snowfalls pile on top of the old, and some cleared roads and walkways resemble tunnels, walled in by high drifts that never melt. In some hollows, the snow will cover the ground until early May.

The duration of the storms, the record cold temperatures, the sheer amount of snow, and the tremendous size of the affected area combine to trigger an equally large-scale response. The editor of the Skyland Post, Stella Anderson, wires Gov. Luther Hodges for help, requesting a “large rotary road scraper with blower.” The governor declares a four-county disaster area including Alleghany, Ashe, Avery, and Watauga, and activates the National Guard to respond to the emergency. The Headquarters Co., Second Battle Group, from Hickory, sends 20 men, and the Second Rifle Platoon, Co. C, from Boone, sends 45 men. They work in 15-man shifts, bagging coal and delivering food and other aid. The Red Cross distributes more than 900 packages of food and a thousand bags of heating coal in a single week.

West Jefferson becomes the site of a Storm Command Center, and Governor Hodges visits to assess the extent of the disaster. The Army turns a nearby baseball field into a landing zone for its helicopters, which ferry food, hay, and coal to snowbound farmers and rural households. Even the Boy Scouts pitch in. 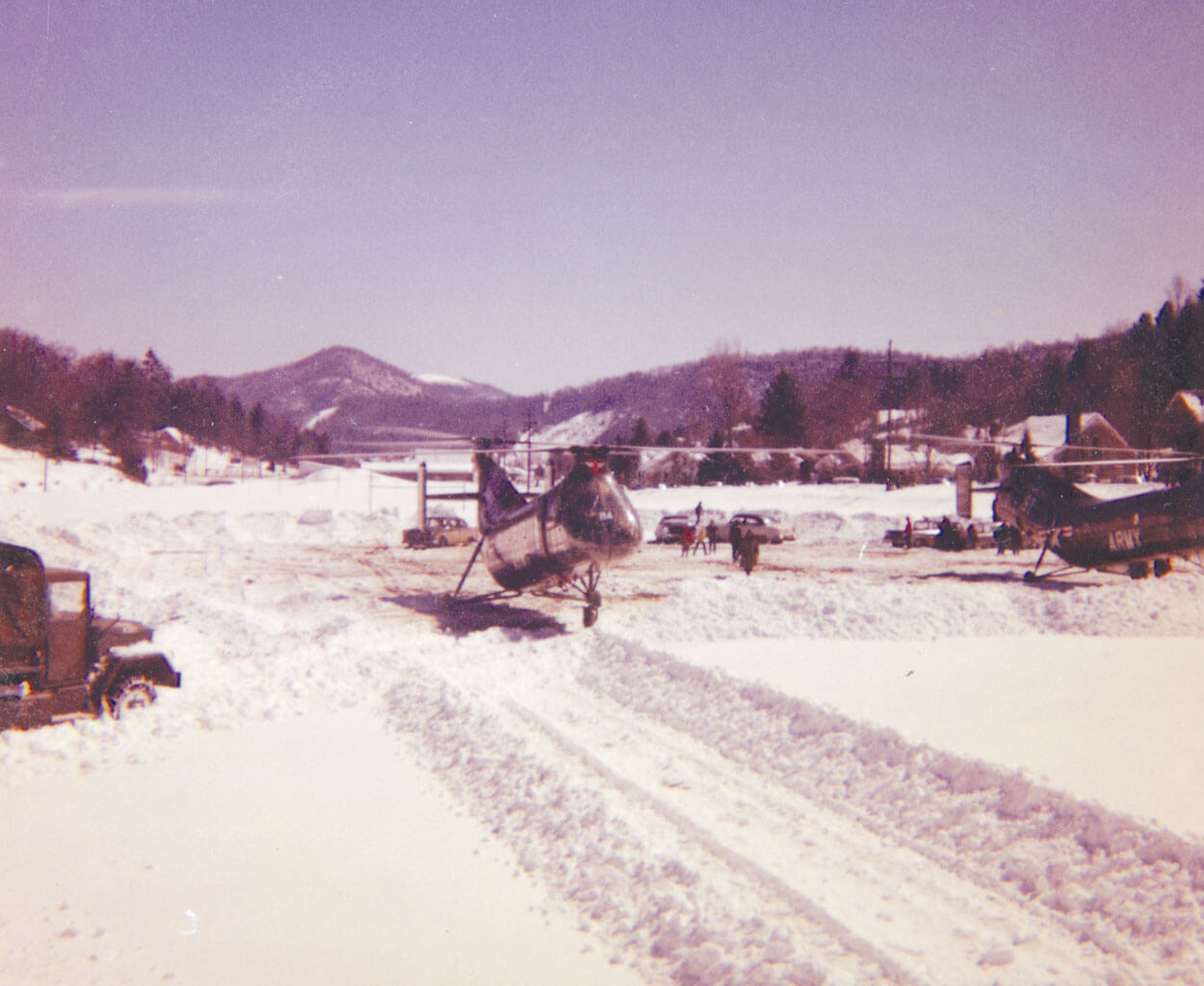 Eastern counties send bulldozers and other snow-clearing equipment. Under normal circumstances, the Highway Department has 63 pieces of snow-removal equipment staged in the affected area. Now, the four counties together field 210 machines. Private contractors rent out their equipment to clear roads, and at least one contractor takes the initiative to put his equipment to work clearing snow without anybody asking.

A humorous tale makes the rounds — one that smacks of the old tradition of the clever mountaineer putting one over on the gullible flatlander: Some Red Cross workers find their way to an isolated cabin to check on an elderly woman. They knock on her door, and when she opens it, they’re relieved to find her alive and well. “We’re with the Red Cross,” they announce. Unfazed, she replies, “I gave already.”

Other stories circulate about air-dropped hay bales falling on cows and bags of coal punching holes in cabin roofs, about pregnant women unable to reach the hospital and thus giving birth at home.

Some old-timers view the massive, unprecedented relief effort with bemusement. They weathered bad winter storms in 1917, 1936, and 1942. But the relief effort is characteristic of a government and citizenry primed not to merely observe but to act — and it offers a new, concerted model for how to handle future natural disasters.

The author is grateful to Dr. Baker Perry, Professor of Geography, Appalachian State University, for providing scientific and technical expertise on the nature of the storm events of 1960, as well as anecdotes from neighbors who lived through the storms.

Lee, Lawrence. “A Review of the Record-Breaking Snow and Persistent Cold of February and March 1960.” NOAA/National Weather Service: weather.gov.