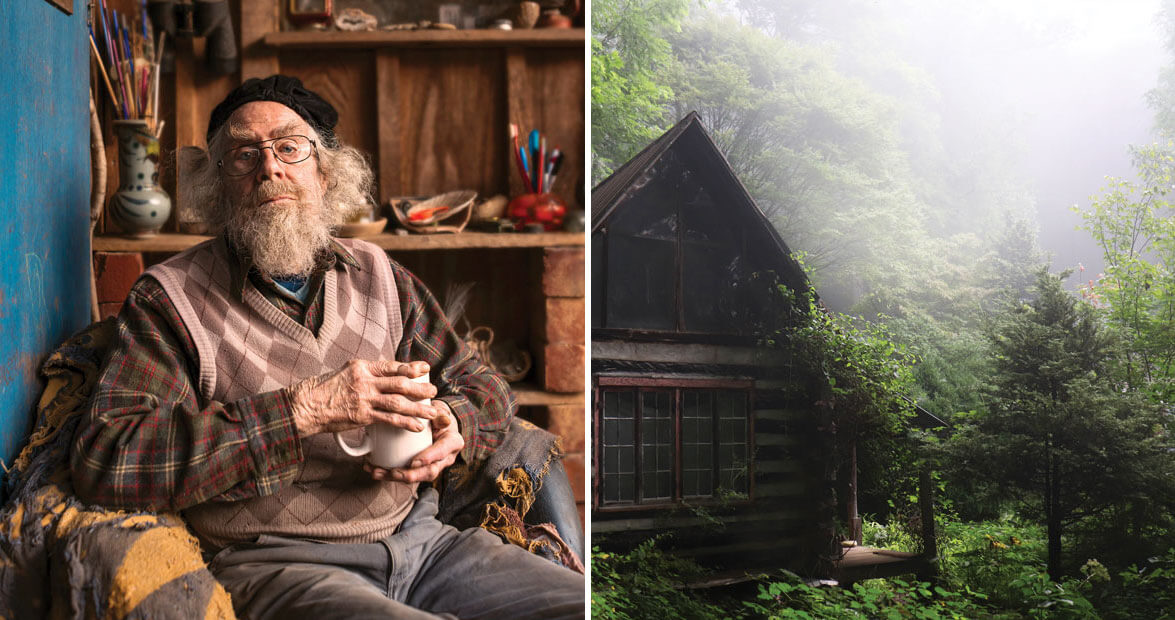 The apprentices have gathered in the apothecary, as they do every morning, trekking from primitive cottages to the common area. From a distance, it’s hard to tell what country, or even which century, they’re living in. Though there are a handful of buildings on the grounds of Mountain Gardens in Yancey County, there are no roads.

To reach the onsite apothecary — where Appalachian and Chinese herbs are transformed into tinctures — you must abandon your vehicle and navigate stony paths. It’s a habitat designed solely for people and plants.

The back door of the apothecary has the gentle curves of a hobbit house. Its shelves are crooked and overcrowded with books — some of them priceless, out-of-print jewels — about Chinese herbs, Asian gardens, and Appalachian medicinals. In the work area, where herbs are turned into remedies, a mortar and pestle sits dormant on an enamel tabletop. On shelves above are blue bottles of tinctures and jars filled with the dry herbs used to make them. Skeletal seed pods hang from string.The scene is straight out of a storybook, doused with magic.

For Mountain Gardens’ apprentices, it’s an everyday sort of alchemy. They know which leaves can be used for colds, which seeds for coughs. Under the tutelage of Joe Hollis — one of North Carolina’s most famously intensive gardeners — they’ve learned which plants can be used for dye and which ones are best dipped in tempura batter and fried. 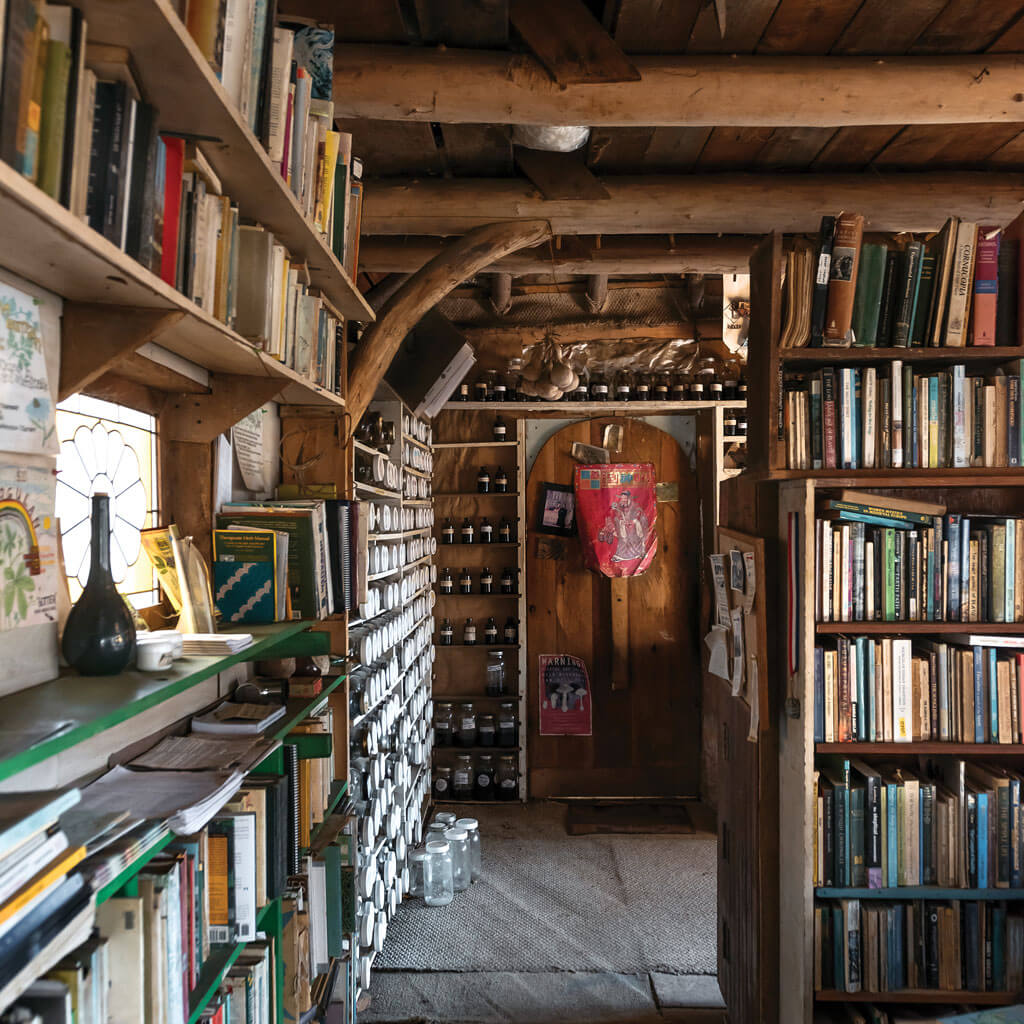 Ancient knowledge lines the shelves of Hollis’s apothecary in the form of rare and out-of-print books. Here, he crushes herbs, roots, and seeds to make healing tinctures. photograph by Jack Sorokin

As the apprentices sip tea and laugh, Hollis traces a slender woodland path that connects the apothecary to his house. He pauses only briefly to see how his resident ducks are faring. Hollis chose ducks over chickens because they have a more gentle pecking order. Also, to him, their honk-chatter sounds like pleasant laughter. “In Chinese gardens,” he says, “the way a place feels matters.”

Hollis is known as an expert in medicinal herbs native to western North Carolina, but he’s legendary for his knowledge of Chinese herbs grown in Appalachian territory, too. He has a particular fondness for plants known as tonics, or adaptogens, for their ability to help the body adapt to stress by boosting the immune system. “Why wait until you get sick and take herbs to cure yourself when you can take them and prevent sickness in the first place?” Hollis says.

“In Chinese gardens, the way a place feels matters.”

In 1972 — when Hollis moved away from Detroit and onto 2.8 acres in Yancey County — he was familiar with the concept of artists’ and writers’ colonies and wondered what it might be like to have a gardeners’ colony, where enthusiasts could gather to share their trade and talents. For nearly half a century, he and a roving cast of characters have been transforming his acreage into what he sometimes refers to as a “paradise garden.” Because, the way he sees it, paradise is having everything needed for a good life growing on-site.

His property now hosts more than 1,000 species of plants from all over the world, including the largest collection of Chinese medicinal herbs in the Eastern United States — arguably, the entire country. Some of his native species are transplants from nearby forests. Others grow in few other places in North America. This unexpected, utopian garden is regularly toured by students from places like The Chestnut School of Herbal Medicine in Weaverville and North Carolina State University’s School of Horticulture for instruction and inspiration.

When Hollis — who has the beret-wearing, beard-twirling appearance of a Beat poet — enters the apothecary, he informs his apprentices that he’ll be going into town later, in case they need anything. One by one, his pupils shake their heads. The garden hasn’t quite reached Hollis’s goal of providing everything needed for food, medicine, and craft. But every year, it’s a little closer. 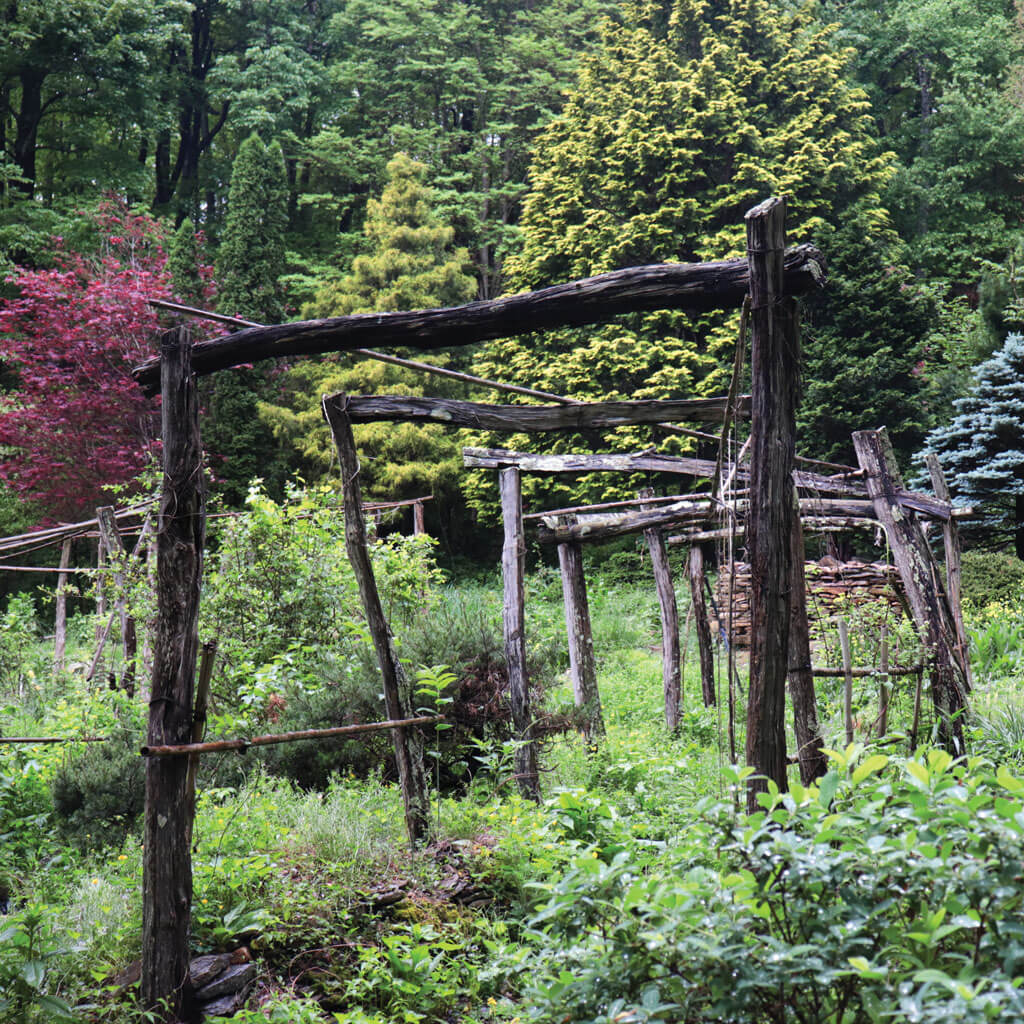 The central gardens bloom with JiaoguIan, a plant that Hollis helped popularize in the U.S. photograph by Melanie Risch

Parts of China and eastern North America have similar bioclimates. They’re mirrored in temperature and rainfall, and they’re home to remnant populations of plants that once encircled the globe. Because of this fact, many Chinese and Appalachian plants are of the same genus. At Mountain Gardens, these ancient, biological brethren are grown side by side. Dang shen, known as “poor man’s ginseng,” creeps and twirls within sight of Solomon’s seal varieties — both Chinese and North American.

When he’s introducing a Chinese herb to a western North Carolina habitat, Hollis studies its history and his property: Does the herb have deep or shallow roots? Does it want alkaline or acidic soil? “Plants fit themselves in where there’s an opening,” he says. “They’re always looking to multiply. It’s about providing an opportunity for them to do that.”

The herbs he grows are firmly ensconced in Asian medical practice. But local knowledge of their usefulness seems to be waning. “People tell me, ‘Oh, my grandmother used to know how to use herbs around here,’ ” Hollis says. “In Southern Appalachia, traditional use of plants is being lost. You have to take a plant walk with someone who knows, if you want to learn, because you’re not likely to learn from your elders anymore. It’s mostly young people who seem interested. Hopefully, they’ll turn into teachers.”

Many native plants have been moved to the garden so that, instead of foraging a forest, the residents of Mountain Gardens can gather botanicals like black cohosh and wild yam in the yard. A few wild foods were already growing on the grounds when Hollis arrived. The native sections of his garden simply offer an abundance of what’s been in Appalachia all along. Some of the species, little known and often over-looked, are adaptogens. In this patch of the garden, Hollis notices dayflowers clustered around his feet.

“These are good to put on beestings,” he says, before pointing to a less comely weed. “This is even better: plantain. Mash it up and put it on a beesting. It’ll draw out toxins.” Almost anyone who’s grown up in North Carolina would recognize plantain as one of the weed species that tends to spring up in the middle of gravel roads that haven’t seen much traffic. It’s growing not only in Hollis’s beds, but also along the garden trails that cross the property like deer paths. His boots find broken stones that test his balance.

Still, he climbs, past hazels and hawthorns. Past more species than most people have ever heard of, their scientific names pressed in his memory like dried botanicals between pages of a book. At the crest of a hill, he pauses beside a smooth-leaved plant that looks familiar. “Hostas,” he says, nodding toward it. “You can cook the leaves when they come up. They look like little tubes, and they’re a delicacy in Japan.” In North America, hostas are almost always planted as ornamentals, in front of houses and office parks.

But just as plantains are medicine disguised as a common weed, hostas are food camouflaged as decoratives. “I could’ve just planted pretty flowers here, but that wouldn’t have been as interesting,” Hollis says, overlooking his acreage from the bank of a spring-fed pond. “If you can eat and heal with plants, it adds another layer of meaning to how you experience them.”

Back in the apothecary, Cristina Asensio measures ingredients for an old Chinese elixir that’s said to promote longevity. She lifts a glass jar to her face and inhales dried reishi’s earthy scent, slowly. It mingles with the smell of a wood fire burning next door. “I love that you can inhale, taste, and feel everything you’re using when making tinctures. Chinese medicine isn’t just powders and pills,” she says. 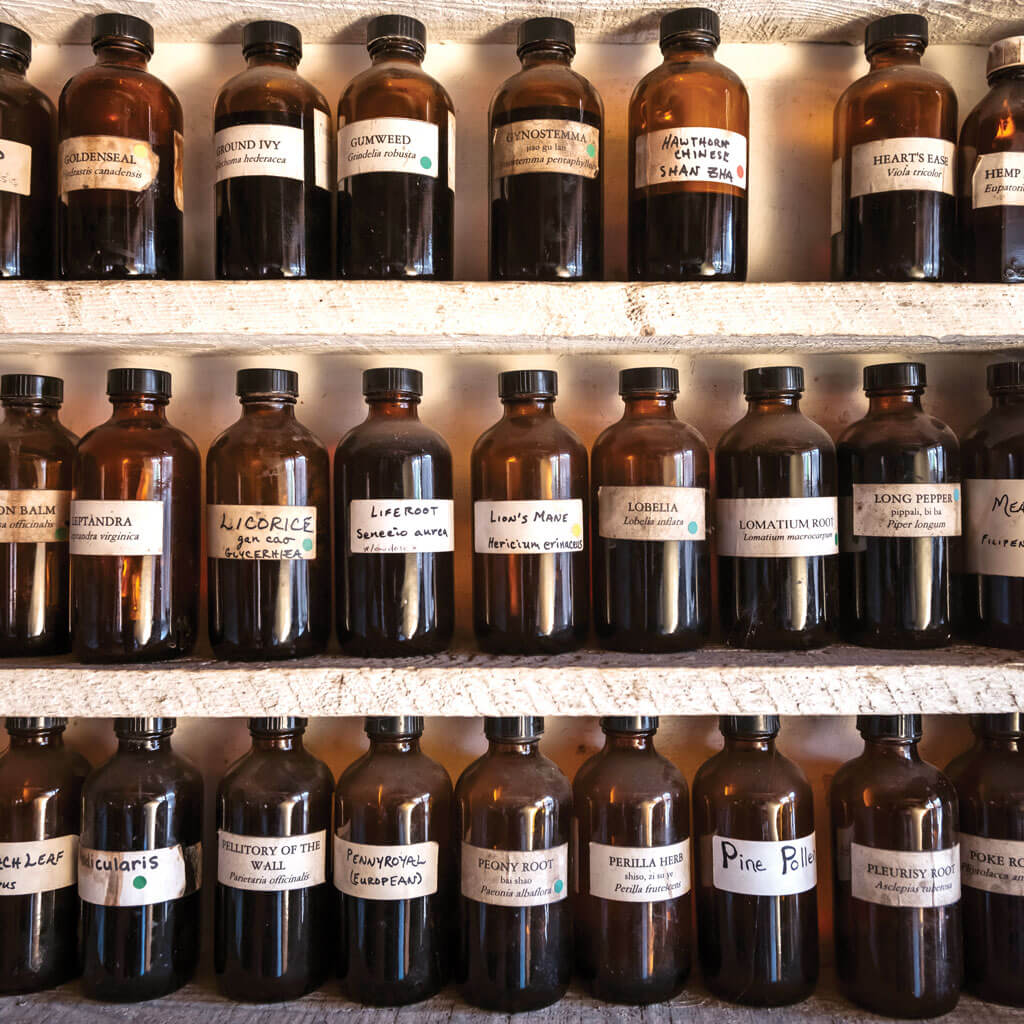 Hollis and his apprentices fill rows of amber bottles with herbal tinctures like lion’s mane, gumweed, and stoneroot. Hollis teaches people how to use medicinal plants in a multifaceted fashion — to heal, to eat, and to learn. photograph by Jack Sorokin

Hollis’s apprentices come from places as diverse as his plants. Asensio arrived at Mountain Gardens from Atlanta via the Sacred Valley of Peru, where she’d been teaching English as a second language. It was there, in South America, that she heard about Hollis through an online course hosted by the University of North Carolina at Chapel Hill.

When Asensio’s mother visited from her home in Atlanta, Asensio took her on a garden walk like the ones Hollis gives to visitors. Hostas were the only plants that her mother could identify without help. “You should have seen the look on her face when I told her she could eat them!” Asensio says.

It’s the end of the traditional apprentice season, which corresponds with the warmer months of the year, but Asensio is thinking of extending her tenure. “This garden has shifted my perception of things,” she says. “Medicine doesn’t have to be something that you buy in a store; it’s a gift from nature that you learn to cultivate.”