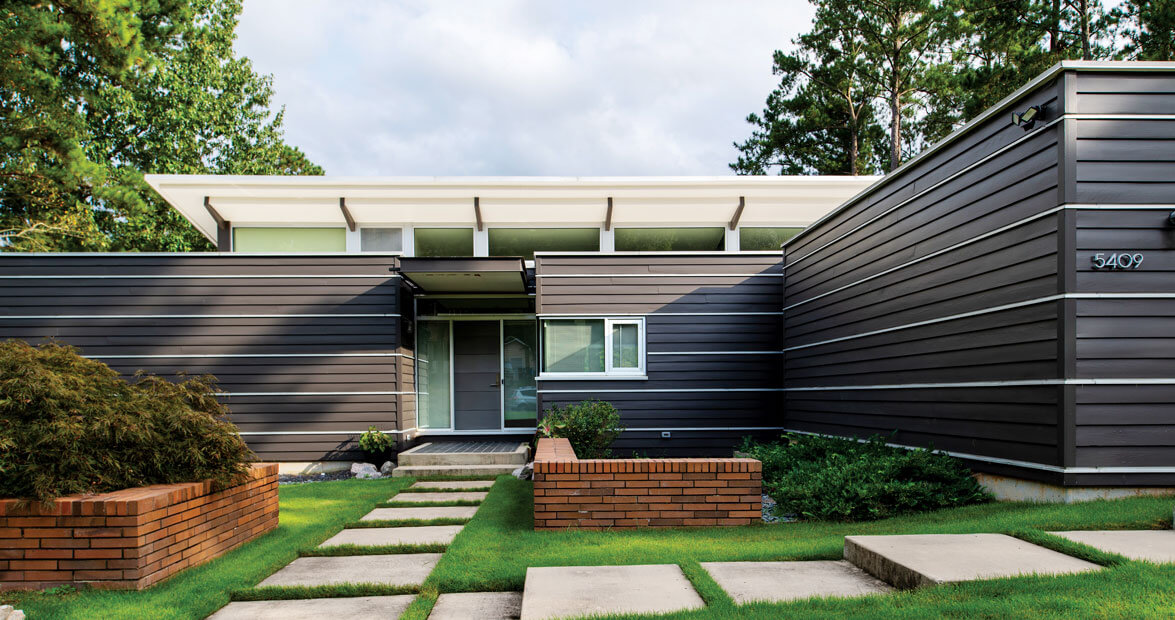 This was George’s plan all along, Bob Langford realized as his longtime friend slowed the car to a crawl and craned his neck to get a better look at the futuristic house outside the window. George Smart shifted into park. It wasn’t unusual for the two to ride around Raleigh, hunting for modernist homes — but until that moment, their tours had just been drive-bys. “He said, ‘Let’s go ask if we can see the inside,’” Langford remembers his friend saying just before he hopped out of the car and strode up to the front door. “And I followed him up there!”

That was more than a decade ago. Smart, aka “Mr. Modernism,” had just typed out a list of every modernist home he could think of in Raleigh — a list that would soon morph into the websites NCmodernist.org and, later, USmodernist.org, the world’s largest digital archive of modernist architecture. Today, more than 16,000 people have joined Smart’s now-official modernism bus tours, which extend to the far edges of North Carolina, across the United States, and overseas. His US Modernist Radio podcasts make modernism accessible to anybody with a few minutes to tune in. And when audiences across the country invite him to present his “Accidental Archivist” talk or “Mayberry Modernism” spiel, he’s happy to oblige.

As the executive director of the Modernist Archive, Inc., a nonprofit, Smart isn’t an architect, but he can tell you the story of every one of North Carolina’s 2,100 modernist homes. And he’s on a mission to save them.

Modernist houses tend to share four features: a funky geometry, an open floor plan (think The Brady Bunch), abundant windows that invite the outdoors in, and a low-pitched or flat roof. Most people don’t label these houses as “modernist,” Smart is quick to add. “They know them as ‘that cool house,’ or — if you don’t like it — ‘that strange house.’ But if you can get someone who dislikes modernist architecture to go inside of one of these houses, they start to understand the vibe, and they start to like it.”

The son of a Raleigh architect, Smart never felt a strong desire to live in a modernist home until he visited Fallingwater, the iconic Frank Lloyd Wright-designed masterpiece in Pennsylvania. There, surrounded by light and trees, Smart developed a crush that would turn into an obsession. “I knew then that I wanted to have a modernist home,” he says. 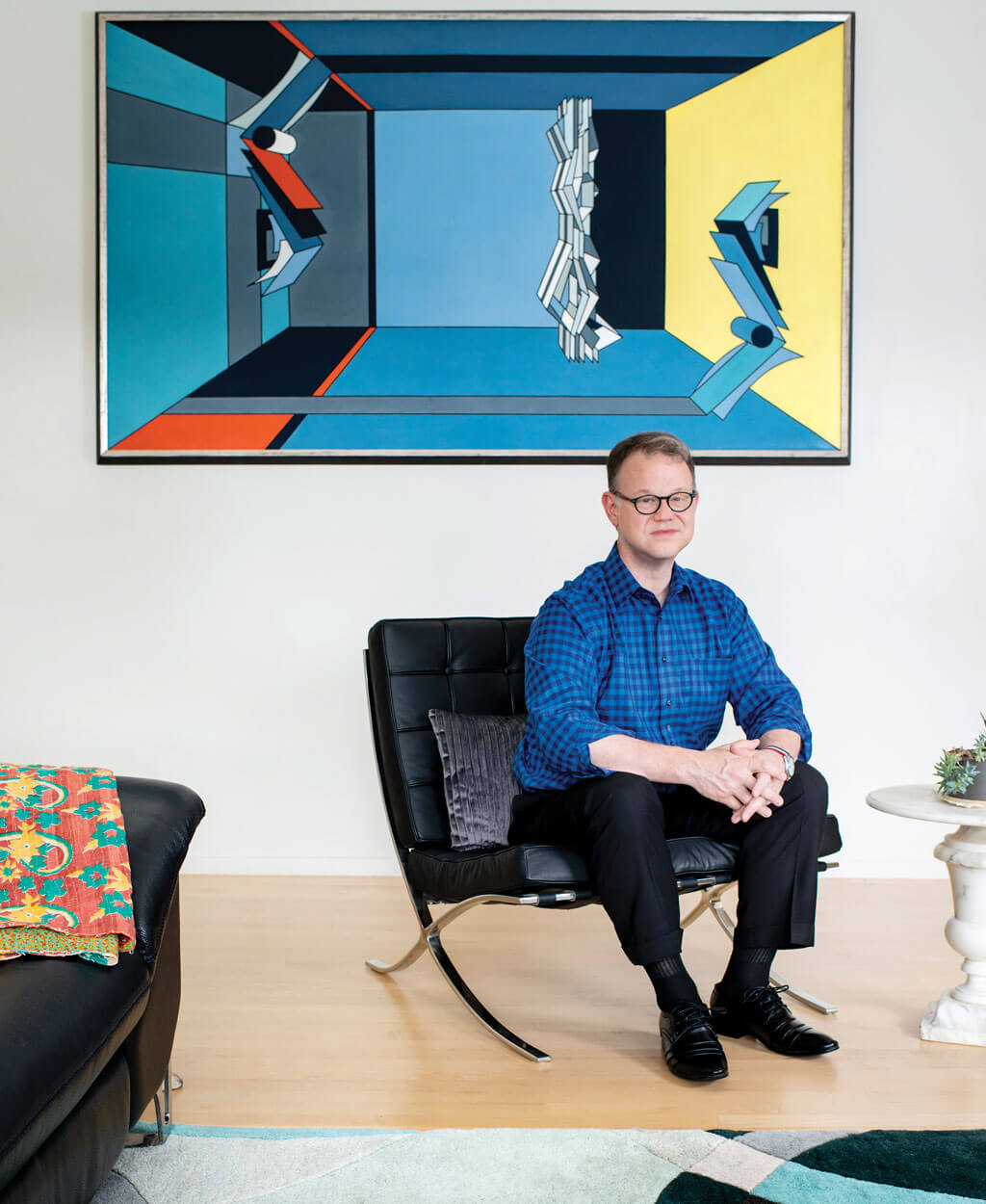 George Smart’s modernist home is such a design outlier in his neighborhood that his mail carrier didn’t make deliveries at first, thinking the house was a fire station. photograph by Lissa Gotwals

The day he returned home, Smart got to work measuring, cutting, and pasting a foam-board model of his own dream house. “I stayed up all night working on it, and about a year later, took it to an architect.” His 2,400-square-foot, modernist home in Durham overlooks the small, pine-shaded Parkwood Lake, visible through the floor-to-ceiling windows in the living room. Houses that invite the outside in are always crowd favorites on Smart’s modernist tours. Take Cassilhaus, a modernist masterpiece rising from the woods between Durham and Chapel Hill, designed by local architect Ellen Cassilly and her husband, Frank Konhaus. “People who are non-modernists will come in and say, ‘Wow, I wasn’t expecting it to be so warm,’” Cassilly says. “They equate modernism with cold imagery of glass, steel, and concrete.”

Good modernist design is not about austerity. “It’s about questioning everything and figuring out the most elemental solution to meet your needs,” Cassilly explains. “Maybe you won’t actually use a den and a formal living room. Modernism puts that space where you need it. It looks at what brings joy to your spirit.”

Even people who find modernist homes more strange than cool tend to appreciate how the “form follows function” mantra affects daily life. Modernist architecture got its start in the early 1900s, but it didn’t really take off for the average American until the ’50s — the same decade when thousands of homes across the country adopted central air-conditioning. That’s no coincidence, Smart says. “If you go into a 1922 house, it may have very small rooms, usually without closets. Because you had to independently heat each room, large, open spaces were seen as a luxury.”

With the advent of central air-conditioning, modernist homes with open floor plans became a real possibility for Americans taken with the idea of light-filled, airy living. Walls came down, one room flowed into the next, and new, practical design features emerged. The kitchen island is a perfect example. “Except for Thanksgiving and Christmas, most people don’t use their dining rooms,” Smart says. “So the idea was, why don’t we just bring that space into the kitchen?”

Sliding glass doors, another gift from modernism, allow for unobstructed backyard views and easy access to decks and patios. Porticos invite sunshine in winter, while protecting a home from harsh rays in summer. “Modernism was green and sustainable before those words came into our lexicon,” says Smart, who designed the wooden overhang on his back deck to serve as a sunshade on hot days. 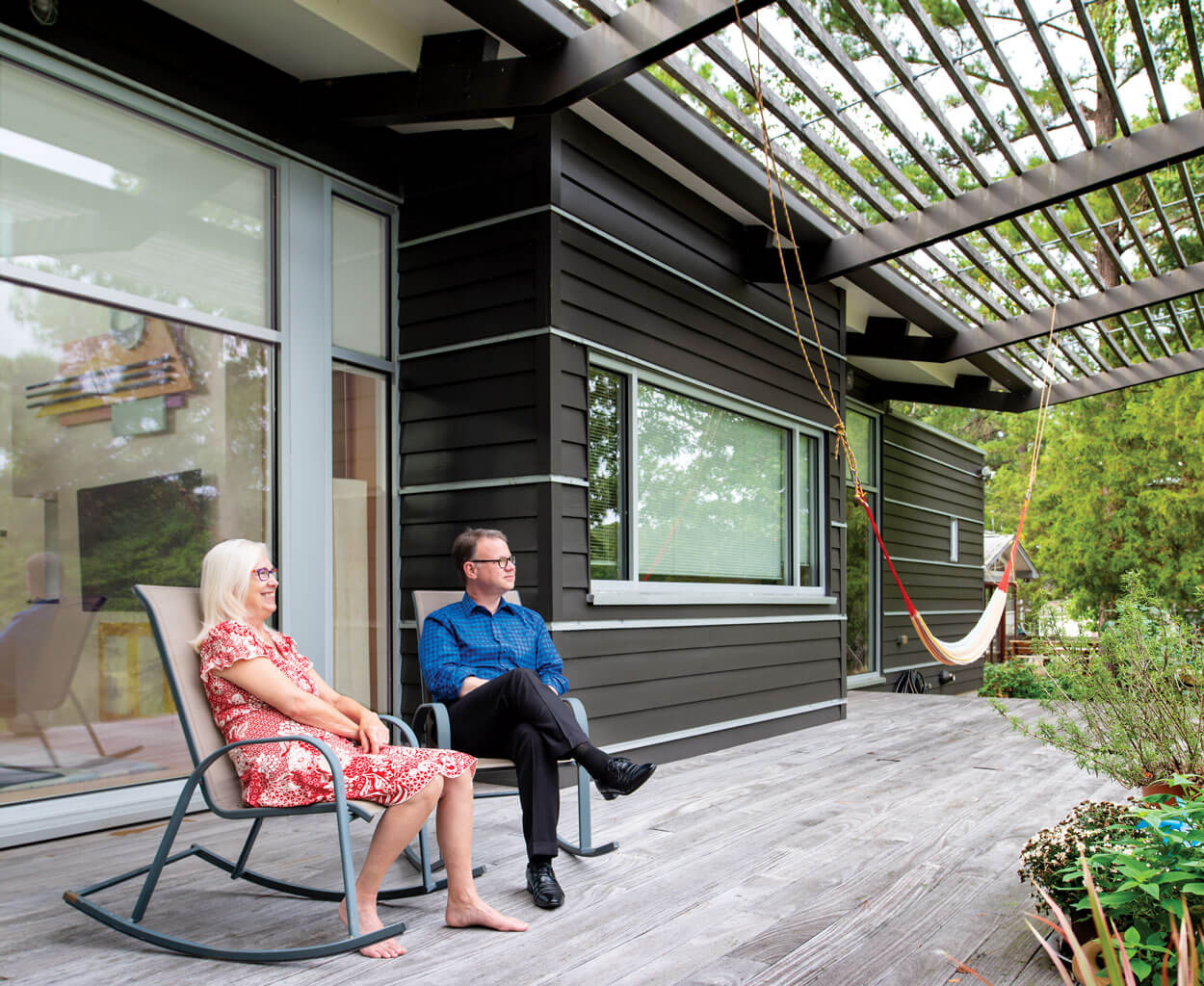 Smart and his wife, Eleanor Stell, enjoy their up-close view of Parkwood Lake, “Durham’s secret lake,” Smart says. “No one knows it’s back here!” The open kitchen and living room look out on the water. photograph by Lissa Gotwals

“You can’t save something if you don’t know where it is or why it’s important.”

Kamphoefner’s star-studded faculty included Matthew Nowicki, the architect of Raleigh’s J.S. Dorton Arena — famous for its roof supported by parabolic arches and a network of above- and below-ground suspension cables. Faculty members and students, inspired by modernist principles, designed the architectural showstoppers that now dot North Carolina’s landscape. “Each city had one or two architects who built truly great residential modern architecture,” Smart says. “Asheville had Bert King; there was Crutcher Ross in Charlotte, Dan MacMillan in Fayetteville, and Milton Small and Frank Harmon in Raleigh.”

One of Kamphoefner’s bright minds was Smart’s father and namesake, whose training eventually ignited his son’s fascination with modernism. “When I first got into this and was searching online for modernist houses, I recognized many of them,” Smart says. “It turns out, my dad had taken me to see them when I was 6 years old — the Fitzgibbon house, the Catalano house. He would go on these outings to see the best of Raleigh.”

George Smart Sr. talked about buildings constantly, his son remembers. “You know, if your dad is a banker, you just assume all dads are bankers,” Smart says. “I guess I just assumed critiquing buildings was everyday conversation.” So he didn’t find it unusual that every time he and his father went into a building, his father would wax on about the “approach,” Smart says. “Most people just walk up to a building, but architects think about introducing you to a building — almost as if it’s your great aunt from Rochester.”

Architects of that era, Smart’s father included, didn’t take on many residential projects, instead focusing on schools, offices, and government buildings. “No architect can make a real living off of houses unless you build them. And at that time, architects were prohibited from building them,” Smart says. “So these mid-century homes really were labors of love, because the architects got to do great architecture on a small scale.”

When it came time to choose a profession, Smart forged his own path, attending UNC Chapel Hill and earning an MBA from Duke University. He built a career as a business consultant, but his father’s deeply held appreciation of good architecture stayed with him: “I think my dad set a ticking time bomb in my genetics to go off decades later.” 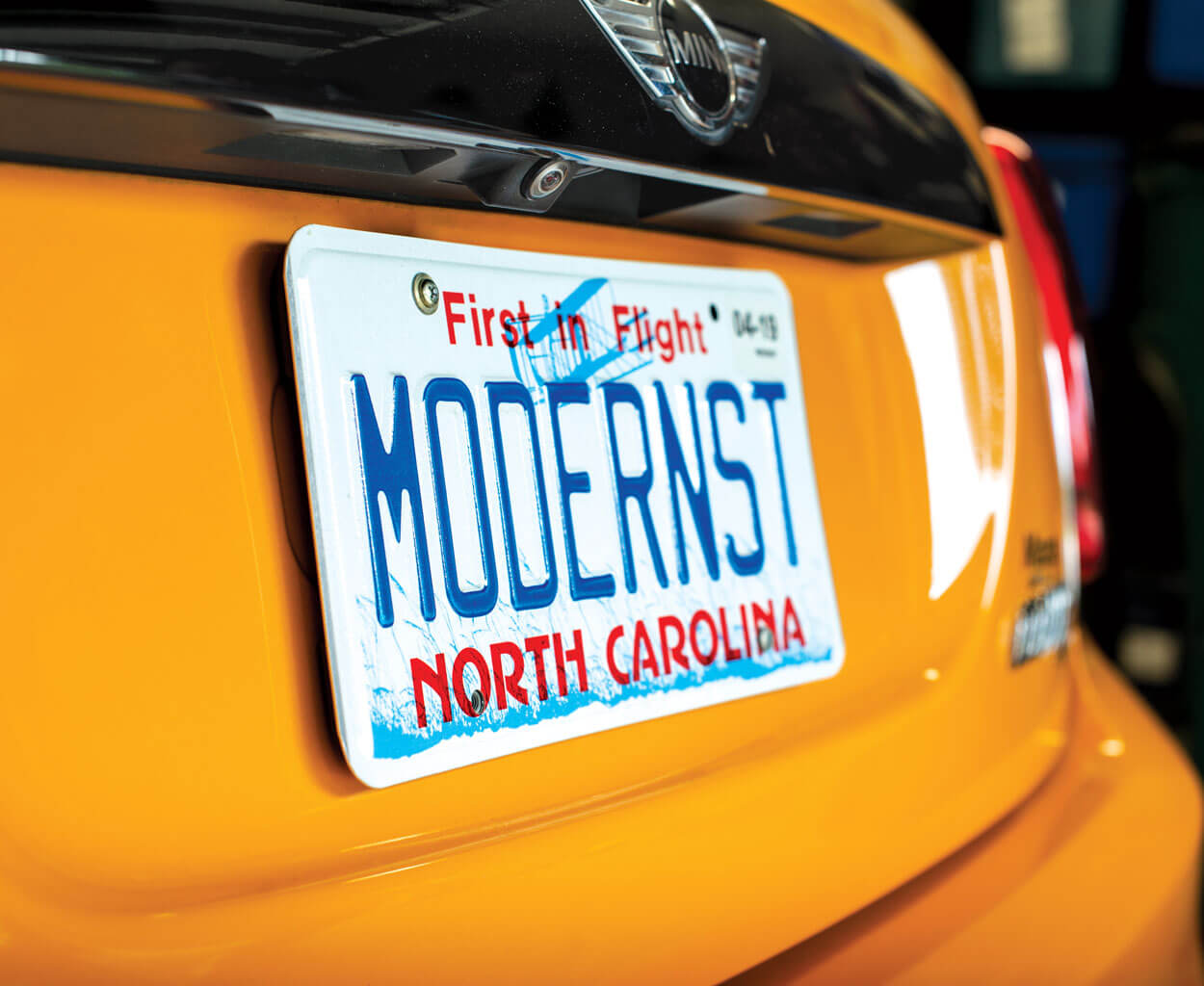 Smart scoots around the state in his Mini Cooper, searching for buildings to add to his digital archive, NCmodernist.org. photograph by Lissa Gotwals

By 1954, architects around the world knew Raleigh for two reasons: Nowicki’s Dorton Arena and the Catalano house, designed by Eduardo Catalano while he was teaching at NC State. Until it was bulldozed in 2001, the Catalano residence looked more like an oversize Pringles potato chip than a house. “Nobody had seen anything like it,” Smart says. It was the first-ever “hyperbolic paraboloid,” a 4,000-square-foot roof fashioned from a thin wooden slab supported at each end of the parabola by steel points on concrete buttresses. Between the roof and the ground was a whole lot of glass — looking at it, you got the idea that you should hold your breath to keep it all together.

“But in the end,” Smart says, “it was neglected by the owners. Preservationists waited until the 11th hour to try to rescue it, but it was destroyed. Raleigh lost its international architectural landmark — the Dorton Arena of houses.” Demolition is a fate all too common for these treasures. “To be fair to developers, they come along when no one else is paying attention to a house,” he adds. “The key is getting more people interested up front — not taking a wait-and-see attitude.”

The destruction of the Catalano house galvanized the mission for Smart’s nonprofit. Not only would its website document and promote modernist architecture; it would protect it by giving these homes a voice. “You can’t save something if you don’t know where it is or why it’s important,” he says. The nonprofit combs multiple listing services for vacated modernist homes and lists them on the website. “We want to intervene at the point when a house becomes vacant,” he explains. “Once a house is unoccupied, nobody notices when things go wrong, and then those things get worse.”

When Smart lists a new tour, his old friend and fellow architecture enthusiast Langford is one of the first to sign up. He’s proud to be along for the ride. “George has never stopped driving around, looking for modernist houses,” Langford says. In the early days of Smart’s nonprofit, most people weren’t thinking about modernist architecture, Langford adds. “Now, more people understand how lucky we are to have these buildings, and that it would be shortsighted to lose them.”