The dilapidated mansion on Boylan Avenue had long caught Sarah Kunz’s eye during her daily commutes into Raleigh’s Warehouse District. When she started dating Jeff Shepherd, she made sure that the two would stroll by it together. She wanted to gauge whether he saw in this old house what she did.

One day, they decided to take a look inside. The path to the front door was blocked by overgrown shrubs and poison ivy, so the two walked around to the rear of the house, swatting away mosquitoes. They saw vines winding their way into the structure through gaps in the window frames. Behind the house, rickety wooden stairs led to the back door. 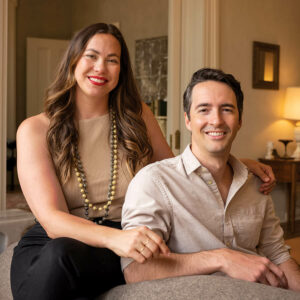 Once inside, Sarah and Jeff could see beyond the decay. The prominent architectural details, despite years of neglect, took their breath away: Fifteen-foot-high ceilings lined with crown molding. Wood-knot detailing embedded into original hardwood floors. Four fluted columns with intricate carvings that drew their eyes to the cupola some 40 feet above the foyer. There, a painted-glass dome skylight glowed, each section shaped like the petal of a flower. This grand mansion, situated on a one-acre lot, sat at the highest point in the neighborhood, with views of Boylan Bridge. As Sarah looked around at its magnificence, she recalls, “I saw the house coming to life.”

In 2021 — several years, one wedding, and lots of elbow grease later — Sarah and Jeff Shepherd opened Heights House Hotel. These days, the once-dusty old mansion features nine luxury en suite rooms, five of them original and four added on. And Sarah has since researched the house’s history. “I got very curious,” she says. “There wasn’t a lot known about it — what it was, what it used to be.”

Heights House Hotel began life as Montfort Hall, completed in 1860 on a sprawling 100 acres owned by William Montfort Boylan, son of the editor of the 19th-century Raleigh newspaper Minerva. The younger Boylan, known as Buck, had lavish tastes. He commissioned architect William Percival, who designed the home in the Italianate style, characterized by intricate columns, cupolas, decorative woodwork, and arched windows. Percival also designed Raleigh’s massive Gothic Revival-style First Baptist Church on Salisbury Street. Buck was known to host big soirees and hunting parties on the grounds of Montfort Hall. Then, in the early 1900s, not long after Buck’s death, the Greater Raleigh Land Company purchased the property and subdivided it into one of the city’s earliest suburbs, Boylan Heights. 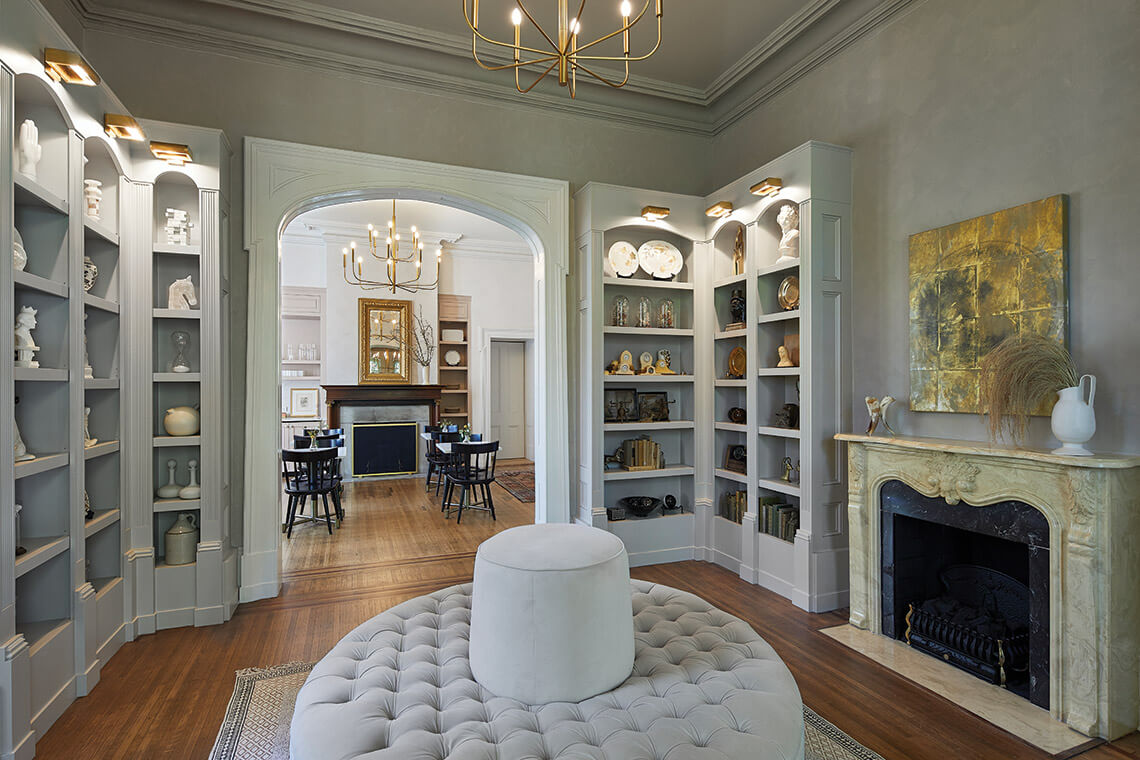 Innkeepers Sarah and Jeff Shepherd filled the Heights House library with books and artwork, some by local artists. Here, visitors can relax, read, and admire the surroundings from a round settee in the middle of the room. photograph by MONICA SLANEY/PHOTOGRAPHIE_FOURSEVEN

Over the next 50 years, the house was bought and sold several times. In the 1950s, it even served for a period as Boylan Heights Baptist Church. Incongruous additions were made to the mansion over the decades as the neighborhood fell out of favor, and by 1978, when John and Margarette Jadwick bought the place, it was hardly recognizable. The Jadwicks made some renovations to the house, but the property eventually fell back into disrepair. And that was its condition on that fateful day when Sarah and Jeff stepped through its doors. They were determined to make things right again.

During their walks together, the couple often found themselves visiting Holder Goods & Crafts on West South Street. When they began making plans to purchase and restore the house, they asked the shop’s owner at the time, Bryan Costello, an interiors and art director, if he’d like to join them. Costello was intrigued. “It was known as the ‘house on the hill,’” he says of the old mansion. “It had this kind of mystery. We’d ride by it all the time. It’s like nothing else in the neighborhood.”

As he began his work on the house, Costello was mindful of how its original components would interact with new ones. “I had this look that I’d established already in my shop that was textural, atmospheric, and romantic — all the things that make a small hotel great,” he says.

The renovation team stripped bare the layers of paint on the front doors, leaving a shadow of the original color and honoring the weathered look of the entrance. Throughout the hotel, two themes play out in Costello’s design theory. He was able to blend time by using different shapes and textures from various decades: Curves in arches, mirrors, and niches combine with newer, softer materials in solid colors. “You’re almost completely free to blend all this modern with the old,” he says, “because your continuity is found in the architecture of the house.”

Costello flipped the traditional theory of applying dark colors in large rooms and light colors in tight spaces. To create an atmosphere of openness and intimacy, the drawing room and the dining room are light and bright while the slightly smaller library and parlor are darker and richer in color. “In Heights House, the smaller the space, the darker the color,” he says. “It’s a pretty cool thing to see as you move through the house. It gives you the sense of compression and expansion.”

On the way to breakfast one recent morning, a guest looks up at the hotel’s eight-foot-tall 1920s French chandelier. Her hand glides along the smooth wooden banister as she makes her way down the stairs. She lingers in the library, and a horse sculpture, one of many objects found on the wall-to-wall bookcases, catches her eye. Behind the statue, a book called Worth and Wealth, published in the era when the house was built, stands out, perhaps acknowledging the home’s original owner. 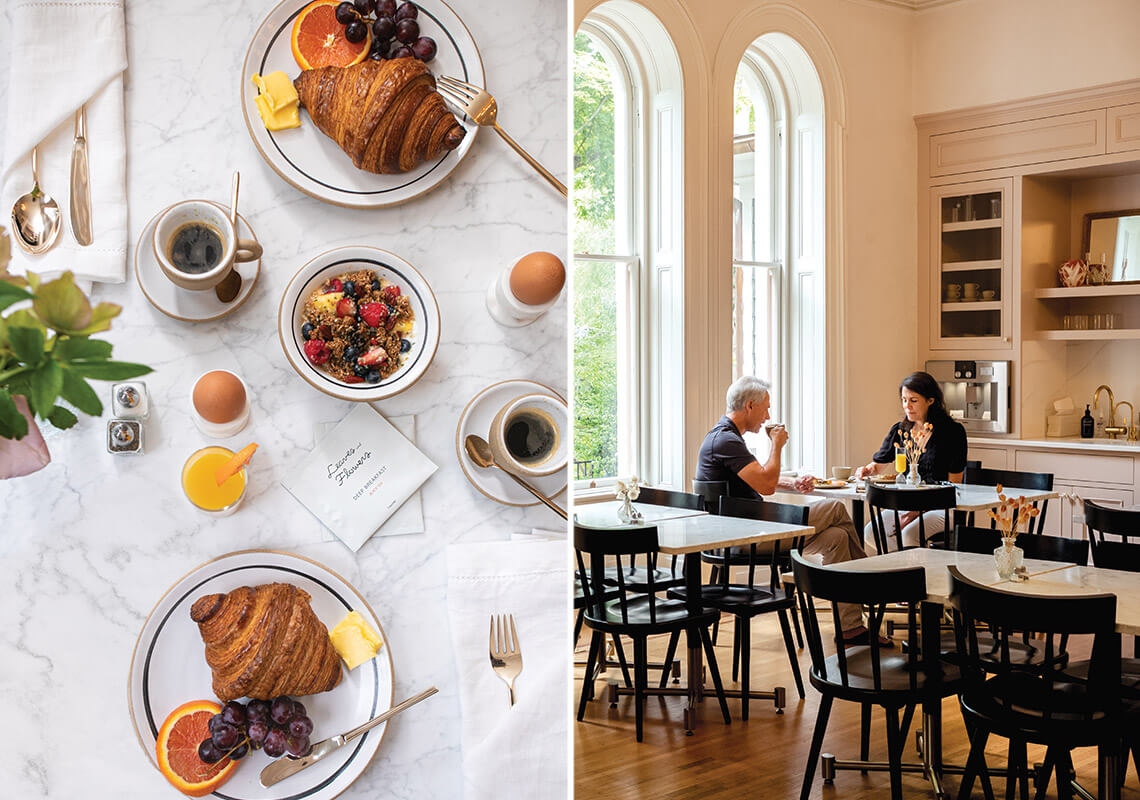 Many of the breakfast items that the Shepherds offer in the Heights House dining room come from local businesses — like croissants from Boulted Bread in Raleigh and coffee from Counter Culture in Durham. photograph by JENNIFER COLE RODRIGUEZ, CHARLES HARRIS

Morning light pours in through the arched windows in the dining room. Other guests quietly gather for breakfast, laid out on a sideboard for self-service. A Salvador Dalí lithograph hangs above the spread of fresh fruit and yogurt. The pastries come from Boulted Bread, a nod to Sarah and Jeff’s earlier courtship, when they’d stop by the bakery on their walks through the neighborhood. Before long, guests settle in, and conversations about the day ahead begin.

This is one of Sarah’s favorite times of day. “I feel calmness and pride when I see people gathering and enjoying a space that I poured so much love and energy into,” she says. “It’s very special to see.”