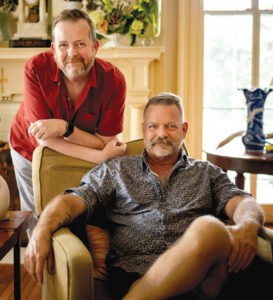 Richard Smoot makes no bones about his role at Elmwood 1820, a luxury B&B in Washington: “I’m Carson, Mrs. Hughes, and Mrs. Patmore all rolled up in one,” he says, referring to the butler, housekeeper, and cook characters in Downton Abbey. Instead of an English estate, however, he and his husband, John Butler, are the innkeepers at a grand blue-and-white antebellum mansion with a wraparound porch and a fairy-tale-worthy spiral staircase that spans three floors.

In 2012, John and Richard were visiting family in Colerain for Christmas. They took a drive — “I was desperate for cell service,” Richard says — and wound up in Washington, where a “for sale” sign on the home caught their attention. They lived near the other Washington at the time, working in PR/marketing and architecture/project management, respectively. On another visit two years later, the sign was still there. The pair had stayed extensively in B&Bs, and for Richard, who’d worked in the hospitality industry as a young man, it was both an omen and a beacon. “We had two teenagers, my grandmother, and my mother living with us — I was already running a B&B!” he jokes. In 2015, they bought Elmwood 1820 and spent the next year preparing it for occupancy. 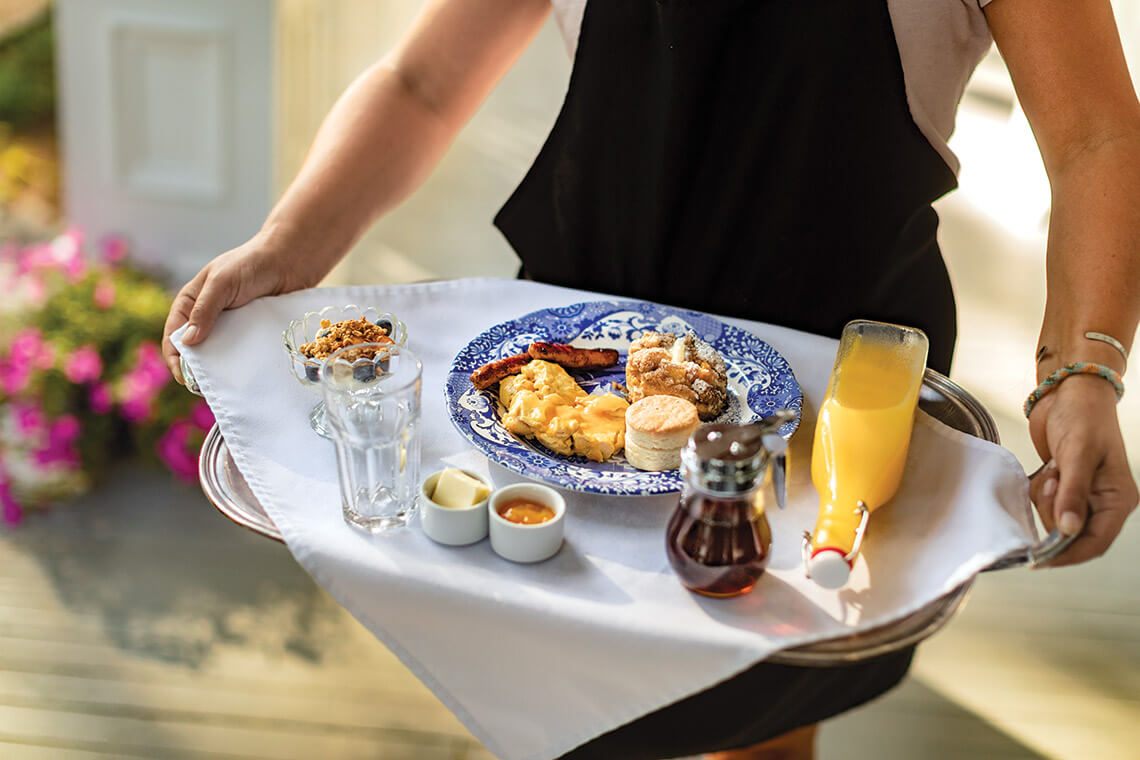 And not just any occupancy, but for guests who appreciate high-quality linens, complimentary champagne and cocktails, bathrobes and luxurious Molton Brown toiletries, and baskets of international snacks in each of the five rooms — christened The Painter, The Gardener, The Explorer, The Writer, and The Romantic. “We discussed the kind of guests we thought would be visiting,” Richard explains, “and came up with those.” Each room is decorated with art, books, and even furniture relating to its specific theme.

A couple from Colorado who’ve moved to New Bern and are using Elmwood 1820 as a base for exploring the area gather their things. Another duo wanders by — perhaps they belong to the car with the Idaho license plate. “Every single one of our visitors is awesome,” Richard says, from the Swedish family that was touring the East Coast and “just showed up” to the folks “coming from as far as Chocowinity, a whole three miles away.”

Elmwood has had nearly a dozen owners since it was built in 1820 (“1820-ish,” Richard amends). The Grist family, residents from 1855 to 1907, completed the second floor and added a third floor, a wraparound porch, and an Italianate facade to what was originally a Federal-style residence. “It’s not a pure example of anything,” Richard says. As with many mansions in the Southeast, it was used as a hospital and garrison headquarters for Union soldiers during the Civil War. “They didn’t ruin anything in the house, but I think they accidentally burned half the town down,” Richard says wryly.

Today’s decor reflects Richard’s and John’s passions and personalities, an eclectic mix of classic, chic, antique, and funky — from the baby grand piano in the bar to a tower of LED cubes that glow colorfully when darkness falls. Here’s a live-edge wooden coffee table, a basket of hats for sunny strolls, and a sizable collection of African, Asian, and South American art amassed by John and Richard, who visited 51 countries during Richard’s career with the U.S. State Department.

The dining room, with its commanding chandelier and 100-year-old hand-blocked wallpaper, is where the second “B” in B&B can be found. “Breakfast is the best meal, and I take it very seriously,” Richard says. Today’s features lemony-yellow scrambled eggs beside a French toast casserole — both airy as a soufflé — smothered in homemade strawberry compote, and served with petite biscuits that are square rather than round since Richard sometimes uses the same cutter to make shortbread for occasional afternoon teas. Don’t feel like getting out of that fluffy bathrobe? Have breakfast or coffee and tea delivered to your room, or opt to dine on the magnificent front porch overlooking a pair of fountains that provide a steady, soothing backdrop.

Or take a mug and stretch out on the velveteen sectional with a coffee table book on Giotto. After all, the best aspect of the perfect B&B is to just, well, be.