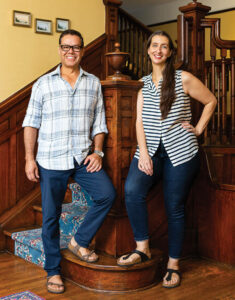 Positioned atop Chestnut Hill, a 10-minute stroll north from the clamor of downtown Asheville, the Chestnut Street Inn is as stately as the namesake historic district in which the graceful old brick home sits. Emilie Kapp pours a glass of wine and kicks back in a rocking chair on the wide front porch of the 1905 bed and breakfast that she owns with her husband, Arturo Leal.

This land was developed into one of Asheville’s earliest neighborhoods during the city’s growth spurt in the 1890s. Around the same time that George Vanderbilt was constructing his grand estate, doctors, lawyers, and other prominent citizens were filling Chestnut Hills with sizable homes in the Craftsman, Queen Anne, and Colonial Revival styles. Even the mature trees and some stretches of brick sidewalks, many of them more than a century old, lend that same sense of dignity to the area.

The Chestnut Street Inn — originally built in the Colonial Revival style by author Thomas Wolfe’s uncle for lawyer William R. Whitson — features architectural flourishes, some of the original fireplaces and light fixtures, and some of the neighborhood’s finest interior woodwork in handsome tiger’s-eye oak. It’s speculated that Biltmore craftsmen may have worked on the home, as evidenced by the carved acorns — a Vanderbilt motif — on the stairway newel posts. “This house is the ringleader of these gorgeous old homes,” Kapp says.

It wasn’t the neighborhood’s charm that lured the New York City transplants to western North Carolina in 2014. A Boston native who grew up in Florida, Kapp had spent many summers at a camp in nearby Brevard and had always loved the area. The couple, both sommeliers who helped open New York City’s first natural wine bar, hoped to do the same when they moved to Asheville. They soon realized, though, that the city wasn’t ready for natural wines, which are made using traditional methods and without the use of chemicals or additives. “It was all beer by the glass at that time,” Kapp says.

Instead, she and Leal waited tables and made jams, salsa, candy, and other food products, which they sold at tailgate markets. Even though Kapp makes excellent baked goods and Leal specializes in the flavorful condiments of Puebla, Mexico, where he’s from, the food biz also proved not so lucrative. 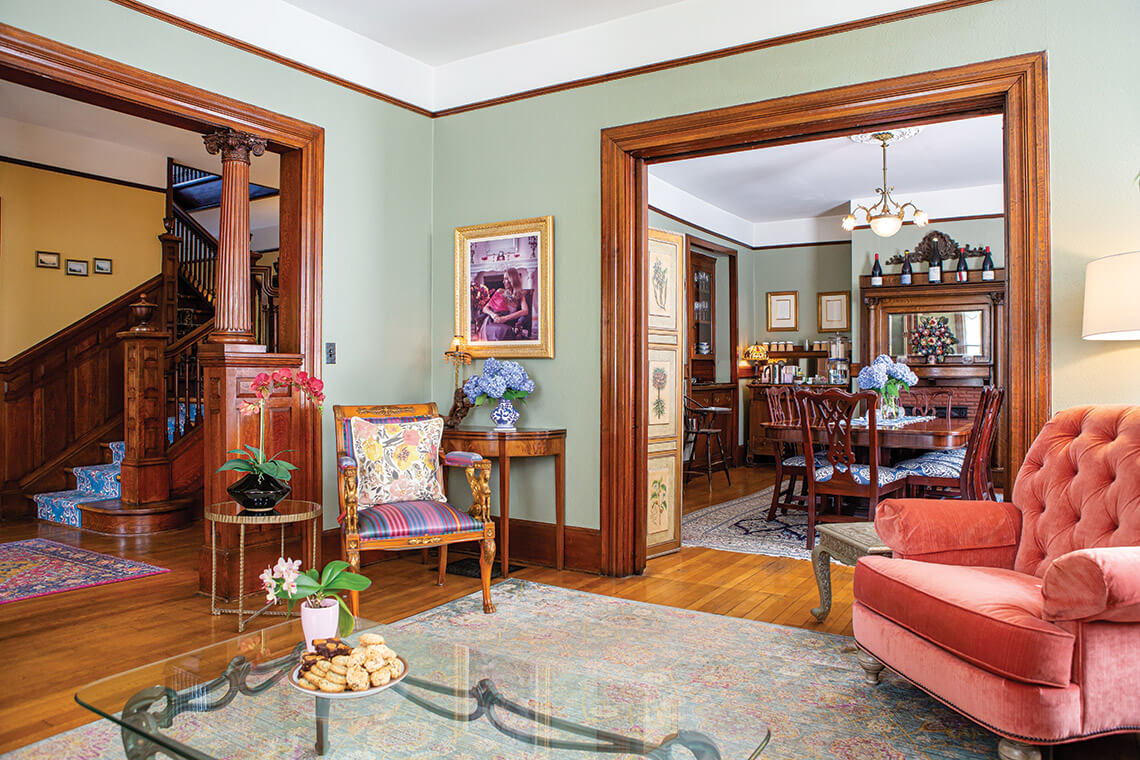 While eating, take in the inn’s interior features, including the closed-stringer stairway and raised-panel wainscoting. photograph by Tim Robison 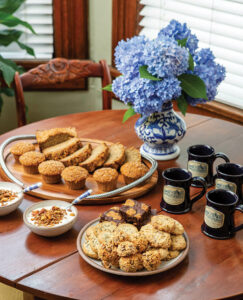 “We were at a fork in our lives,” Kapp says. Returning to New York was an option, as they had offers to serve as sommeliers at several restaurants there, as well as an opportunity to buy the natural wine shop that they’d helped open. But Asheville offered the quality of life they desired.

Kapp made a list of all the goals she’d hoped to accomplish in life, and she was surprised to see one that hadn’t crossed her mind in years: operating a bed and breakfast. It had been a dream when she was 18. Though not financially viable at the time, she’d gone so far as to write out a business plan that included a café and a beer fridge on the honor system. Years later, in New York City, she’d operated her shoebox-size apartment as an Airbnb and took it so seriously that she even included a pretty impressive continental breakfast.

When the couple took over the inn in 2015, Kapp told Leal: “Listen, it’s just like restaurants, but it’s literally every hour of every day.” Now, looking back, Leal laughs. “We had no idea what we were doing,” he says, opening a neatly wrapped package of potato-chip-and-pecan shortbread cookies, which Kapp bakes and sets out every afternoon for guests.

The couple may have been green when they took the plunge to become innkeepers, but with their backgrounds in hospitality, their love of meeting new people, and their appreciation for history, they were naturals. Over their seven years of inn ownership, Kapp and Leal have slowly updated all eight guest rooms with modern comforts while keeping the decor elegant and sophisticated.

In 2020, their efforts earned them inclusion on the Select Registry, a standard of refinement that only 21 North Carolina accommodations have attained. “No dust and doilies here,” Kapp says, noting that clearing out dusty fake greenery and tacky tchotchkes was the first thing they did; she believes that Chestnut Street had been operating as an inn since the ’80s. They’ve even dug up more historical details about the house, the most fascinating of which is the fact that it served as a birthing center for unwed mothers through the 1950s and ’60s. “It’s amazing to think how many babies may have been born here,” she says. 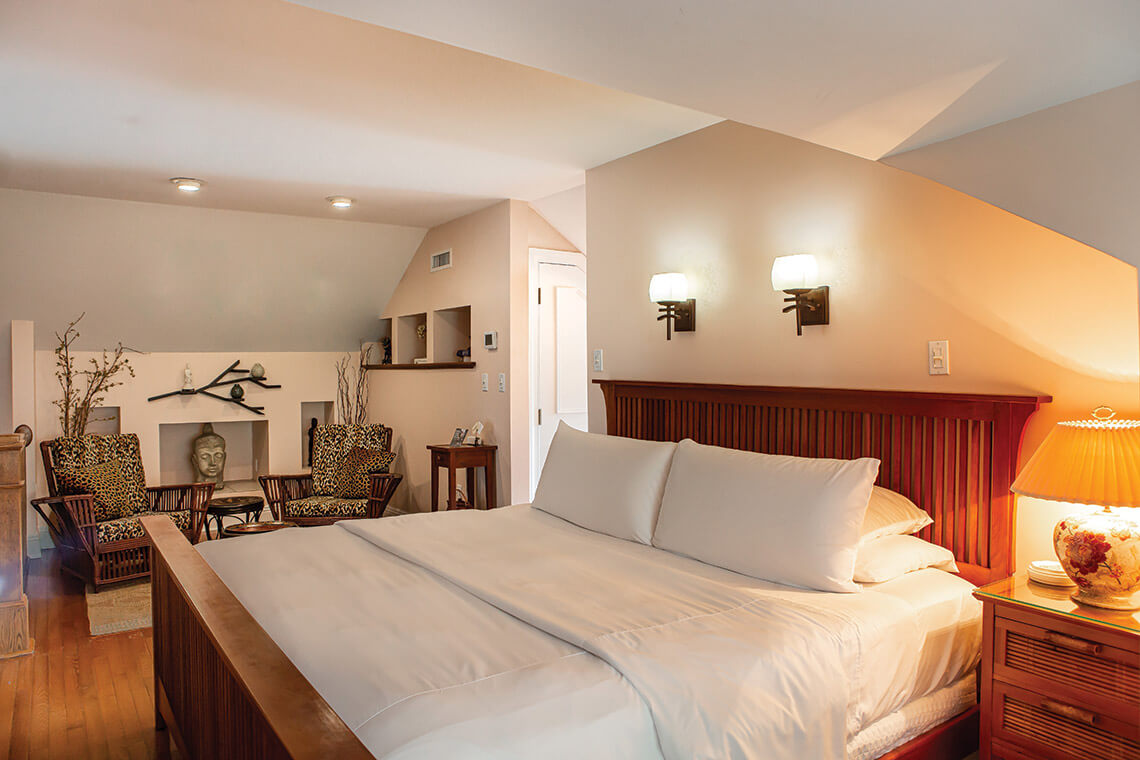 As Kapp walks through the house, providing the rundown that she gives to all guests, she points out the local coffee and tea, port wine and beer, and ice cream in the fridge — all accessible at any time. Breakfast service is evolving — as Covid-conscious business owners, the couple hopes to return to some type of seated breakfast in the fall. They also hope to offer natural wine tastings and Leal’s popular margarita and salsa-making class later in the year.

It’s obvious that making sure guests enjoy their stay is paramount to Kapp and Leal, but the exchange isn’t one-sided. Kapp says that meeting people and learning about their lives fills their souls. “When you’re hosting people in your home, it becomes so personal,” she says. “I can’t count the guests who are now on our Christmas card list or who check in on us and have sent us baby gifts. It has allowed us to build relationships that I hope we’ll have for the rest of our lives.”