What happens when a streetside sign in a popular North Carolina mountain town features a giant salamander with a distinctive name? “Fun!” says Abby Carson, general manager of Hellbender Bed & Beverage in downtown Blowing Rock. “People will say, ‘Hellbender? Is it a biker bar?’ Or they’ll come in and ask, ‘What’s a hellbender?’ Or they’ll say, ‘I love hellbenders — I saw one 20 years ago!’ ”

Carson pauses and smiles. “We get a lot of good stories,” she says.

Take the one from local resident Brian Baldwin, who was rock-hopping at the nearby Upper Boone Fork creek with his brother several years ago when they spotted what Baldwin insists was a hellbender. The brothers had scrambled off-trail to reach a swimming hole when a splash got their attention. 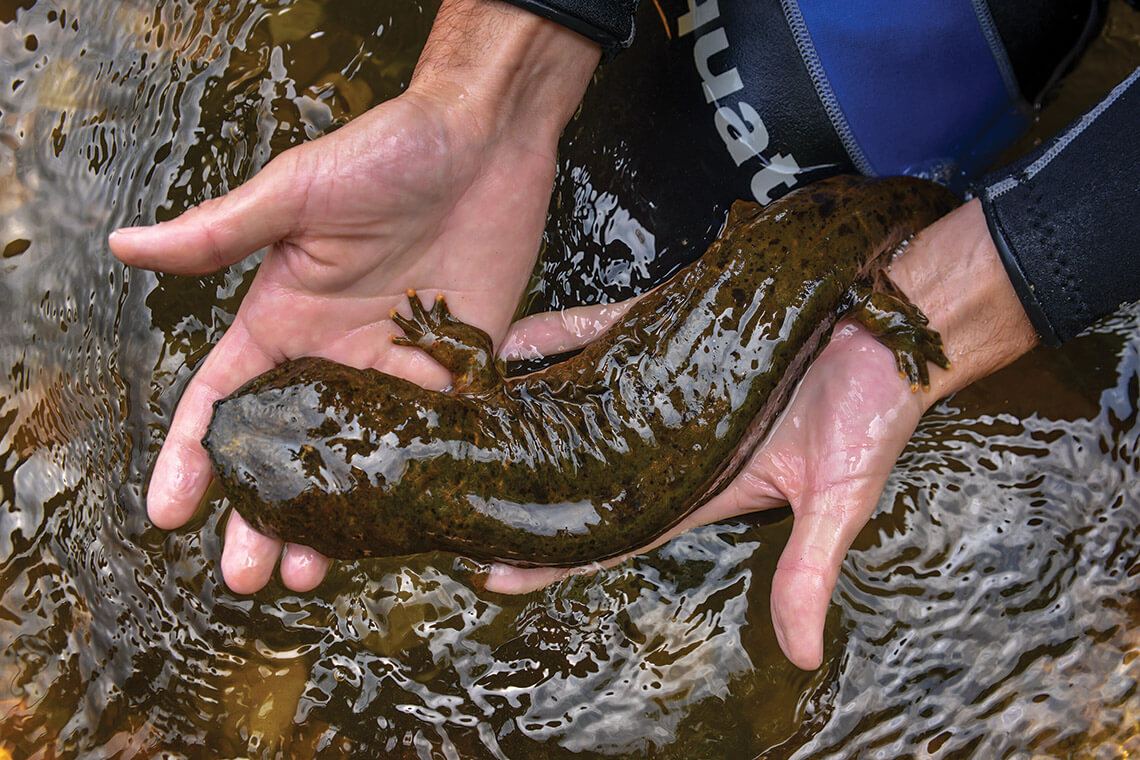 “It was so striking,” says Baldwin, who manages Footsloggers, an outdoor outfitter just around the corner from Hellbender B&B. “My brother was like, ‘Did you see that?’ It was brick-colored, about as big around as my arm. This was not a fish — it had a tail. It was almost two feet long, like a giant lizard!”

Carson delights in hearing her guests at Hellbender tell such big fish — or, rather, big ’bender — stories. The B&B has a long history of serving as a gathering spot where both locals and visitors can relax, drink a few beers, and swap adventure yarns. Much like real hellbenders, which have evolved little over the past 150 million years, Hellbender B&B has stayed true to the century-old tradition of hospitality within its walls.

The building that this decidedly modern B&B occupies turns 101 this year, says Carson, who’s sitting at a corner table amid decor that complements the inn’s rich history — lots of hewn wood, metalwork, and warm lighting. By the 1940s, it was the Sunshine Inn, with bright yellow paint. During that period, the front porch had rocking chairs, and the inn was known for serving hearty breakfasts and comfort foods like fried chicken; an overnight stay back then would set guests back $2.50.

More recently, from 1994 to 2013, the place was occupied by Crippen’s Country Inn and Restaurant, widely acclaimed for its fine-dining dishes and owner Jimmy Crippen’s Got to Be NC Competition Dining Series. It became Hellbender in 2020, when the Milner family, who owns the property, recruited Carson — a local who grew up on a Christmas tree farm and attended high school with their son — to oversee a new kind of B&B. 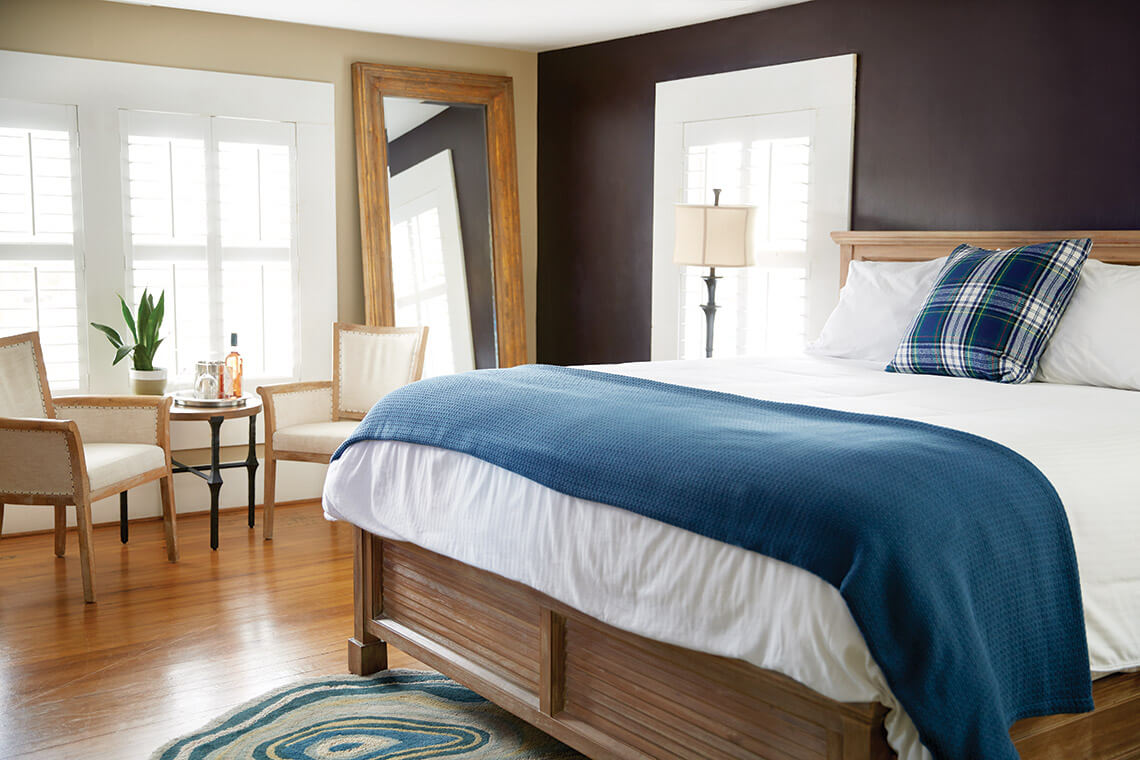 This suite comes with a king-size bed, smart TV, highspeed Wi-Fi, and a deluxe bath with a tub and walk-in shower — oh, and also a hammock because … why not? photograph by Stacey Van Berkel

So why call Hellbender a bed and beverage instead of the more common bed and breakfast? “That was our idea for a fun twist on the traditional,” Carson says, explaining that the owners wanted to avoid getting locked into serving full breakfasts, instead allowing for creative cocktails, wine and beer, and more modern food offerings.

Hellbender has a youthful feel: a lean, dynamic menu that features breakfast smoothies and scrumptious, flaky biscuits. Those are perfect to grab and savor on the way out to hike areas like the Glen Burney Trail off Laurel Lane, which is within walking distance of the inn. Lunch and dinner consist of unfussy crowd-pleasers: hamburgers, a fried chicken sandwich, and mac ’n’ cheese for those on afternoon jaunts around the downtown area’s boutiques, souvenir shops, art galleries, and museums. At night, the menu of craft cocktails and beers gets a chance to shine on Hellbender’s softly lit patio or inside its rustic, romantic bar. 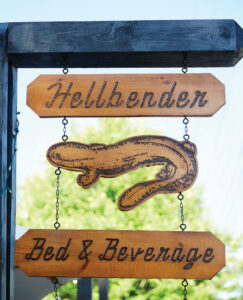 The B&B’s full-service restaurant and bar are located on the ground level. Overnight accommodations are upstairs, where guests can choose from eight family-friendly rooms (five of which are also pet-friendly), with king beds, private bathrooms, and tasteful, modern decor and colors that subtly reflect this laid-back mountain town’s surroundings. One room even has a hammock for lounging, hung in a sunny alcove overlooking the patio.

Guests have told Carson stories about how they’ve stopped by 239 Sunset Drive every summer just to check it out. Some have gotten engaged on the patio. One man said that his grandparents owned the inn many years ago, and he pointed to the window that he and a cousin would use to slip out at night and play on the roof.

Nighttime is when both the B&B and its namesake prehistoric creatures come alive, Carson says. She notes that the name was not just an attempt to get “a really cute logo” on the sign — it was also chosen to bring attention to this beleaguered local salamander. North Carolina’s hellbenders are not on the endangered species list anymore, Carson says, “but they’re right on the edge.”

Back inside Hellbender, the restaurant is in a lull after the lunch rush. Customers have cleared out, and a few staffers are gathered in the dining room, comparing hellbender experiences. Everyone, it seems, knows someone who’s seen one — but there are few firsthand sightings. Although Baldwin says that he can’t be entirely sure of what he saw during that long-ago hike with his brother, he knows what it wasn’t: “It’s easy to say that it could have been a lot of things,” he says, hedging. “But this was not a fish or a mammal — and it was huge!” 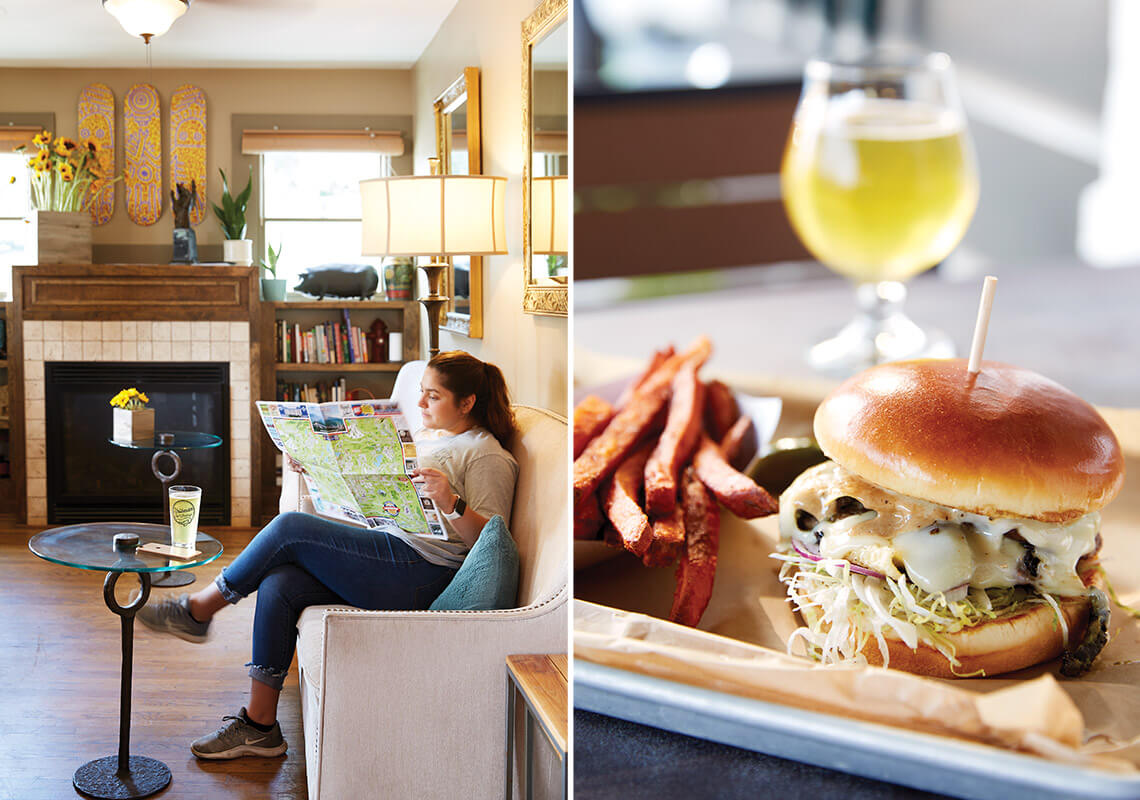 Hellbender’s eclectic and cozy sitting area is just right for checking out a map of the Blowing Rock area — or for enjoying a glass of wine and a mushroom Swiss burger with shredded lettuce, red onion, and black garlic aioli. photograph by Stacey Van Berkel

Despite growing up in nearby Boone and having a deep familiarity with the Watauga River, Carson says that she’s never seen a hellbender herself. But two years into running the B&B, she feels like she has. “I’ve had so many locals tell me about this one hellbender that has several hooks in it from catch-and-release,” she says. “I can’t remember the exact spot on the Watauga, but people have said, ‘Yeah, I saw one last year when I was fishing. He had four hooks in his mouth!’ So it has to be the same one.”

She likes that image: a resilient salamander hellbent on survival, its mouth studded with hooks, leaving adventurers with a good story to tell — to new friends over beers at Hellbender.