The lilies, petunias, hydrangeas, and canoe plants that grow outside the Pecan Tree Inn are not just for guests to enjoy. Locals and tourists alike in this 300-year-old historic port town are invited, quite literally, to stop and smell the roses.

Welcoming passersby are Colorado transplants Stan and Christine Lamb, who had never set foot in Beaufort until 2015. That’s when the first-time innkeepers became the third owners of the largest boutique B&B in North Carolina’s fourth-oldest town. “We fell in love with Beaufort in one day,” Stan says. “There’s not another town like it anywhere.” 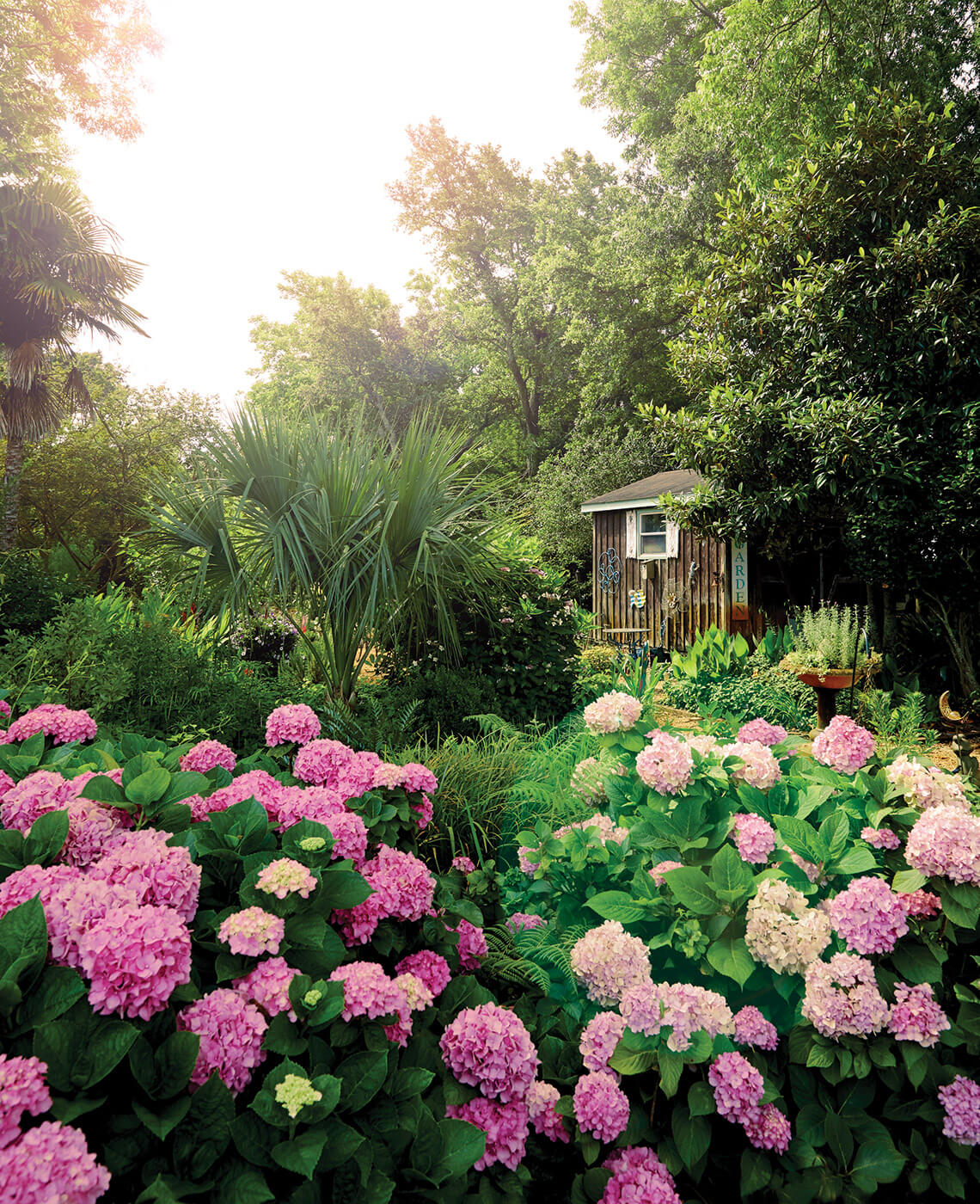 The Lambs’ Beaufort B&B is a garden oasis for both guests and passersby, who often take time to stop and smell the hydrangeas. photograph by Chris Rogers

What’s not to love? The former fishing village, which routinely lands on “best small town in America” lists for its quaint waterfront and neighborly vibe, lures visitors who come to explore everything from boating and biking to maritime history and wildlife conservation. Guests of the Pecan Tree Inn can explore the waterfront, half a block away, or visit popular restaurants — Beaufort Grocery Co. is right outside the front door — without ever having to get into a car. Or they can use the inn as the starting point for a tour of the Carteret County area.

“We tell people, ‘You probably need three days,’” Christine says. “Here, you can kayak, visit the islands, the museums, the aquarium at Pine Knoll Shores. Besides Beaufort, you can go Down East, go horseback riding on the beach. There’s so much to do.”

The Lambs had no intention of moving east when they decided, a year into their marriage, to leave their corporate jobs and become the owners of a B&B. Christine, a former caterer and California real estate manager, and Stan, a Marine and a 30-year FedEx veteran, were hoping to find something near the water somewhere between Seattle and San Francisco — far from the heat and humidity of North Carolina. But they warmed to the Old North State when they saw this Queen Anne on Queen Street, with bracketed bay windows, a widow’s walk, and an elaborate wraparound porch. The grand two-story is one of Beaufort’s crown jewels, believed to be the first house in town to have electricity, indoor plumbing, and a telephone.

The inn, which celebrates its 30th anniversary this year, remains ahead of its time with ecofriendly features like electric car chargers and reusable glass water bottles, along with luxury amenities such as ambient sound generators and aromatherapy diffusers. But the Lambs have also preserved some of the house’s old-world charm, from the property’s elegant exterior — its windows and doorframes — to its fireplaces and mantels, and some of the original wood flooring. 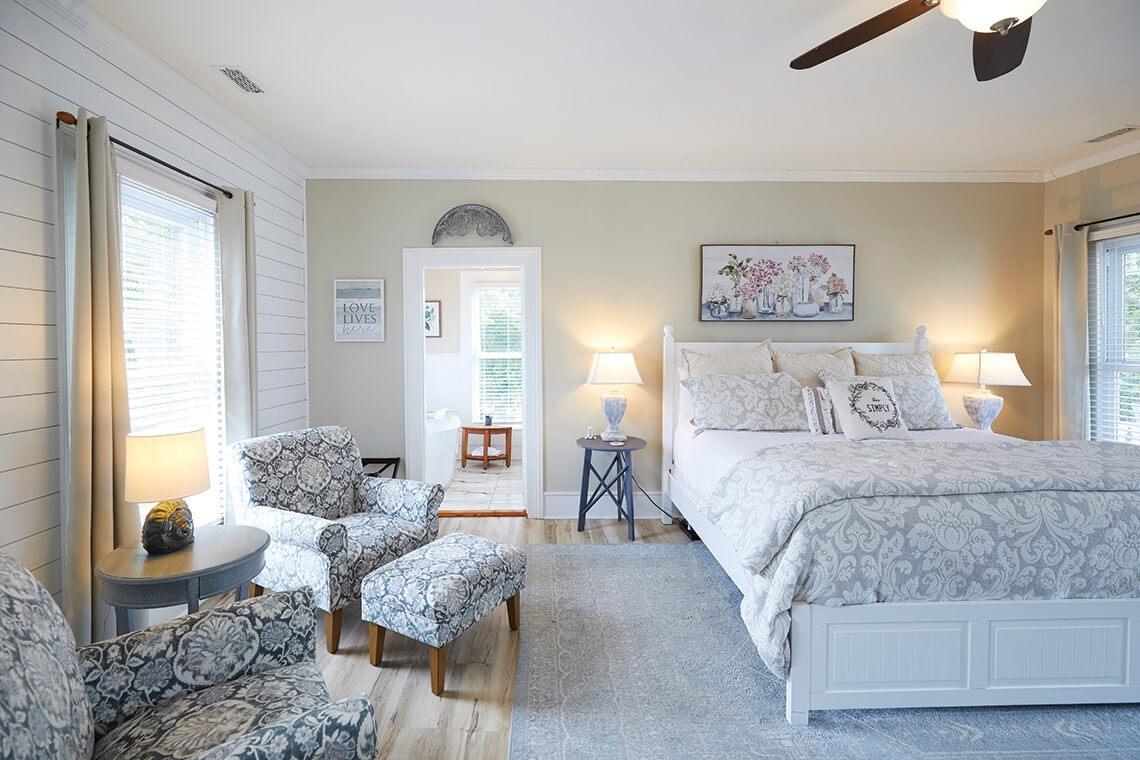 The Queen Anne Spa room was fully renovated in 2020 with a tranquil French country look, a large soaking tub, and a walk-in shower. photograph by Chris Rogers

When the place was built in 1866 as Franklin Masonic Lodge, the Masons celebrated the laying of the building’s cornerstone with a parade. One of Beaufort’s larger structures, the inn has also served as a school, a teahouse, and a doctor’s office. Merchant Hugh Jones purchased the property around 1900, adding three Victorian porches that still showcase the architect’s signature duck-head and fish-tail design in the trim. Jones and his wife added five bedrooms for their seven children.

Today, those bedrooms serve as guest quarters with names like Cottage, Cape Lookout, Harbor, and Queen Anne, the largest room, which features an upstairs porch overlooking the koi pond. It’s not unusual for guests who return year after year to simply ask for “their” room, and the Lambs make every effort to accommodate. “We try to make everybody feel comfortable,” Christine says. “We try to make people feel like they’re a guest in our home because this is our home.” Each room is equipped with Internet, a smart TV, and a private bathroom, a relief to guests who fear they’ll have to share a restroom down the hall. 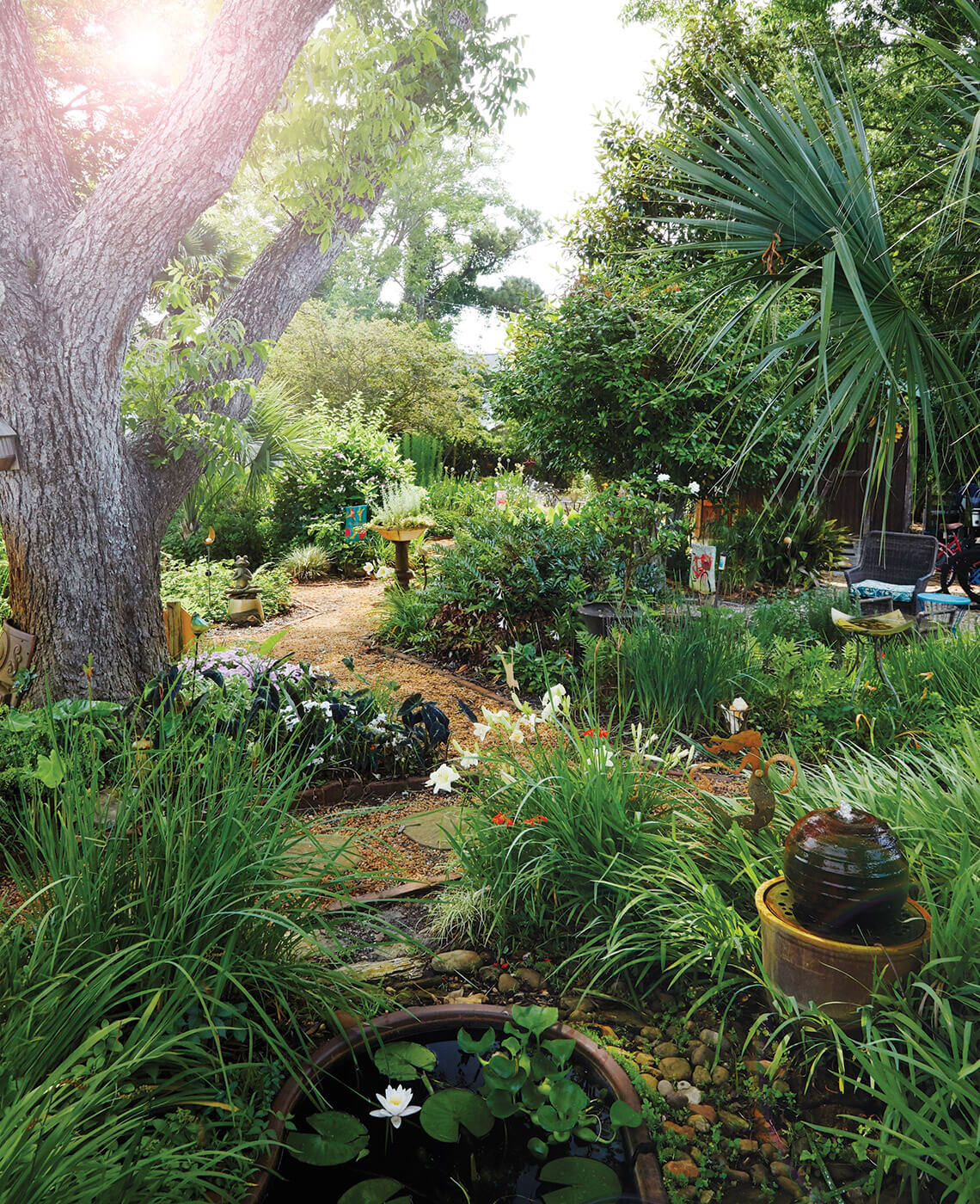 The peaceful garden out back is spectacular, with a sitting area next to a koi pond surrounded by lilies and other plants. photograph by Chris Rogers

Although waiting in line for the shower is not one of them, there are plenty of opportunities for mingling. Guests gather in a cozy sitting area near the entryway or in the adjoining dining room; they pass time on the sunny front porch or the shaded garden patio. Casual conversations in these spots have reunited childhood friends and brought fans and TV personalities face to face. The inn has counted among its guests stars of Wicked Tuna and Mam talent! — Poland’s version of America’s Got Talent — who pose for photos with admirers.

“That doesn’t normally happen when you’re staying in a hotel,” Christine says. “You don’t really get to get that close. Those are the cute little memories that we get. That’s what we tell people: Come to Beaufort and make new memories.”

Beaufort is among the most beloved towns in North Carolina’s Crystal Coast area, which means that the Pecan Tree Inn has drawn visitors from as far away as Austria and Ontario. They come for events including the Beaufort Pirate Invasion in September, the Crystal Coast Christmas Flotilla in December, and the Beaufort Wine and Food Annual Spring Festival in April.

Penny Parker and her husband came to Beaufort in search of a small-town reprieve from their home outside of Washington, D.C. Although the 100-year-old pecan tree for which the inn was named came down a year after the Parkers’ first visit, pecans retain a prominent place in Christine’s goodies — dishes like the pecan streusel baked French toast and homemade maple butter pecan cookies.

The food, especially the cheesy potatoes, is what initially drew the Parkers to the inn during their earliest trips to the village to oversee construction of their home. But a growing friendship with the innkeepers is what kept them coming back. “They introduced us to people,” Parker says, “and it wasn’t just us. They do it for all of their guests. I think it’s the Beaufort way.” 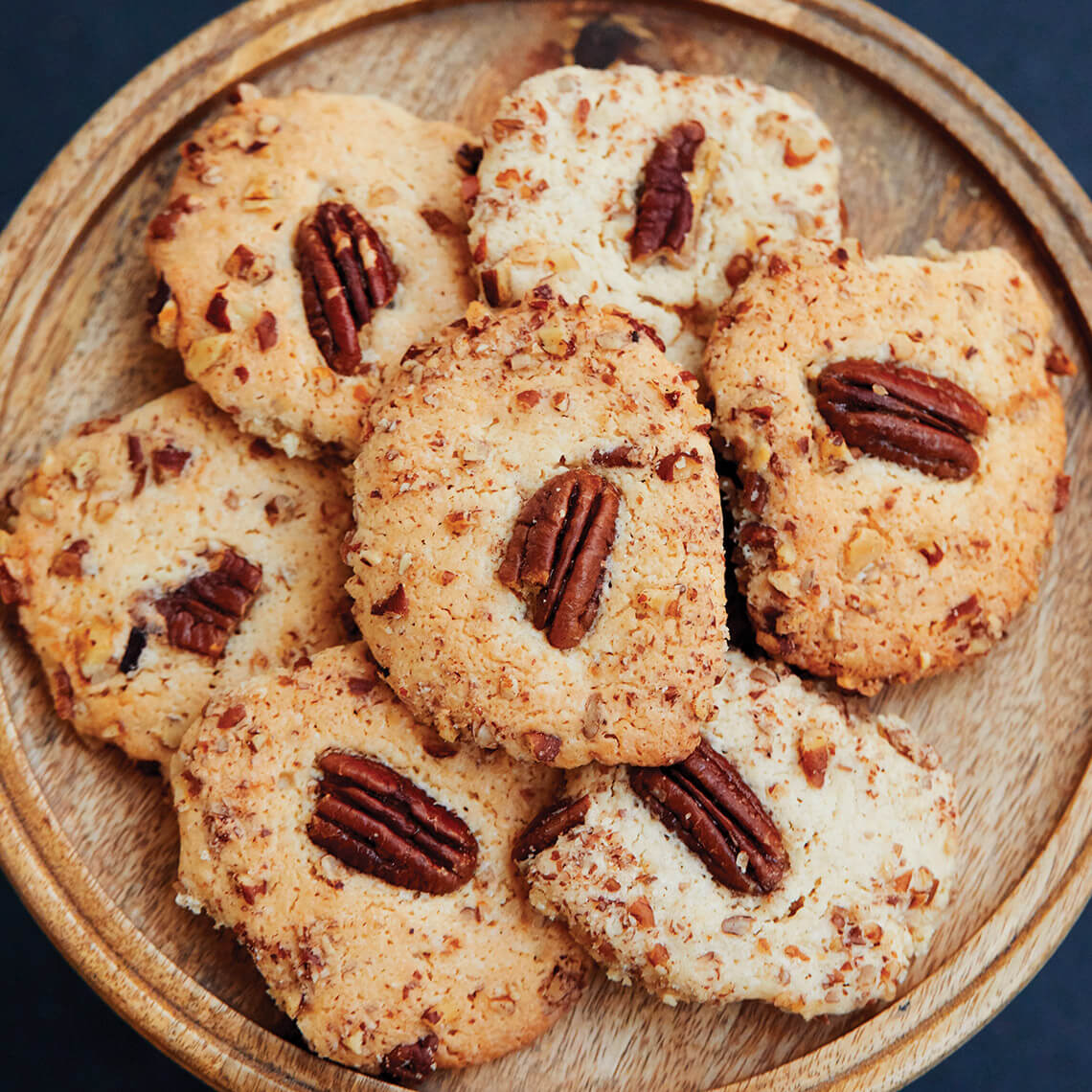 Now full-time residents, the Parkers no longer have occasion to stay at the Pecan Tree Inn. But they, like other locals, are always welcome to stop by for a visit — or just to browse. “It’s the charm, I think, that brings you here and kind of keeps you here,” Parker says. “We were guests at first, then we became friends, and now they’re family.”