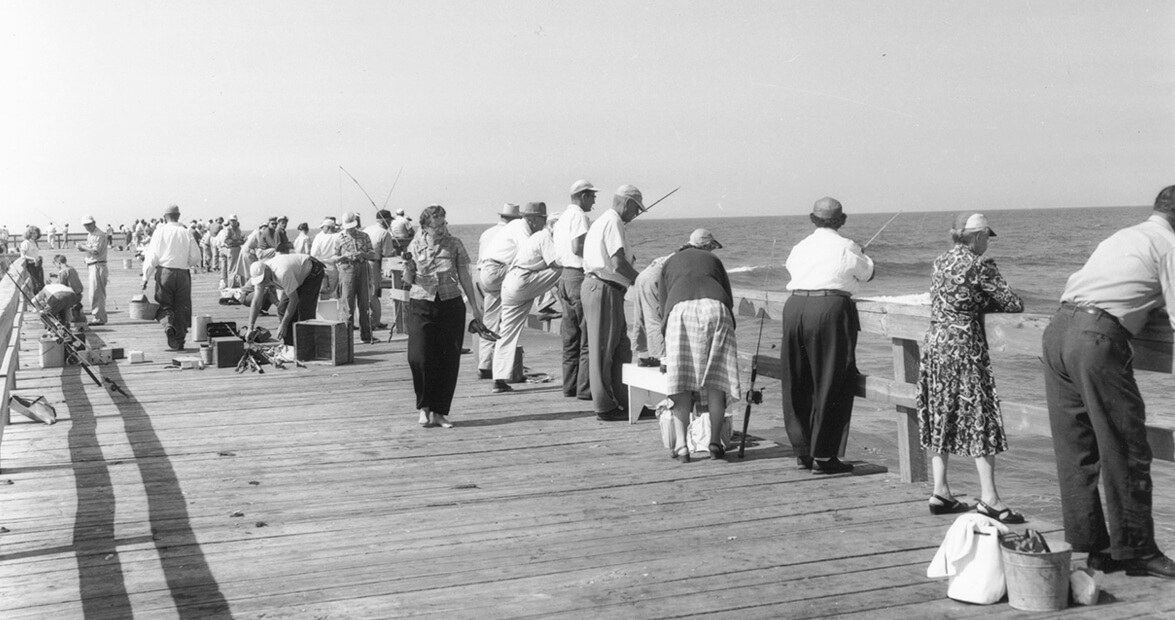 When Warren H. Jennette Sr. and his sons purchased five acres of oceanfront property in Nags Head in the ’30s, they knew exactly what they needed to do: build a fishing pier. At the moment, the land didn’t look like much — a bit of coastline, several small cottages that were used by workers who constructed sand dunes as part of a government project, and a few larger, expensive homes neighboring the land that bordered the ocean — but Jennette saw a vision. On May 22, 1939, work began on the Outer Banks’ first pier.

Not included in Jennette’s vision was the untimely demise of the pier, due to the untreated, permeable lumber used in its construction. So in 1942, the pier was promptly brought down. 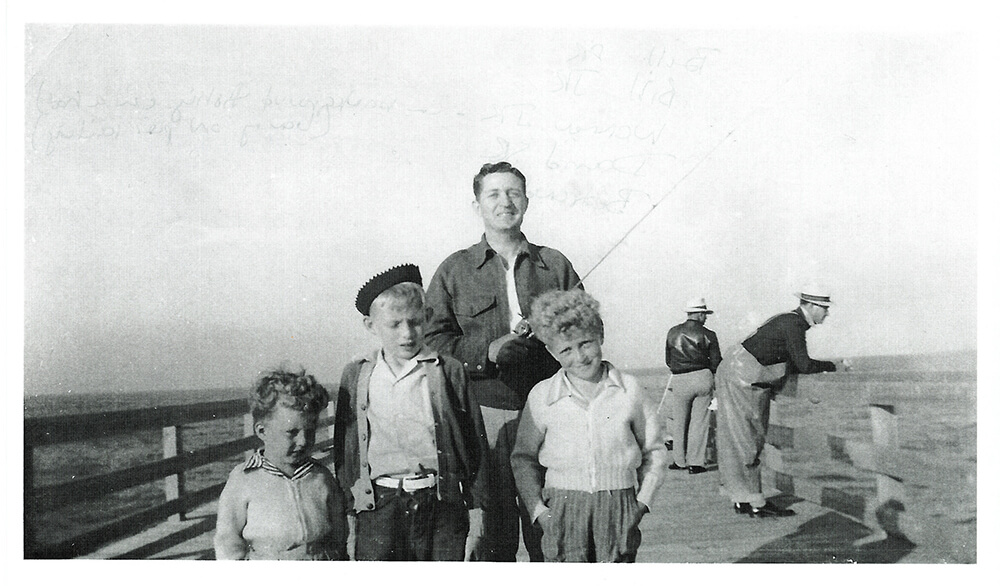 The Jennette family on the pier. photograph by NC Department of Natural and Cultural Resources

And then, for good measure, Mother Nature knocked it down one more time.

But when it returned in 2011 — third time’s the charm — everyone from the locals to the tourists to the state government agreed: This time, the pier would be built to stay.

Historically known for its great fishing opportunities, Nags Head began to attract the attention of people up and down the East Coast after word spread among wealthy vacationers of the great beach property and businesses that were coming to the island in the mid-20th century. As Nags Head grew as a popular destination for tourism, the location became increasingly attractive to build upon.

In 1939, for $6,000, the Jennettes were able to construct a 754-foot-long pier, with a 28-foot-wide T-shaped ending which maximized the number of spots fishermen could stand from. However, poor construction led to the pier’s collapse three years later.

“It was an inauspicious beginning,” recalls Mike Remige, director of Jennette’s Pier. “But they learned their lesson.”

The Jennettes waited for World War II to end before rebuilding; their second attempt would be more successful, with the pier becoming a beloved Nags Head institution.

“Jennette’s Pier was one of the first fishing piers built on the Outer Banks of North Carolina, so there is historical and traditional significance. There are generations of families fishing here from when it was built in the late ’30s,” Remige says. “When the pier was first built, there was a casino in Nags Head. That and Jennette’s Pier were the two main social hubs in the entirety of the Outer Banks.” 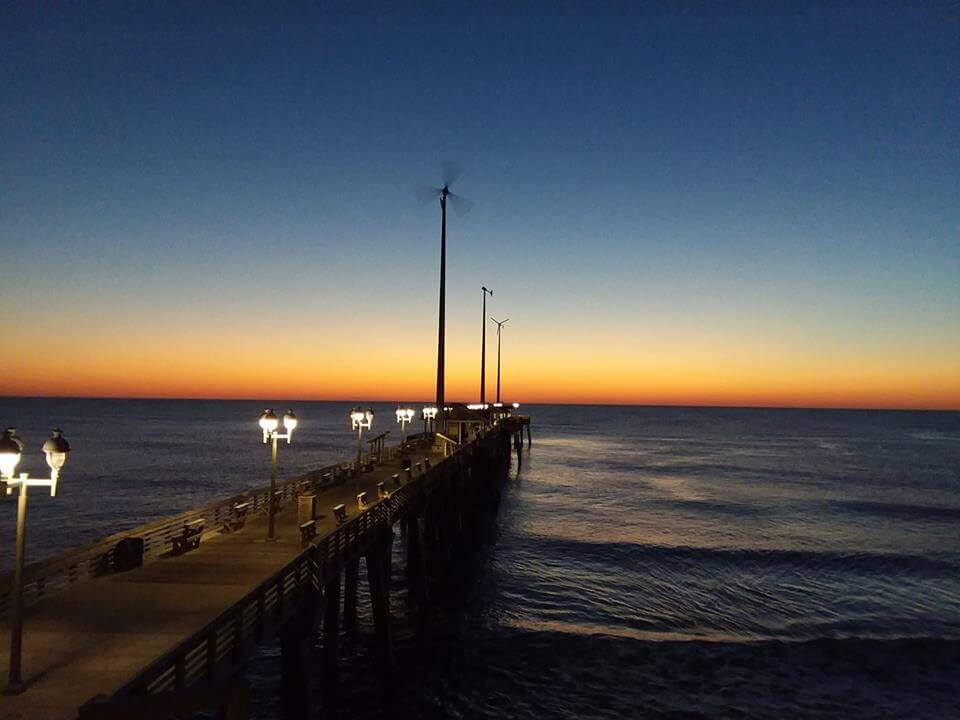 For many visitors, one of the best parts of the pier is the accessibility it grants all socioeconomic classes. Around here, everyone can enjoy fishing and beachside fun.

“I can come out here and sit next to a gentleman and have a conversation all day and not know he’s a multimillionaire,” says Remige, recalling a conversation he had with an elderly fisherman who recently visited the pier.

In its earlier days, the cottages next to the pier were used by visiting fisherman as budget-friendly vacation homes, diversifying the clientele attracted to the Outer Banks to fish. The length of the pier gave fisherman the opportunity to catch fish previously only reachable by boat.

The second incarnation of Jennette’s Pier hit — err, was hit by — a couple of roadblocks over the years. The pier withstood damage from sea worms, hurricanes, nor’easters, even a wayward shipwreck before Hurricane Isabel struck in 2003, severely damaging the pier. Repairs were made to what was left of the pier, but the half to three-quarter of a million dollars it would take to rebuild it wasn’t a realistic option.

“We jokingly called it Jennette’s porch at that point,” Remige says.

The property was sold to the North Carolina Aqarium Society in 2002, then donated to the state of North Carolina, which allowed the aquarium division to take ownership of it and rebuild the pier. It was a decision the North Carolina state legislature agreed unanimously on. As it worked to reconstruct the pier, the legislature had several goals. Not only did it wish to expand public access to the oceanfront and fishery, but it also sought to create a marine education center, which would be environmentally-friendly and self-sustaining while bringing scientific research to the public.

Today, Jennette’s Pier has met all of its goals since building the new 1,000-foot-long pier, which opened on May 21, 2011. It is no longer the only pier on the Outer Banks, but it stands alone as a fishing and educational center where children and adults alike can take part in STEM-based educational programs, learn about wave energy research from one of eight test sites in the United States and of course, how to fish.

But even though the pier was given a well-received makeover, some things never change.

“Our clientele is similar to what it was like at the old pier. It’s a place where families come,” Remige says. Their target audience today isn’t only fishermen; it’s mainly “families of four with $75 to 80 in their pocket [wanting to] make a memory,” assistant director Daryl Law says. Keeping the pier affordable and accessible for all is still a top priority.