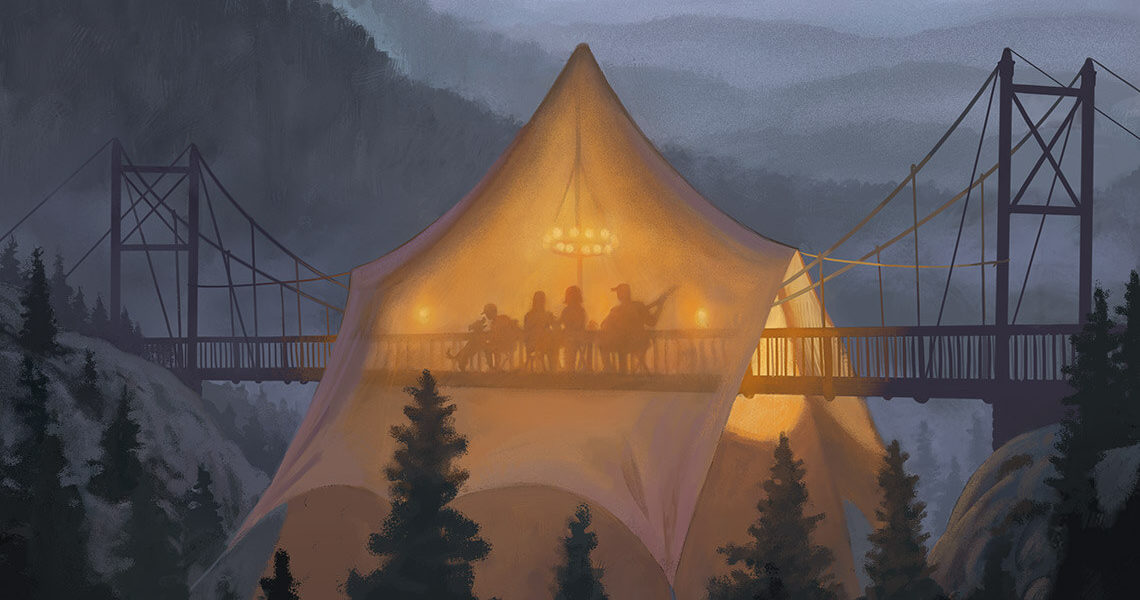 “If we’re going to do this,” so said Julie, “we have to go big.” She spake in that tone Old Testament prophets used to address their wandering supplicants. It was really more of a directive than an attempt at conversation.

By “this,” she meant camp as a family.

And by “big,” she spoke the truth. We’d just returned from a camping trip in which the entire family had crammed like a burrito into our existing tent. We loved camping. Julie and I had camped and backpacked extensively as newlyweds, and we wanted our kids to grow up with campfires and burned fingers and hair matted with three-day-old s’mores. But for that, Julie wanted big: a tent large enough for four inflatable camp mattresses, room for each of us to have his or her own duffel bag, a place for a Pack ’n’ Play, and a roof tall enough that she could change clothes while standing up. “Oh,” she said. “And there’s got to be room for a dog bed. Last time, Biscuit pushed me off my pad and onto the ground. Put that on the list.”

It was a tall order, but I found a tent beastly enough for the task: the Kelty Mantra 7, a 116-square-foot nylon palace with a six-foot cathedral ceiling. Pitched on a state park tent pad, it flopped over all sides like a pancake too large for the plate. It looked like a lunar landing module. Actually, it looked like the garage that a lunar landing module would fit inside.

But oh, the places we all went. Our tent, quickly dubbed the “Taj MaTent,” did indeed swallow all of the required elements, and then some. And over the years, we hauled that tent to the far corners of the country. Early on, we figured out the logistics of flying a family of four and camping gear for a week. We made quite a scene at the airport: two adults, two kids, four carry-ons, and eight pieces of checked luggage, each of which weighed within ounces of the 50-pounds-per-bag limit.

Across the tent floor, sleeping bags rise one after another like low, distant mountains.

We had it down to a science. A 48-quart cooler was packed with stove, lantern, and cookware. Every man, woman, and child had his or her own duffel bag of clothing and personal stuff. A Canadian canoe-tripping barrel held anything breakable. And stuffed into a backpack was the Taj MaTent. Once on the ground, we rented a minivan and bought groceries, cheap camp chairs, and a square of indoor-outdoor carpet to serve as a front door mat. And we were off.

All told, the Taj MaTent sheltered my family in the Grand Tetons during two separate summer trips, for a week in Olympic National Park in the Pacific Northwest, and in the Florida Keys and other points south. But among our favorite family camping memories were our Thanksgiving week trips to Grandfather Mountain. We’d bolt from Raleigh before the Thanksgiving dishes were dry in the sink and set up ol’ Taj as the light was fading.

Late November in the High Country sees some charismatic weather, and we had our share. Our coldest night was a 12-degree boreal plunge when our breakfast eggs froze hard as rocks. One windy night involved a terrifying few hours in 60-mile-per-hour winds. In the middle of the night, we fled the tent in a pajama-clad dash to my pickup truck, with balled-up sleeping bags in our arms. No one slept a wink. Come to think of it, no one talked to each other much the next day, either.

As Markie and Jack grew older, the Taj MaTent was pressed into more civilized duty. During her middle school years, Markie once fit a dozen girls in the Taj MaTent for a backyard sleepover. I picked glitter out of the tent corners for years. In college, she took it on a spring break road trip to Florida for the Okeechobee Music and Arts Festival. I looked up the festival on Mr. Google. Yowser. A lot of tie-dye. And other stuff. Recalling her middle school glitter fest, I was too scared to pull the tent out of the bag for a year. 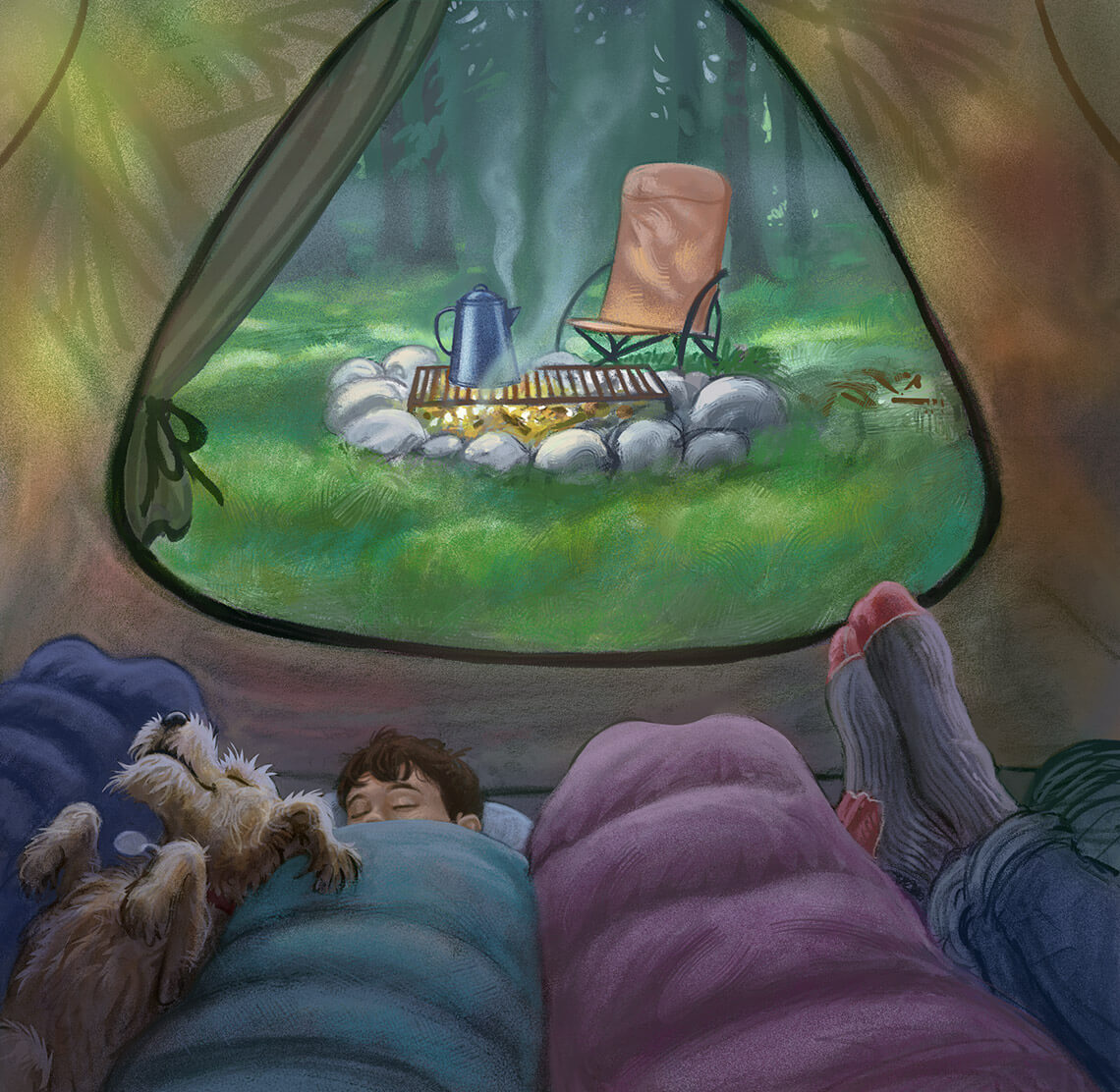 Before fire, before breakfast, before anything, there must be coffee. illustration by James Bernardin

And it’s still in the basement, ready for the next adventure. I don’t know when that will be, or if the four of us will ever hunker down inside together again. I keep the tent as much for the hope that we will as for a touchstone to all the times we had.

Every now and then, when I’m looking for a canoe paddle or a camp chair, the Taj MaTent catches my eye. And it never fails to prompt a memory: I wake up first and lie still. I don’t want to rouse anyone, not yet. In the wan glow of just-after-dawn, the tent is suffused in a gauzy light. Easing up on one elbow, I look across the tent floor, where sleeping bags and blankets rise one after another, multicolored shapes like low, distant mountains on the horizon. A few of those rumpled ridges rise and fall with my family’s breathing. It’s one of my favorite memories — glimpses of my children’s faces snuggled down inside their bags, a tousled lock of Julie’s hair barely visible.

I step gently over the sleeping bags and slip outside, my back stiff as rusted wire. Before fire, before breakfast, before anything, there must be coffee. I pull the stove from the truck and fill a pot with water. Only then do I stoop to the fire.

Julie won’t emerge from the tent till the coffee is ready and the fire is roaring. It’s a small price to pay. I’m lucky to have a wife who loves waking up in the woods or by the water, happy that my children know how to put up a tent and don’t mind a four-day stint without a proper shower.

The fire is crackling; the coffee is hot. I hear a rustle of sleeping bags. Someone’s emerging. The day is beginning. I glance at the vast spread of nylon under the trees and think: Anybody that needs a tent that big ought to be ashamed of himself.