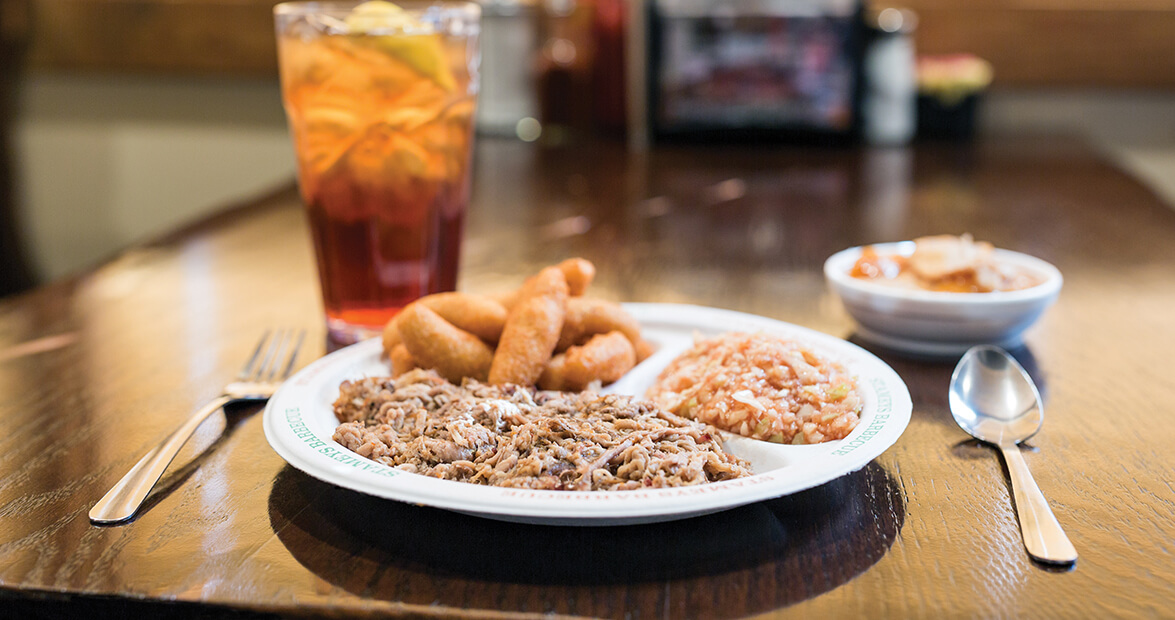 Oh, lord, how many times in my life did I eat at the late, great Blue Mist Bar-B-Q restaurant on U.S. Highway 64 between Asheboro and Ramseur, on Saturday afternoons, when the wood cooker out back spewed plumes of smoke — that blue mist — over the top of the building? Maybe 100 times? Maybe 200 times?

How many times did I slide into a window booth next to my grandparents, next to my parents, or next to my best friend from high school when we finally got bored cruising a one-mile stretch of Fayetteville Street on weekend nights and decided, simply, to just go get ourselves a sandwich?

How many times did I squirt sauce from a squeeze bottle, mash down a steamed bun, scoop up spilled slaw with a plastic fork, dip a hush puppy into ketchup, wad up a square of wax paper, and drain a Styrofoam cup of sweet tea?

Blue Mist opened in 1948 and closed in 2013, and for as long as I lived in Asheboro, it was our barbecue place, just like your place may have been A&M in Mebane, or Whitley’s in Lexington, or Old Hickory House in Charlotte. Was it the best? I don’t know. It was good. Or at least, it was good to me.

Yes, I know. East or west. Whole hog or pork shoulder. Tomato or vinegar. The feud has been going on for a long time. We’ve written about it. Heck, everybody’s written about it. A few months ago, The New Yorker published a 4,000-word treatise on what constitutes “real” North Carolina barbecue. National Geographic loved our barbecue so much, it proclaimed a place in Ayden (Notice our cover? It’s from that place.) as having the best barbecue in the world.

An Internet search for “North Carolina barbecue” brings up 1.1 million entries. These days, newspaper columns, radio commentators, Internet articles, and barbecue experts all over the place are telling you that your place, the one you’ve been going to all your life, is the best. Or maybe it’s the worst. These days, other people are making those decisions.

Which brings me to a revelation: For all those years I ate at Blue Mist, I don’t remember anyone talking about these things. Nobody went on quests to find The Perfect Plate. Nobody made Barbecue Bucket Lists. Nobody talked about whether the meat was smoked over wood or not (although to be fair, I guess it all was). I never heard anyone pledging allegiance to a certain style. We all just ate what was served in the restaurant down the road. We liked it. It was all good to us.

Back then, our barbecue joints weren’t landmarks. They were just places in our towns where we went for lunch.

I’m glad the rest of the world has caught on to the fact that we have something good here. But I worry that the celebration has given way to criticism. That in finding ourselves in the midst of this Great Barbecue Debate, we’ve lost what it means to slide into a window booth somewhere and just, simply, eat.

Every couple of weeks, on doctor days, my mom drives her mother, my Grandma Dot, to Country Barbecue in Greensboro. It’s something for the two of them to do together, and they order the same thing every time. Chopped sandwich. Hush puppies. Sweet tea. They don’t talk about barbecue. They don’t have to. This has been their place for a long time. They already know it’s good.