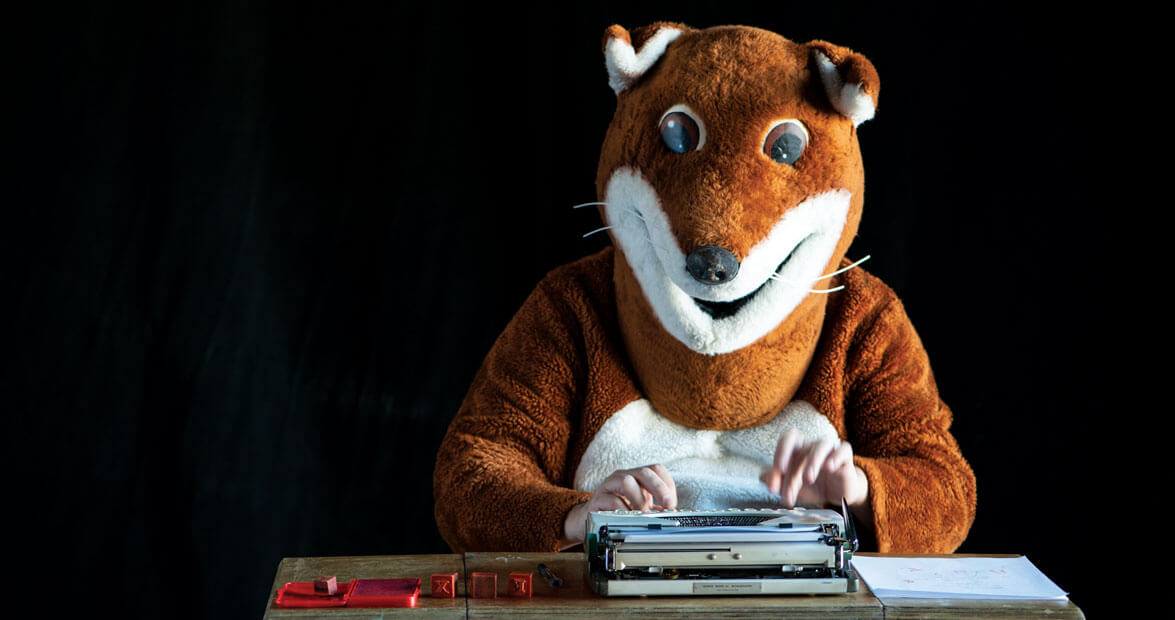 Fred Fletcher Park has turned into a city of tents. Artists sitting in lawn chairs chat with customers about handmade jewelry and herb-scented soaps. On the far end of the Raleigh park, a pack of onlookers has gathered around an orange tent. Inside, there’s a fox. A man-size fox, pounding the keys of a 1966 Olympia SF deLuxe typewriter.

“Is that a rat?” a man asks, peering inside.

“Oh, it’s the Poetry Fox!” a woman says, stepping in line — she’s clearly done this before.

Standing before the Fox is a dark-haired, freckle-faced boy named Davis. He eyes the Fox with cautious optimism. The Fox, meanwhile, is too busy beating out a stream of letters to notice. Then, suddenly, the typing stops, and the Fox pulls the paper out of the typewriter with a flourish. He holds in his hand — er, paw — a finished poem, stanzas and all, complete with a FOX stamp and a quick sketch of a fox face — his signature, naturally — across the bottom.

The Poetry Fox is local poet Chris Vitiello. Give him a word, and he’ll write you a poem. Right on the spot. Davis gave him the word “improv” because he had just started taking classes. In return, he got this: Don’t think, thinking is boring … I am all improv, spontaneous, what I do next, I don’t know yet / In fact, what I say after this word could be anything, it could be / Banana or Mexico or orangutan or orange …

“A Poetry Fox poem is a personal poem. It’s this small but incredibly intimate gesture.”

Walt Whitman Vitiello is not, but that’s not the point of the Poetry Fox. Poetry is about “taking care of somebody,” Vitiello says. That could mean a tight rhyme about a unicorn to brighten someone’s day, or free verse about a grandmother to help ease a loss. Vitiello’s ability to connect with strangers on an emotional level is what makes his particular brand of performance art a hit at festivals and events around the Triangle, and occasionally across state lines. “For me, poetry doesn’t have a capital P,” he says. “Poetry is a different kind of language that takes a different angle.”

By the end of his day in Fred Fletcher Park, the Poetry Fox will have written 63 poems; last year, he attended about 75 events, and he’s written more than 12,000 poems overall. Even so, each poem is different. “I have these very different practices as a poet,” Vitiello says. “A Poetry Fox poem is a personal poem. It’s for that one person in that moment — not like a universal, grand gesture. It is this small but incredibly intimate gesture.”

A relative gave Vitiello the fox mascot outfit as a joke seven years ago. “It had sort of fallen into her hands because she was organizing a street fair, and some vendor had left it behind,” he says. She was going to toss it in the Dumpster, but, instead, she found it a new owner. Vitiello had tried his hand at being a street poet before, but people seemed uncomfortable asking a stranger for a poem. Putting on a fox costume, however, made the exchange spontaneous and intriguing. And so, what started off as a gag turned into a shared human experience. “It was just a lot of fun — fun for kids who wanted a poem, and fun for an adult who wanted to come up and give me a lewd word,” he says, laughing. “It’s pretty exhilarating to be the writer who gets to do that.” 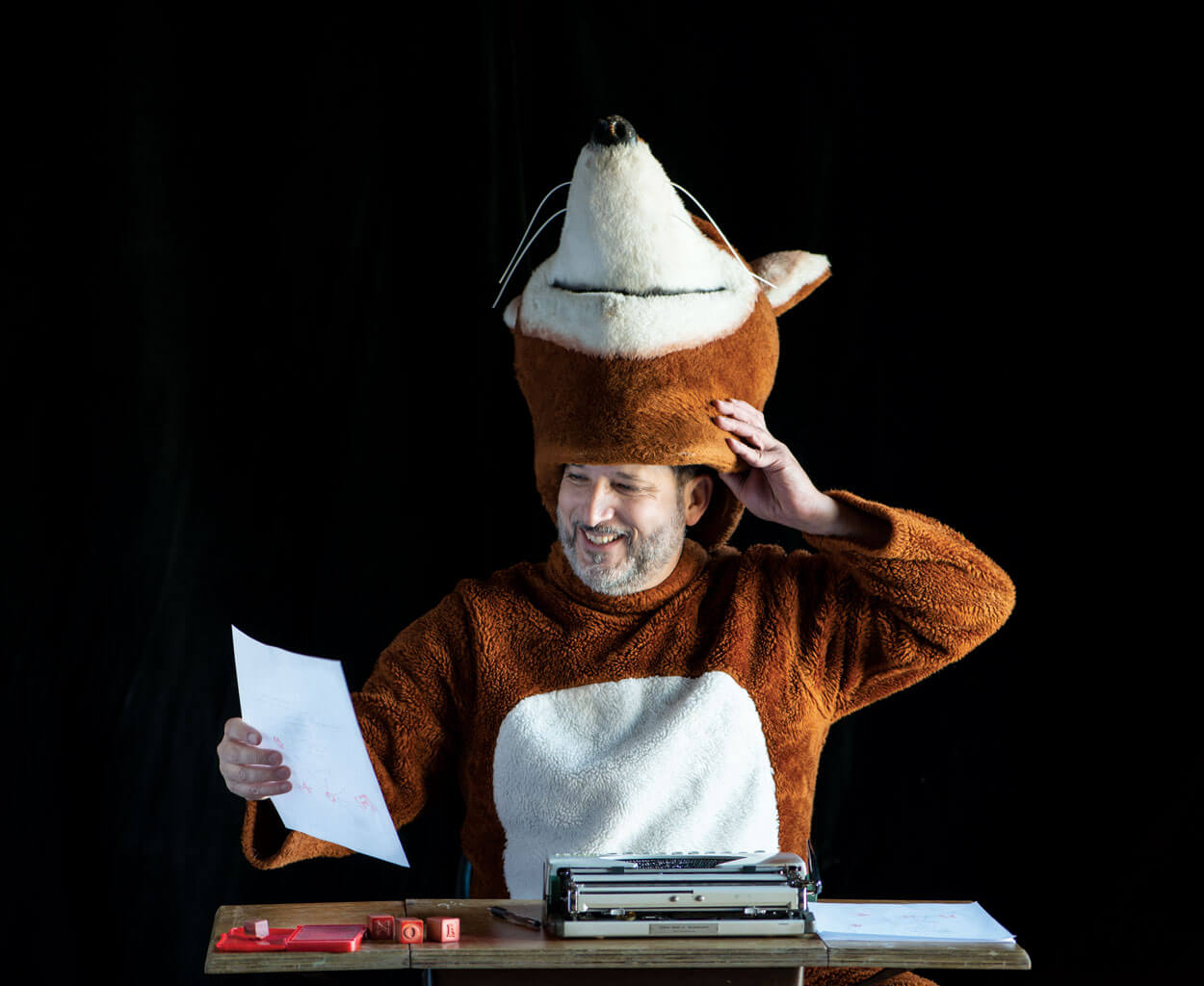 The Poetry Fox unmasked: For Vitiello, who works at the NC State libraries, poetry is about connecting with someone. At events around the Triangle, children and adults are drawn to his offer of a custom-made poem. photograph by Lissa Gotwals

Vitiello has been writing for as long as he can remember. “Before I could write, I was telling my parents to write things down,” he says. He binged on English classes as an undergraduate student at William & Mary University and, later, got a master’s degree in creative writing and poetics. Now, he’s surrounded by an assortment of literature as a communications specialist at the North Carolina State University Libraries — his day job. “I always knew I would be writing something for somebody for some reason. Always,” he says.

The Fox helps Vitiello write that something for someone, whether it’s about tacos (he made a deal with his daughter to work the word into at least one poem at all of his Fox gigs) or a subject of a more meaningful, personal nature. “People will give me the name of someone they recently lost or a word that obviously says that they’re in pain,” he says. “I just try to take care of somebody, to say something that reinforces them.”

At a festival in Augusta, Georgia, Vitiello met a bereavement group — women who had lost relatives to illness and sons to gun violence. “They were just giving me their lost people’s names, and they would come with a story, not just a word,” he says. “They came back all three nights of that festival to get poems. It became a little workshop.”

For people who are grieving, Vitiello hopes the Fox provides a dose of grace and compassion when it’s needed most. And for children, for whom the world is full of exciting and new experiences, the Poetry Fox introduces a fresh form of self-expression. “There are kids that have gotten a poem as a third-grader and a fourth-grader,” he says. “Then I see them as a fifth-grader, and their mom is saying, ‘We had to get a typewriter for the house because our daughter wanted to make poems.’ ”