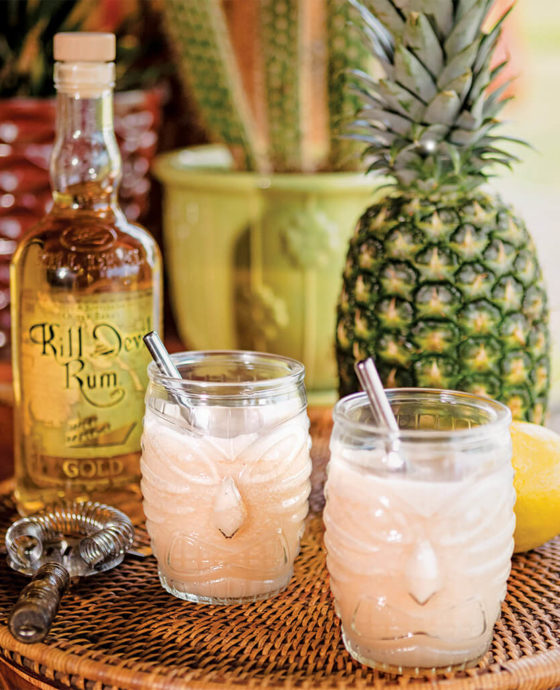 It’s hard to find many people along the Outer Banks who use the word boozhyot anymore. It sounds sort of like “BOO-shot,” and it helps to have a little booze in you when you try to get the slur in the middle just right. It used to be slang for “have a good time.” At least, that’s what they claim at Outer Banks Distilling in Manteo, the home of Kill Devil Rum.

When you step up to the bar for a tasting or to order a cocktail, you’re surrounded by the mystique of rum’s history up and down the Outer Banks. There are maps of shipwrecks, historical pictures, and salvaged items like a big ship’s wheel. And there’s a sign explaining the definition of boozhyot, a term that comes from the Prohibition era, when smugglers aboard pleasure craft — or “booze yachts” — sometimes dumped illegal cargo that washed ashore.

Co-owner Scott Smith admits, though, that an awful lot of what you hear about liquor on the Outer Banks may be a wee bit embellished. “There’s a lot of legend that gets wrapped around truth,” he says.

The Outer Banks were made for legends and tales, especially when you mix in liquor: rum and pirates; remote beaches, marshes, and fog-shrouded inlets that were perfect for hiding treasure and, later, Prohibition-era contraband. According to Smith, Kill Devil Hills was even named for an old Caribbean version of rum created from wild yeast and the molasses left over from making sugar. Enslaved West Africans on sugar plantations used it medicinally, saying it “killed the devil inside” — the devil being bacterial contamination.

When people started to distill rum, making it a little — OK, a lot — easier to drink, they also figured out that it wouldn’t spoil on long voyages, the way water did. So ships started keeping barrels of rum on board for the crew. Since plenty of those ships wrecked on the jagged coast of what eventually became North Carolina, and since barrels float, locals along the coast liked to grab the barrels from wrecks and hide them in the dunes. “Anywhere you have the history of the sea, you’re having rum,” Smith says. “Rum was the common man’s drink.”

Many old families along the Outer Banks have passed down stories of ancestors who floated ashore on — and sometimes in — barrels from shipwrecks. And notices of salvage auctions give a good idea of what other kinds of things floated ashore. One auction notice from 1812 included the cargo from the wreck of a schooner called Thetis: “14 hogsheads of rum, some apple brandy, wine, cider, butter, cheese, tea, powder, dry goods and many other small articles.”

“Anywhere you have the history of the sea, you’re having rum.”

All of that was a long time ago, though. Now, Smith and his three partners — Kelly Bray, Matt Newsome, and Adam Ball — are putting everything they have into bringing rum-making back to the Outer Banks. This time, it’s legal.

The Outer Banks has always been a place to scratch out a living any way you could, from fishing to logging. Isolated from the mainland, people from Duck down to Ocracoke did for themselves, and they liked it that way. If they didn’t salvage rum from a wrecked ship, they made moonshine out of whatever they had.

Philip Howard, owner of the Village Craftsmen, a popular art and craft shop in the town of Ocracoke, is descended from one of the early families. People on Ocracoke were churchgoers, he says. But plenty of them still liked to take a drink. “People used to say you could leave a fifth of whiskey holding down a $100 bill on the hood of your car,” Howard says. “When you came back, the fifth would be gone, and there’d be a rock holding down the $100 bill.” 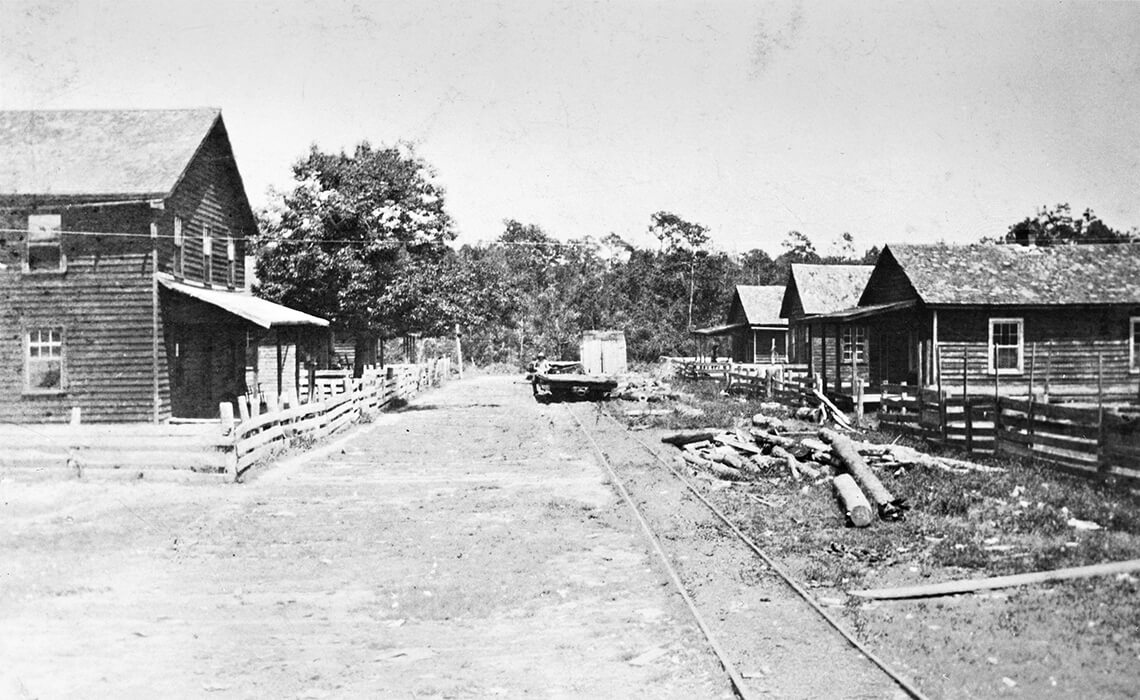 Local folks made “meal wine” — cornmeal, water, yeast, sugar, and any kind of dried fruit, like raisins. They’d mix it in jars and hide it in the woods to steep for a couple of weeks, until the yeast turned the sugar into alcohol. Howard says that the difference between a mainlander and a native “O’cocker” was that if a rat got into the meal wine, the mainlander would throw it away. The O’cocker would wring out the rat and keep the wine.

Farther north, on Roanoke Island, people still talk about “the ghost town” of Buffalo City, once located across the marshes from Manteo on a rail line. Founded as a logging town by the Buffalo Timber Company in the late 1800s, it was a thriving place, with a hotel and a post office.

By the 1920s, logging was slowing down just as Prohibition arrived. So people in Buffalo City built stills, using rye to make whiskey that quickly earned a good reputation. Buffalo City was abandoned in the 1950s, and the land was eventually bought by the U.S. Fish & Wildlife Service to create the Alligator River National Wildlife Refuge. Only a few traces of the village, including some of the train tracks, remain.

When Scott Smith settles in for a drink at a local bar, where tall windows overlook a peaceful late afternoon on Pamlico Sound, he orders a beer, not a cocktail. “I’m swimming in rum all day,” he admits. A native of Newport News, Virginia, Smith has always been obsessed with archaeology. At Longwood University in Virginia, where he majored in communication studies with a history minor, he persuaded a professor to let him come along to a dig on the island of Tortola in the British Virgin Islands. While he was there, he started learning about the Caribbean rum industry, a history that captured his imagination.

After college, in 2004, he moved to the Outer Banks and ended up working at Outer Banks Brewing Station in Kill Devil Hills. His coworkers were brewers Adam Ball and Kelly Bray and bartender Matt Newsome. Newsome and Bray both came of age on the Outer Banks, hearing about the history of illegal liquor in the area, and all four young men were ready to quit working for other people. They didn’t want to start a brewery, though, because there were so many of them. 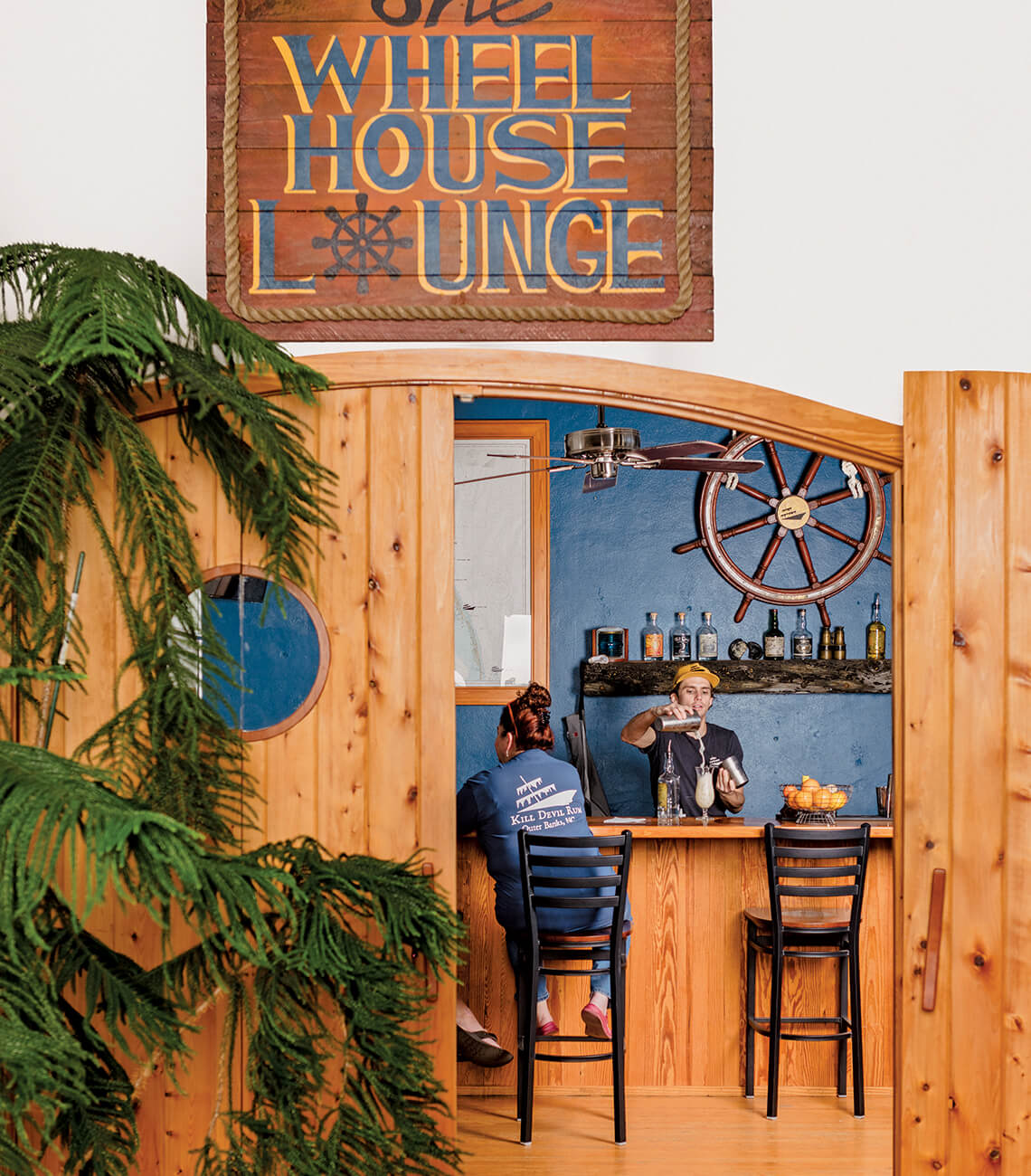 Below a salvaged ship’s wheel at Outer Banks Distilling, Matt Joyner mixes a RumTing in the Water (rum, grapefruit soda, and a simple syrup) for Pamela Gutlon. photograph by Baxter Miller

“We were ready to jump ship and work for ourselves,” Newsome says. “Rum was a no-brainer.” They originally planned to build in Kill Devil Hills. But distilling requires good water, and Manteo was the only municipality in the area with a full water system. So they found a 1946 brick building on Budleigh Street that was originally a furniture store and then a department store. It later housed the school board, but it had been abandoned for years.

They all quit their brewery jobs in 2013 and started renovating the building with help from Bray’s dad, Larry, a carpenter. It was a massive job: Original cypress beams were removed and used as doorframes and woodwork, the distilling room floor was replaced, and pine floors were refinished. They hauled out 20 tons of scrap and hauled in artifacts like the ship’s wheel from the famous 1925 wreck of the schooner Irma. A wooden display shelf behind the tasting room bar is timber from a wreck that’s been dated to 1652.

It took two years to get the operation up and running. And the four men soon found themselves embraced by the local community. “The amount of support we had was unreal,” Smith says. Since their first batch of white rum in 2015, they’ve grown quickly, with five fermentation tanks making white, gold, and spiced rums. They age their rums in used bourbon barrels from A. Smith Bowman Distillery in Fredericksburg, Virginia, and they now have a yearly series named for local shipwrecks. Their pecan rum is made with pecans from a 90-year-old grove in Manns Harbor and honey from Wanchese; after being soaked in rum, the pecans are dried, coated with sugar, and sold in the distillery shop.

“Our first batch to today is night and day,” Smith says. “We were so naïve.”

For both tourists and locals, though, being able to buy rum made right there in Manteo is a long way from the days when what you had to drink depended on either what you could make illegally or what you could salvage from the sea. That was a time when everybody knew the word boozhyot from the local musician Ivey Scott’s song commemorating a day when barrels of whiskey floated ashore from a boat loaded with contraband:

Some would part with all they got
And some a little bit more
To see another time like that
When the booze yacht run ashore.

Smith has found a lot of satisfaction in becoming a part of such a long history, and the people of the Outer Banks have embraced him. “I don’t have four generations buried here, but I have respect for the area,” he says. “I felt like I’d come home.”