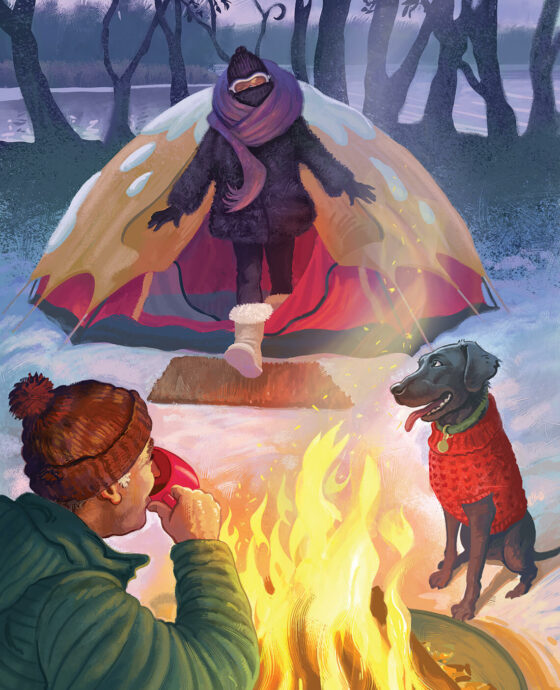 There are rules that must be followed. Protocols. Procedures. Directives. None of these are written down, in any form, anywhere. But these rules are in force, and I know better than to even barely bend them. They are as follows:

When all of these conditions are met, then — and only then — will Julie exit the tent on a deep winter camping trip, gracing the world with her sleepy-eyed presence. 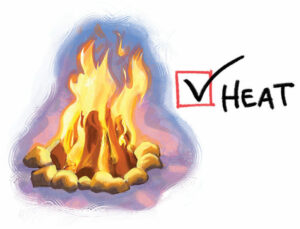 Sitting by the fire, I listen for the rustle of her sleeping bag. I smile when the tent walls shimmy as she adds a few layers. The dog and I have been up for an hour already, and a second pot of coffee is on the camp stove. I hear the tent door zip open, and she emerges slowly, as if from a nylon chrysalis. Dressed in her thick black walking tights, black fleece coat, black gloves, black hat, and ancient, sooty UGGs, she looks like a Julie-size woolly worm tentatively testing the climate.

Winter camping requires a certain mindset. For Julie, she has her mind set on being as toasty as possible, no matter the forecast. Which is where The Rules come into play.

When Julie and I first met, she had never been camping. She had never even thought of camping. And her family rarely ventured to the mountains. Hers was a beach crowd, through and through. But soon enough, she fell in love with tents and smoky Pop-Tarts by the campfire and long hikes in the hills. We’ve camped as a family since the kids were little — and I mean changing-diapers-in-thetent little — and over the years, we’ve spent spring breaks in the Florida pines and summer vacations in Wyoming. We’ve spent Thanksgiving breaks on a traditional winter camping trip in the frigid shadows below Grandfather Mountain, and we’ve taken a certain kind of pride in hitting the woods when the thermometer takes a nosedive. 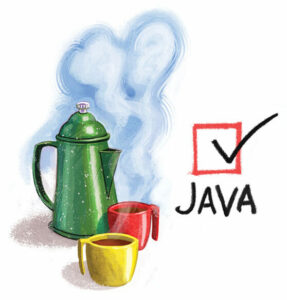 Our family record was made on one clear night when we were the only tent campers in the campground. The weather forecast was particularly unpleasant, a level of cold that even Markie and Jack might not have been able to fathom. We pumped the kids up in the days before the adventure. Markie didn’t take much convincing. She loved camping, anywhere, anytime, as long as there were pancakes and hot chocolate.

For Jack, we framed the trip as an epic, record-breaking adventure. Sure, we’d camped in a 20-degree chill zone plenty. But a night in the teens? Who among his pals could top that? Maybe we’d get lucky and the temperature would hit the single digits. That’s next-level camping, right there.

We packed heavy quilts to cover the sleeping pads, and everyone had their own heavy sleeping bag, with more quilts and down throws on top of the heap. We were each cocooned in multiple layers, and it was a good thing: The temperature plunged to 12 degrees at dawn. My boots froze to the ground outside the tent. 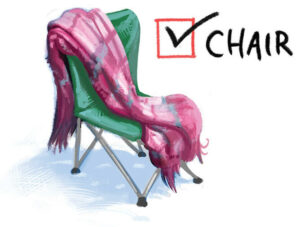 I’d had the foresight to arrange the fire the night before, building the pine sapwood shavings and twigs and finger-thick kindling into a teepee shape for a hassle-free light. Still, I shivered so hard that I had to two-hand the lighter to work the striker.

But you can bet I remembered The Rules. Within 15 minutes, I had a fire roaring that you could see from the moon. Slices of raspberry Danish toasted on the grate. I ticked off a mental list of the requirements: heat, java, chair, treat. I know my place.

Julie called from inside the tent. “Is the fire going?”

“Yes,” I answered. “And I hope you brought your swimsuit, because it’s hot out here.”

That was one of my prouder moments, but I know I can’t rest on my laurels. She’s a tough one. Last winter, Julie and I made a quick weekend dash to the Uwharries. We were practically alone at the national forest campground. At sundown, Badin Lake turned reddish-pink through the trees. At pitch-black night, stars twinkled through the woods’ winter-bare limbs. I built a fire, and we cooked orange brownie bombs — hollowed-out navel oranges filled with brownie batter and wrapped in foil — in the coals. We asked ourselves for the hundredth time: Why don’t we do this more often? 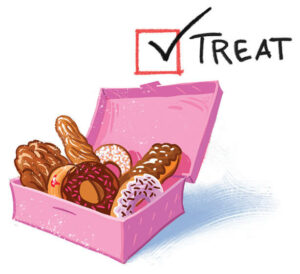 Before heading to bed, Julie looked suspiciously at the pile of wood I’d organized by the fire ring.

“Is that going to be enough for the morning?” she asked.

“Sure it is,” I said. Her stern demeanor gave me pause. “I mean, it looks like enough,” I said, more meekly than I’d like to admit. “You don’t think so?”

She bent low to shimmy through the tent door. “You’re the expert,” she called over her shoulder. “But you know The Rules.”

Do I ever. I switched on my headlamp and picked up the hatchet. I felt a shiver, but it wasn’t the cold. It was the realization that I hadn’t packed a sweet breakfast treat, and there wasn’t so much as a honey bun within five miles. It might be a long night, but it wouldn’t be as cold as the morning to come.