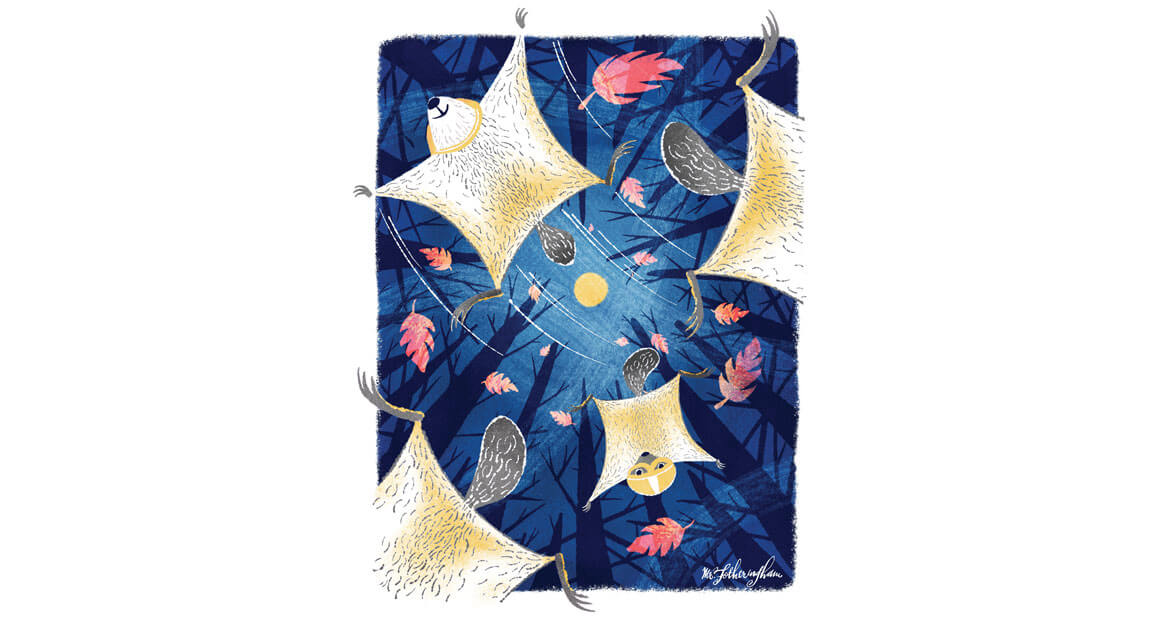 If I’m going to see them at all, this is when we’ll cross paths, in the fall, as the weather changes and the leaves turn and I find myself more often in the woods at sunset, walking back to the truck as the last light leaves the sky. Suddenly, something dive-bombs out of the trees. I catch it out of the corner of my eye as it arcs across the trail like an airborne goblin. I’m always startled when I see the first flying squirrel of the season, as if I’ve forgotten that these shy denizens of the big woods exist at all. As if you could ever forget such a winsome little creature.

Let’s settle this right away: Flying squirrels don’t really fly, of course. They glide. Silently, seemingly without effort, appearing out of thin air. Flying squirrels have folds of loose skin that connect at the wrist and ankle, a neat little set of appendages called “patagia” that allow them to soar for incredible distances. One hundred feet is a cinch. One hundred fifty feet wouldn’t get their name in the paper. And depending on how high they are when they launch, 300 feet — about the length of a football field — isn’t out of the question.

Altering tension on the patagia, and steering with a flat, rudder-like tail, flying squirrels can maneuver around branches, spin 90-degree midair turns, and cut lateral loops as they twist and careen down through the trees to nearly take my hat off and land in the dark, scary woods with a sudden skittering splat that nearly frightens the bejesus out of me. Whatever a bejesus is.

Flying squirrels go through a preflight checklist before hitting the runway.

There are more than 40 species of flying squirrels worldwide, including the Indian giant flying squirrel of Asia, which is nearly three feet long from nose tip to tail tip, and would likely stop my heart if one ever cut a loop in front of me on the farm road through the oak bottom. But only two species live in North America, and we’re lucky that both show up in North Carolina.

The critter that I sometimes run into is the Carolina southern flying squirrel, a lover of nesting in attics and chimneys, and perhaps the most common mammal that the average North Carolinian never sees.

But up in the mountains, it’s a different story. The northern flying squirrel lives across a huge swath of the continent, from Canada to Maine, and it hangs on in high-elevation “sky islands” of red spruce and northern hardwoods found on the highest Southern Appalachian peaks. It’s known to live on 13 summits in North Carolina, Tennessee, and Virginia, but the animals are on the ropes as their habitat is diminished by tree disease and carved up by roads.

The closest I’ve ever been to a flying squirrel was on one of those mountains, along Mount Hardy and Beartrap Knob, deep in the Middle Prong Wilderness of Pisgah National Forest. I’d followed a biologist into snowy February woods, hiking with gear packs and lightweight aluminum ladders to monitor a few of the nearly 1,000 flying-squirrel nesting boxes assembled across the mountains. The animals can crowd into cavities when the temperatures drop; curled into tight balls, they can withstand drops in body temperature of more than 14 degrees Fahrenheit. That’s one of the ways that Carolina northern flying squirrels have been able to stick around in our High Country. 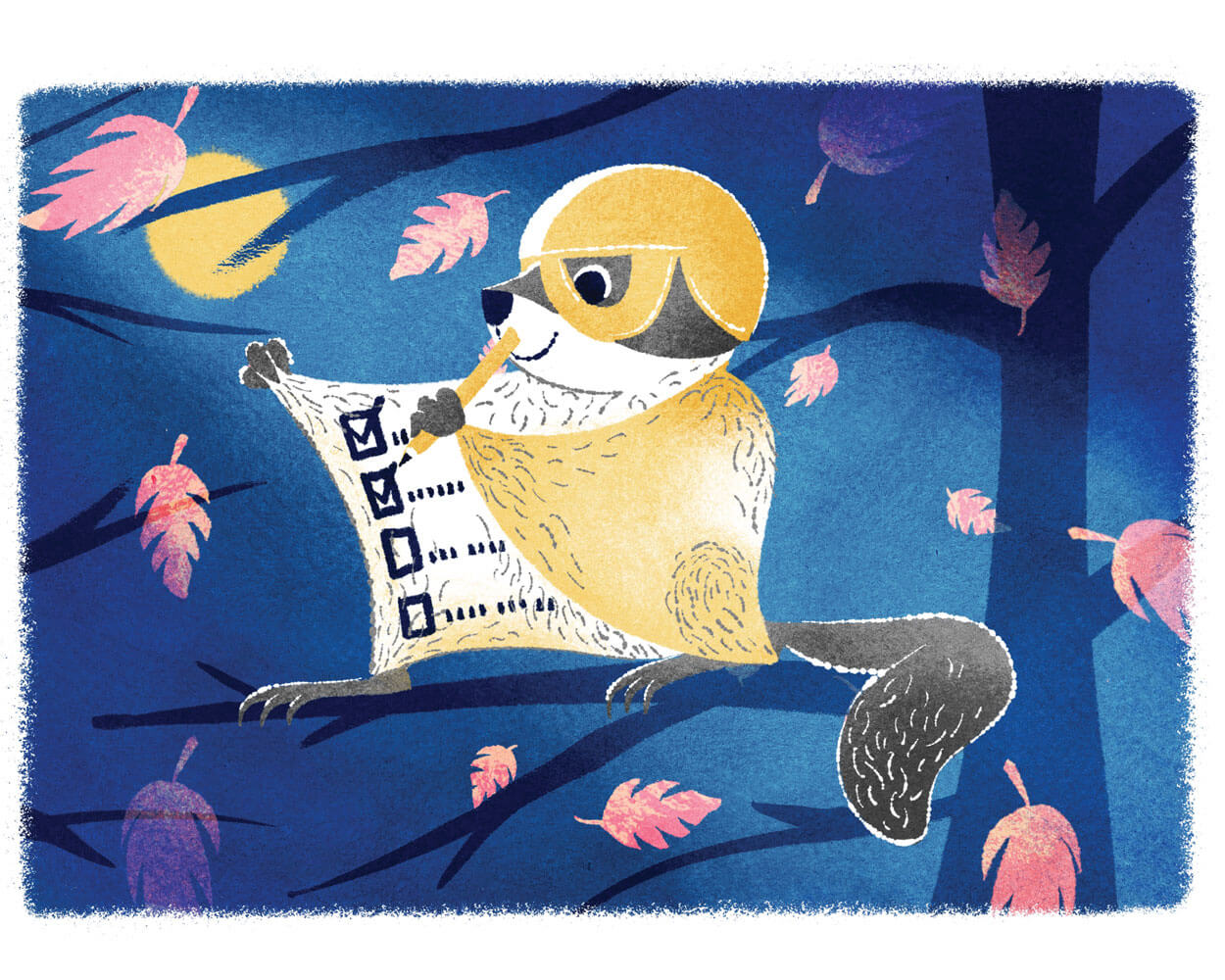 Although we don’t always make it easy on them. One of the limiting factors and day-to-day challenges facing mountain fliers are the roads we’ve built to enable human populations to access their haunts. It turns out that mountain byways like the Blue Ridge Parkway are too wide for gliding squirrels to cross in the air, and they are loath to scamper across these open slashes on the ground. Clearing trees from scenic overlooks can also prevent the squirrels from accessing habitats.

The construction of the Cherohala Skyway connecting Robbinsville, in Graham County, with Tellico Plains, Tennessee, has been a particular challenge for them. Local squirrels captured and outfitted with radio transmitters showed that they weren’t crossing the wide strip of asphalt and close-cropped median at all — by foot or by wing — and the federally protected Carolina northern flying squirrel needed something of a lift. That’s when state wildlife officials teamed up with Duke Energy to erect 40-foot-tall utility poles along the side of the Skyway — launching and landing pads, essentially, for embattled squirrels that have lots of reasons to try to cross the road.

With life itself at stake during each and every launch, flying squirrels go through a preflight checklist before hitting the runway. Prior to takeoff, a flier will lean out from its tree branch perch, cocking its head, taking a step to the left, then to the right. Scientists believe they are triangulating to get a sense of the distance and angle from Point Oak to Point Beech. Then they either launch from a standing jump position or get a running start, and hit the air. They spread their arms and legs to puff out the patagia like a giant — OK, miniature — sail, and glide: through the night, through the black dark, through branches and twigs, silent and unseen.

In the few seconds before landing, the little buggers raise their flat tails like an airplane’s wing flaps to kick their trajectory upward, then pooch out all four limbs to turn their armpit sails into a tiny parachute, braking their descent to land soft as a whisper on the trunk of a distant tree.

Which sounds like a lot of trouble when you could just take a quick jog to get where you’re going. But ask any flying squirrel, and they’ll tell you: When you are little more than a fun-size snack to a fox, coyote, or hungry owl, it sure beats walking.