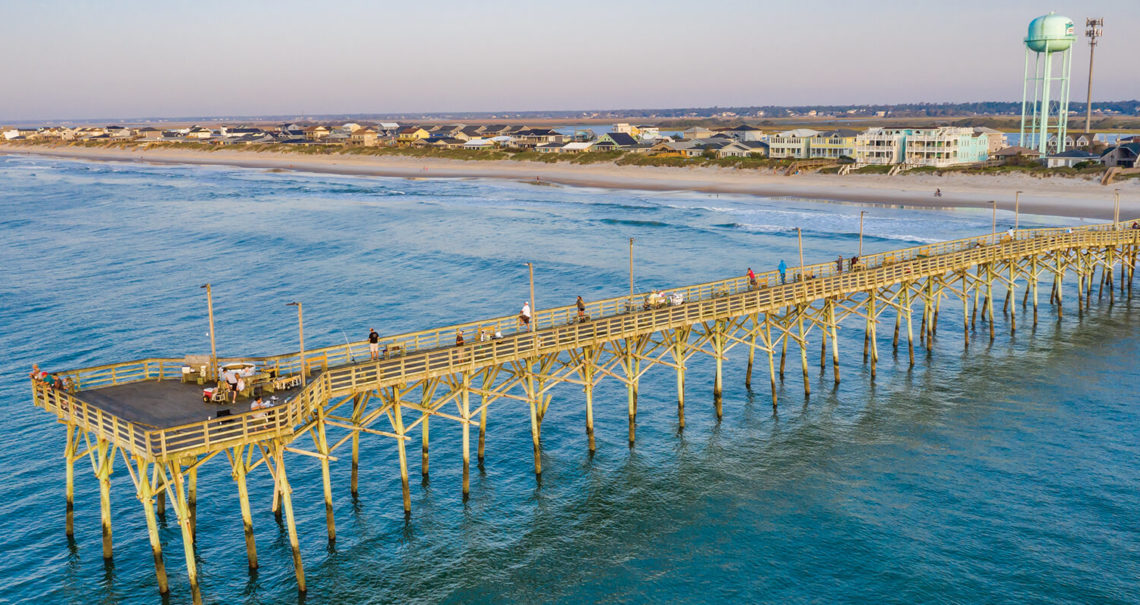 For a long time, the 26-mile barrier island was a secret. For the families who knew about it, Topsail Island was their summer place, one they shared with the military at nearby Camp Davis. Children grew up knowing everyone, picking up shells and shark teeth, and hearing stories of pirates and buried treasure. There are more year-round residents now, but mainlanders still visit Topsail for a vacation with a community feel. Year after year, they return to roller skate, eat fried shrimp, and go to bingo night at the Assembly Building. They come to feel like locals. 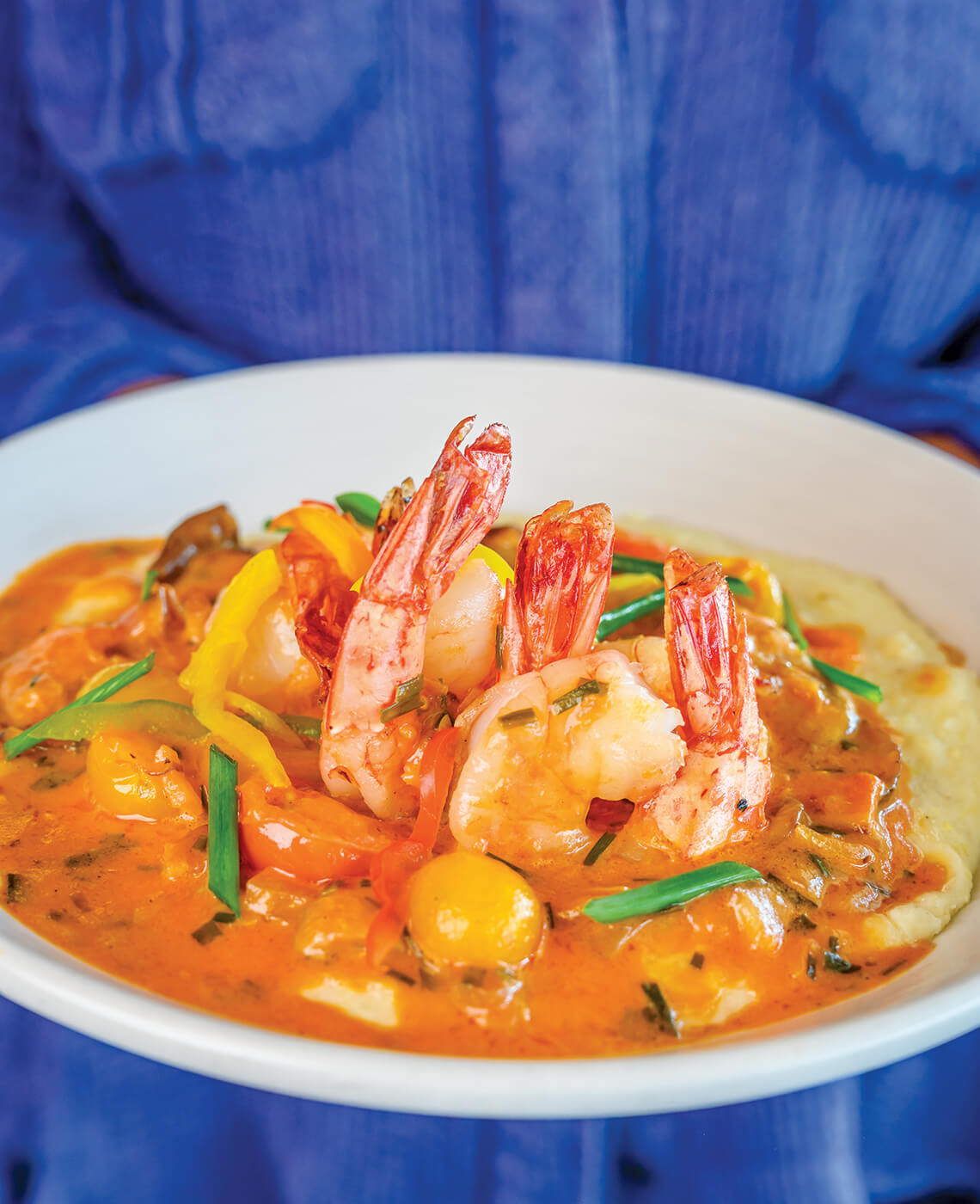 Shrimp and grits at the Beach Shop & Grill. photograph by Emily Chaplin and Chris Council

Longtime residents and visitors to Topsail remember Warren’s Soda Shop, a classic burgers-and-shakes joint that opened in 1952 and later became the Beach Shop & Grill. When Jeff and Cheryl Price bought the place in 2002, they kept the name and the knotty pine ceiling and walls, and transformed the rest into a sleek restaurant with what Cheryl describes as a “fresh Southern” menu — lots of fish entrées and light, fruit-based dishes that change throughout the year. And, always, shrimp and grits . The Prices source as much as they can locally and travel often to bring new ideas back to Topsail. Cheryl, who trained as a pastry chef, creates homey desserts with a twist — like Krispy Kreme bread pudding and peanut butter cheesecake — that surprise and delight visitors, who feel like they’ve uncovered hidden treasure. 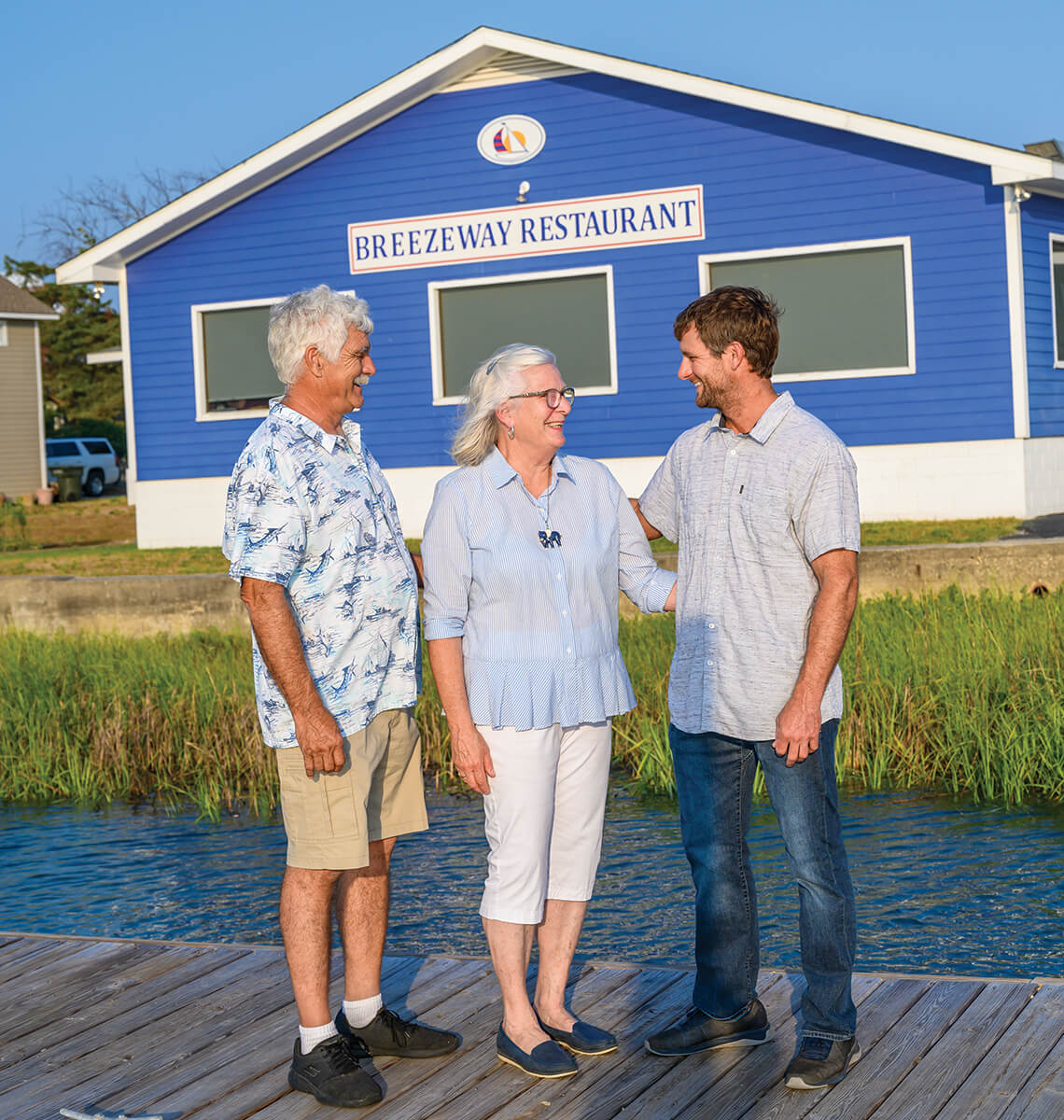 Bill and Kathy Cherry run the Breezeway Restaurant and Motel with help from their son, David. The Cherrys say that the Breezeway is the longest-running restaurant in Pender County — and Bill has the stories to match. photograph by Emily Chaplin and Chris Council

Bill Cherry grew up spending summers on Topsail with his family, roaming the near-empty beaches and riding some of the first surfboards on the island. Bill’s dad knew how much his son loved being on the coast and figured he’d want to stay, so in the early 1970s, he bought the Breezeway — an inn and café opened in 1949 on the site of the former barracks and mess hall for Camp Davis — and put him to work. Now, as owners of the motel and restaurant, Bill and his wife, Kathy, have welcomed generations of families who come for fried seafood, famous hush puppies, Kathy’s Key lime pie, and familiar touches around the restaurant: Bill’s extensive collection of shells and shark teeth. A 300-gallon fish tank, home to Larry the lionfish, who puts on a show at feeding time. And most important, a spectacular view of Topsail Sound. “We have the best sunsets on the island,” Bill says. “There’s not a seat in here where you can’t see the water.” 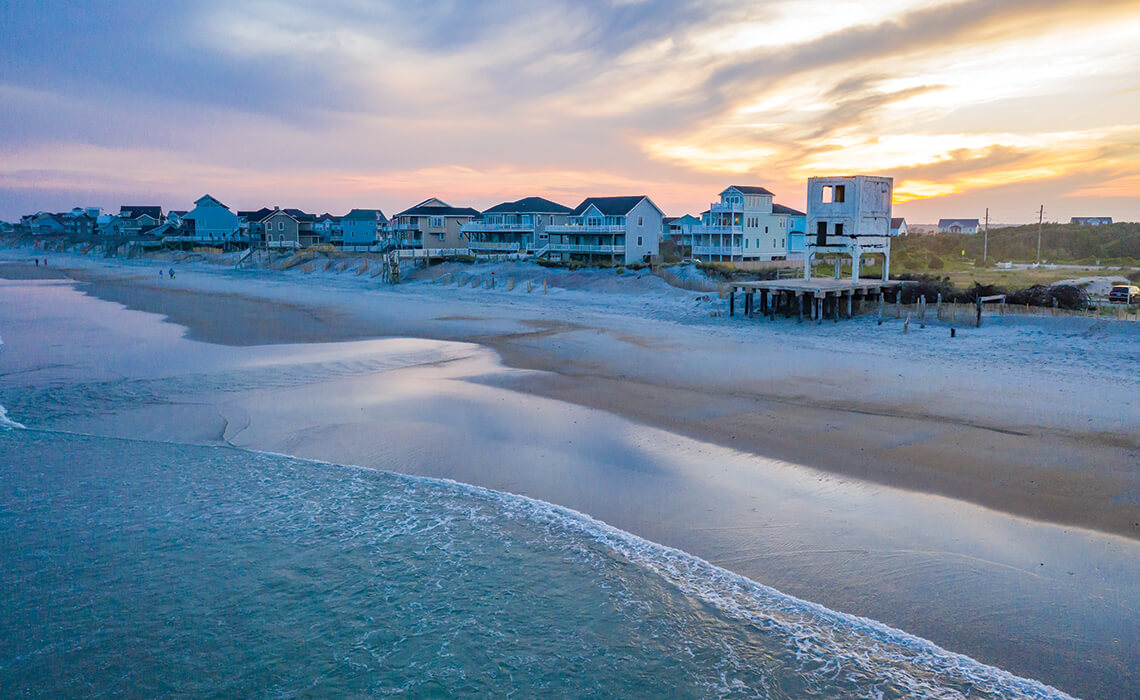 Seven of Operation Bumblebee’s photographic towers still stand. The structures were strategically placed along the island to measure the speed of missiles as they flew past. A few have been converted into beach houses. Tower 6, above, became part of the Ocean City pier in the 1950s. The pier was mostly destroyed by Hurricane Fran in 1996. photograph by Emily Chaplin and Chris Council

There are always questions about the towers. Tall, blocky structures of reinforced concrete, they stand out from the beach houses around them. Just after World War II, the Navy was looking for a home for Operation Bumblebee, a top-secret guided-missile testing program. Topsail Island’s length, sparse population, and proximity to Camp Davis made it the perfect site. Over 18 months, some 200 missiles were built and fueled in a sturdy structure called the Assembly Building, then towed across the street to the launch platform, now the Jolly Roger Inn’s patio. Eight photographic towers measured the performance of the missiles that whizzed down the island. The program moved on in 1948, but the testing done on Topsail laid the foundation for modern jet technology and helped usher in the Space Age. Decades later, the Assembly Building, now home to the Missiles and More Museum, lives up to its name in a new way — as the backdrop for community celebrations. And the truth about Operation Bumblebee, classified for so long, is more than mere rumor. As historian David Stallman put it: Topsail Island is to jet travel as Kitty Hawk is to propeller flight. 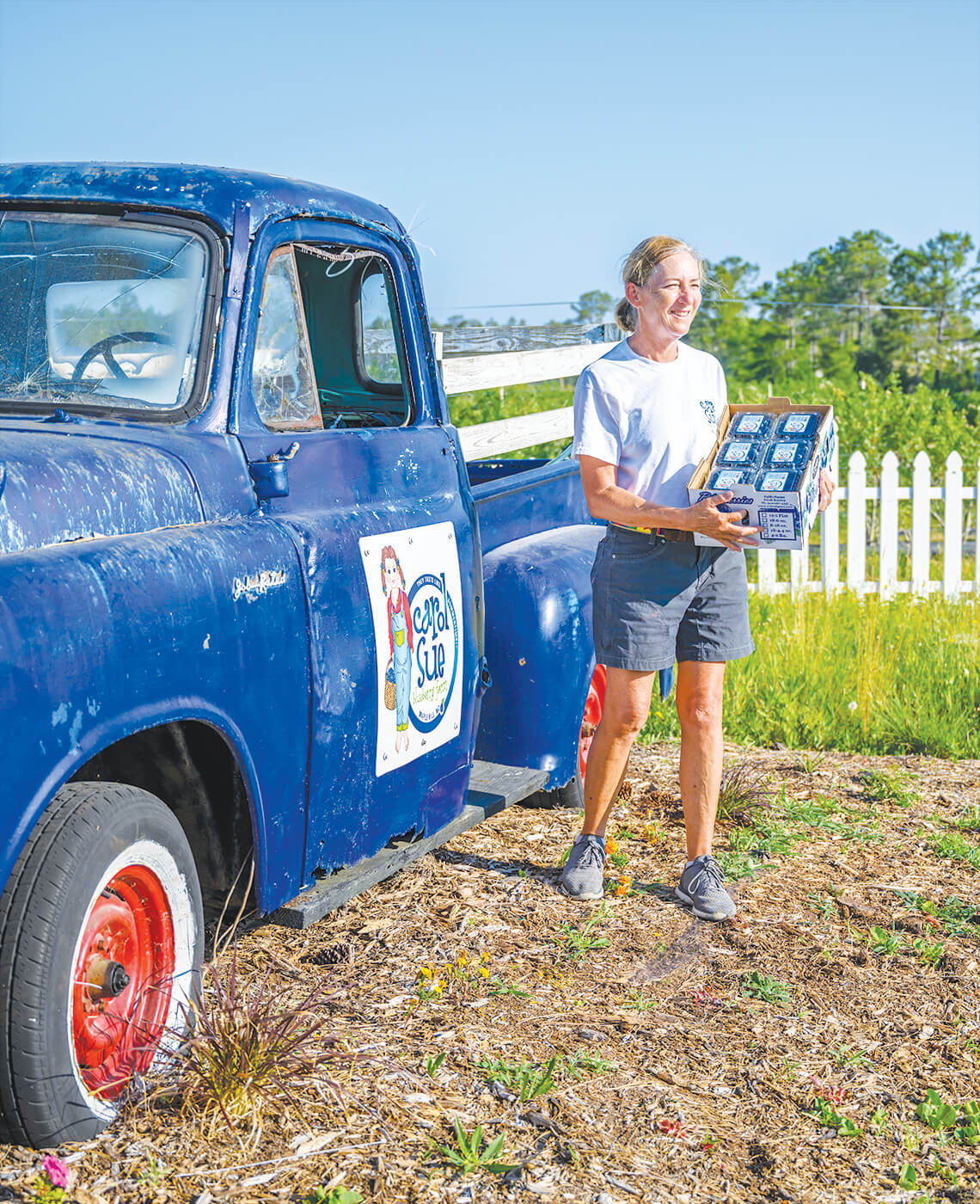 At her family’s roadside stand, Nonie Morris sells pre-picked and you-pick blueberries and strawberries, as well as honey harvested from hives at Carol Sue Farms. photograph by Emily Chaplin and Chris Council

In the early 2000s, Jeff Morris was looking for a hunting tract for his sons when he found a former blueberry farm in Maple Hill. He was working in real-estate development at the time, but he was ready for a change, and blueberry farming suited him: “He just loves being outside, and he loves to work,” his wife, Nonie, says. And it turned out to be a business that their family could grow into — today, the Morrises tend 100 acres of wholesale blueberries on the original farm with their sons, now grown, and run a you-pick farm and roadside stand in Hampstead, not far from the Surf City Bridge. Most summers, families can wander rows of strawberry plants and blueberry bushes together, filling pails for their beach vacation, if they’re heading toward Topsail, or to take home. As for Carol Sue? She was Jeff’s mother, a country girl who loved farming and gardening, Nonie says. “She would be so proud.” 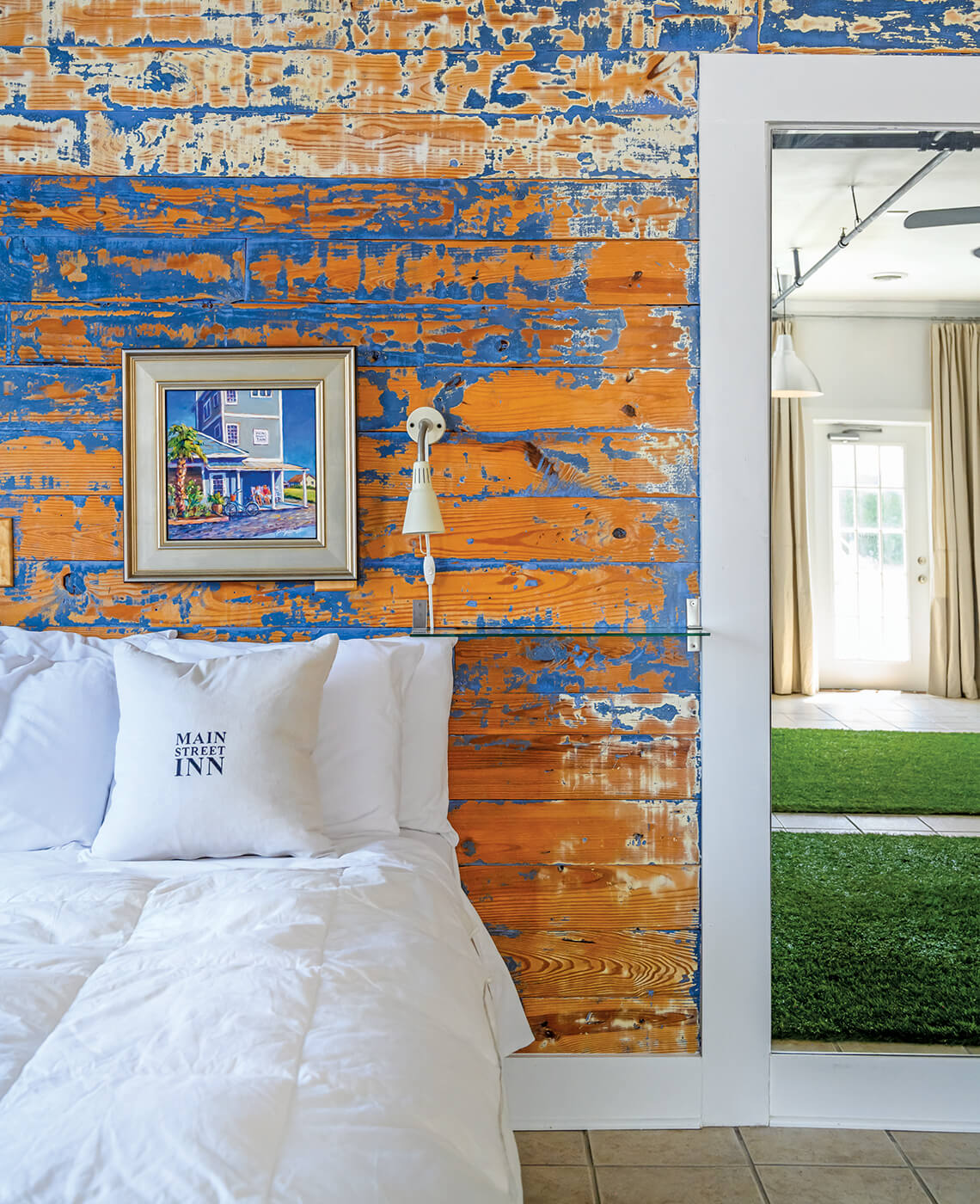 Denise Sanderson could tell that a previous owner had probably used found boards to patch up this wall after a hurricane. She sanded it smooth, and now, it preserves a bit of history in the Shore Suite. photograph by Emily Chaplin and Chris Council

From up in the Sky Suite, on the third floor of the Main Street Inn, you can see the island unfolding in nearly every direction. Although the tower looks like an Operation Bumblebee structure, innkeeper Denise Sanderson explains that a previous owner built it as an homage to island history. The original building, on the left side, was completed in 1957: a handyman’s shop in front and living quarters in back. After Denise bought the building, it took her about a year to restore it and get the four bright, comfortable suites ready for guests. But she’s no stranger to old buildings — she used to own an inn in an 1890s Victorian in Tarboro. “I love preservation,” she says. “I like to be respectful of the footprint of a place.” And she’s delighted to welcome families to the idyllic island where she spent summers growing up. “It’s just a safe place for little children to spread their wings and grow some independence,” she says. “It’s special.” 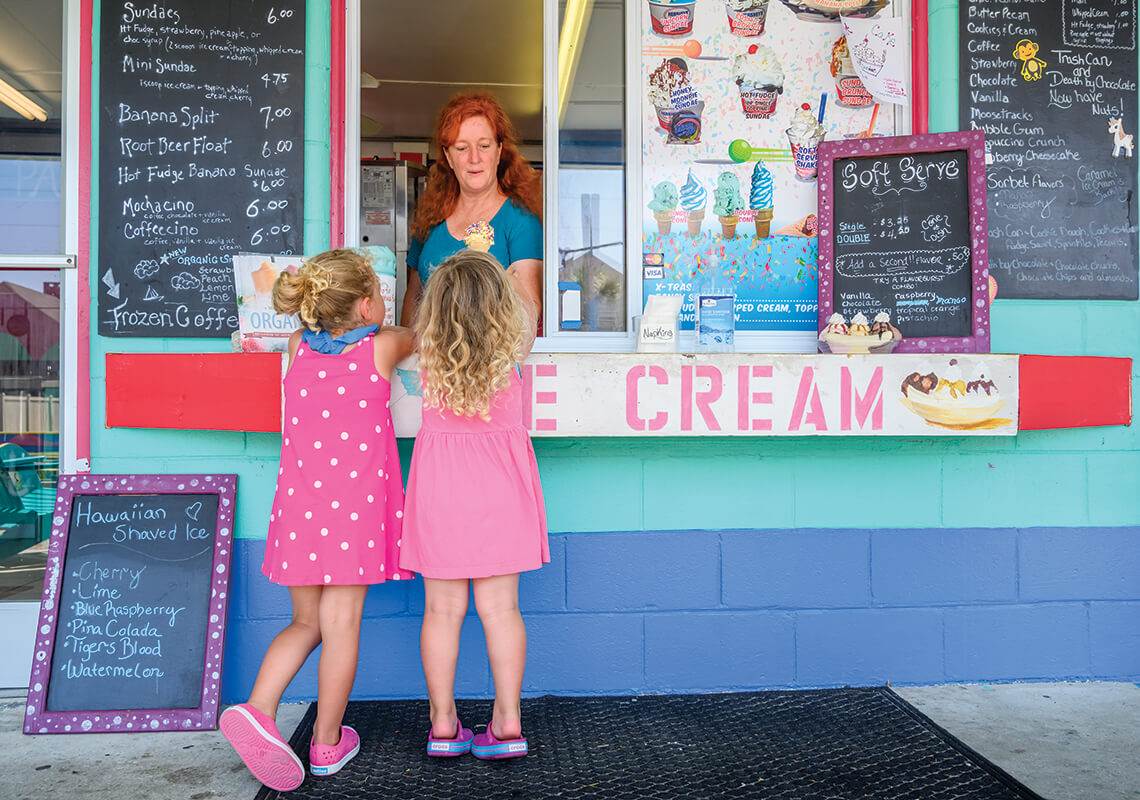 This bright and beachy wonderland opened in 1955 to entertain troops stationed at Camp Davis. When Kate MacDonald bought it in 2013, it was in need of some TLC, so she and her kids worked to transform it, “and it’s been nothing but fun ever since,” she says. From the beginning, she talked to older folks to piece together the original experience: They told her about arcade games and soft-serve ice cream and first kisses on the dance floor. While she didn’t bring back the jukebox, there is a DJ who plays Disney songs or Top 40 hits or beach music, depending on the crowd. “Absolutely everyone dances,” she says, “and they dance while they golf.” When she meets someone who came here as a kid, she quizzes them, then does her best to find or re-create memorable items. “Because if they remember it, that means it was something really good, something tried and true,” she says. “I’m still on the hunt.” 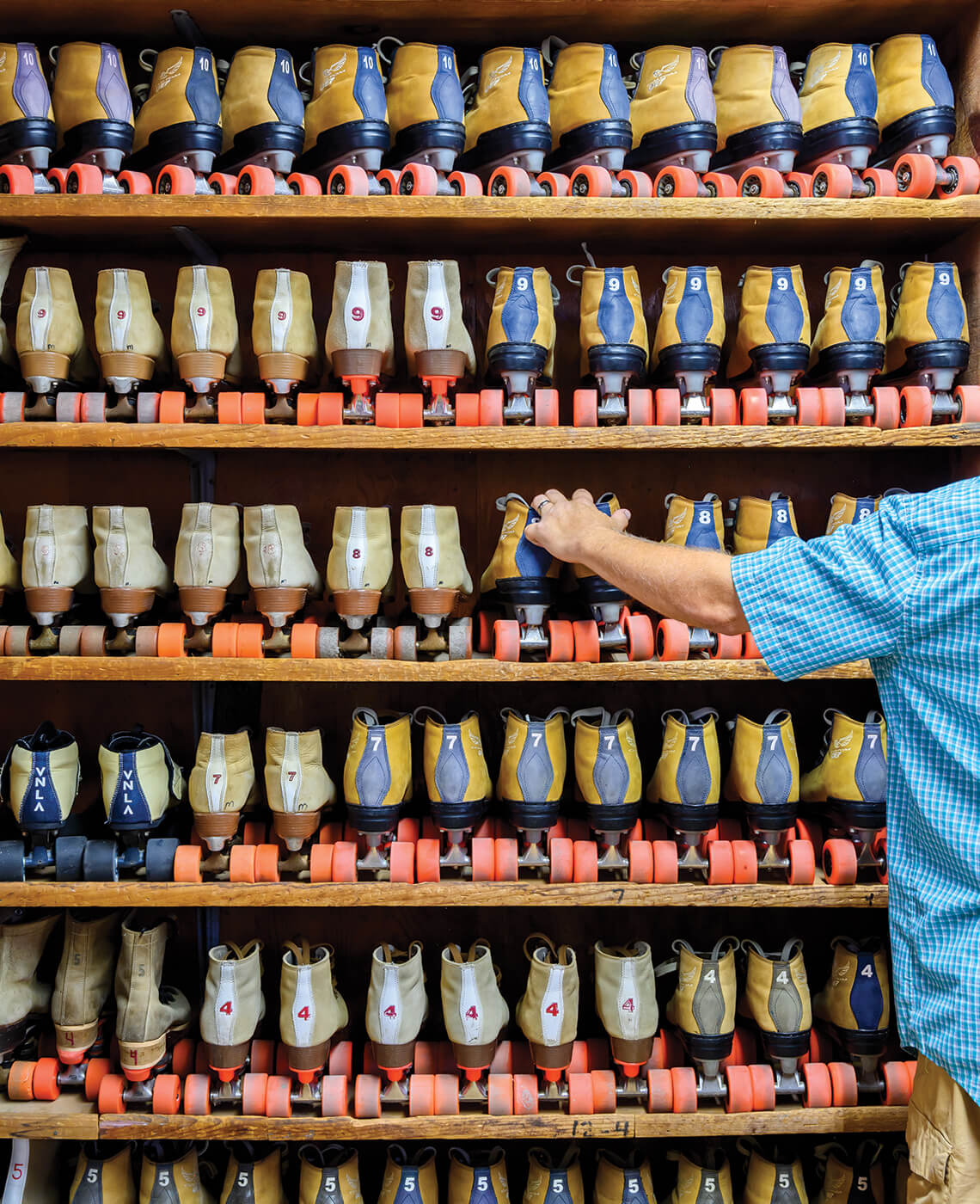 The Topsail Beach Skating Rink has been open since 1964. photograph by Emily Chaplin and Chris Council

By day, Doris Jenkins is the local postmaster. By night, she’s the “skate lady,” owner of the roller rink on the second floor of the post office. She and her husband, Joseph, built the rink themselves and opened for business in 1964. More than 55 years later, Doris welcomes a full house every summer — grandparents and parents and children, many of whom she knows by name. She’s famous for playing music from the 1950s, ’60s, and ’70s on the 45-rpm records that older skaters remember from childhood. Doris, now in her 80s, still laces up her own skates from time to time, gliding across the old maple floors to songs like “White Silver Sands” and “One Night with You.” “I don’t skate nothing fast,” she says. “I call it romantic music because that’s what me and my husband used to skate to.” Under a sparkling disco ball — the same one from the ’60s — the skaters go ’round and ’round.

The original Surf City Ocean Pier was mostly steel. Now, the wooden structure offers ocean views above and a different kind of beauty below — almost like a cathedral. photograph by Emily Chaplin and Chris Council

The fabulous fishing around Topsail, always an important part of the local culture, meant that there used to be many piers on this strip of land — at least nine of them. Now, because of the way hurricanes, fires, and storms have shaped the island, there are just three, one in each town. Surf City Ocean Pier was the first, built in 1948 and purchased by the Lore family in 1973. The following year, the pier was destroyed by a nor’easter, so the Lores rebuilt — then rebuilt again in 1996, after Hurricanes Bertha and Fran. The family holds a special tournament for children, who often cast their very first line off the pier in Surf City, kicking off a lifelong fascination with spot, drum, Spanish mackerel, and other gifts from the sea.

Used to be, you could visit Soundside Park to see the swing bridge open and close for boats. Now, you can catch the sun setting behind the new bridge and enjoy a fishing pier, a playground, and an amphitheater. photograph by Emily Chaplin and Chris Council

For all the ways that Topsail Island has preserved its past, there’s one important thing that’s changed. When the Surf City Swing Bridge was completed in 1955, it was an invitation to the quiet island. The bridge wasn’t perfect — traffic was stopped on the hour so that it could swing open for boats, and local drivers knew to plan their outings accordingly. But as the gateway to vacation, it was beloved: For six decades, the roar of tires on the old concrete-and-steel structure signaled to families that they were back on island time. As the bridge reached the end of its long life, the state made plans to replace it with a soaring new high-rise affair that would carry cars 65 feet up and over the Intracoastal Waterway, with plenty of room for boats beneath. A tribute to the old bridge remains in Soundside Park, where a wooden replica along the boardwalk recalls its iconic seafoam-green steel trusses — almost like the ones you remember.