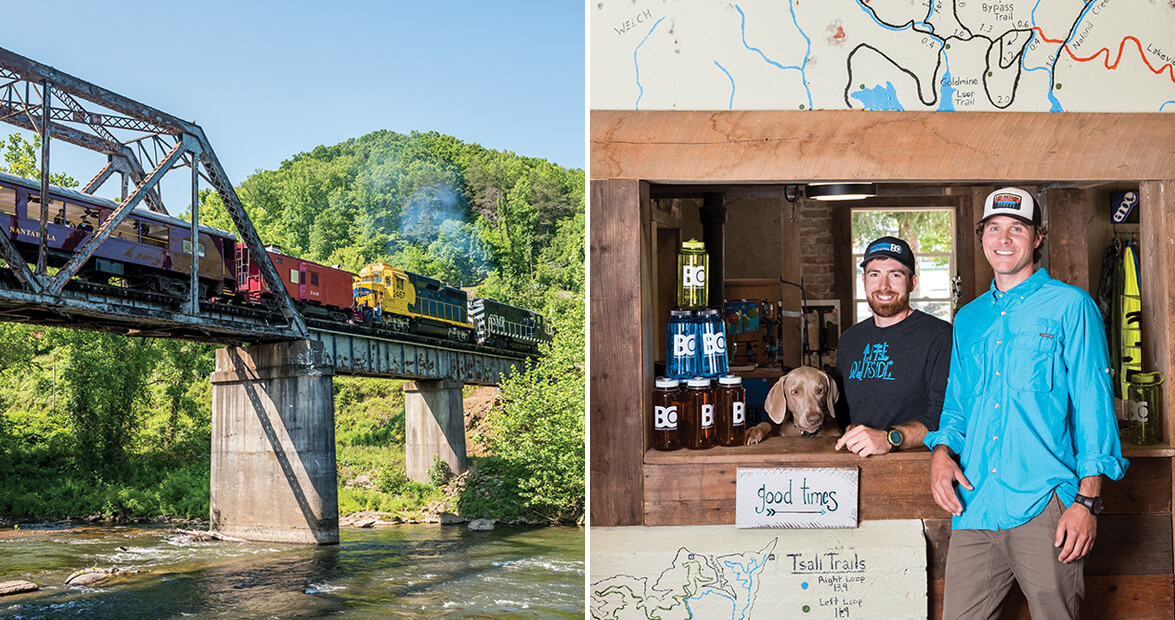 There’s a chill blowing off the Tuckasegee River. Fog hangs over distant mountains, as if it’s the visible exhale of the forest’s green lungs. A man gets out of his car and stretches his arms overhead before walking to a Bryson City riverbank, fishing pole in hand.

He approaches a ledge of crushed metal, salvaged automobiles that were stacked along the river in the 1950s and ’60s to prevent erosion. It was an experimental recycling practice used on waterways across the country, and Bryson City has what some experts consider to be the best standing example. Along sections of the Tuckasegee, banks are held in place by cars that look like they’ve been transplanted from a classic drive-in movie theater. Chrome fins and side-view mirrors point downstream. The vehicles have been partially buried, turning the riparian zone into a slice of odd layer cake: jewelweed growing between flattened Fords and river water.

The fisherman steps onto the hood of a rusty sedan and casts his line. Almost immediately, it’s taut. With nearly a single motion, he slips a silver trout into the bag slung over his shoulder. 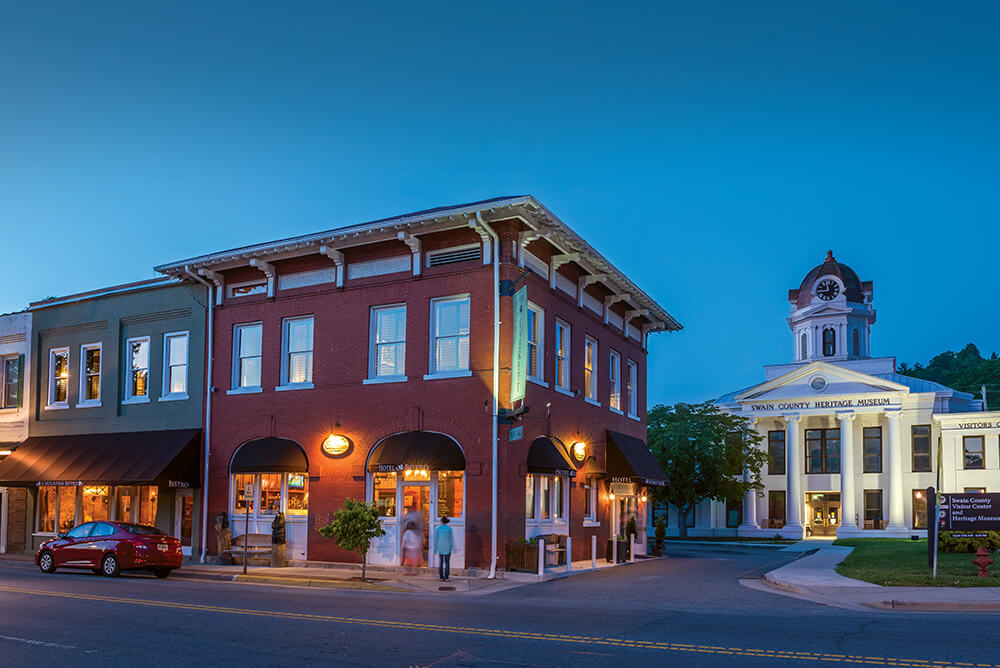 The Tennessee Valley Authority altered the Tuckasegee when it built the dam that created Fontana Lake in the 1940s. Many communities in Swain County were forced to move before the area was flooded — gone were homesteads, schools, and bridges. Hundreds of the displaced moved to Bryson City. For some residents, the river still triggers stories of lost apple orchards and family cemeteries that can no longer be visited.

Bryson City, a town of roughly 1,400 year-round residents, has a long memory.

Dale Collins is watching the fisherman from a boat he purchased last year, soon after he and a partner opened the Tuckaseegee Fly Shop. (This river of many moods may show up with an extra “e” in its name.) Theirs is the first brick-and-mortar fishing outfitter to serve downtown Bryson City in more than a decade. “Fishing is a way of life, part of Appalachian culture,” Dale says. Even so, some of their clients are walk-ins who’ve never untangled a reel or tied a fly. Regardless of experience, he says, “it’s always an honor to get people out on the water.”

This is where the warring river begins. But where does it end?

He drops anchor and inhales the smell of loamy earth. A mayfly floats above his head, delicate as a dandelion puff. Lulled by the sound of water moving over stone, Dale’s quiet thoughts are interrupted by the whistle of a Great Smoky Mountains Railroad train, tracing the river’s edge.

The fog is starting to burn off, but Dale isn’t sure how long he’s been on the river. “Around here,” he says, “time flows a little bit differently.”

Ashley Hackshaw was leaving Bryson City when she realized she wanted to live there. She was on a plane returning home when the captain of the overbooked flight asked if anyone was headed somewhere they didn’t want to go. Many people on the flight, including Ashley, raised their hand. Everyone laughed. But for Ashley, it wasn’t a joke. At the time, the Wake Forest University graduate and former investment banker was living in California with a lifestyle many would envy, but at a frantic pace. And in that moment, she knew she didn’t want to go back to any of it.

“Thank you, Captain,” she wrote in her journal, and later on her blog, Lil Blue Boo.

A series of personal challenges had left Ashley questioning her definition of the American dream. In 2011, she’d unexpectedly lost her father to a heart attack. Soon after, she was diagnosed with a rare form of cancer that required surgery and rounds of chemotherapy. She’d been stripped to the core, physically and emotionally. 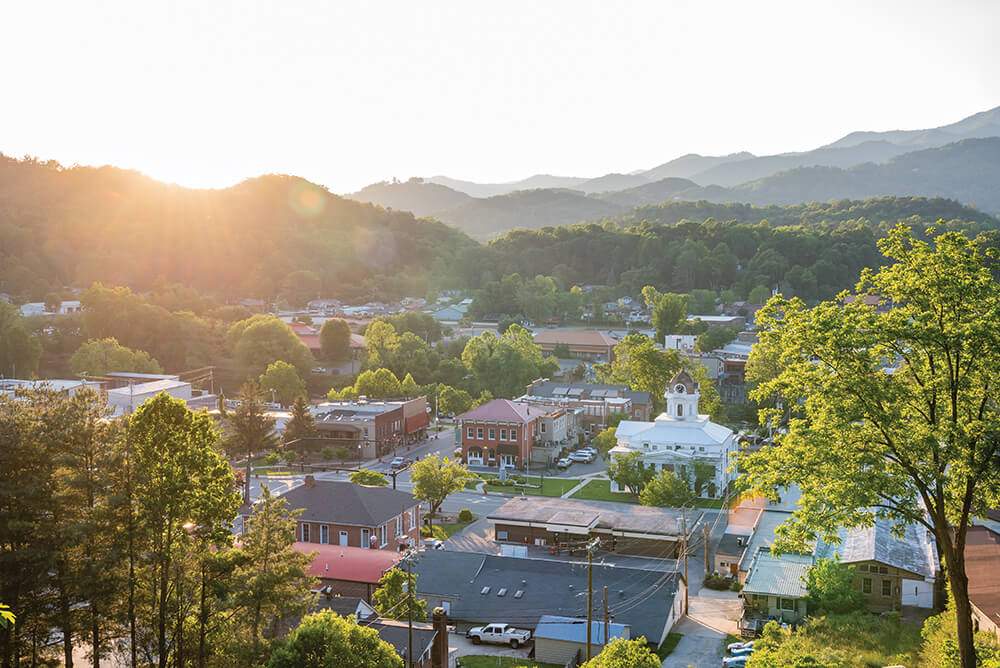 So, where did she want to go? The answer was immediate: Bryson City.

Ashley had visited Bryson City’s Hemlock Inn as a child with her family, and she remembered it as a place where her busy father always had time for river explorations. Being in the mountains had fostered a focus on what was important, and Ashley wanted to introduce her young daughter to a place that felt like a refuge from consumerism.

In the months following that fateful plane trip in 2013, Ashley and her family came to a decision: They would move to Bryson City, and she would be the writer-in-residence at the Hemlock Inn. Soon after, she and her husband sold their house and almost everything they owned to move across the country.

The Hackshaws lived at the Hemlock Inn for six months, and in that time, at least 100 guests spent the night there because they’d read Ashley’s blog. Horace Kephart, the writer famous for his role in the founding of the Great Smoky Mountains National Park, lived in Bryson City, but Ashley is its reigning scribe.

She remembered it as a place where her father always had time for river explorations.

She writes from a ranch-style house, which overlooks downtown from behind the Nantahala Brewing Company. The house is full of found art and thrift-store furniture, and there’s a relocated train-depot-turned-chicken-coop in the yard. When she decides it’d be nice to have corn for dinner, she jumps into her refurbished 1982 Chevy — affectionately known as Ruby — and heads toward Darnell Farms’ produce stand on the Tuckasegee. She cranks the windows down, since Ruby doesn’t have air-conditioning. (Ashley bought the truck because its lack of electronics makes it easier to fix herself.)

Afton Roberts, daughter of the farm’s founder, sees Ashley coming and points to a refrigerator. “I got some grape Nehi, because I heard you mention it last time you were in here,” she says.

“My favorite!” Ashley says, popping the top off a cold bottle.

Afton points out her brother, who’s working a row of tomatoes in a nearby field. “He’s in a stage of making his own clothes,” she says. “He’s out there in a shirt he made last night.” 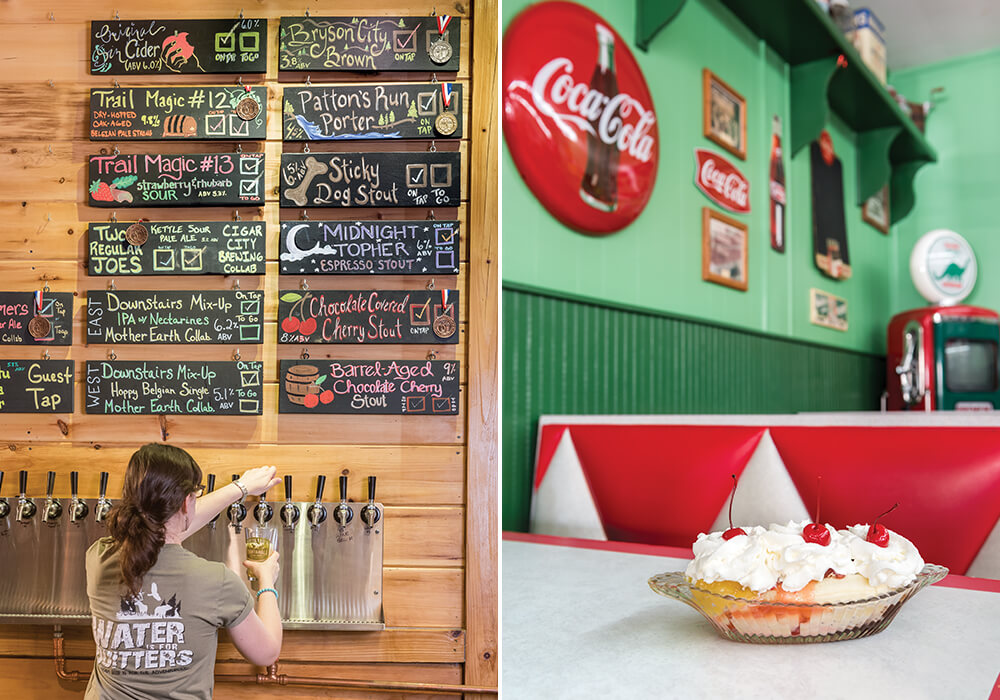 Part of Ashley’s success as a blogger comes from DIY projects, and living in Bryson City — where folks still drink medicinal tea made from roots gathered along the river — is like living in the DIY capital of the world. “Good for him,” she says. “Not many people are self-sufficient anymore. Except around here.”

Locals and visitors have been known to idle whole afternoons at Darnell Farms, lolling in the grass, eating peaches, watching one of the more rugged sections of the Tuckasegee roil. Recently, on a high mountain hike, Ashley felt like she was witness to the river’s birth. The scene seemed as magical as Narnia — mist condensing on moss, trickling onto stone, gathering strength. She thought to herself: This is where the warring river begins.

But where does it end?

To find out, Ashley guides Ruby around hills, past an old farm that inspires her to shout above the wind whipping through windows: “I love that house! I love those silos!” A few miles down the road, she brings Ruby to a sudden halt and points to her left, toward the Tuckasegee.

There, between the river currents and the gathering waters of Fontana Lake, is a swath of stillness just a few feet wide. It’s an ending and a beginning, the visible confluence of past, present, and future. If you’re brave enough to leap, you can even swim in it. 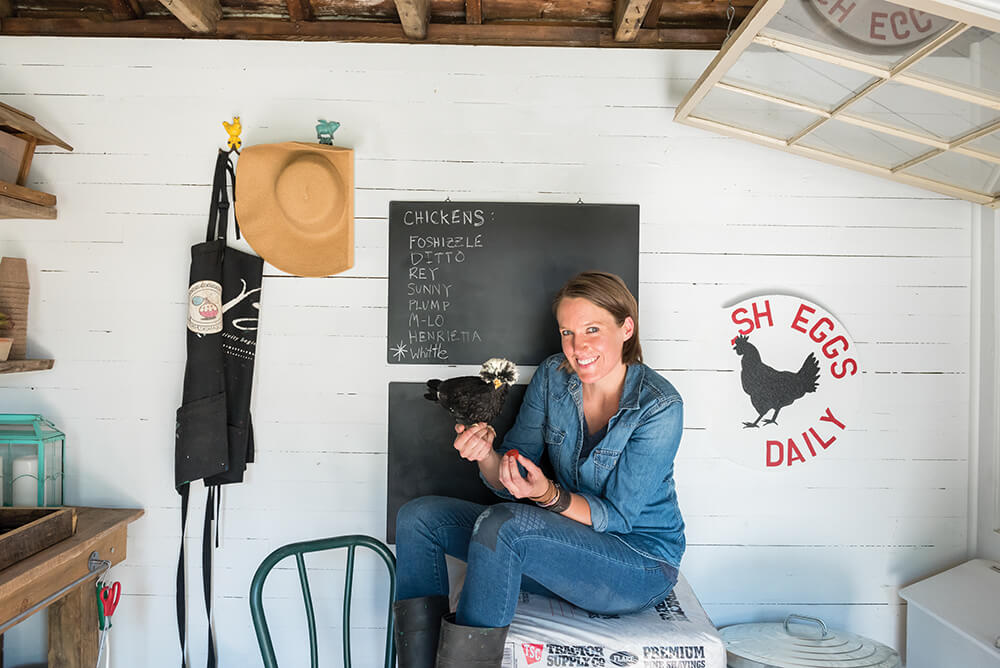 Ashley has made a career out of noticing things like this and sharing them on her blog. They’re atypical tourist attractions that might otherwise be overlooked: A “See Rock City” barn blanketed in kudzu, the Chinese-born ginkgo tree planted downtown in 1940, rusty bottle caps found in Bryson City parking lots and arranged on linen.

She often finds her treasures by happenstance. “I like to wander. When you see someone walking around in the woods or along the river here, they don’t ask what you’re doing. They just say hello,” she says. “In Bryson City, I always feel like I’m exactly where I’m supposed to be.”

There, between the river currents, is a swath of stillness just a few feet wide.

The Tuckasegee is as omnipresent in Bryson City as the sound of train whistles. But the water isn’t always easy to reach. One of the only river-bound stairways downtown is behind Bryson City Outdoors. The store — founded in 2013 by Ashley’s husband, Brett, and lifelong local Ben King — offers outdoor gear in a town that doesn’t have a Walmart. It’s located in a former pawnshop that’s been retrofitted into an inviting space with exposed brick and wooden beams. Out front, there are hammocks for lounging.

Ben’s grandmother told him stories about family members who’d lost property when the dam was built. The town is haunted by a history that was swallowed by water. But he’s noticed a growing interest in what the currents of the Tuckasegee might bring to Bryson City’s new generation. “Until recently, the river was an underutilized resource for recreation,” Ben says. “I’d like to see this known as a river town, and we’re moving in that direction.” 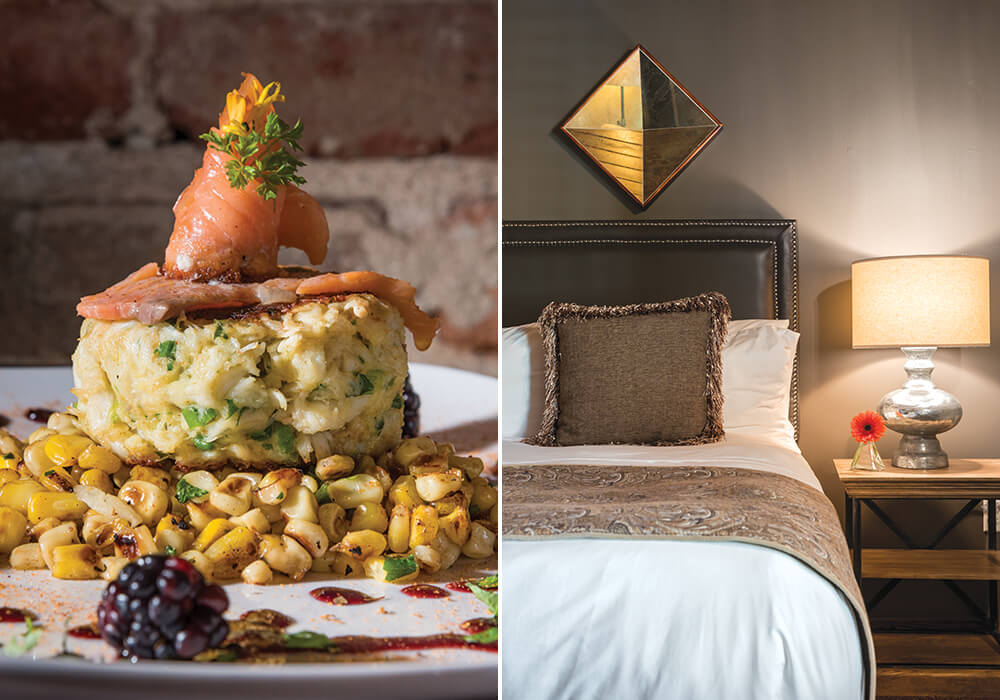 Crab cakes are served with seasonal flair at the Cork & Bean Bistro, located in The Everett Hotel (right) downtown. photograph by Emily Chaplin

Around sundown, Ben and Brett set out for a walk. What good is having your own business if you don’t take time to watch the resident blue heron make his evening flight through town? Brett, like Ashley, is a former investment banker, but his new personal motto is: community over commerce. “Money isn’t the most important currency here,” he says. “The most important currency is time, family, and community. And that’s really cool.”

Bryson City is a haven for people who, in an increasingly distracted world, yearn to connect.

Scott Mastej, one of the owners of The Everett Hotel — a renovated bank that uses the former vault for wine storage — cracks a door to wave as the two men pass. This once-rustic town has clothing boutiques and — in The Everett Hotel’s Cork & Bean Bistro — fine dining. But Brett thinks visitors are also drawn to the town’s more subtle attributes. “Go to the coffee shop here and nobody’s on their cell phone,” he says. “Go to a coffee shop in Charlotte and almost everybody’s on their cell phone.”

Bryson City is a haven for people who, in an increasingly distracted world, yearn to connect. As Ben and Brett cross a bridge over the Tuckasegee, three of their friends appear below, standing on paddleboards. For a few minutes, there are men leaning over the flowerboxes that line the bridge, and men looking up from the water. It’s the Bryson City version of neighbors chatting over a white picket fence. “It used to be rare to see people out on the section of river that runs through town,” Ben says. “But not anymore.”

Sometimes, Brett thinks about how the vehicles fortifying the town’s riverbanks are like the sunken ships that become the framework for new coral reefs. “This is small-town America. You use what you’ve got,” he says. “It doesn’t have to be perfect when it’s genuine.”