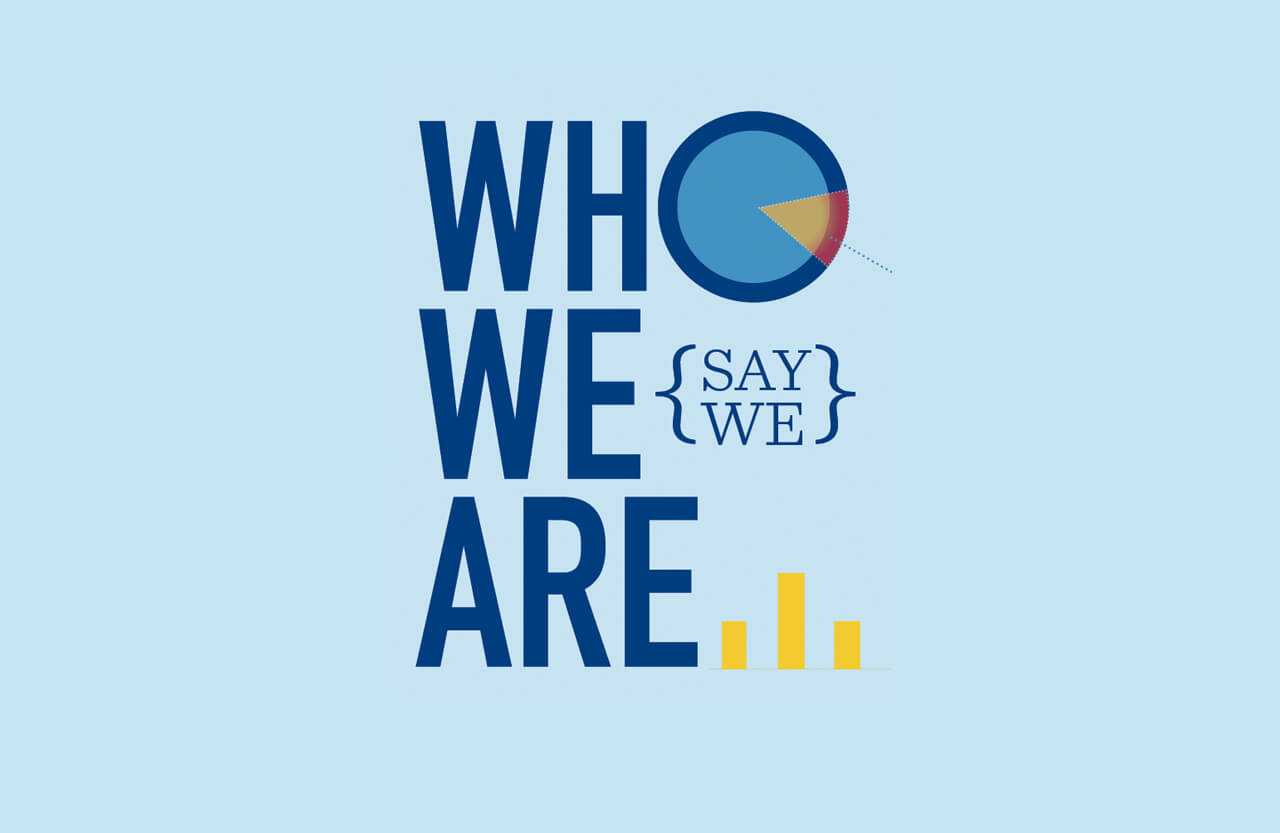 You are unique. Your parents always taught you that. You’re special. You’re one of a kind. There’s no one out there quite like you.

That’s true, and it’s not. Yes, there’s no one quite like you, but there are a lot of people who are somewhat like you. That’s math. Take, for example, the well-known probability theory known as the birthday problem. It goes like this: If you put 23 people in a room, there’s a 50 percent chance that two of them will share a birthday. When you increase that number to 70, the probability of two people sharing a birthday jumps to 99.9 percent. You don’t need that many people to get together before similarities start showing up.

We’d all like to think that we’re the kids of parents from Lake Wobegon, but thanks to demographics, there are ways to tell whether we’re actually above average. Does your family bring in more than $46,460 a year? Great! You’re above average in North Carolina. Does your drive to work take longer than 23½ minutes? Once again, you’re above average here (although maybe congratulations aren’t in order).

Those are just numbers. They don’t show us a sense of community. North Carolina is Southern. It’s got barbecue and NASCAR and red clay and Billy Graham. It’s got mountains and beaches and the Piedmont and the Sandhills. North Carolina isn’t a mash-up of numbers. It’s a place. There’s no place like it.

And yet, there are a lot of places like it. Texas has barbecue. Georgia has red clay. And NASCAR? Even California has NASCAR now. If you measure North Carolina by the things we have, you start finding that other states have them, too.

Places, though, are nothing without the people in them. And people? We’ve got people. In 1900, a mere 1.9 million people lived in North Carolina. Today, more than five times that number live here. North Carolina added some 1.9 million people in the past 15 years alone. Where do they come from? Virginia, Florida, South Carolina, and Georgia, mostly, according to the Internal Revenue Service, which tracks year-to-year changes in addresses on tax returns. But there are also significant numbers of people coming from nearly every state in the union. In all, more than 234,000 people moved here from another state in 2010-2011. It’s astonishing. People are leaving where they’ve always been, and they’re coming to where we are.

But what does it mean to be from North Carolina? Is it the Southern accent? In the poll, 58 percent said yes, they have one, whereas 39 percent said no, they do not think they speak with an accent (3 percent weren’t sure). Yes, the accent, that twang, is a part of who we are. But although accents are in the majority, they don’t have the overwhelming mandate you might expect.

So is there something that unites us? Certainly not political affiliation, which, despite the Republican majorities in the General Assembly and our Congressional delegation, tends to lean Democratic when you look at voter registration. Certainly not barbecue: The Elon Poll showed 48 percent preferred eastern-style over Lexington-style (34 percent), and 17 percent didn’t like either one, or didn’t have a preference. Even Billy Graham, the legendary evangelist who was born in Charlotte and barnstormed around the country with a Bible and a message, the man who was listed as the most admired, only came in with 7.5 percent of the “most admired” vote.

The historical definition of a place, the thing that unites us, has been geographic. Surveys in the 1700s defined the colony that became a state, and North Carolinians have been living within those borders ever since. The lines have moved slightly during the past 300 years, but the people within them have changed a lot. Even within North Carolina, there are regional differences. The Carolina Population Center at the University of North Carolina at Chapel Hill tracks the trends. In Duplin County, between Fayetteville and Jacksonville, nearly 1 in 5 people is Hispanic. Six counties in the East have a majority black population, whereas three counties in western North Carolina have fewer than 100 black residents. North Carolina is many things, but it isn’t the same from one side to the other.

There are lots of things that we think we know about North Carolina. There are traditions that we have here. There’s history. And yet, there is so much that’s new. So let me see if I have this right. North Carolina is a place with people who have a lot in common, yet are becoming more diverse, and different. If that seems like a paradox, it’s not. It’s home. 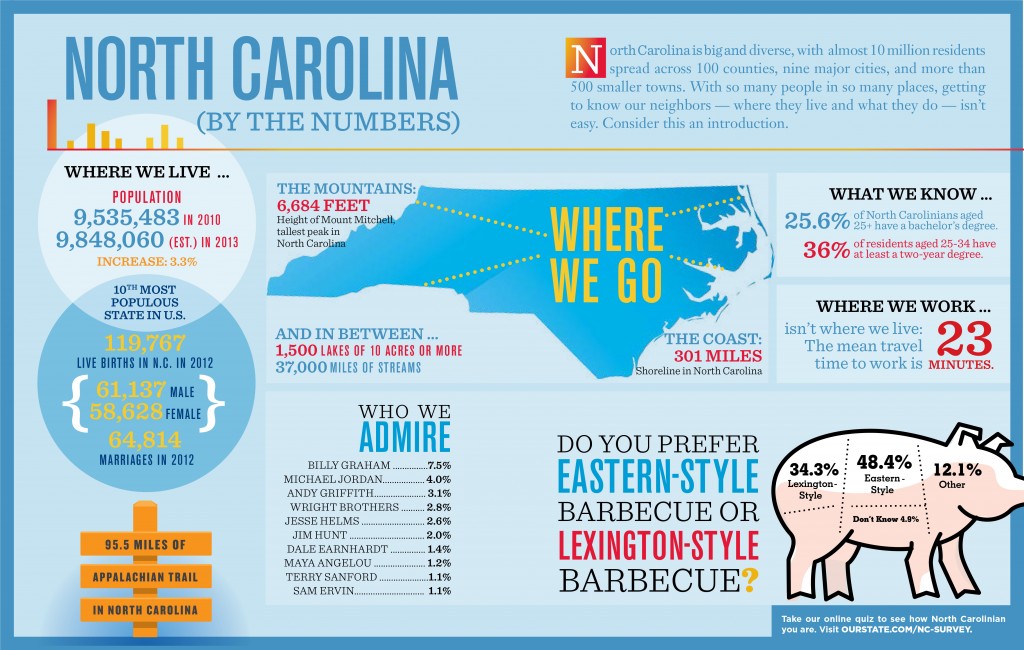 Home isn’t always so much a physical place as it is a state of mind. We start constructing things in our minds based on our memories, and if we’re not careful, those constructs become stereotypes.

Take, for instance, NASCAR. Stock car racing is one of the few sports that has practical roots. If you ask someone, they’ll tell you the well-worn stories. Prohibition. Moonshine runners. Fast cars. Junior Johnson.

At some point, drivers stopped outrunning deputies and started outrunning each other, and NASCAR was born. The France family nurtured it from the beach at Daytona to the short track in North Wilkesboro to the superspeedways in Charlotte and Talladega. It was born, cultivated, and grew deep roots in the South, and North Carolina was its beating heart. Race teams moved here. This was home. And the assumption, the stereotype, is that most people here are NASCAR fans.

The Elon Poll shows that only 1 in 4 North Carolinians is a NASCAR fan, and that only 40 percent have been to a NASCAR race. This fact seems dire — in the face of declining ratings and more empty seats at tracks, this seems to be a counterpoint to people who say that NASCAR needs to bring more races back to the South. After all, after only two years, NASCAR decided not to hold a third truck race this year at Rockingham, a heritage NASCAR track.

But there’s another way to look at the statistic: In an era when our attention is so fractured, getting 25 percent of North Carolinians to be fans of anything is actually an accomplishment. If you draw those numbers out, nearly 2.5 million people in this state are NASCAR fans. That’s impressive. NASCAR has come a long way since it was fueled by white lightning. It’s grown from a sapling into a big tree, but its roots still run deep.

The interesting parts, the ones we tend to focus on, are the outliers. One person, when asked by the Elon Poll where they’d like to take a visitor, responded with Red Lobster. Another person, when asked to describe North Carolina, said “come on down.” These people I like. Most people aren’t ready for such big, broad questions. They might as well ask someone what they like about living — not living in North Carolina, but just living — and then sit back and wait for a good answer. You’re probably going to get a lot of people saying “It’s better than being dead.” Because, you know, it is.

The No. 1 word people used to describe North Carolina was “beautiful.” Think about that. It’s true. It is beautiful here. But what does beautiful mean? Is it nicer than where you come from? Is the place where you live beautiful? Something can only be beautiful if something else is not beautiful. So where’s that? What about those people?

And so, a simple answer to a question leads to more questions. Why do people say what they say? Are they trying to impress the questioner? Do they want to be positive? Do they want to be honest to a stranger, without repercussion? What does it mean if there is more of one thing than the other? Is that a sign? Should we change what we do because of it?

That’s the beauty and the danger of polls. You get data, but it’s what you do with it that makes the difference.

The answers aren’t always sexy. Kenneth Fernandez, an assistant professor of political science who also runs the Elon Poll, says the answers seem to be more moderate than you might expect. Maybe it’s because moderate doesn’t mean loud. The people at the extremes tend to be the loudest, and thanks to Facebook and Twitter, they have platforms they never used to have. But most people’s opinions tend to be somewhere in the middle. As people move here and mix with those who are from here, we all get more Southern and less Southern at the same time. North Carolina keeps moving to the middle. 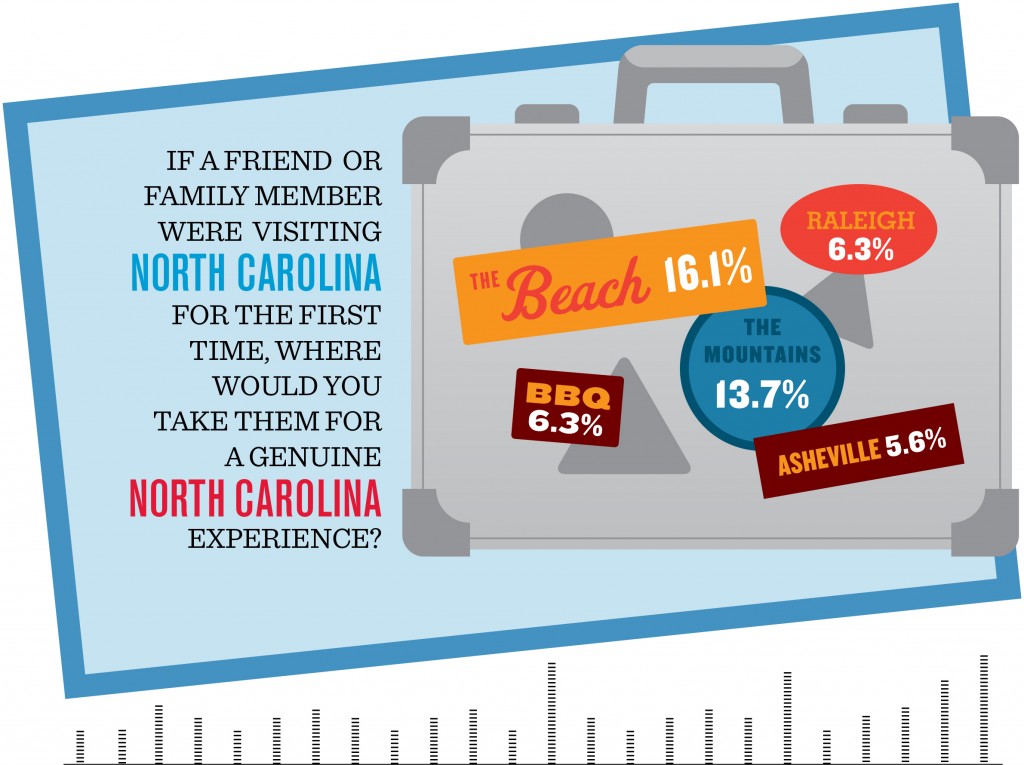 Which makes another question from the Elon Poll all the more interesting: If a friend or family member were visiting North Carolina for the first time, where would you take them for a genuine North Carolina experience? Sixteen percent said the beach. Thirteen percent said the mountains. The rest of the answers seemed to reflect the extremes. The big cities. Asheville. The Outer Banks. The Blue Ridge Parkway. What we consider genuine isn’t the middle. It’s found at the edges. 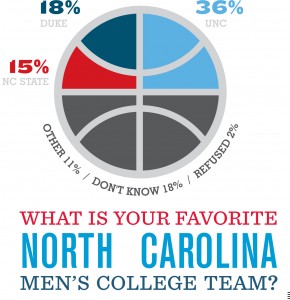 There’s a movement afoot called “Brand NC,” and the state’s Department of Commerce wants to use it to come up with a snappy way of conveying all North Carolina has to offer in just a few words. Brand NC rolled out a “Go NC it!” campaign this summer, but its success remains to be seen. For every popular “what happens in Vegas stays in Vegas” catchphrase, there are a million “Prosperity through Progress” slogans that fall flat.

But that’s the trick. Boiling down the essence of something into a tasty broth is a near-impossible task. And that’s what’s facing the people at Brand NC. Sure, you occasionally see things like “Variety Vacationland” on refrigerator magnets and postcards, but something more permanent has been elusive. “Virginia Is for Lovers” and “INY” end up on T-shirts. “First in Flight” ends up on license plates.

Figuring out what North Carolina is, then, is a tough task. Maybe we need to look at the state motto: Esse quam videri. To be rather than to seem. We are beautiful. We are diverse. We are what we are, and not always what we seem to be.