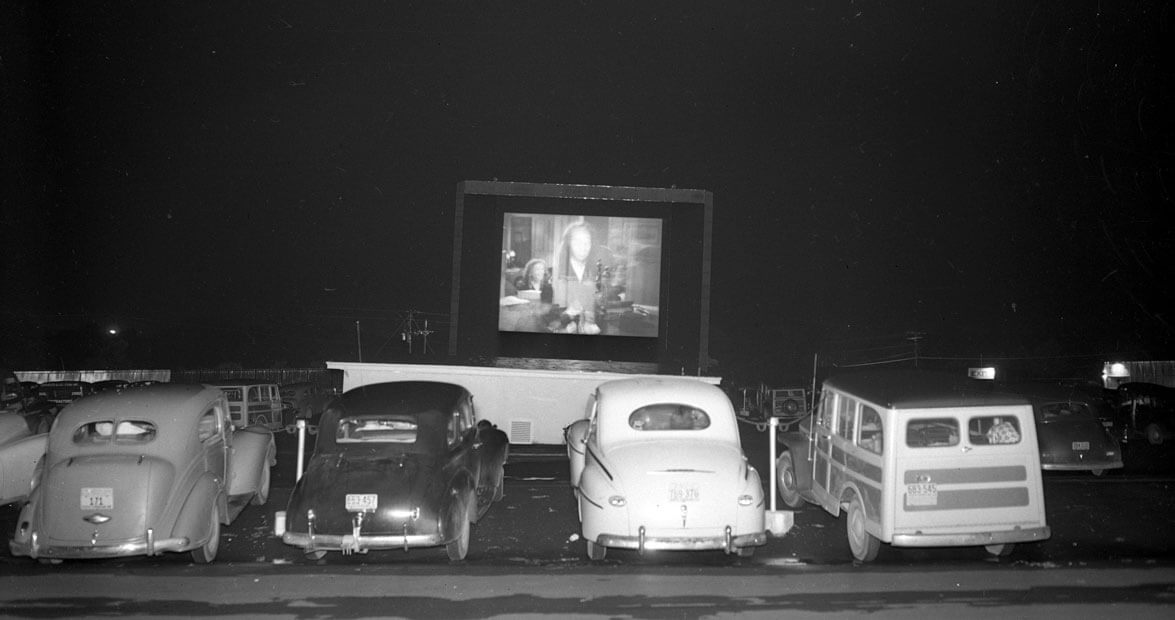 The automobile becomes the signature vehicle of the decade. Not the farm trucks and drab sedans of the 1930s, but long, sleek cars with wraparound windshields, fat whitewall tires, and jet-age tailfins — in colors like Chadron red, Vienna blue, and Safford cream.

In the same issue, Lee Motor Sales, Inc., invites the public to “come meet the 1951 Kaiser … Tomorrow’s car … Here Today!!” And Parker Motors announces, “Now that our production lines are rolling again, we’ll soon be able to show you the finest Chryslers and Plymouths in all our 25 years.”

No longer rationed to support the war effort, gasoline costs about 20 cents per gallon.

In 1950, the average family car costs more than $1,500 — at least 40 percent more than the average annual income across the state, whose population numbers just more than four million. More than a third of North Carolinians are now classified as “urban” — and that rises to almost 40 percent by the close of the decade.

Racing “stock cars” on dirt tracks has been a popular, thrilling pastime in the western Piedmont since the 1930s, and now the family car takes on a romance of its own, a marriage of speed and luxury. No longer is the automobile just a means of transportation — it becomes both a status symbol and a shared adventure. Being in the car — cruising highways and country roads — is a pastime unto itself.

The new Eisenhower administration rolls out an ambitious plan for a national highway system connecting East Coast to West, the far North with the Deep South. Three of these new interstates, I-85, I-95, and I-40, advance into North Carolina. Soon, drivers are speeding along hundreds of miles of four-lane freeways. Meanwhile, under Gov. W. Kerr Scott (“Go Forward with Scott!”), the state builds 12,000 miles of new farm-to-market roads and upgrades another 15,000 miles for all-weather travel.

And two new phenomena seem to bloom out of the landscape overnight: drive-in movie theaters, like the Moon-Glo Outdoor Theatre in Henderson and the Sunset Drive-In in Shelby, and drive-in restaurants, like Bar-B-Q King in West Charlotte and Short Sugar’s Pit Bar-B-Q in Reidsville. Unlike the chains springing up across the country, the local places tend to serve homegrown favorites. Families drive the freshly paved highways in spruce green Buick sedans and Wedgwood blue Ford station wagons to park and eat, to park and watch, comfortably relaxed on “sofa wide” seats. 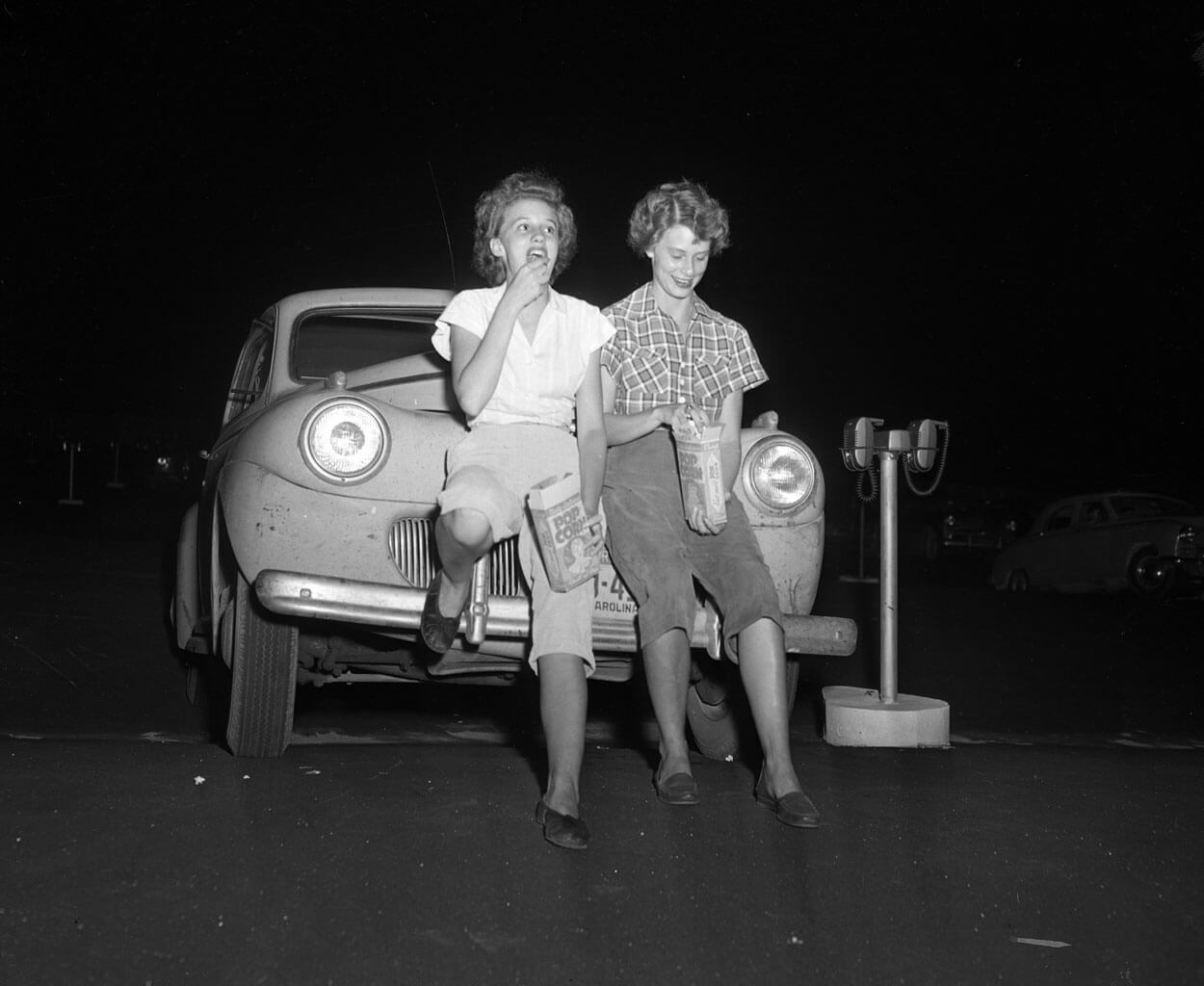 The Forest Drive-In hosted bingo and pig races and even had a merry-go-round, but it was best known for showing feature films suitable for the whole family. At intermission, moviegoers could get popcorn and a Pepsi to enjoy on the hood of their cars. photograph by State Archives of North Carolina

The first drive-in movie theater opened in Camden, New Jersey, in 1933 — the brainchild of Richard Hollingshead, general sales manager of his father’s auto products company. Hollingshead set out to invent a new business that would make his fortune. As he put it, he “analyzed the market from the standpoint of what people gave up last. It came out this way: Food. Clothing. Autos. Movies. In order.” Even in hard times, Americans stubbornly attended the moving pictures.

Hollingshead also investigated why some people didn’t go to movies: “The mother says she’s not dressed; the husband doesn’t want to put on his shoes; the question is what to do with the kids …”

Before opening the Camden Drive-In, he experimented in his own backyard, mounting his 1928 Kodak on the hood of his car and projecting movies onto a screen nailed to a tree. He simulated bad weather with a lawn sprinkler and even hit on the need to raise the front wheels of cars so that each provided a windshield view of the screen.

Only a handful of open-air theaters — known as “ozoners” — operated throughout the 1930s. But the idea catches on with the automobile boom of the 1950s, when more than 4,000 drive-ins provide family entertainment on big screens around the country. In 1948, North Carolina supported just 66 ozoners. By 1958, it has more than 200.

Because the movies are shown outdoors, where any passerby can see them, they typically feature wholesome, light titles suitable for children as well as adults, usually a double feature — with a long intermission during which animated trailers encourage viewers to visit the concession stand. A poll of drive-in owners finds that the most popular films are westerns, closely followed by action films, comedies, and musicals. The open-air movies are especially popular in suburban and rural areas, where land is cheap and abundant and indoor theaters are scarce. And many patrons cite the health benefits of being outdoors in fresh air and keeping their children safe from infectious diseases, like flu or measles, that are easily passed in crowded indoor spaces.

Small drive-ins accommodate as few as 50 cars; the largest can hold two or even three thousand. Some feature playgrounds, horseshoe pits, and miniature golf to encourage families to arrive long before showtime and spend more money at the concession stand, where a box of plain popcorn typically costs just 10 cents — 20 cents with butter. 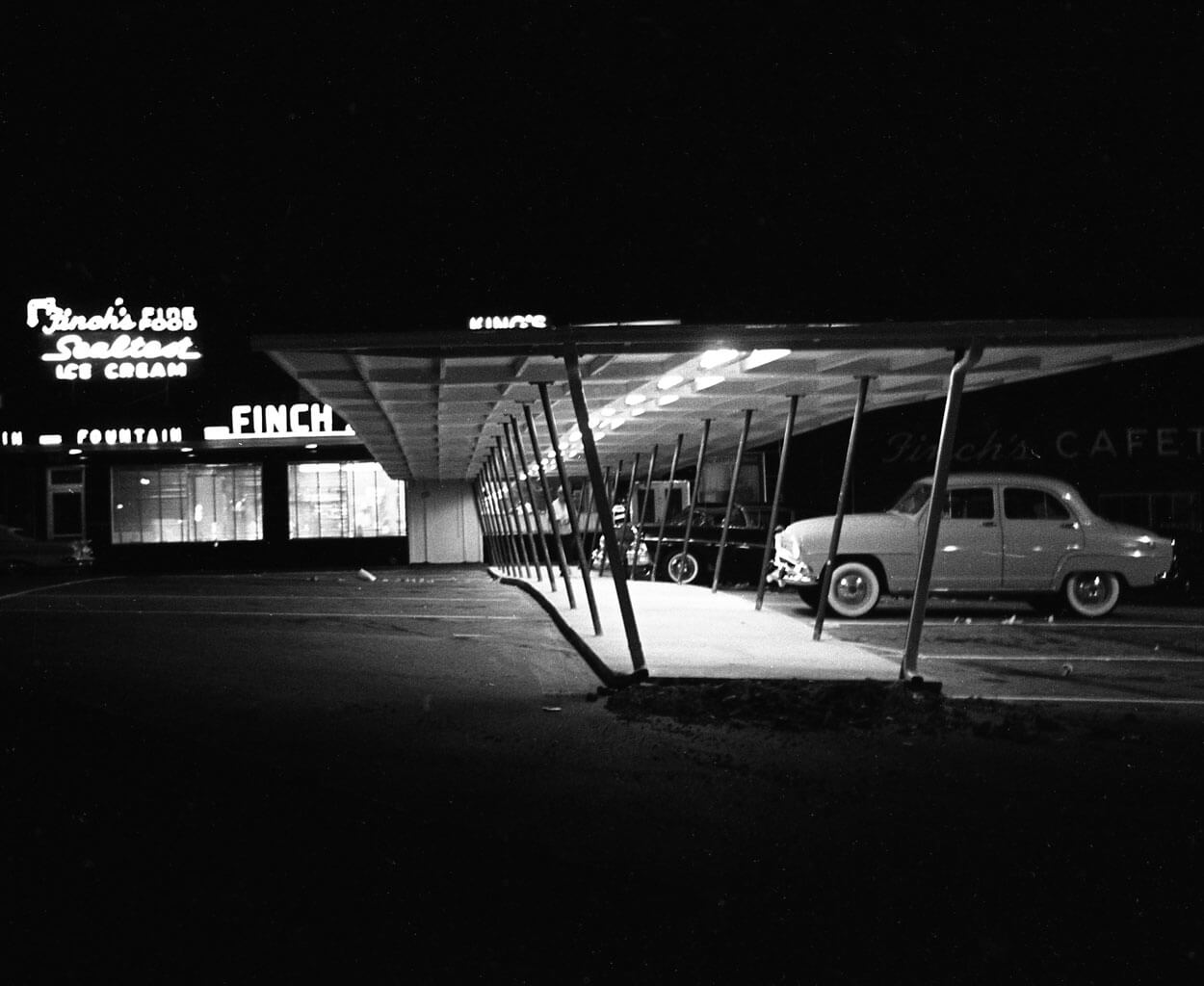 Finch’s Drive-In opened on Peace Street in Raleigh in the 1940s. The burgers, milkshakes, and “chicken boxes” — served curbside — proved so popular that the drive-in soon became a cafeteria. photograph by State Archives of North Carolina

In Rockingham County, the Eden Drive-In advertises a capacity of 200 cars. In Nakina, in Columbus County, The Twilite holds just 60. Albemarle offers the Badin Road; Hickory, the Thunderbird; Raleigh, the Tower and Forest drive-ins; and Bessemer City, the Kings Mountain Drive-In.

In Durham, the concession stand at the 300-car Starlite Drive-In offers — in addition to the usual popcorn — bug repellent coils, pickles, eggs, and hot sausage.

Drive-in culture is a wholly American venture, conceived in mobility and dedicated to casual comfort.

At the Park Drive-In in Greensboro, patrons can order through the audio speaker from a menu provided at the gate and have the food delivered right to the car. On a good night, a drive-in can make up to 40 percent of its box office gross from food concessions.

At the drive-in movie theater, patrons sit under the stars in a field of automobiles and enjoy their dinner out.

Wilmington is home to at least four drive-ins: the Star Way and the Skyline on Carolina Beach Road, the North 17, and the Wrightsville Road. Jessiebeth Geddie (née Brady) remembers date nights at the Wrightsville with her future husband, John, in his white Plymouth Savoy with rocket tailfins. “You had to hook the speakers on the side window, and we had a little coil that would keep mosquitoes from eating you alive,” she recalls. “Usually you carried popcorn and bottle Coke with you.”

Most drive-in theaters are gone now, but a handful still offer the classic experience of spring and summer nights past.