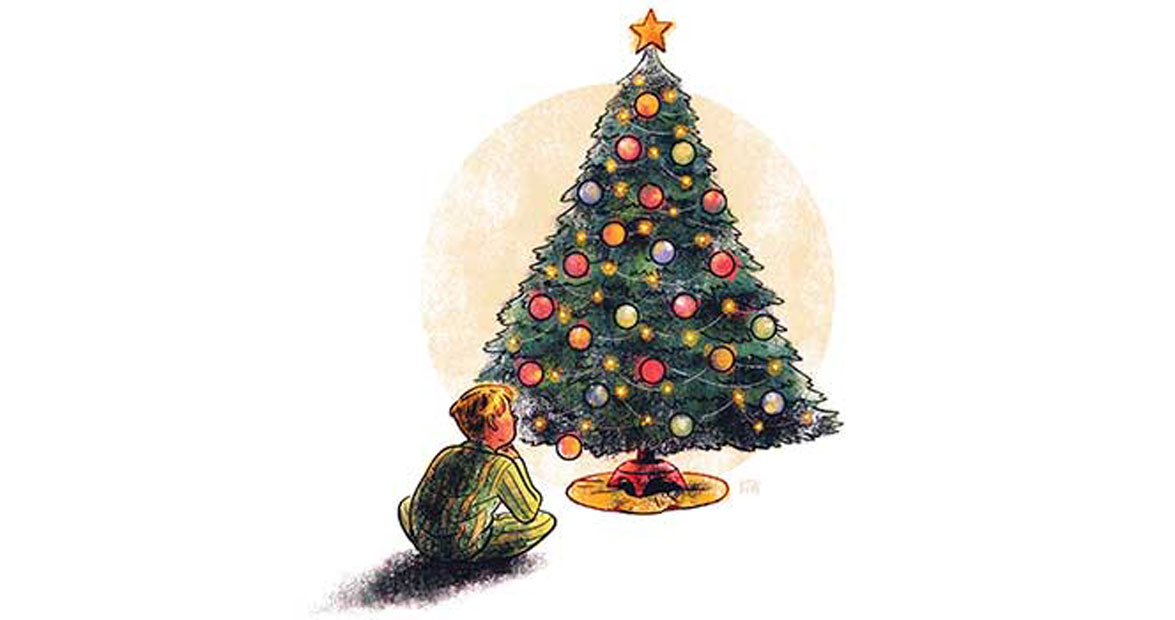 EDITOR’S NOTE: This story was published in December 2015.

For December’s issue of Our State, I wrote about a particularly traumatic Christmas experience:

I neglected to secure a Fraser fir to the wall, and it came crashing down. The biggest casualty: A pink, 1960s-era ornament with “Merry Christmas” on it, which had been passed down from my grandfather to my dad to me. For years, it was proudly featured on Grandpa’s rotating aluminum tree, a shimmering facsimile of some sort of pine, lit by a bulb that shone through a rotating circle of color. It was about as space-age as a tree could get, and obviously fake, so an otherworldly pink ornament was perfect for it. After it broke, every subsequent tree I bought felt empty.

Not to worry! My dad had another one and gave it to me, and this Christmas, the pink ornament hangs prominently on a Fraser fir that’s latched to the wall with piano wire. Just try and fall, tree. Come on. I dare you.

The ornament, I’d figured, was fairly rare. But after the magazine went out, I started getting emails, and pictures:

“It has passed down to me, and 60 years later, although none the worse for wear, I hang it every year right up front for all to see,” wrote Catherine Loveland.

A week later, I got an email from Nancy Joyner of Charlotte: “I knew I had the same old beloved ornament like the one that broke, before I even got my ornaments out.”

Turns out, there was a time when nearly every Christmas ornament on American trees came from Germany. In the run-up to World War II, one of the guys who imported them, Max Eckardt, saw trouble brewing in Europe, and in 1937, created his own ornament-making company. He got the glass bulbs from Corning, and had them hand-painted and stenciled at his factories in New York and New Jersey. The company’s name, Shiny Brite, was appropriate. The insides and outsides of the glass were coated with silver nitrate, making them shiny. And bright.

In 1939, when Germany declared war, it became illegal to import nearly anything from that country, and Shiny Brite’s business boomed. At one point, Corning cranked out 300,000 glass bulbs a day. After the United States entered the war, silver nitrate and metal became harder to get, so Shiny Brite replaced the tops with cardboard, and the ornaments became a little less shiny and a lot more see-through. After World War II, Shiny Brite became the largest ornament company in the world, and sold millions of ornaments at Woolworth’s for just a few cents apiece. It also capitalized on patriotism; For a time, Shiny Brite ornaments came in a box with an image of Uncle Sam shaking hands with Santa on the front.

My dad figures my grandparents bought our family’s pink ornament sometime between 1952, when they got married, and 1956, when a picture shows it hanging from my grandpa’s tree. And the fact that my dad had a backup ornament should have clued me in that the thing wasn’t as rare as I thought. The only identifying mark was stamped into the metal top: SHINY BRITE, MADE IN U.S.A.

What eventually killed Shiny Brite? One word: Plastics. In the 1960s, cheaper and more durable ornaments were produced for a brand new invention: the artificial Christmas tree. Glass felt retro, and in the 1960s, retro was just plain old. The company was sold to Polaron in the 1970s, and shut down in the 1980s. There are replica Shiny Brites out there now, made by Rauch Industries in Gastonia, but the originals are readily available on eBay, Etsy, and in antiques stores. Which means if my tree somehow breaks free from its shackles again, I’ll know where to get a replacement.